What's On in Rome in September 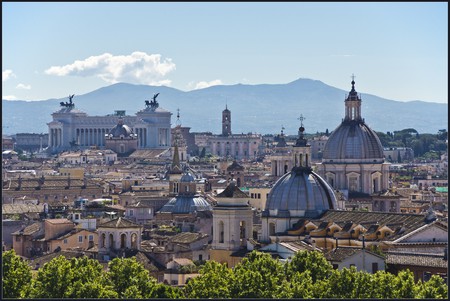 With autumn around the corner and Romans returning to the city after their summer exodus, September is a great time to experience the city at its most vibrant. Catch the tail-end of summer events, including outdoor film screenings and concerts, and pay a visit to annual festivals and newly opened exhibitions.

The Isola del Cinema music festival which takes place each year on Rome’s Tiber Island screens Italian and international movies throughout the month of August. This outdoor cinema, located on the banks of the Tiber River, is a beautiful place to catch a flick. See the full calendar of screenings online.

CONCERT | Listen to indie in an outdoor garden

Catch American indie band Clap Your Hands Say Yeah live at Monk Club on Friday. Located in Pigneto, Monk is one of the city’s best spots for live music and alternative cultural events in Rome.

THEATER | The Merchant of Venice

The Silvano Toti Globe Theatre inside Villa Borghese is a replica of The Globe Theatre in London with stellar performances. See a performance of The Merchant of Venice (Il Mercante di Venezia) translated into Italian for a peek into this fascinating theater.

📅 Saturdays and Sundays through December 31st, 2017

Located in Piazza Venezia, the Palazzo Venezia museum is often overlooked by tourists and contains a lovely hidden courtyard within it that plays host to a number of events in the summer months. On Friday, attend a concert featuring Nicola Piovani, famed Italian pianist and theater and film composer, accompanied by a small orchestra.

Lanificio is a woolen mill-turned restaurant and nightclub with a rooftop garden in Rome’s Pietralata district. Each summer, Lanificio hosts a festival of sorts on its roof with DJ sets, live music, a cocktail bar, barbecue and more.

Scuderie del Quirinale, originally the Papal Stables, are now used as one of Rome’s premier exhibition spaces. This autumn, the Scuderie del Quirinale museum is hosting an exhibit dedicated to prolific Spanish artist Pablo Picasso titled “Between Cubism and Neoclassicism: 1915 – 1925”. The exhibit will feature 100 works that were created following Picasso’s three month trip to Rome, alongside writer Jean Cocteau, in February 1917.

The 4th edition of the Live Cinema Festival will take place at the Via Nizza branch of the MACRO, Rome’s contemporary and modern art museum. A number of innovative audio-video performances will provide commentary on the role of technology in today’s world.

An annual appointment for foodies in the Eternal City, the 6th edition of the Taste of Rome trade show will take place once again at Auditorium Parco della Musica in north Rome. 15 chefs from Michelin starred restaurants will create 60 dishes for guests to taste and a number of workshops will take place.

Tickets: €16 entrance, then by consumption

Designed by the late architectural star Zaha Hadid, the MAXXI – Italy’s National Museum of 21st-Century Arts – has put Rome on the map for contemporary art and architecture. The current exhibit on Zaha Hadid’s Italy highlights the architect’s relationship with the country and the works she created there.

SHOPPING | Shop with the Hipsters at MercatoMonti

Spend an afternoon perusing vintage, design and artisanal wares at the MercatoMonti, where you’ll find everything from trinkets and second-hand purses to furniture and works of art made by local artisans.

The seventh edition of the Think Green Ecofestival will take place near Rome’s Appia Antica Park. The festival aims to promote sustainability and is a fun event for the whole family: it offers numerous walking tours, arts and crafts workshops for kids, an artisan market and more.