What the Pope Did with His New Ride, a White and Yellow Lamborghini 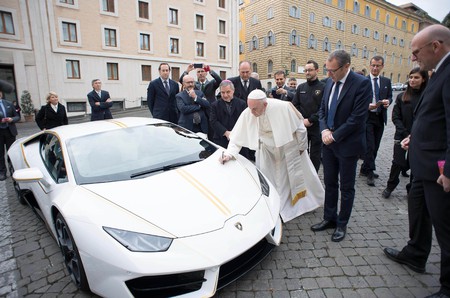 The famously frugal Pope Francis has a brand new ride – a special edition Lamborghini Huracan with a bespoke Vatican-coloured white and yellow paint job. However, His Holiness won’t be taking the brand new supercar for a spin around the grounds of the Vatican – choosing instead to auction it off for charity.

The V10 supercar was given to Pope Francis by luxury car manufacturer Lamborghini in a ceremony that took place last week outside Casa Santa Marta – the Pope’s residence within Vatican City. The Pope blessed the car and signed its bonnet – an action likely to increase its value when it goes to auction at Sotheby’s in May 2018.

Proceeds from the auction will be donated to three charitable organisations supported by the Catholic Church. This includes a fund to help rebuild homes and churches in the Nineveh Plains in Iraq, where Christians have been forced to flee from IS militants. 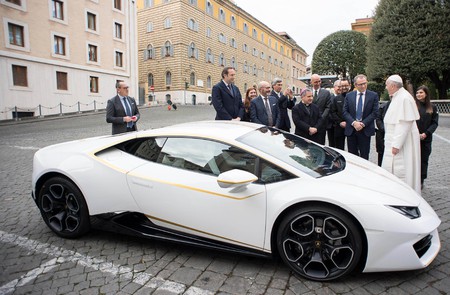 As well as helping displaced Iraqi citizens, the funds will go towards fighting human trafficking and prostitution, and towards aid for women and children across Africa.

The Lamborghini Huracan typically sells for around €200,000 (£177,256), but this one-off version, complete with gold racing stripes, is expected to sell for significantly more.

A similar model of Lamborghini boasts a V10 engine, dual-clutch transmission, a top speed of 201 mph and can do 0-62mph in 3.2 seconds – not so practical for getting around Rome’s maze of cobbled alleyways and traffic-filled streets. 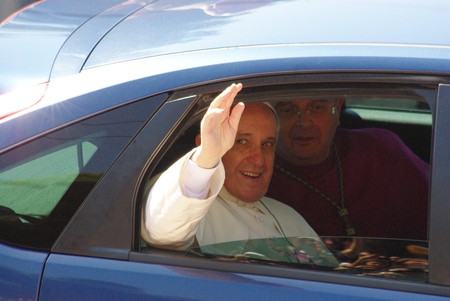 Instead, Pope Francis prefers to travel in an ordinary Ford Focus, shunning the luxurious papal limousines of his predecessors and urging church leaders not to drive fancy cars. His preference for a frugal lifestyle is well publicised; he foregoes the long summer holiday at Castel Gandolfo usually enjoyed by Popes, and has refused other luxuries like use of a gold chair and red Prada shoes.