Vision of the Future: Inside Renzo Piano's Genoa 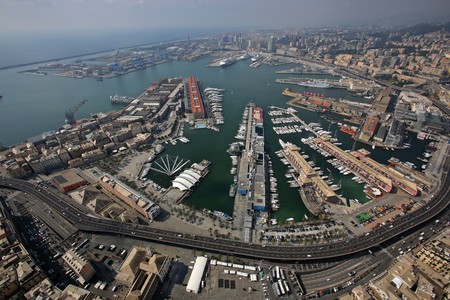 Renzo Piano spent his childhood in Genoa, from where he has also drawn his architectural inspiration | Courtesy of Stefano Goldberg / © RPBW

Renowned architect Renzo Piano was born and raised in Genoa, and today his influence and inspiration can be seen throughout the streets – here’s where to find his work in this beautiful city. 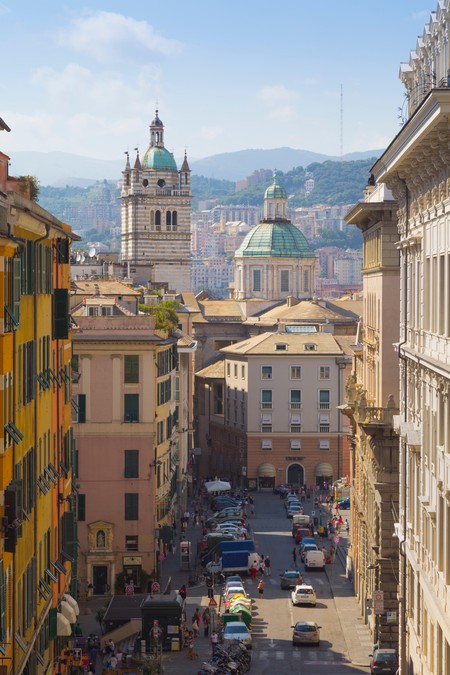 Genoa is where Renzo Piano was born, and the port is a testament to his work | © Classic Image / Alamy Stock Photo

You’re never further than moments from the sea in Genoa; just a narrow strip exists between it and the mountains, down which buildings seem to tumble – like sweets, with their pastel hues – stopping short at the industrial tones of the harbour.

It’s in this port that globally acclaimed architect Renzo Piano spent his weekends as a child, accompanied by his father – a builder, and the man he credits for his love of craftsmanship. Born in the Ligurian capital in 1937, Piano says, “I don’t remember a single thing in my childhood that was not related in some way to building,” even the ships in the harbour were, to his young mind, like “immense buildings” in a city where everything was in motion.

“I regard him as one of the most sculptural of architects,” says Hugh Pearman, architecture critic and editor of the RIBA Journal, London. “It is significant that he is the son and grandson and nephew of builders. He has always been fascinated by the making of things, by how component parts fit together – it’s why his firm is called The Renzo Piano Building Workshop.” 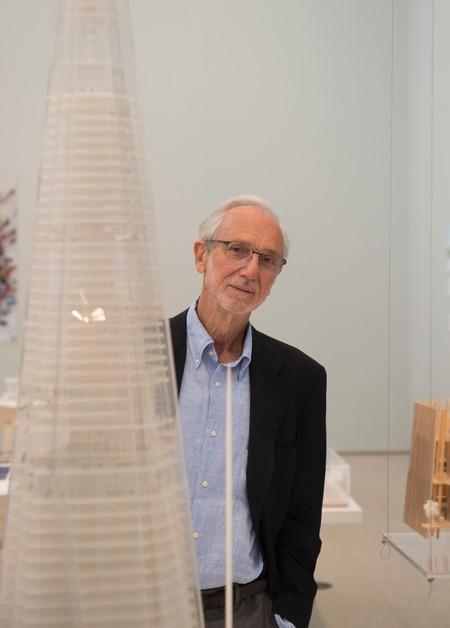 Piano was the designer of London icon The Shard, and is acclaimed around the world for his work | © Malcolm Park editorial / Alamy Stock Photo

From his first big coup in 1971, Paris’ Pompidou Centre – a commission he won, along with Richard Rogers RA, over 680 others – to London’s Shard and New York’s Whitney Museum of American Art, Piano, now in his 80s, has transformed skylines and cityscapes, inspiring architects and designers in what it is to create urban structures that are both striking and ultra-functional. “Although at one point, when he was in partnership with Rogers, you could have defined him as a ‘high tech’ architect, I would say that since then he has successfully evaded classification,” says Pearman “He does not have a ‘house style’ as some architects do; he is always capable of surprise.”

Even so, many instances of his work have been indelibly marked by these formative harbourside memories, drawing on nautical themes and marked by ‘lightness’, both as a physical and spiritual concept. Most memorable of these are the changes he has made to the waterfront, which was revitalised by Piano for Expo 1992, a year that coincided with the 500th anniversary of the first departure to the ‘New World’ by Columbus, another of the city’s success stories.

The waterfront was once divided from Genoa’s old town – a maze of cobbled alleyways dotted with tiny storefronts and strung with laundry – by iron gates. Today, these gates remain permanently open, physically connecting the city with the sea on which its fortunes were made, and the waterfront is a bustling public space, thronged with cafés and restaurants, and much beloved by visitors and Genoese alike.

It’s remarkable that an architect of such international renown has left – and continues to leave – such a mark on the city that spawned him: these are some of the magnificent additions Piano has made to Genoa.

Europe’s largest, the aquarium was opened in 1992 and blends seamlessly with its surroundings. Complete with funnels and portholes, it looks like nothing more dramatic than a liner or large shipping container. The real drama takes place within, where creatures of the deep glide eerily behind vast glass panes. A glass-walled building gazing over the sea was added in 1998, followed by a new cetaceans pavilion in 2013, its intuitive design comprising seven levels, yet rising just three metres (10ft) above sea level – a testament to Piano’s insistence that views of his beloved city and old port should remain unobstructed. 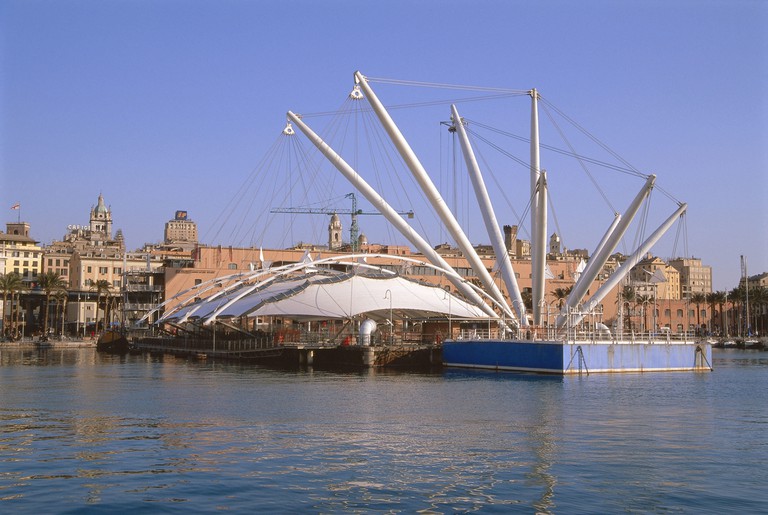 Also occupying a position at the waterfront, this panoramic lift – a sculptural octopus of eight arms extending diagonally skywards – is inspired by the structure of the loading cranes of old-time cargo ships. The lift slowly ascends the cable that runs up its side, taking visitors to a height of 40 metres (131ft) and, over the course of two gentle rotations, offers 360-degree views over the city. Cables from the arms support the roof of a marquee that, season depending, doubles as an auditorium and ice rink. 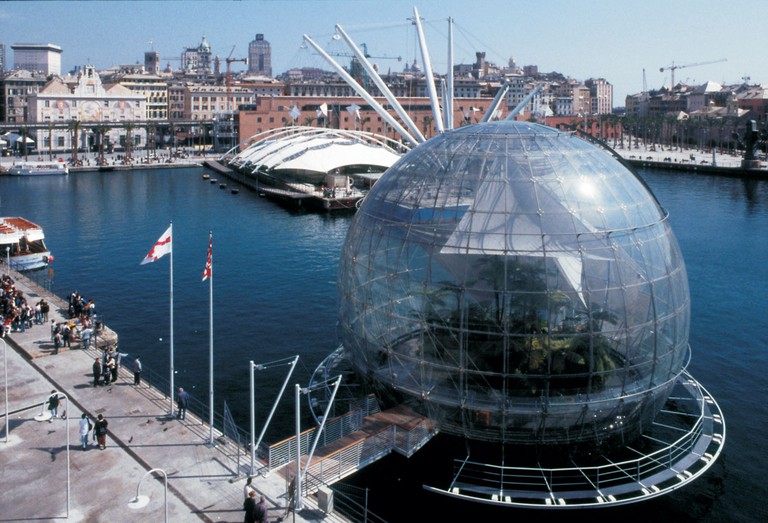 Positioned at the water’s edge, this multi-panelled ball of glass and steel was designed by Piano for the 2001 G8 meeting. Nicknamed ‘La Bolla’ (the bubble) by locals, the elegant curves of its 20m-diameter frame form a delicate contrast with the industrial lines of the Aquarium, which sits just opposite – and, rather than housing marine life, its warmth-filled globe is home to a lush tropical garden, among which exotic species flit and scurry. Strikingly otherworldly, it typifies Piano’s application of lightness and grace to structures both large and functional. 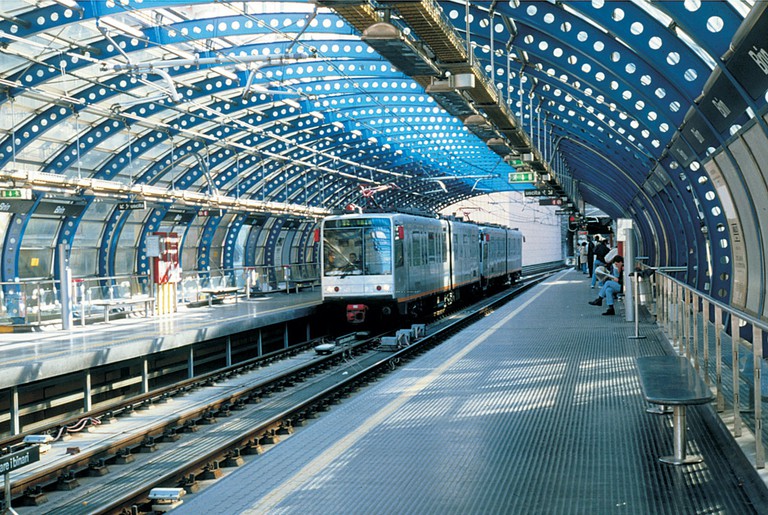 Genoa’s Metro is surprisingly dinky, considering the city is Italy’s sixth largest: it consists of just eight stops along one line of 7.2km (4.5mi) in length. Five of these stops – Brin, Di Negro, Principe, Darsena and San Giorgio – were designed by Piano and ably demonstrate the extent to which his offerings to his beloved hometown have been as quotidian as magnificent. His recognisable creation of graceful spaces, employing clear panelling, light, curves, arching girders and soothingly tactile materials all come into play – and all in a context through which crowds of native Genoese pass each day. 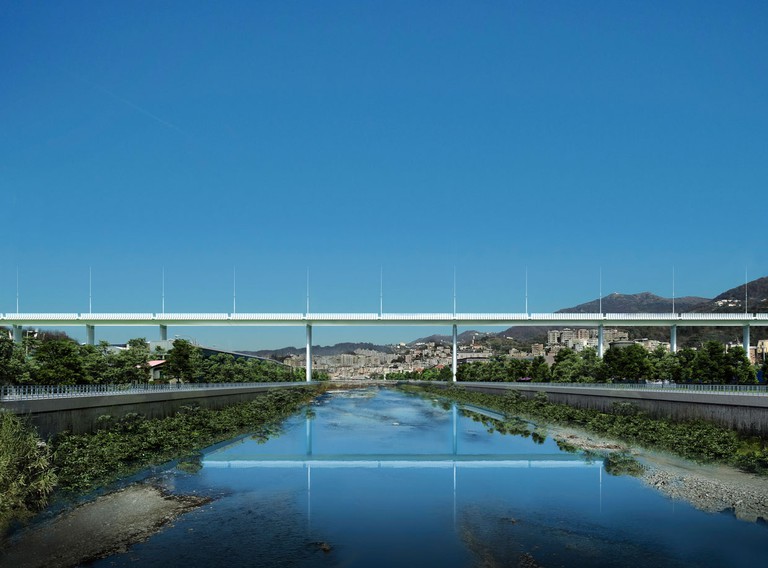 After a 200-metre (656-foot) stretch of this bridge collapsed in 2018, killing 43 and leaving more than 600 homeless, Piano came forward to offer – without fee or profit – a new design, a bridge combining function with the symbolism of remembrance and hope. “It must be a place where people can recognise the tragedy in some way,” he said at the time, “while also providing a great entrance to the city.” With nautical elements, “because that is something from Genoa,” the bridge includes 43 lamps – one for each victim – casting sail-shaped light on its long white beam, supported by elliptical piers resembling the bow of a ship. With perhaps more than a passing reference to political borders and division, he said, “A bridge is a symbol and should never fall, because when a bridge falls, walls go up. Walls are bad, we should not build walls; but bridges are good, they make connections.”

Restored by Piano in 2008 to become the home of the Renzo Piano Foundation, Villa Nave lies just west of Genoa’s centre. Holding archival sketches in their thousands, the ground floor room has walls plastered in visuals, including sketches rendered in Piano’s signature green ink, all of which can be viewed by the public on the two Saturdays each month when the building is open for guided tours. Less accessible, but visible from the Foundation, is Piano’s Genoa workshop, the counterpart of those in Paris and New York, which is built in a style inspired by Ligurian greenhouses. Surrounded by lush planting, it features an abundance of glass and angled roofs sloping gradually down to the water.

‘How Genoa Could Be’

Museum
Facebook
Email
Twitter
Pinterest
Copy link
Share
At Genoa’s Museo del Mar – maritime museum – where the city’s seafaring history and more recent significance as a cruise port are detailed, an installation called ‘How Genoa Could Be’ sets out Piano’s ambitious plans for his city, underpinned by a desire to “strengthen the role that Genoa has always had in Europe and in the Mediterranean.” The blueprint includes an artificial island, to be located out at sea, where Genoa’s airport will be relocated, as well as the creation of urban green spaces and the redevelopment of Sestri’s shipbuilding area.