Verona is a city of passions, famously known as the setting for Shakespeare’s Romeo and Juliet. Steeped in Roman and Renaissance heritage, Verona also boasts an equally rich contemporary art scene. An hour away from Venice yet undoubtedly within its cultural orbit, the city offers a more tranquil side of the Veneto. Verona’s art galleries and exhibition spaces connect Italian masters with contemporary virtuosos from Italy and further afield.

Named after its director Masha Facchini, the FaMa Gallery considers itself the ‘nexus’ of the Veronese art scene. The gallery bears a decade-long tradition of bringing together artists, collectors, curators and the public around exhibitions, panels and discussions. As much as FaMa seeks to connect the public with the art world, so does it strive to showcase both emerging and established artists. In 2011 the gallery inaugurated an auxiliary exhibition space called Basement. Basement hosts one resident artist annually who is given license to utilise the entirety of the space and to conduct research. FaMa Gallery has exhibited a wide range of artistic mediums from the sculptures of Marc Quinn, to the photographs of Mat Collishaw and the bio-installations of Enrico T. de Paris.

Founded in 1968, Galleria dello Scudo has its roots in fine Italian art of the first half of the 20th century. Recently, the gallery has also begun to pay tribute to contemporary Italian artists, such as Gianni Dessi, Giuseppe Gallo, Eliseo Mattiacci and Giovanni Frangi. Bridging the early 20th Italian masters and the contemporary art scene is the gallery’s fine collection of some of the most important Italian artists working since the 1950s, among them Burri, Capogrossi, Afro, Consagra, Manzoni, Scialoja and others. Galleria dello Scudo undoubtedly offers the best chronology of Italian art from the early 20th century up to the present.

Boxart boasts some of the most established names of Italian contemporary art from Mario Schifano to Emilio Isgro. Founded in 1995, Boxart’s first decade of exhibitions aimed at elevating both older and younger generations of Italian artists, highlighting the work of Sandro Chia, Marco Cingolani, Andrea Facco and Mauro Fiorese. In 2006, Boxart opened its doors to the Austrian artist Hermann Nitsch, as well as numerous Chinese artists who would also be exhibited at the Venice Biennale. In 2013, Boxart exhibited a retrospective of Emilio Isgro, two years after the artist’s monumental installation at the National Gallery of Modern Art in Rome on the occasion of modern Italy’s 150th anniversary.

Founded in 1969, Studio la Città relocated in 2007 to a spacious new location outside the city centre. The gallery’s new grounds are particularly adapted to large-scale works specifically created for the space, encompassing performance, installation, photography, video and sculpture. Studio la Città has exhibited a wide range of artists of different nationalities, with a particular emphasis on India. Minimalist sculpture, profuse yet simple installations, photography and sculpture are some of the strengths of Studio la Città.

La Giarina spans the courtyard of a stunning historical building dating from the 16th century. Though the lifespan of the gallery has been rather short in comparison to that of the building, La Giarina came into existence through an unusual exhibition on the cinematic art of Chantal Ackerman in 1987. From then on the gallery began to focus more broadly on contemporary art, collecting Italian and international artists among its ranks. Adding to La Giarina’s niche interests, the gallery has recently launched a thematic study of body language in the history of art.

Melepere revels in a delicate a muted aesthetic, excelling in unpretentious and thoughtful installation and sculpture since 2009. The austere yet homelike interior of the gallery does much to complement Melepere’s signature exhibits, which often gravitate around themes such as nostalgia, antiques and ephemera. The intimate, seemingly lived-in space of Melepere is a welcome alternative to the ‘white cube’ so typical of contemporary art galleries.

Perlini Arte specialises in artworks spanning many mediums yet all unified in their photographic nature. Whether through photorealistic painting, pencil or photography itself, the artists represented by Perlini Arte interrogate the relationship between the real and the representational. Though Perlini Arte boasts a core of Italian artworks, a few international artists are within its ranks.

Though focused on Italian painting of 19th and early 20th century, Galleria d’Arte Mercato has also hosted a number of contemporary art exhibitions in recent years. Galleria d’Arte Mercato presents another opportunity for the contemporary art enthusiast to simultaneously explore some of Verona’s renowned artists of the turn of the century, such as Angelo Dall’Oca Bianca, Luciano Albertini, Bonetti Agostino, Casati Bruno and Vitturi Ettore. 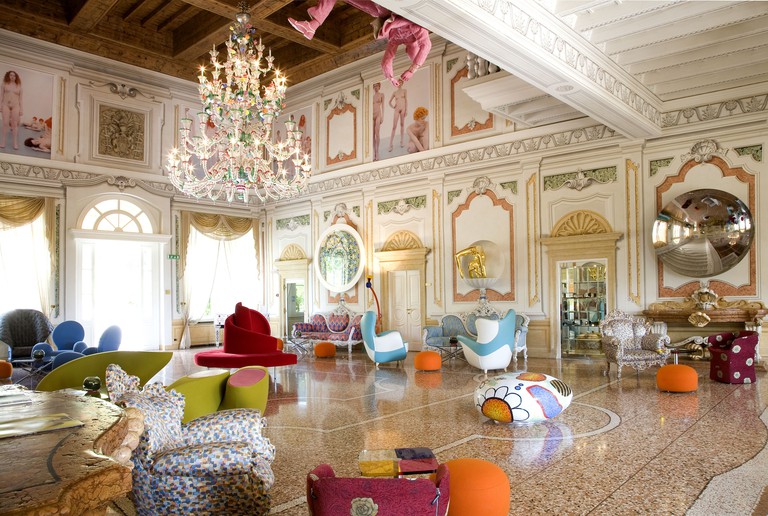 Courtesy of Byblos Art Hotel / Expedia
View Rooms
The Byblos Art Hotel transposes the gallery space into the fabric of everyday life in this luxurious villa hotel. Sharing the same management as the FaMa Gallery, the hotel remains undeniably plugged into Verona’s art scene. While the hotel’s sumptuous accommodations ensure an intimate art-viewing experience, one does not need to spend the night to appreciate the hotel’s numerous artists on display. The Byblos Art Hotel is furnished with a restaurant, spa, and even a chapel which can be rented out for marriages. The Byblos Art Hotel truly takes the gallery space to new levels without compromising quality or quantity of artwork: more than 30 artists are on display, including Marina Abramovic, Jean-Michel Basquiat, Damien Hirst, Anish Kapoor, Cindy Sherman and Sol Lewitt.
EVERYTHING YOU NEED TO KNOW

Museum of Modern and Contemporary Art of Trento and Rovereto

Museum, Library
Facebook
Email
Twitter
Pinterest
Copy link
Share
Map View
Though neither a gallery nor found in Verona proper, no survey of the city’s contemporary art scene would truly be complete without a visit to this museum just a short distance away in Trento in the town of Rovereto. The museum holds an astounding collection of more than 15,000 artworks and comprises archives, an educational program and a library. Inaugurated in 2002, the building’s architectural programme is in itself worth a visit.
Open In Google Maps
43 Corso Angelo Bettini, Rovereto, Trentino-Alto Adige, 38068, Italy
+390464438887
Visit Website
Give us feedback
Give us feedback