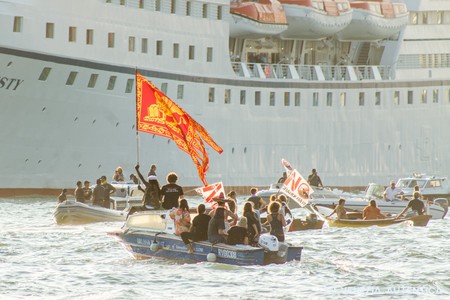 Venice may soon become a World Heritage in Danger site – only this time, the cause won’t be armed conflict or climate change, but tourism. It seems the apparently innocuous business of a little vacation might have serious impacts when ungoverned by far-sighted regulations.

Back in 2014, UNESCO’s World Heritage Committee made a list of recommendations to address gaping problems in the city’s management. That includes the creation of a sustainable tourism strategy, the regulation of the speed, number and type of boats entering the lagoon, the future prohibition of all oversize ships and tankers from entering the lagoon, and an environmental impact assessment for all large-scale construction projects.

An independent research commission was sent by UNESCO to Venice in 2015. The report issued was damning, stating that “the capacity of the city, the number of its inhabitants and the number of tourists is out of balance and causing significant damage.” The city receives over 25 million tourists every year. Meanwhile, its population is in steep decline, down to about 54,500 from 120,000 residents just four decades ago. The price of housing in the historic center is spiraling out of control as apartments are converted into profitable hotels and short-term rentals. As UNESCO says, “saving Venice means saving the Venetians.”

The Venetians themselves, on the other hand, have been onto the damaging effects of mass tourism for much longer, and activism often focuses on the issue of cruise ships. These boats of 300 meters in length displace huge amounts of water as they sail through the canal and damage the lagoon ecosystem and Venice’s fragile foundations. They’re also at the center of the grab-and-go travelling culture that’s changing the city. Their campaign has been ongoing for five years.

At the 2014 UNESCO meeting in Doha, Italy was warned that they had two years to take concrete action on these problems, or else find themselves with the embarrassment of having a city on the World Heritage in Danger list. Italy has 51 UNESCO World Heritage sites, more than any other country, and considerable influence within the organisation itself. The 2016 deadline passed with barely a discussion.

Anna Somers Cocks, founder of The Art Newspaper and former head of Venice in Peril, reports that both the World Heritage Center’s director Mechtild Rossler and the Italian ambassador exerted pressure in back-room negotiations to avoid the issue being raised. Jad Tabet of Lebanon was the only member to raise the alarm. “The reaction of our committee comes very late,” he says. “We should act at once and launch a new campaign for Venice, yet we are delaying again.” The Italian Culture Ministry, on the other hand, denies being aware of any government efforts to pressure UNESCO. Venice’s inclusion on the endangered list would be both a public shaming of governmental mismanagement and lead to closer monitoring of the city by UNESCO officials.

The vote has been delayed until this year, when the conference is set to be held on 2nd July. Last winter, Director-General Irina Bokova and Mayor of Venice Luigi Brugnaro met in Paris. A report was submitted which included Italy’s Pact for Venice, in which €457 million are promised to be spent on conservation efforts in the next four years. With these new steps, Italy hopes to sail through the 2nd July conference just as smoothly.

However, Venetians have not seen any changes in the air, after much lobbying, organising, and protesting. Last year, a protest saw thousands of Venetians gathered in the Giudecca canal. Many even took to the water in boats and wet-suits, trying to block the passage of the enormous cruise boats which dwarf the city. 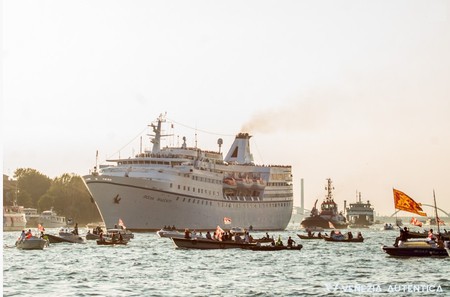 Brugnaro is an unabashed apologist for the cruise industry. Part of his plan for Venice includes a new excavation project that would take cruise ships to a new docking station away from Venice’s historic center. The estimated cost of the project is said to be €127 million. This not only goes against the 2014 recommendations of the World Heritage Committee to ban larger vessels from the lagoon, but also directly contradicts the concerns expressed about “the extent and scale of proposals for large infrastructure, navigation, and construction projects in the lagoon.”

“We are forced,” Luciano Mazzolin of Ambiente Venezia says, “after years of activism, after our ideas have been validated from every part, to chase after them and launch new campaigns to contest these absurd projects, which are incompatible with the lagoon of Venice.” On 18th June, Venice voted on a citizens’ referendum, which Tommaso Cacciari of No Grandi Navi calls a kind of deadline, or ultimatum. The event saw 18 thousand votes, with 80% coming from residents. The organisers themselves were surprised by the turnout. The landslide results showing that 98.2% hope to ban the cruise ships from the lagoon, as well as a stop to the excavation of new canals for big ships. This action hopes to gather momentum for 24th September of this year, when another large-scale protest is set to be held in Venice, with a national scope. Faced with a shortfall in international pressure, locals seem to have taken things into their own hands.