Top Reasons Why You Should Visit Taormina, Italy 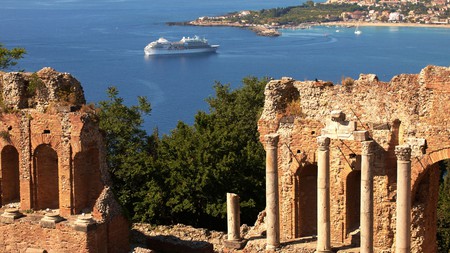 The Teatro Antico of Taormina remains a top tourist site in the town, not least for the sweeping views it affords | © funkyfood London - Paul Williams / Alamy Stock Photo

In the shadow of Mount Etna, the Sicilian town of Taormina offers a classic Italian blend of designer shopping, coastal views, ancient artefacts and beaches tailor-made for tanning.

One of the most beautiful small towns in Sicily, Taormina is a commune of the city of Messina that has been welcoming tourists for over 200 years – since the days of the infamous Grand Tour, when young bachelors would saunter around Europe’s early tourism hotspots. The town’s rich history, scenic views and close proximity to Mount Etna have long secured its place on the contemporary tourist trail, delighting guests with its winning mix of natural beauty, hilltop architecture, sumptuous seafood and ancient history.

Corso Umberto I is perfect for a promenade 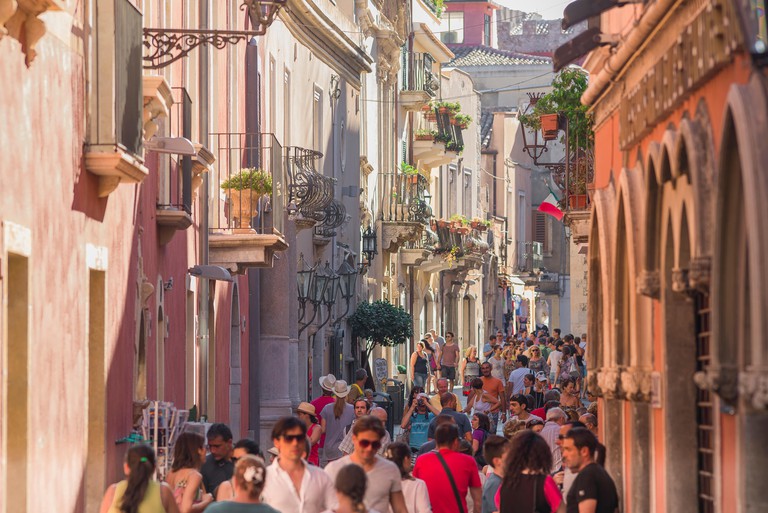 A stroll along this slender, busy street is best taken in the early morning or at dusk to avoid the heat of the day. Join the shoppers by taking the alley off Via Luigi Pirandello and head south down the pedestrianised Corso Umberto, which is lined with quirky boutique shops, cafes with bright, awning-protected terraces and unexpected churches. You’ll also wander through a couple of beautiful piazzas (squares) – the view-tastic Piazza IX Aprile and Piazza Duomo with its central fountain – before ending up at Porto Catania, the old city gate. 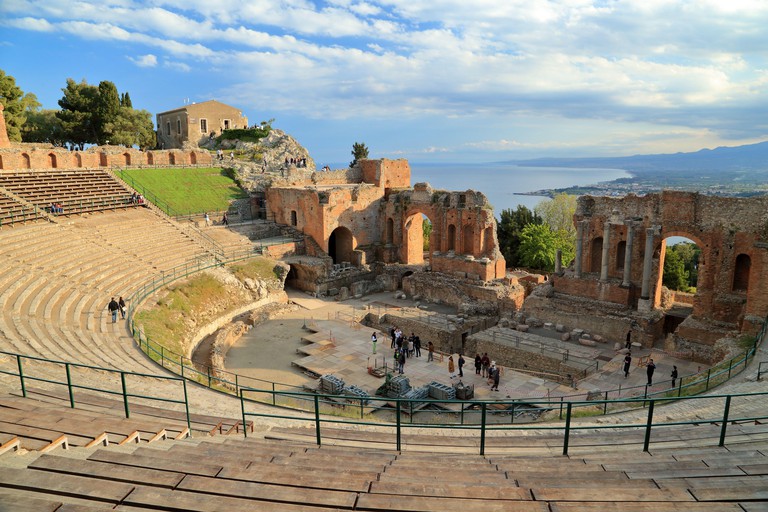 © Matthias Scholz / Alamy Stock Photo
You may find this Ancient Greek amphitheatre labelled as Teatro Antico di Taormina on your map, as antique it certainly is. Sicily’s second-largest theatre was built in the 3rd century BCE by the Greeks who used it to host dramatic and musical performances. It was enlarged by the Romans a few centuries later, who repurposed it for much grislier means, namely gladiator battles and sporting events. The view is absolutely breathtaking, with the Ionian Sea and Mount Etna providing a natural backdrop behind the stage.

Sicily is a notoriously fabulous destination for retail, with independent designers outweighing the standard high street names. Taormina is no exception, so give yourself time for some serious browsing. Be sure to swing by menswear store Dieffe for elegant, locally tailored shirts, shoes, hats and accessories; Kerameion for one-of-a-kind pottery pieces and ceramics by local artisans; or Pafumi, a wonderfully colourful, locally designed jewellery outlet that’s exclusive to Sicily. 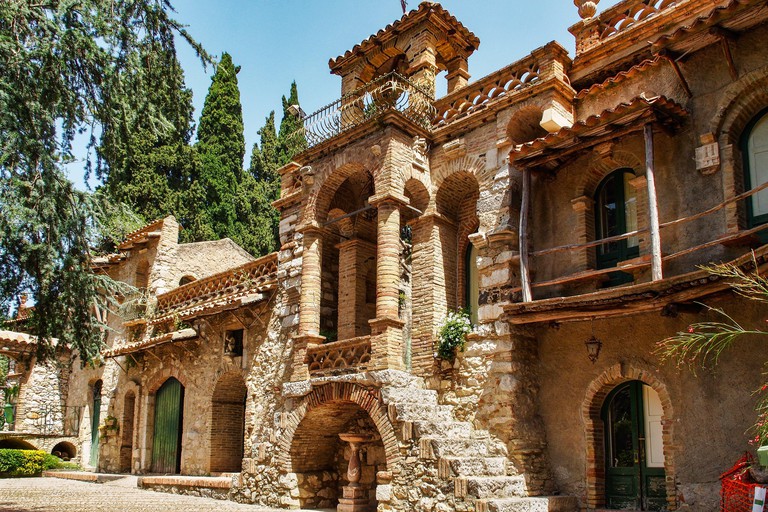 © Rudolf Ernst / Alamy Stock Photo
The sublime public gardens of Villa Comunale di Taormina (Trevelyan Gardens) were founded and originally nurtured by Lady Florence Trevelyan, a British socialite who moved to Taormina in the 1880s. While the views from the terrazza are some of the finest in town, and the flora and fauna planted by herself (particularly in the north end of the park) are enough to impress any horticulturist, it’s the follies (purposeless architectural structures) that are the real show-stopper, especially if Victorian kitsch is your thing.

You can walk across the sea to a nearby island 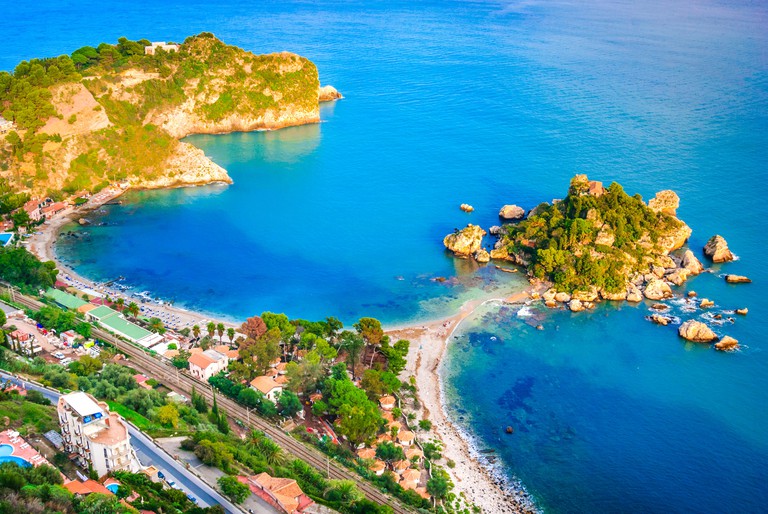 Another of Florence Trevelyan’s Taormina achievements is on Isola Bella – an island where she bought and developed a mansion and garden back in 1884. Public property since 1990, the island is now protected by Italian wildlife conservation laws and is best reached on foot from Mazzaro beach around the bay. You can take the scenic cable car down to the beach, which goes every 15 minutes every day until 8pm, from Via Luigi Pirandello – then walk across the narrow path that connects the beach to the island. Join in with the local sunbathers, who throw towels down on the rocky beach and swim around the surrounding sea caves.

The cuisine is beautiful

Sicily is known for its fresh and hearty cuisine, and you won’t go hungry in Taormina. Established in 1979, family-run Pasticceria Minotauro sells the best pastries in the city (some say, in the whole of Italy) as well as nougat, marzipan and chocolate treats to keep you going all day. For premier-quality, foraged and organic foods, head to Trattoria Il Barcaiolo down on Mazzaro beach – you’ll need to make a reservation to dine on sea urchin spaghetti and bread- crumbed sardines in this popular restaurant. Finish your evening with cocktails at Morgana, where world-class mixologists toss silver shakers in tropical-chic surrounds.

You can take a steep walk up to Castelmola 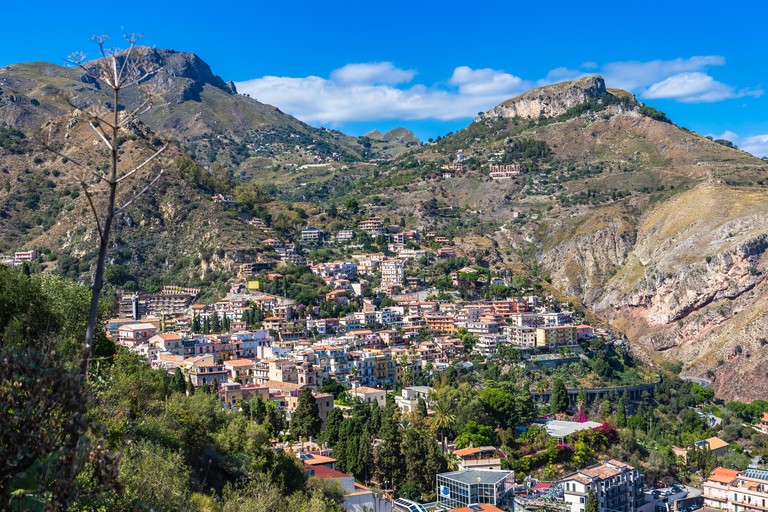 Not for the faint hearted, this hour-long walk to the hilltop village of Castelmola is pretty steep – but the brave will be rewarded with fantastic views and a selection of excellent cafes. Check out Cafe Turrisi for its quirky interiors (try not to laugh at the collection of phalluses) and tasty pizza, perfect for refuelling.

It’s got a lot to offer architecture lovers

Taormina is not just awash with medieval and renaissance buildings, but also home to some unusual gems. The humble cathedral, Duomo di Taormina, was built around 1400 CE in Gothic-Romanesque style. Behind its simple facade, the interior is chock-full of Sicilian Renaissance paintings in vivid oils. Go even further back in time at Porta Messina, the chunky city gate built by the Greeks. Then, the small cave church Chiesa Madonna della Rocca is unmissable. Built in 1640, it’s just a few steps from the Saracen castle up on Monte Tauro.

The best views are from Monte Tauro

Taormina is a vertically challenging town, built across multiple levels from the beach, up to the clifftop and hillside, so naturally has some of the finest views in Sicily. The Saracen castle that overlooks Taormina sits atop Monte Tauro and is only reachable by foot, the stairway path begins on Via Circonvallazione and winds its way up to the fortress which is sadly closed for visitors but is the spot for incredible views of the town and bay below.

Mount Etna is a day trip away 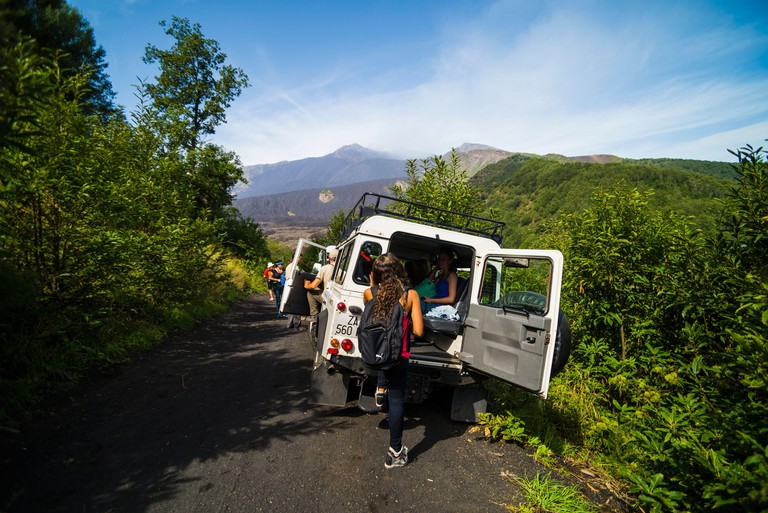 A trip to Sicily wouldn’t be complete without an excursion to its iconic and very much active volcano, Mount Etna. Taormina is in close proximity to Etna, which appears in the background of most good views across town, so of course there’s a fleet of tour companies waiting to take you there. All you have to do is choose from the myriad of tour options on offer, whether that’s for half a day or a full day, including a train ride around the mountain, hiking up the slopes or strolling to see recent lava.

Not sorted your Sicilian stay yet? Browse and book the best hotels on the island (or pick a place for the most authentic experience) through Culture Trip. Explore more of Sicily by spending time relaxing on its most beautiful beaches or, for the more adventurous, trying out its best hiking trails. For more in Taormina, plan your evening dining at the city’s best restaurants.