The Top Things to See and Do in Sicily, Italy 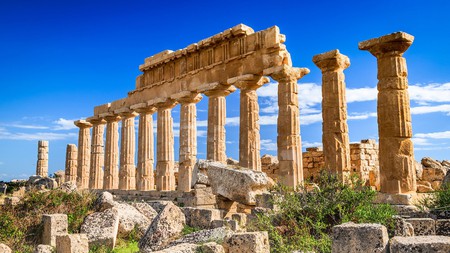 Sicily is the largest island in the Mediterranean, and there’s far more to it than its dubious status as the home of the Italian Mafia. It offers an incredible travel experience if you’re interested in history, science, good food, better wine – or just a beautiful stretch of beach. Here are 15 of the best things to see and do on the island.

Want to visit Sicily? Book TRIPS by Culture Trip’s 10-day adventure, where you’ll be able to bounce along Mount Etna in a 4×4, eat local cuisine and be guided through the ancient towns of Noto, Ragusa and Modica by our Local Insider. 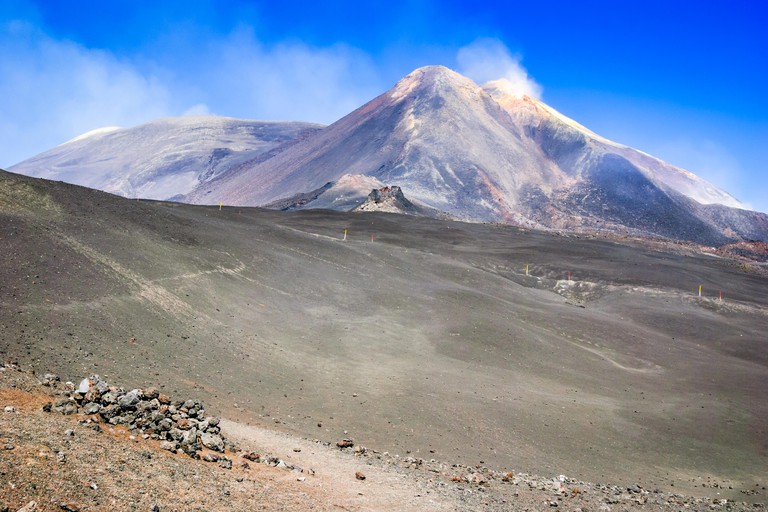 Ancient Greeks thought Mount Etna – the largest active volcano in Europe – was home to the Cyclops. Today, this destination, in the province of Catania, is a major tourist attraction. In the winter, you can ski down its peaks, while in summer, there are many hiking trails throughout the woods. If you’re looking for something more relaxing, you can take a cable car to more than 2,500m (8,202ft) above sea level to see sweeping panoramas. There are bus services that leave from Catania and a railway line to Riposto. 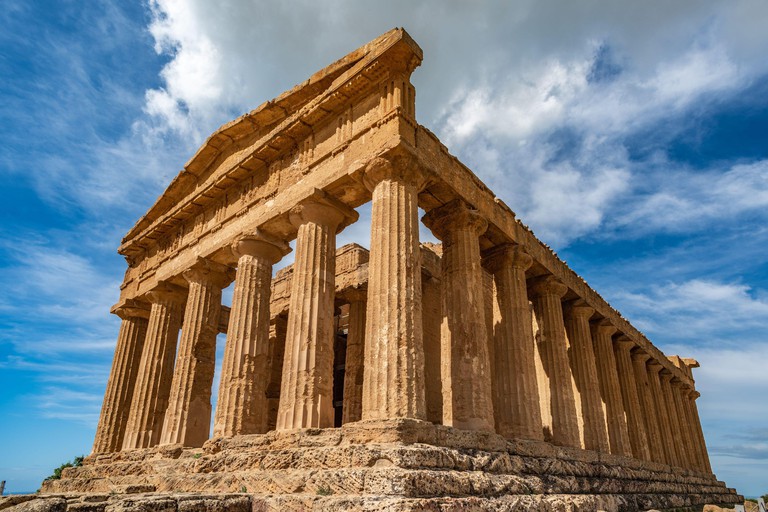 2AYBBG1 Temple of Concordia an ancient Greek Temple in the Valley of the Temples, Agrigento, Sicily, Italy. Image shot 07/2019. Exact date unknown. | © Zoonar GmbH / Alamy Stock Photo
Just outside Agrigento, Valley of the Temples is an archaeological park with remains from eight temples built between the fifth and sixth centuries BCE. Though all the edifices are notable, the Temple of Concordia is particularly important, due to its being one of the most excellently preserved Greek ruins in existence, even inspiring the six-column design of the Unesco symbol. The park, measuring about 1,300ha (3,212 acres), is the largest archaeological site in the world. 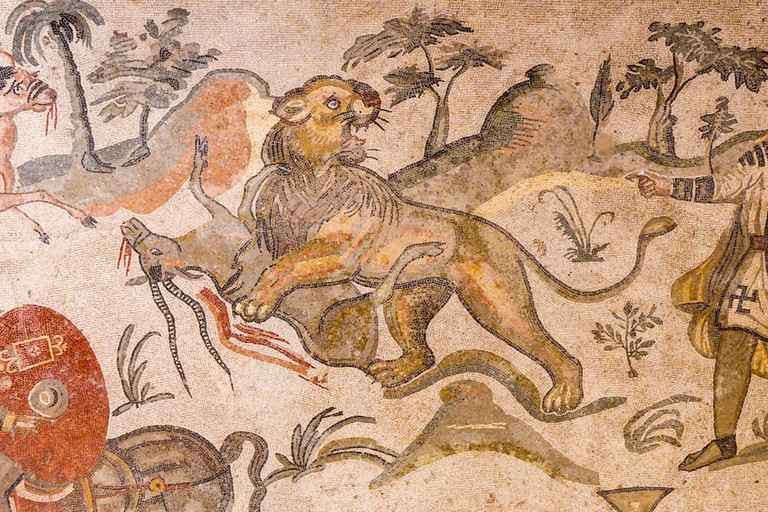 2BJKPK9 Villa Romana del Casale, Sicily, Italy, near the town of Piazza Armerina. | © "agefotostock / Alamy Stock Photo"
Villa Romana del Casale, built sometime during the fourth century, contains some of the best and most complex mosaics from the Roman Empire. A Unesco World Heritage site, the villa was abandoned in the 12th century, only to be made famous in the 19th century when some mosaics were unearthed. One of its most famous pieces is that of the bikini girls, excavated in 1959, which depicts women exercising and doing other sports. Daily guided tours are available. 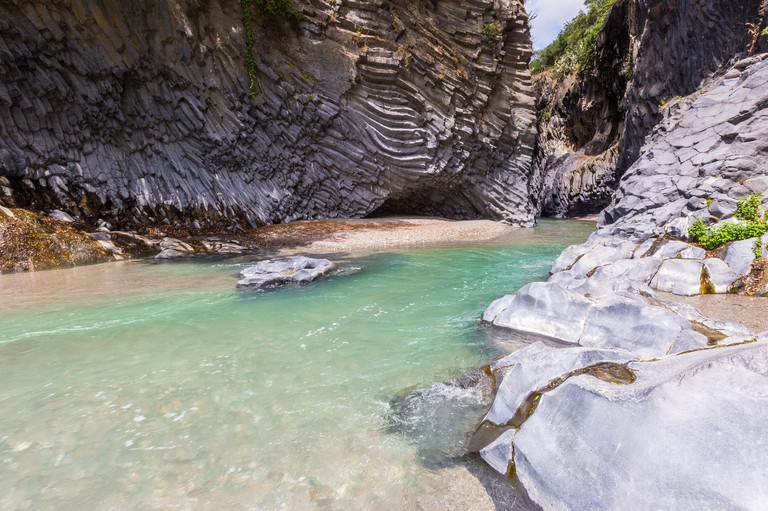 Created by waves of lava centuries ago, the Gole dell’Alcantara is a series of canyons located in the Gole Alcantara Botanical and Geological Park. Between the Messina and Catania provinces, the magma percolated along the Alcantara River, resulting in a number of horizontal and vertical configurations and some basalt walls as tall as 50m (164ft). If you want to know more, the park offers several excursions. 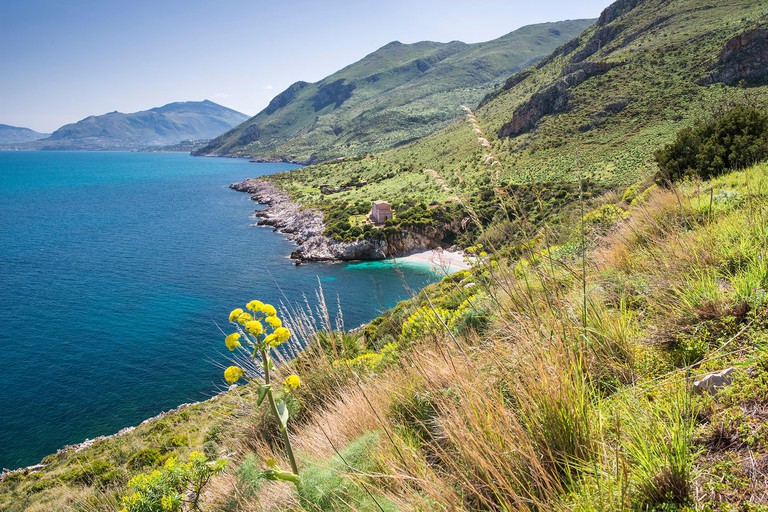 G6N8WF Italy, Sicily, Province of Trapani, Riserva naturale orientata dello Zingaro, Cala Tonnarella dell'Uzzo | © Westend61 GmbH / Alamy Stock Photo
The Riserva Naturale Orientata dello Zingaro, established in 1981, was the first nature reserve set up in Sicily and includes not only a mountain chain but also a sea coast stretching almost 7km (4mi). Nature lovers will appreciate the biodiversity, with several species of birds making their home here, while historians will enjoy the Uzzo Grotto, one of the first prehistoric settlements. Although the reserve offers many amenities, such as museums and paths, the park is only accessible on foot. 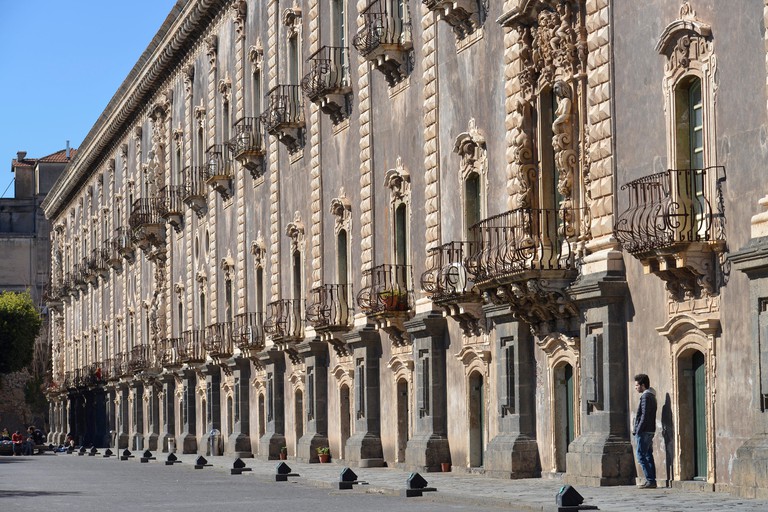 HY86P6 Monastero Tu San Benedetto, Catania, Sicily, Italy, Monastero di San Benedetto, Sizilien, Italien | © Bildagentur-online/Schoening / Alamy Stock Photo
Part of the Val di Noto Unesco World Heritage site, the Monastero dei Benedettini of San Nicolò is one of the largest monasteries in Europe and houses the University of Catania’s Department of Humanities. Guided tours are available of the cloisters, cellar, the Roman domus (house), the main altar of San Nicolò, the garden and other rooms designed by architects Vaccarini and De Carlo. There is also a special evening tour on the last Friday of every month that looks not only at the building’s history but also the city’s. 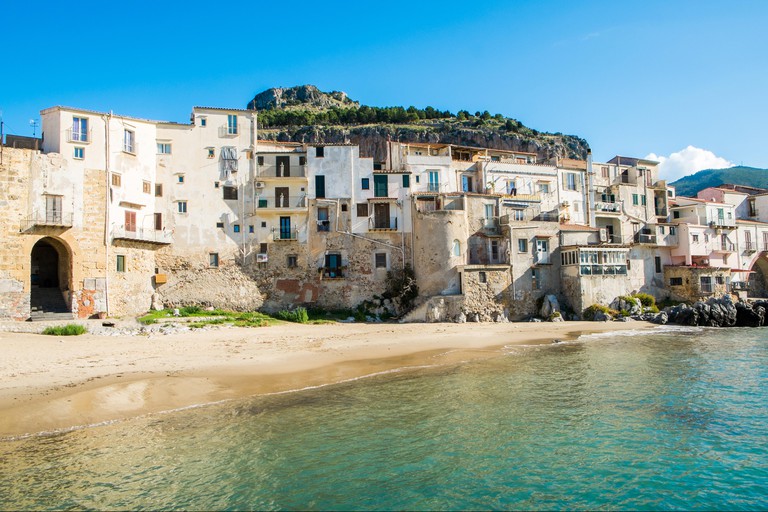 With a position nestled in the Mediterranean Sea and warm weather between May and October, there is plenty of time to explore and enjoy Sicily’s sandy beaches. Check out Cefalù, where Cinema Paradiso (1988) was filmed, or Taormina, which has a cable car that will take you to the lovely Mazzarò Bay, a WWF nature reserve. 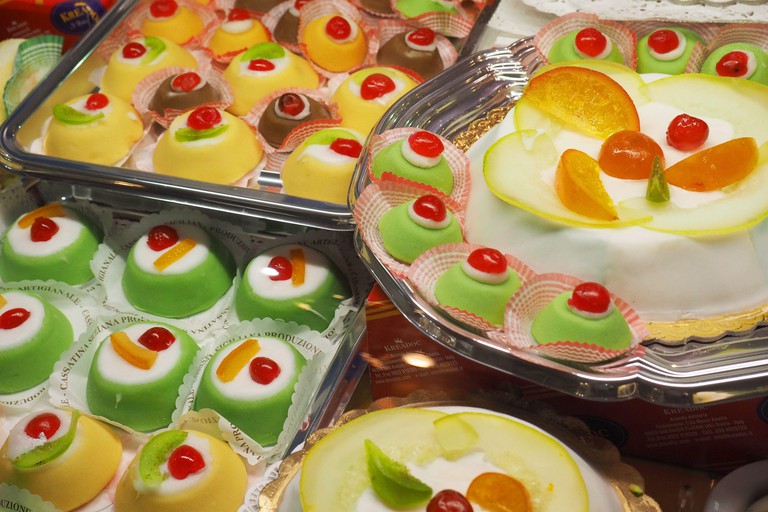 A trip to Sicily would not be complete without sampling some of the tastiest treats that Italian cuisine has to offer. Thanks to the many nuts and fruits found on the island, Sicilians have become famous for their delicious sweets, such as cassata siciliana (a sponge cake with rum, ricotta cheese and candied fruits) and cannoli (fried tube-shaped shells filled with ricotta and either candied fruits or chocolates). In the summer, look for home-made almond milk or granita (Italian shaved ice) made with fresh fruits or almonds. 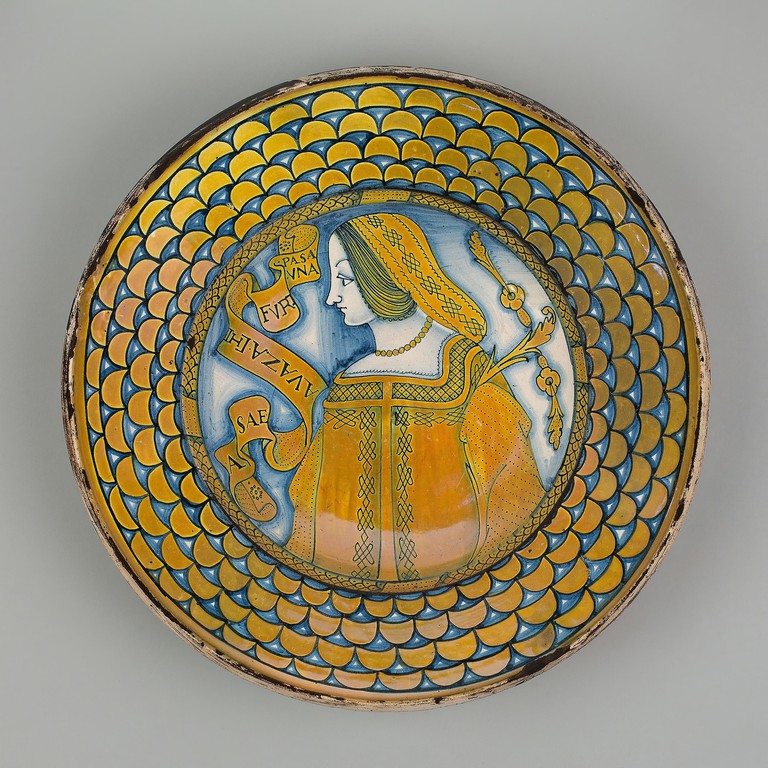 RX13FK Display Plate with Female Bust. Italian, Deruta. Date: 1515-1525. Dimensions: Diameter: 40.6 cm (16 in.), H: 8.9 cm (3 1/2 in.). Tin-glazed earthenware with copper luster. Origin: Deruta. Museum: The Chicago Art Institute. Author: Italy) Societa anonima cooperativa per la fabbricazione delle maioliche (Deruta. | © Album / Alamy Stock Photo
In Palermo, the Museum of Maioliche lies in the 17th-century Torre-Piraino Palace, once home to the Fernandez, Torre and Benso families. The renovated rooms show off restored majolica and murals. The majolica pieces are mostly of Neapolitan and Sicilian origin, with some dating back to the 15th century. To visit, make sure you contact the museum beforehand. 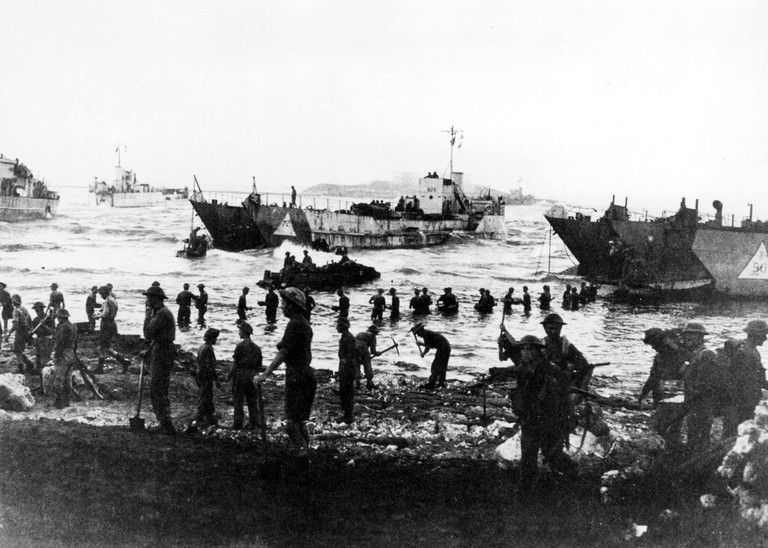 C456WK British troops land in Sicily, 1943 | © Sueddeutsche Zeitung Photo / Alamy Stock Photo
Museo Storico dello Sbarco in Sicilia offers comprehensive exhibitions about the historical moment that led to both Sicily and greater Italy’s liberation from the German occupation during World War II. On 10 July 1943, after landing on the east coast, the Allied forces began fighting to gain control over the island. The museum includes different artifacts to illustrate what happened during those battles. 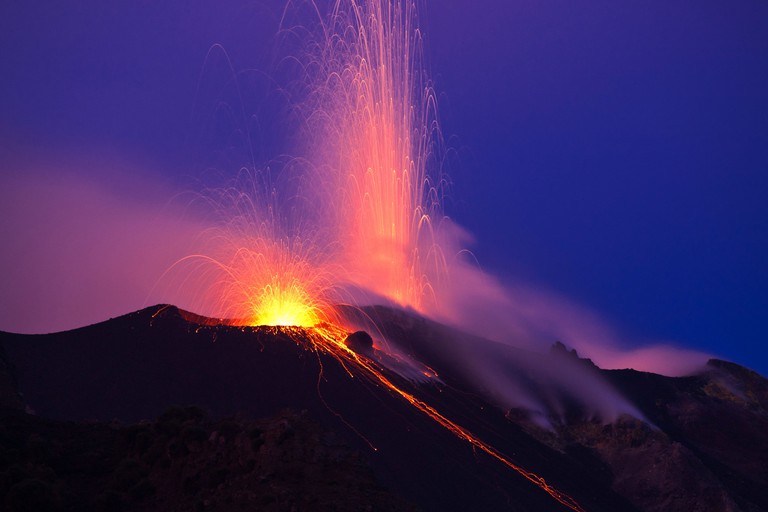 D2WB8K Lava eruption on the volcanic island of Stromboli in Sicily, Italy.. Image shot 09/2012. Exact date unknown. | © Peter de Clercq / Alamy Stock Photo
Just off the coast of Messina lies a collection of islands unlike anywhere else in Italy. The Aeolian Islands are a Unesco World Heritage site, and on arrival at Lipari, the most central of the islands, it’s easy to see why. The volcanic landscape is utterly otherworldly – you’ll feel like you’ve entered a science-fiction film. On the island of Stromboli, there is a volcano that has been in a constant state of eruption since 1932. It’s quite safe, and you’ll get to see it spewing steam into the sky. On Vulcano, you can find mud baths and thermal hot springs for a more luxurious experience. The islands also have plenty of places to eat and stay. 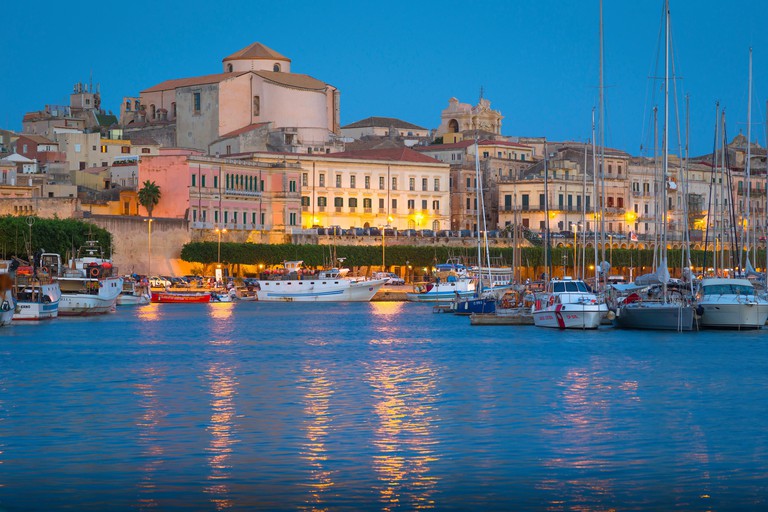 Siracusa is one of the largest cities in Sicily and famous around the world for its archaeological treasures. Many lie within the Parco Archeologico della Neapolis, including well-preserved Greek and Roman ruins, such as an amphitheatre and a gladiatorial ring. You can also see the Ear of Dionysus, a cave with a rich local history, and the bridged island of Ortigia, with its many restaurants and bars. 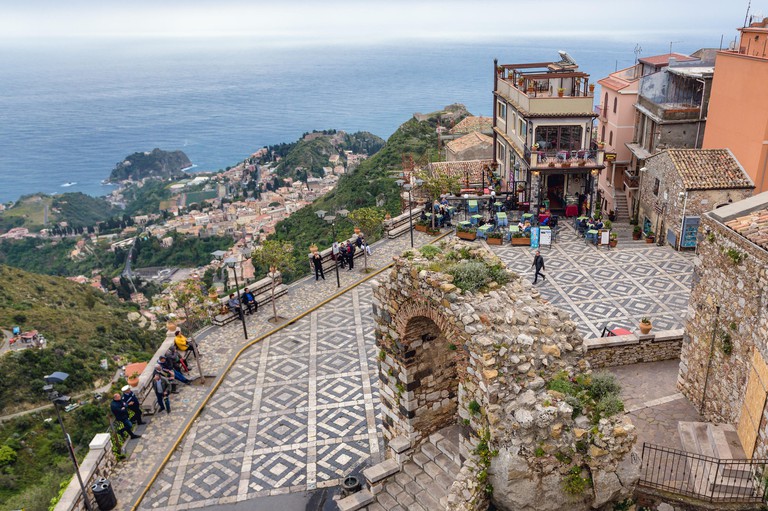 Nowhere else in Sicily offers views as all-encompassing as Castelmola, but it makes you work for them. Passing through Taormina (perhaps stopping to see the Greek amphitheatre on the way), you’ll climb up to more than 500m (1,640ft) above sea level. There is a bus route, which is recommended over driving, as the windy roads are very challenging, and parking is very limited. You could also walk, but it won’t be easy. Once at the top though, you can visit the stunning church, eat some sugared almonds and look out over Mount Etna, the Strait of Messina and the whole Calabrian coast.

Boat trips to the Aegadian Islands 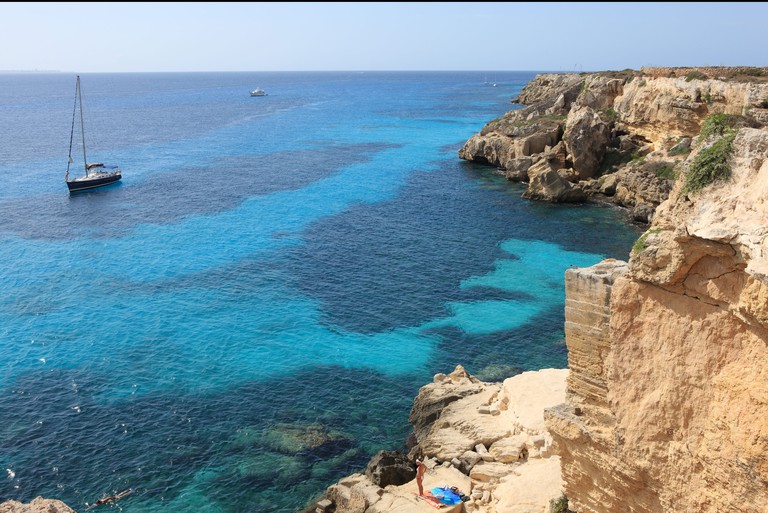 Sicily is blessed with a range of small island chains, but the Aegadian Islands are very special because they are also a protected marine reserve. You can take island-hopping boat trips from Trapani, stopping off on Favignana and Levanzo to visit small towns, swim, snorkel and see all the beautiful marine life. Scuba divers can also visit the sunken wrecks off Levanzo and Marettimo. 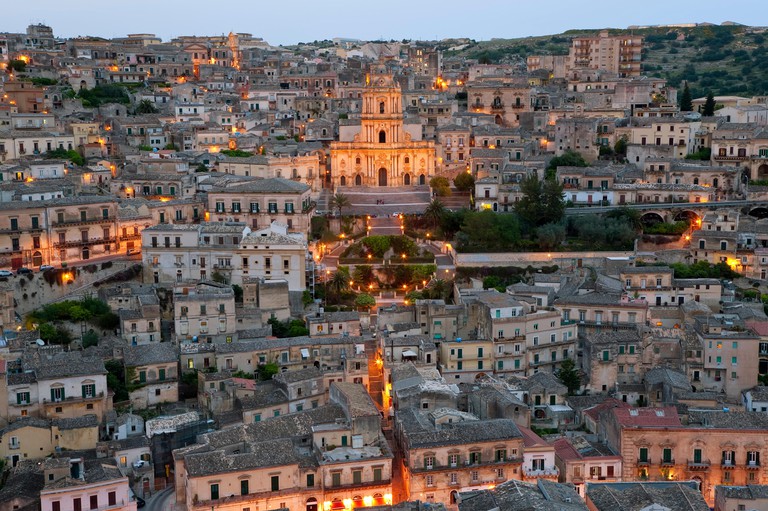 In 1693, Sicily was struck by an enormous earthquake that levelled towns across the east and southeast and killed more than 60,000 people. In the wake of this catastrophe, the baroque movement ensured that the newly built towns had a distinct, striking style now known as Sicilian Baroque. The Val di Noto is full of such places, and you can see several in a single trip or focus on one. Modica and Noto are of particular note because they contain some of the last remains of Netum, the huge ancient city that was claimed by the earthquake.

Looking for somewhere to stay? Book into one of the best hotels in Sicily for every traveller, or opt to stay like a local instead. Don’t miss the most beautiful beaches on this Mediterranean island; if adventure is more your thing, check out the top hiking trails. When in Palermo, we know just the bars to relax in.