Top Things to Do and See in Verona

There’s a lot of romance in fair Verona, which the northern Italian city uses to its advantage via Romeo and Juliet-themed attractions. But you’ll be seduced by much more: its Roman arena, ancient churches, classy museums and rough-and-ready flea market.

Shakespeare’s choice for the setting of his most famous play, Romeo and Juliet, just might be northern Italy’s prettiest and most historic city. Everywhere you look in Verona, there’s architectural beauty to behold: gothic churches, museums in former palaces and ancient Roman ruins. The arts flourish here, with an annual opera festival taking place in the first-century amphitheatre, but there are more offbeat attractions too – like the local flea market and the mysterious clock tower, which no one seems to know the age of. Verona is a love story all of its own, told by the buildings and through the preservation of its long and varied history. 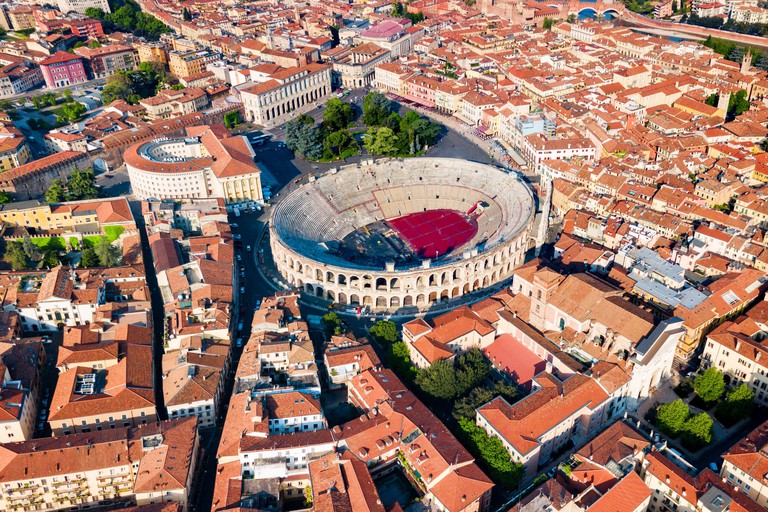 The Roman arena in Verona might not be as big as the Colosseum in Rome, but it is better preserved. It doesn’t quite qualify as a ruin – in fact, the arena is so intact that concerts are still held here. When you’re not visiting to see the opera, you can take a guided tour or just wander around in your own time. Either way, make sure you walk up to the top, to get fantastic views of the city. 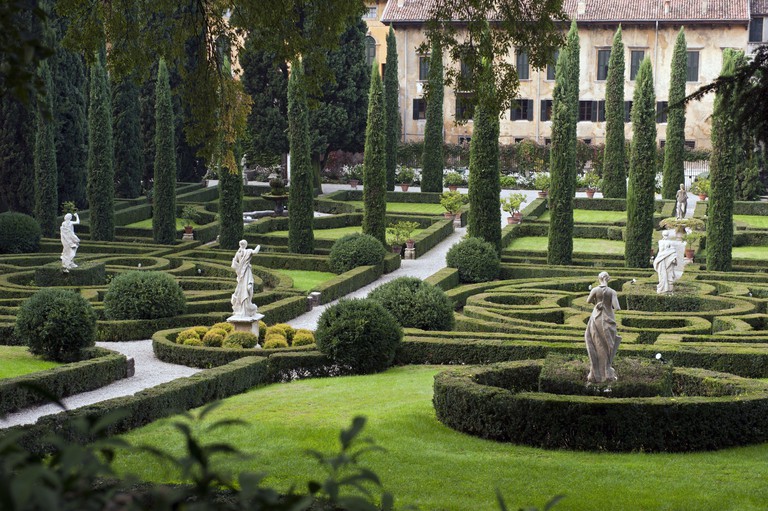 © dpa picture alliance / Alamy Stock Photo
These 16th-century, Renaissance gardens are immaculately maintained and intricately designed, with its grass kept as neatly trimmed as the cypress trees and box hedges. There’s a lot of garden to wander around here, but make sure you venture up the steps, even if it looks like a long way up – once at the top you’re rewarded with amazing views over Verona. You can visit the adjacent Giusti Palace, too, but it’s the gardens that steal the show. 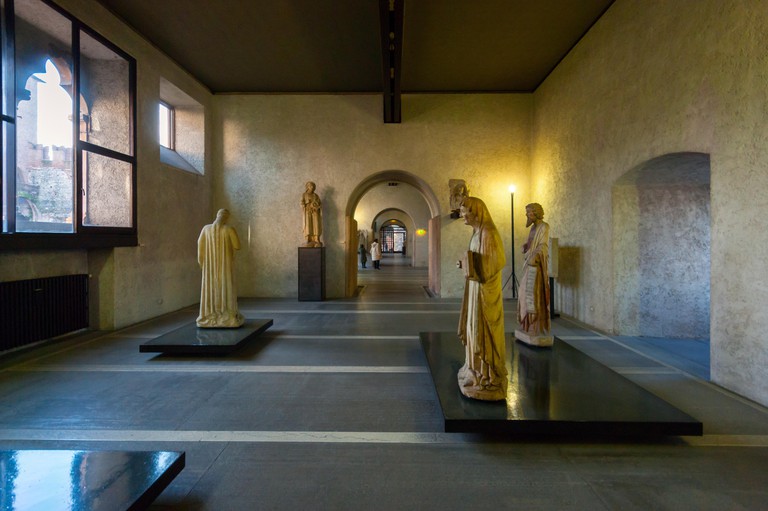 © Riccardo Bianchini / Alamy Stock Photo
The stunning location of this museum, right next to the river and the arched-stone Castelvecchio Bridge, is the first indication that you’re in for a treat when coming here. The museum is housed in an old garrison and much of the displays inside deal with Verona’s past. You should set aside at least a couple of hours to get the most out of the Museo di Castelvecchio, as there are many historical artefacts to take in – from goldwork to ceramics to weaponry. Early Renaissance paintings and romanesque sculptures sit alongside remnants of Italian history. 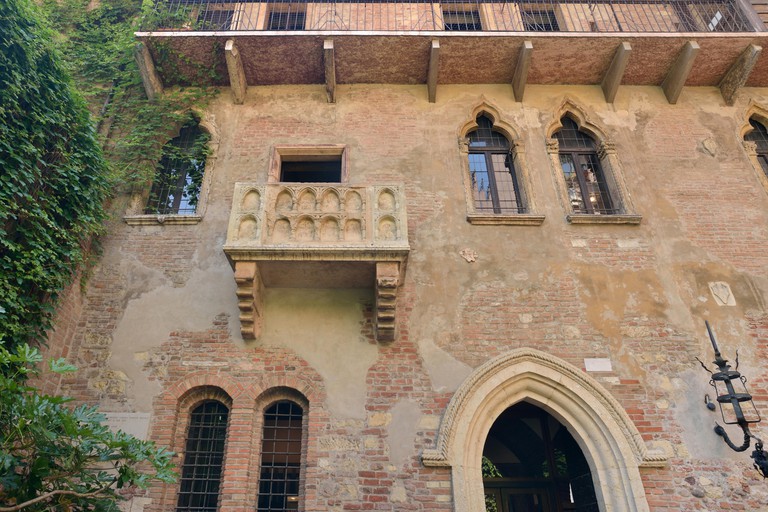 © dcphoto / Alamy Stock Photo
You don’t have to be a Shakespeare fan to know about the balcony scene in Romeo and Juliet. Juliet’s House in Verona is a period house dedicated to the leading lady – bear in mind that Shakespeare never visited Italy, so it’s not technically where the play was set. Perform your best “Romeo, Romeo, wherefore art thou Romeo” and pose for photos with Juliet’s statue, perhaps giving her shiny metal boob a rub for good luck – something that so many people have done, it’s become somewhat frowned upon. Inside the house is the famous bed that featured in the Zeffirelli film version of the play. 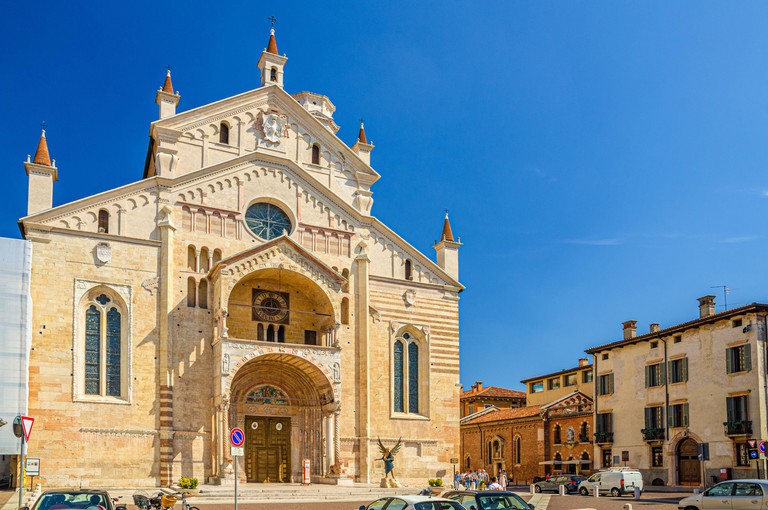 © Aliaksandr Antanovich / Alamy Stock Photo
Originally built in 1187 on the site of previous churches that were destroyed by earthquakes, this romanesque iteration has stood firmly ever since. You can buy a ticket that allows you entry into all four of Verona’s city churches, but the cathedral is arguably the most impressive. Glass panels on the floor allow you to view the old ruins of the previous church, which lie beneath. Add in the intricately painted interior of the existing church, and you have an incredible blend of history and beauty.

This might not be the kind of modern art gallery you’re used to, as most of the paintings date from between 1840 to 1940, but it’s an interesting journey through art over the years. This is “modern” art Verona-style – so you’ll still be looking at classical, religious scenes. The artists on display are all Italian, and you’re likely to discover something you didn’t know of before. Like everything in Verona, the building itself is historic and beautiful and is reached by the stone, so-called “staircase of reason”.

Natural Feature
Facebook
Email
Twitter
Pinterest
Copy link
Share
Sprawling over Piazza San Zeno, the Sunday flea market is a firm fixture for the locals and you’ll find mostly Veronians there rifling through the treasure. Perhaps because of this, the stall holders don’t speak much English – but they are open to some haggling, so don’t be put off. You can pick up just about anything here, but the Italian antiques and bric-a-brac are especially interesting. The only problem is getting it all home with you. 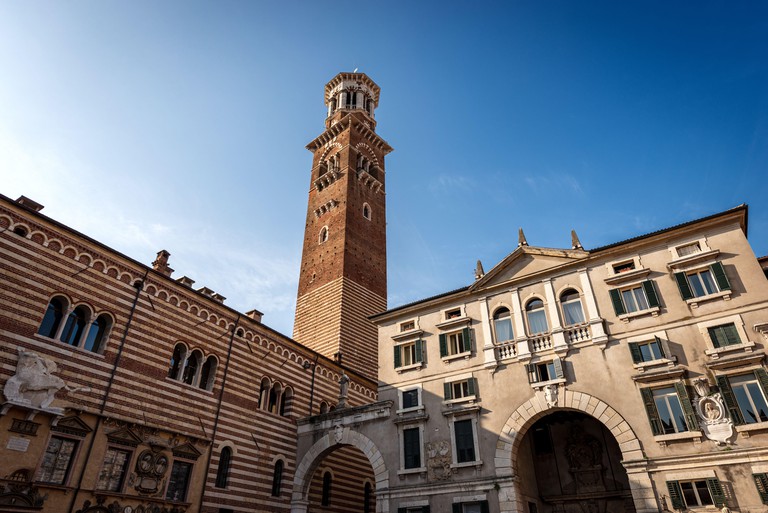 © Alberto Masnovo / Alamy Stock Photo
Making it all the way up to the top of the great tower in Verona is an achievement, if you decide to take the stairs. Otherwise, pay €1 for the lift and you’ll still have your breath to enjoy the views when you get up there. The views from the top are truly spectacular: you can see over the whole of Verona. Built somewhere between the 12th and 15th centuries, the tower has a mysterious past, with historical gaps that only make exploring it more interesting.

Find the perfect place for your trip to Verona by booking one of the city’s best hotels now through Culture Trip. For more to do whilst you’re there, take a look at our top reasons to visit the city of Shakespeare’s greatest romance. After a long day of sightseeing, spend an evening dining at one of Verona’s best restaurants. Extend your Italian adventure by visiting not-so-far-away Venice. Book a beautiful boutique hotel and explore the best of what the floating city has to offer.

This article is an update of one originally by Liz English.