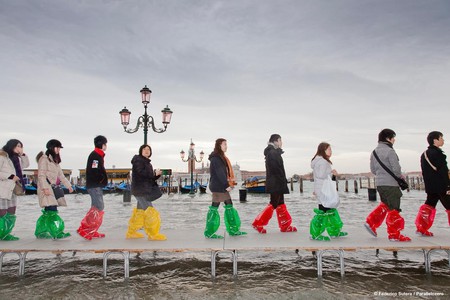 Venice is being visited to death. The city has always been a popular destination, but the recent years have brought many changes, most of which make life more difficult for residents. In “Venice For Sale” at X-Frame Gallery, photojournalist Federico Sutera takes on mass tourism through his camera lens. 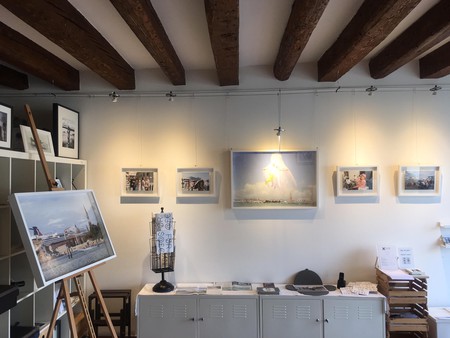 Federico is 39, with serious eyes ringed by two spider-like sets of lashes. “When I was growing up,” he says, “my city had shops and services of every type that were made for citizens. There was tourism in the ’80s, but there were also many residents. I spent a lot of time playing in the squares after school with my friends.”

In his time, there were 100,000 residents. In the space of just a few decades, that number has halved, with the number dipping below 54,500. Though records about the number of visitors are shoddy at best, estimates show that over 20 million visit the city annually. About half of them don’t even stay one night. That means that the residents will be outnumbered significantly almost every day by people who will spend very little time here. The hollowing out of Venice can be seen in the closed windows of apartments, in the kinds of shops that can manage to stay open and the kinds that can’t, and in the main thoroughfares where tourists dominate the streets. 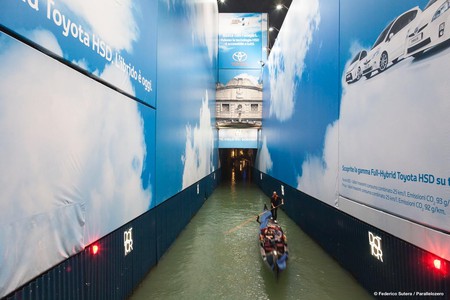 Bridge of Sighs sold to advertisers | Courtesy of Federico Sutera

“Venice is slowly emptying. The residents are being forced to leave the city as the rent is becoming more expensive every day. Their houses are being transformed into B&Bs, historic palaces are becoming hotels and shops that previously served residents are being turned into bars and restaurants that only satisfy the demands of tourists.”

His exhibit offers up a view of this dystopia world. He shows us a place where people once lived totally cleaned out of every human trace — a cheap, high-culture playground for the travelling set. The Venice he shows is at once congested, sterile and yet hollow. It’s full of bright, kitschy colors that pop against the faded, centuries old buildings, which appear almost as an afterthought.

The peoples’ faces are indifferent, like the cheap masks he photographs lining the windows of souvenir shops. The few exceptions are notable. One woman laughs joyously, looking through the viewfinder of a video camera. In another, a line of brides and grooms smile for photos in St. Mark’s Square. Unreality trumps reality in every shot.

This project has been incubating for almost a decade. “The first photograph of the series was taken in 2009,” he says. “At that time, I lived in Madrid where I was studying photography. Whenever I came back to Venice to visit my family, I increasingly felt that I was in a big theme park.”

That same year, a group of residents organized a mock funeral for the city as their population dipped below 60,000. A three-gondola procession carried a coffin through the canals. Venetians, in fact, regularly gather to protest the policies that favor extracting quick profits from the tourism industry over the sustainable growth of the city. In fact, UNESCO has pointed to the same problem, stating in 2015 that “the capacity of the city, the number of its inhabitants and the number of tourists is out of balance and causing significant damage.” The response from businessman-turned-mayor Luigi Brugnaro has been calculated indifference.

Federico, however, is still here, with camera in hand. “I felt the need to show what was happening to my city.”