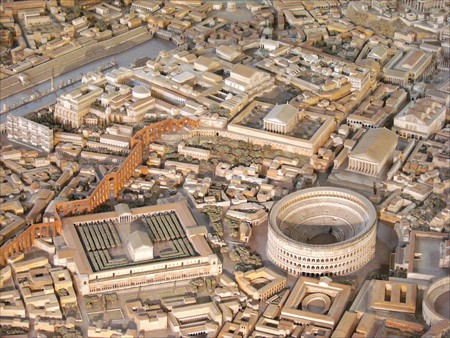 From triumphal arches to marble facades, not to mention incredibly well-preserved monuments like the Pantheon and Colosseum, Rome exhibits countless clues of its ancient past. Other landmarks have been lost to the ravages of time, or even recycled into new buildings, so getting a complete picture of how Rome really looked at the height of the empire can be difficult. However, architect Italo Gismondi created an intricate scale model of the city – a reconstruction so impressive it even featured in the film Gladiator.

Known as Il Plastico di Roma Imperiale, the model was commissioned in 1933 by dictator Benito Mussolini – whose fascist regime aspired to restore the grandeur of ancient Rome – to celebrate the 2,000th anniversary of the birth of Augustus. The model itself though recreates Rome at the time of Constantine I, around the 4th century AD, on a scale of 1:250.

Gismondi designed the model, made of alabaster plaster reinforced with vegetable fibre and metal, with the utmost attention to detail. While monuments like the Colosseum and Pantheon could be studied from the originals, Gismondi had to go back to the history books for others. 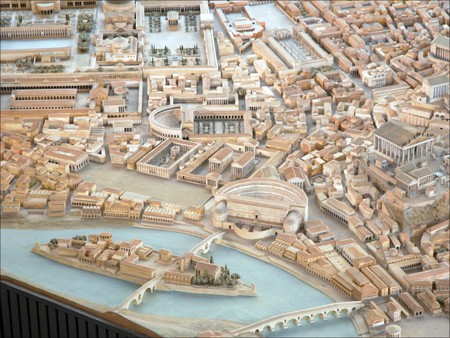 The Forma Urbis Romae, a massive marble map of Rome created under the emperor Septimius Severus in the 3rd century AD, was one of the principle sources for Gismondi’s work. Maps published in 1901 by Rodolfo Lanciani, a distinguished archaeologist and pioneering student of ancient Roman topography, also informed the model.

Pierino Di Carlo, an artist and master model maker who worked on the piece alongside Gismondi said: ‘The major monuments, the Temple of Claudius, that of Jupiter Optimus Maximus, the Imperial Fora, the Roman Forum, the baths, the Colosseum, are accurate. In the other parts, there is a bit of fantasy.’

As well as increasing the relative height of some landmarks to allow a better view of the carefully molded buildings, Gismondi also used simplified geometric forms to represent housing districts. This was, in part, because archaeological evidence of what each individual house looked like thousands of years ago simply doesn’t exist, but had the side effect of presenting ancient Rome in an idealised and ordered manner – much to the satisfaction of Mussolini. 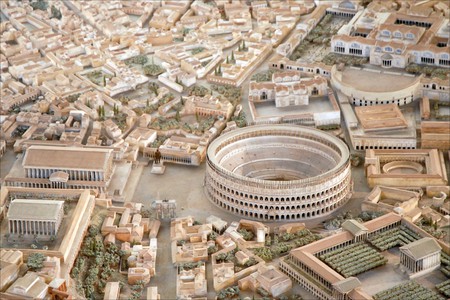 Details of the model up close | © Jean-Pierre Dalbéra/Flickr 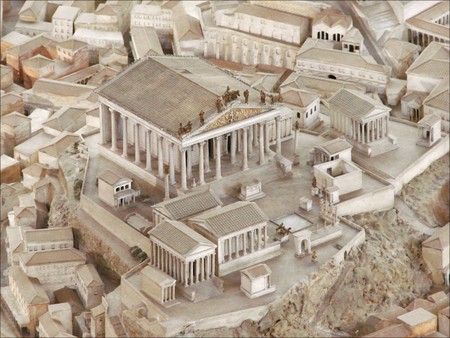 The original diorama represented only the monumental centre of Rome but was later expanded to include the entire urban area within the Aurelian Walls. In 1955 it was permanently installed in the Museum of Roman Civilization in the EUR neighbourhood of the city. Gismondi continued to revise the model, making adjustments and adding new sections until the early 70s.

Measuring over 200 square metres, Il Plastico di Roma is filled with extraordinary detail and is considered one of the most important visualisations of ancient Rome there is. Its original purpose as a display piece is even thought, by some scholars, to have legitimised and inspired the Fascist’s regime’s brutal town planning policy while its legacy as an authoritative replica means it continues to be used as a source in present-day – appearing in a few shots of Ridley Scott’s Gladiator and also seen in cutting-edge virtual reconstructions of ancient Rome. 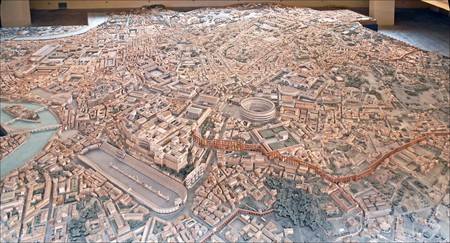 The Museum of Roman Civilization is currently closed to the public.