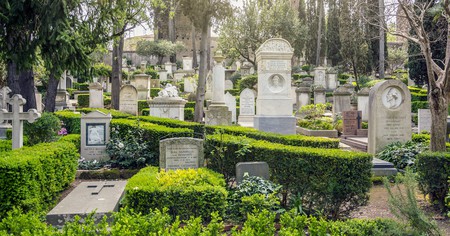 In Rome, there’s a beautiful graveyard called the Cimitero Acattolico, or the Protestant Cemetery, a lesser-known destination where the English poets John Keats and Percy Bysshe Shelley are buried and where cats wander about and bask in the sun.

After Oscar Wilde visited the Cimitero Acattolico in Rome in 1877, he wrote to the Reverend J Page Hopps, “Keats’s grave is a hillock of grass with a plain headstone, and it is to me the holiest place in Rome” (The Letters of Oscar Wilde, 1962). Keats had been laid to rest here in February 1821.

His fellow romantic poet Percy Bysshe Shelley had interred his and his wife Mary Shelley’s three-year-old son William here in 1819. In the preface to Adonais, Shelley’s soaring pastoral elegy to Keats, he wrote, “The cemetery is an open space among the ruins, covered in winter with violets and daisies. It might make one in love with death, to think that one should be buried in so sweet a place.” Just 23 months after Keats’s death, Shelley’s ashes were also placed in the cemetery. 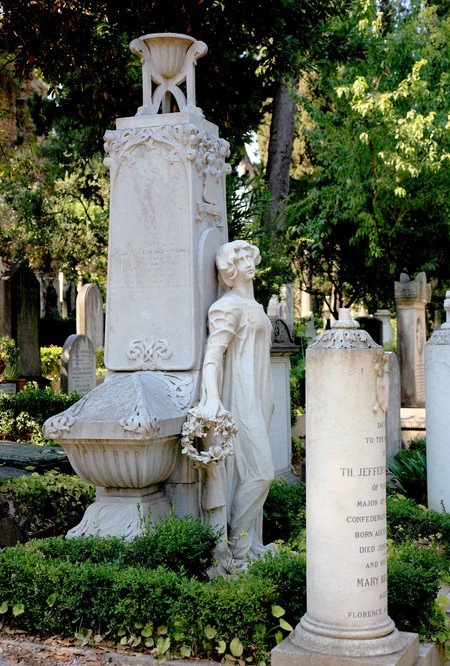 Before visitors to the cemetery find the graves of Keats or Shelley, they will often encounter residents who are very much alive: it is a sanctuary for semi-feral cats that are wont to loll on the graves or sit licking their paws on them, regardless of who’s underneath. Some of the cats are aloof; others perform figures of eight around your ankles. They lend the graveyard an aura of peace.

Situated at the base of the cemetery’s small Cestius Pyramid, the cat sanctuary is run by a group of dedicated volunteers. Its association – I gatti della Piramide – has its own website. The cemetery’s director, Amanda Thursfield, says the “cat ladies” and “cat men” look after the felines, feeding them twice a day and taking care of their medical needs. Thursfield, who thinks them “some of the happiest cats in the world”, says that there are 30 or so cats here, but it’s easy to leave with the impression that you’ve seen hundreds. (There are many more at Rome’s Torre Argentina Cat Sanctuary.) In 2018, the German photographer Uta Süβe-Krause published a photo book about the cemetery cats. 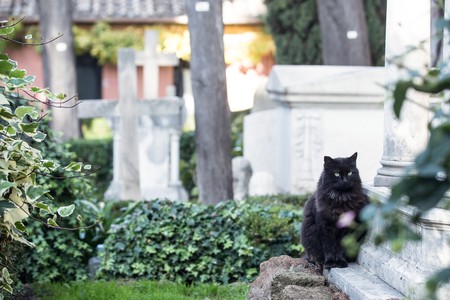 Colony of the pyramid's cats, present in Rome in the Ostiense area inside the non-Catholic cemetery. | © Matteo Nardone / Pacific Press / Alamy Stock Photo

The cemetery’s original cats are believed to have arrived somewhere between the mid-1850s and the 1920s, but the human corpses had arrived somewhat earlier. According to Johan Beck-Friis’s 1956 graveyard guide The Protestant Cemetery in Rome, a city plan dated 1748 “seems to be the first official document showing the existence of … the protestants’ burial place”.

In 1738, a 25-year-old Oxford graduate named George Langton became the cemetery’s first occupant. The rules of the Roman Catholic Church prohibited non-Catholics in the Papal State from being buried in a Catholic church or in consecrated earth, so another resting place had to be found for them. With few exceptions, non-Catholics were buried at night so as not to offend Catholic citizens. 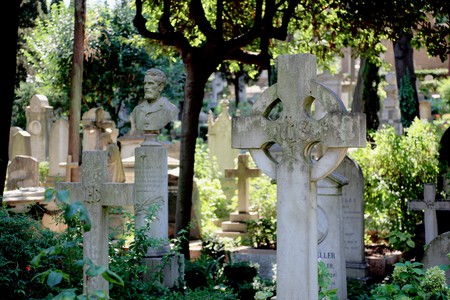 The graveyard is located in Testaccio, south of the Forum and the Colosseum. It goes under other names than the Non-Catholic or Protestant Cemetery, such as the Testaccio, the British, and the Cemetery of Poets and Artists. It contains the remains of nearly 4,000 humans, mostly Britons, but including people of many countries and a surprisingly high number of local Catholics.

Close to a surviving portion of the third-century wall built during the reign of the Emperor Aurelian, this green oasis of firs, cypresses and elaborately masoned tombs and mausoleums grew in the shade of an older landmark on its eastern edge. The small Egyptian-style Cestius Pyramid at the base of which the cat sanctuary sits was built of brick-faced concrete and white Carrara marble between 18 and 12 BC as a tomb for Gaius Cestius, a praetor, tribune and member of one of the four great religious organisations of Ancient Roman priests. 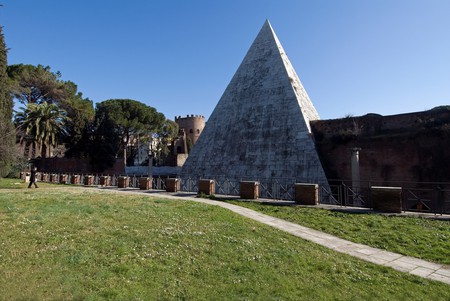 Judging from Henry James’s 1909 travel book Italian Hours, the American novelist was much taken with the pyramid. The English novelist and poet Thomas Hardy was more taken, however, with its adjacency to Keats and Shelley’s graves. In the poem Hardy wrote after his visit to the cemetery, he wondered who Cestius was and what he did in his lifetime, rejoicing that, in death, he beckons “To where, by a shadowy wall and history-haunted street / Those matchless singers lie…”

Keats and Shelley were the greatest lyric poets of the English Romantic movement: Keats the divine thinker whose bejewelled imagery celebrated the transcendent power of nature and the glory of the past; Shelley a visionary of the sublime, restless philosopher and political radical. They were acquaintances, not friends, but Shelley’s celebration of Keats in Adonais binds them in death no less than does their enduring proximity in the Protestant Cemetery. 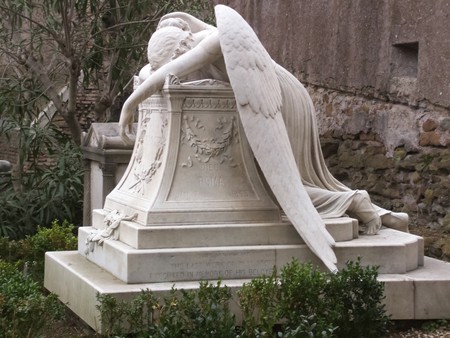 The Angel of Grief sculpted by William Wetmore Story in memory of his wife placed in Cimitero Acattolico ("Non-Catholic Cemetery") of Rome. | © Massimo Salesi / Shutterstock

Not that they lie that close. The tubercular Keats, who had come to Rome in forlorn hope of prolonging his life, died at the age of 25 on 23 February 1821. He is buried in Parte Antica, the older part of the cemetery, next to the grave of his devoted friend and deathbed companion, the artist Joseph Severn, who died in 1879. Shelley is buried in the cemetery’s Zona Vecchia section, which was added during its 1822 expansion.

Since 1818, Shelley had lived a roving existence in Italy with Mary (the author of Frankenstein, 1818) and her cousin Claire Clairmont. On 8 July 1822, Shelley, who was 29, drowned with two others in the Gulf of Spezia; he had been returning from Livorno (also known as Leghorn) to his new home in Lerici when a storm sank his sailing boat. He had a small volume of Keats’s poetry in his pocket at the time.

Like Keats, Shelley lies next to a friend, in his case the author and adventurer Edward J Trelawny, who oversaw (as did Lord Byron) the cremation of Shelley’s decomposed body on the beach at Viareggio. Trelawny allegedly pulled Shelley’s unburned heart (though it might have been his swollen liver) from the funeral pyre and had it sent to Mary.

Beck-Friis’s guidebook explains that Shelley’s ashes were sent in an oak casket to John Freeborn, the acting British consul in Rome, who kept them in his wine cellar until they could be buried in the Protestant Cemetery. The papal authorities had banned further burials in the Parte Antica, thus preventing Shelley’s ashes from being buried next to his son’s grave.

Freeborn and Severn eventually got permission to exhume William’s body from its supposed plot near Keats’s and to bury it with Shelley in the cemetery’s recently opened Zona Vecchia on 23 January 1823. But, as Severn wrote to a friend on the same day, a skeleton five and a half feet long was found under little William’s headstone, “so we proceeded very respectfully to bury poor Shelley’s ashes alone” (The Life and Letters of Joseph Severn, 1892). A few weeks later, Trelawny, unhappy with Shelley’s resting place, purchased two plots next to the Aurelian Wall – one for his friend and one for himself – and had Shelley’s ashes reburied. Trelawny was interred next door 58 years later.

Keats requested that his name not be carved on his gravestone (it appears instead under Severn’s name on his stone). The inscription on Keats’s stone refers to him only as a “YOUNG ENGLISH POET”, and adds, “Here lies One Whose Name was writ in Water”. These last words – the poet’s presentiment that he would be forgotten – are ironic given the immortality he attained. 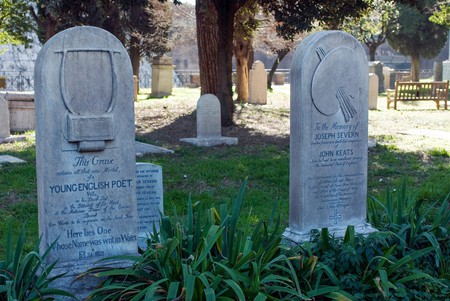 Shelley’s gravestone bears his name and the Latin “COR CORDIUM” (heart of all hearts) – notwithstanding that the ashes of his heart (or liver) were supposedly buried with his son Percy Florence Shelley when he was buried in the family vault at St Peter’s Church, Bournemouth, England, in 1889. Three lines from the song of Ariel in Shakespeare’s The Tempest complete the inscription above Shelley’s ashes: “Nothing of him that doth fade / But doth suffer a sea change / Into something rich and strange”.

To get in the mood for visiting the Protestant Cemetery, read Keats’s ‘Sonnet to Mrs Reynolds’s Cat’ and Shelley’s ‘Verses on a Cat’.