This Idyllic Italian Village Is Paying People Thousands to Move In, but There's a Catch 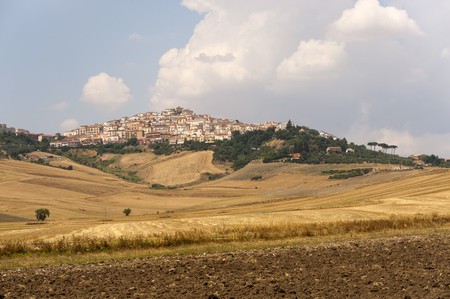 Dreaming about swapping public transport for pasta, and striving for the man with la dolce vita?

If you’re seriously ready to pack and up and go, this opportunity might be the tiny push you need to rush out the door.

A southern Italian village is offering serious amounts of cash to people who move there in an effort to regenerate the area.

Candela, in the southern region of Puglia, is surrounded by pristine green hills and verdant forests, and is paying up to €2,000 to those who relocate there.

The town was once known as ‘Little Naples’ and its streets were filled bustling shoppers, travellers and merchants, but in recent years it has become quiet and underpopulated. In the ’90s the village had 8,000 residents, but there are now just 2,700.

Mayor Nicola Gatta is advertising for fresh blood, so to speak, to make the streets of the quaint medieval village ring with chatter and laughter once again.

And you’ll receive a chunk of money as a thank you for the oh-so-difficult problem of moving to this gorgeous location.

Speaking to CNN Travel, Gatta said: ‘I work each day with passion and commitment to bring Candela back to its ancient splendor.’

He claims the town hasn’t had a single crime committed for 20 years, and that the quality of life is exceptional.

You won’t be short of things to do. Some of the region’s best beaches are a mere hour’s drive away and the village boasts the ‘Trasonna’, a 35cm-wide alley that locals boast is the narrowest in Italy.

There are scores of attractive white houses with balconies and terraces sitting empty just waiting for you to move in.

Only three requirements stand between you and your new Italian home. All new residents must take up official residency in Candela, rent a house (or buy one) and have a job that pays at least €7,500 a year.

So all new Candela-ites must work and have an income – the town doesn’t want freeloaders who only move there for the money.

Some people have already benefitted from the scheme; six families from northern Italy have already settled in and another five have applied to move.

The school janitor used the cash to have his family join him in Candela, and another new local has opened a news stand.

You could also benefit from reduced tax credits on waste disposal and other expenses.

The town has received a makeover and is looking shiny and fresh, with parts of it now open for guided tours. A flower festival takes place every year, with artists creating carpets of patterned flower petals covering the streets.

Local food is a highlight, and an annual food and wine tasting tour traverses the village. You’ll enjoy sausages, creamy burrata and bruschetta with local olive oil. Specialities include asparagus and snails.

So when are you moving? We’re already on the way to the airport *door slams, car screeches*.