This Country is Officially Home to Europe's Most Beautiful Hostel 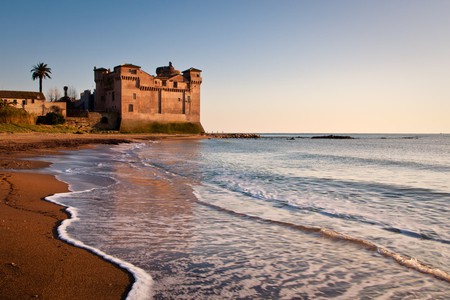 Known locally as the ‘castle kissed by the sea’, the Castello di Santa Severa sits on a gorgeous stretch of shoreline on Italy’s Lazio coast. It has slept noblemen, popes and even German soldiers, who used it as a military base during World War II, but it now hosts guests of a different kind. The 14th century fortress is home to what’s been touted as ‘Europe’s most beautiful hostel’.

With space for up to 42 guests, the hostel was opened as part of an initiative to restore the once abandoned castle and revitalise the surrounding area. The 14 tastefully decorated rooms, characterised by stone walls and vaulted wooden ceilings, are located on the first floor. Some have stunning sea views while others overlook the castle’s internal courtyard. There are private single and double rooms, as well as space for groups of up to five.

In a bid to attract more young people and families to the area, prices for this arresting location are also super-affordable, ranging from €25-95 in low season to €35-105 in high season.

This unlikely setting for reasonably priced holiday accommodation is so picturesque that it’s been called ‘Europe’s most beautiful hostel’ by the president of the Lazio region, Nicola Zingaretti.

The castle also houses a museum and as part of the project there is an ‘innovation lab’ that details the history of the castle, through virtual reality exhibits and displays.

The opening of the hostel marks the end of the second stage of the redevelopment of the castle, which reopened in 2014, after more than a decade of closure. Officials hope to advance the project further with the addition of extra parking facilities and events that highlight the region’s speciality food, wine and crafts.

Constructed on the site of an Etruscan settlement known as Pyrgi, Castello di Santa Severa is named after a young Christian martyr who was killed, along with her two brothers Calendino and Marco, during the reign of Diocletian in the 3rd century AD. Remnants of an early Christian church dedicated to the saint can still be seen today at the site.

After Pope Sixtus IV donated the castle to the Order of the Holy Spirit in 1482, the castle now belongs to the Lazio region. This picturesque spot provides a welcome getaway for Romans escaping the city, particularly in the summer when the surrounding beaches fill up with sun-kissed bodies. Easily accessible, the castle and beach are just a 15-minute walk from the local train station.