The Top Things to Do in Puglia, Italy 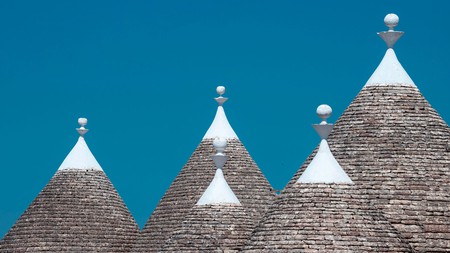 From vast expanses of olive groves and vineyards to pristine beaches and secluded coves on the Adriatic and Ionian coastlines, Puglia features some of the country’s most idyllic landscapes. Coupled with its rich culinary heritage, whitewashed rural villages dotted with trulli houses and cities characterised by beautifully preserved Romanesque, gothic and baroque architecture, it’s no surprise that this previously underexplored region, at the heel of Italy’s boot, is now firmly on traveller radars.

To help you plan your visit, we’ve picked out the best things to see and do in Puglia, Italy.

Cycle through the Itria Valley 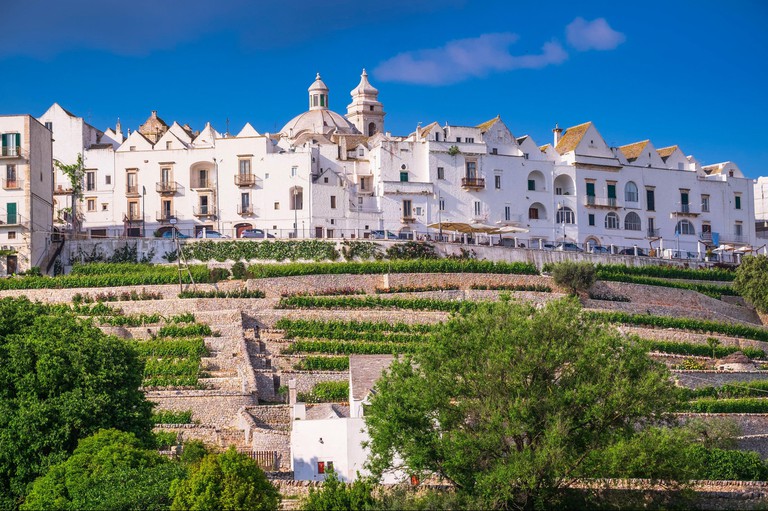 © Hemis / Alamy Stock Photo
Despite its name, the Itria Valley isn’t actually a valley, but a karst depression between the provinces of Bari, Brindisi and Taranto, complete with olive groves, vineyards and bright red soil. This particularly scenic part of Puglia is known for its whitewashed towns, such as Locorotondo and Ostuni, and trulli houses (traditional limestone dwellings with conical roofs), which are best seen in the Unesco-listed site of Alberobello. Renting bikes is a great way to get from one town to another while appreciating the area’s serene countryside.

With Culture Trip, you can enjoy a guided e-bike ride through the Itria Valley, visiting Alberobello and Locorotondo, as part of our exclusive 10-day Southern Italy adventure – led by our Local Insider.

Architectural Landmark
Facebook
Email
Twitter
Pinterest
Copy link
Share
Nicknamed The Florence of the South, Lecce – on Puglia’s Salento peninsula – is renowned for its ornate baroque architecture. With an abundance of honey-coloured churches and palaces crafted in local sandstone throughout its historic centre, three of the city’s most important religious structures – Lecce Cathedral, the Episcopal Palace and the Seminary Palace – face each other on the Piazza Duomo. The 17th-century Basilica di Santa Croce and the ancient Roman amphitheatre, a five-minute walk apart, are also must-visit landmarks. While you’re there, check out Lecce’s artisan craft shops, superb restaurants and cosy wine bars. 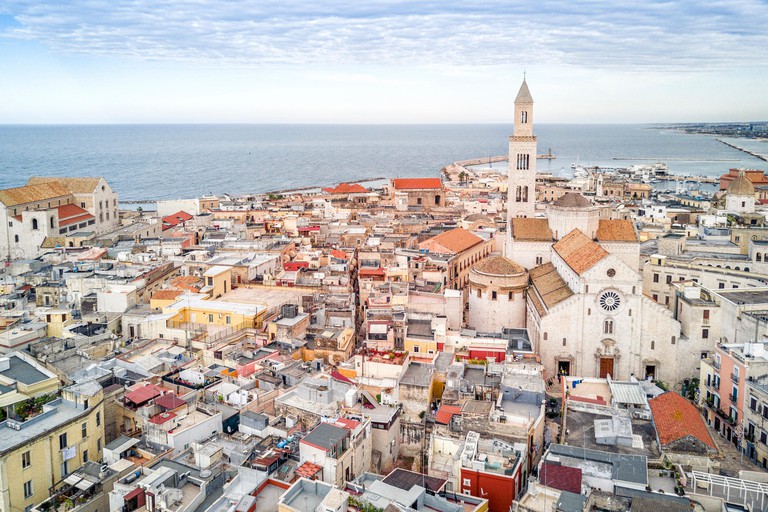 © imageBROKER / Alamy Stock Photo
As southern Italy’s second-largest city after Naples, Bari makes an ideal starting point for a trip to Puglia. Its Old Town, Citta Vecchia, is especially worth exploring. Meander your way through the maze of narrow alleys and soak up the atmosphere of the two main squares, Piazza del Ferrarese and Piazza Mercantile, where you’ll find plenty of lively cafés, bars and restaurants. Be sure to stop by the Basilica di San Nicola (an 11th-century Romanesque church) and the Cattedrale di San Sabino (Bari Cathedral) to see the city’s architectural highlights.

Despite bearing plenty of similarities with food you’ll find elsewhere in Italy, Puglian cuisine has a distinct character of its own. It includes staples like pane di Altamura (a type of nutty, slightly sweet bread made with durum wheat), orecchiette (small, ear-shaped pasta), burrata cheese and fava beans, plus linguine ai ricci di mare (linguine with sea urchins), patate e cozze (a layered dish consisting of rice, potatoes and mussels) and panzerotti (fried dough pockets stuffed with tomatoes and mozzarella). Olive oil is also synonymous with the region; head to an authentic masseria to sample it fresh from the source.

Relax on the beaches of Polignano a Mare 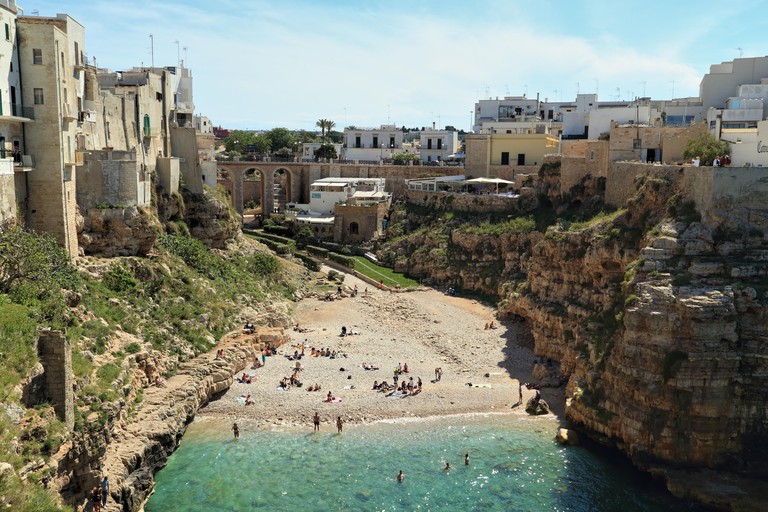 © Matthias Scholz / Alamy Stock Photo
The town of Polignano a Mare sits atop a high cliff overlooking the Adriatic Sea and is a prime spot to relax and soak up some Puglian sunshine for a day or two. Head down to Lama Monachile – a white-pebble beach within a rocky cove that’s bordered by a Roman-era bridge – and cool off in the calm, clear water, or wander through the old town to the main square (Piazza Vittorio Emanuele) for a coffee at one of the charming cafés. In the evening, stroll over to the Pietra Piatta or Balconata sur Mare for magnificent sunset views.

One of Italy’s most spectacular natural wonders, the Castellana Caves (discovered in 1938) are a karst cave system in the province of Bari. Stretching to 3,343m (10,968ft) in length and descending to 122m (400ft) underground. Choose between a 50-minute (€15) or two-hour (€18) guided tour, descending as far as 70m (230ft) as you wind through the ethereal labyrinth, passing by enormous stalagmite and stalactite formations. The longer tour visits the Grotta Bianca (White Cave) – a gleaming, alabaster cavern, which is arguably the Castellana Caves’ standout sight.

A guided tour of the Castellana Caves is included in Culture Trip’s specially curated small-group Southern Italy trip, along with visits to Lecce, Otranto and Polignano a Mare. 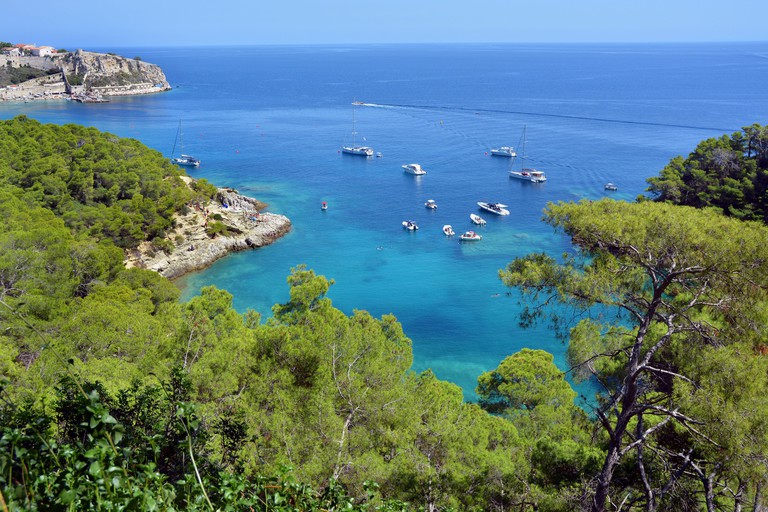 © Luigi Bertello / Alamy Stock Photo
Gargano National Park, in northern Puglia, resembles the spur of the Italian boot, jutting out into the Adriatic Sea. From a rugged mountainous interior to Aleppo pine forests and a combination of sandy and pebble beaches, it features an extraordinary variety of landscapes within a relatively compact area – perfect for hiking, cycling and swimming. Beyond the tranquil scenery, there are a handful of postcard-worthy towns, such as Monte Sant’Angelo (in the mountains) and Peschici (by the coast). Meanwhile, the Tremiti Islands – 22km (14mi) off the mainland – are teeming with marine life, making for excellent snorkelling and scuba diving.

Swim off the coast of Gallipoli

On the Ionian coast of the Salento peninsula, Gallipoli is a town split into two halves. There’s the new town, on the mainland, and the old town, on an island only accessible via a 16th-century bridge. Its name derives from the Greek word kallipolis, which translates to beautiful town – and it’s easy to see why. As well as its impressive baroque architecture, it also boasts several of Puglia’s finest beaches, including Spiaggia della Purità (in the old town) and Baia Verde. A few kilometres north of town, Rivabella, Padula Bianca, Lido Conchiglie are all popular swimming and sunbathing spots, too. 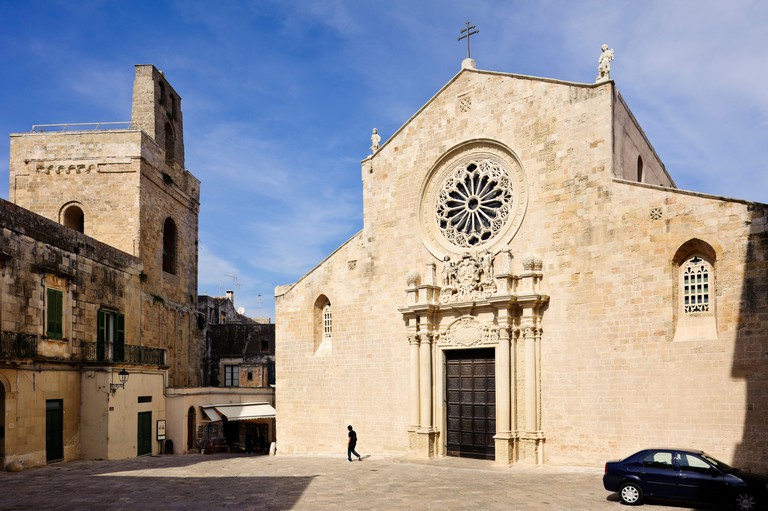 © Cyrille Gibot / Alamy Stock Photo
Established by the Greeks under its original name of Hydrus, the city of Otranto morphed into a major trading port of the Roman empire, and experienced periods of Byzantine, Norman and Ottoman rule over subsequent centuries. Its complex history of invasion is reflected in its eclectic blend of architectural styles – most notably the 11th-century Romanesque cathedral, with its elaborate floor mosaic and eerie skull collection inside glass cases, the 15th-century Aragonese castle, and the 10th-century Church of San Pietro, embellished with well-preserved Byzantine frescoes inside.

Puglia might not have a reputation for being a wildlife hotspot, but Sentiero Airone Nature Reserve, sandwiched between Gargano and Alta Murgia national parks, is a bird watcher’s paradise. It’s home to one of Europe’s largest colonies of flamingos, as well as limestone plateaus and caves containing thousands of ancient dinosaur footprints. Salina dei Monaci Nature Reserve, on the west side of the Salento peninsula, and the salt pans of Margherita di Savoia, an hour’s drive up the Adriatic coast from Bari, are also safe bets for spotting flamingos in the wild.