The Solo Traveller’s Guide to Sicily 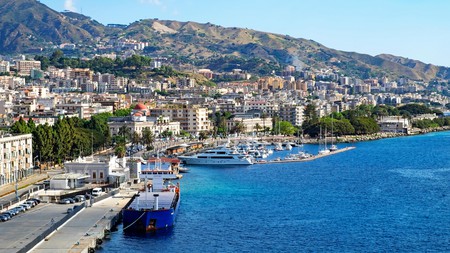 Out there in the Med between mainland Europe and North Africa, this captivating island may belong to Italy, but it has an allure that feels further-flung. Waves of invaders have left behind a rich and varied culture, from sun-bleached Greek temples to spice-infused Arab markets to majestic Norman cathedrals. The landscape is just as diverse – you might scale the snow-dusted slopes of volcanic Mt Etna in the morning, then spend the afternoon on the beach with an Aperol spritz. Then there’s the food, a mouthwatering fusion of flavour that’s worth the trip alone. Fancy a taste? Read on…

In a nutshell: vibrant, a celebration of food, family and friendship. If you head off the beaten path and into the rugged interior, communication can be a little tricky, as many people speak a Sicilian dialect. But you’ll always find Sicilians welcoming and helpful – and English is widely spoken in the main tourist spots. The loveliest time to visit Sicily is in spring, for sunny but not scorching days. (July and August are roasting, with Italians descending for their holidays and hotel prices soaring.)

A two-week loop allows ample time to tick off Sicily’s must-sees, with beach lounging and gelato-tasting along the way. Begin in Palermo, with its architectural treasures and raffish charm. Don’t miss the shimmering Palatine chapel and Unesco-listed corker of a cathedral in nearby Monreale. Heading southwest, travel further back in time: the crumbling Greek temples of Segesta and Selinunte charm even history-phobes with their dreamy settings. These are just the warm-up act – most eye-popping is the Valley of the Temples at Agrigento in the south (arrive early in summer to dodge the crowds).

The southeast feels more languid, with Baroque towns, including Ragusa and Noto, full of flouncy palazzi. Stop at the Vendicari Nature Reserve, with its flamingoes, for a dip in an unspoiled cove, then head north along the coast. Ready to glam it up? Taormina draws a well-heeled crowd with its cliffside restaurants and chic boutiques. More laid-back, but no less lovely, Cefalù is a honey-coloured seaside resort with cobbled streets and a postcard-pretty harbour. Looming above the town, La Rocca is worth the climb for its hypnotic views. Or you could tackle volcanic Mount Etna, its smouldering craters still regularly erupting. 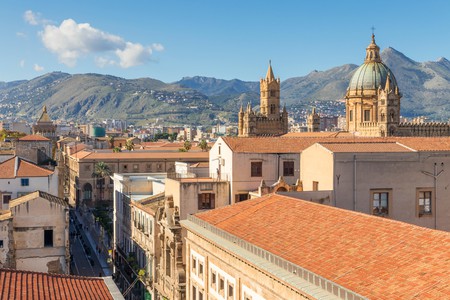 Where to stay in Sicily as a solo traveller

Even on a budget, it’s easy to find stylish bed-downs, from charming B&Bs in Palermo to grand country piles encircled by olive groves. A great option for solo travellers is an agriturismo – a stay on a working farm or wine estate. You’ll get a real flavour of Sicilian life with sociable home-cooked meals, and many places have their own pools, with bonuses such as horse-riding or cookery courses. Fancy splashing out for a night or two? Take your pick of luxe retreats, from elegant palazzi overlooking the Med to sleek city boltholes. 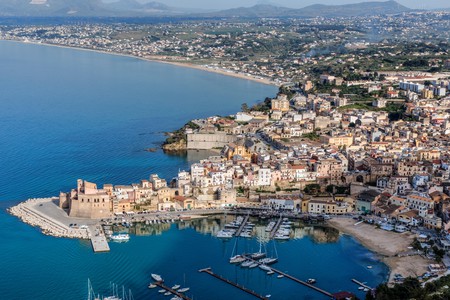 What to do in Sicily

Watch a performance at the Teatro Greco

Taormina’s ancient Greek theatre couldn’t have a more dramatic setting, with the sparkling Med below and Mount Etna brooding in the background. During the summer, you can catch one of the live performances staged here, from ballet to pop. 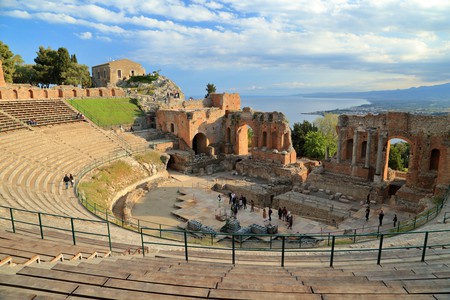 Go island-hopping in the Aeolians 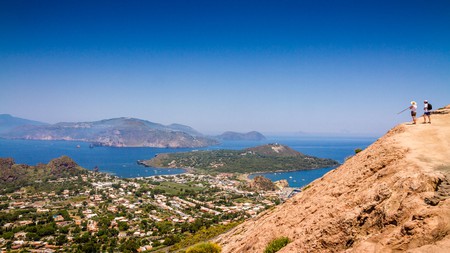 You could just take the cable car, but far more fun is an off-road jeep trip up Sicily’s iconic volcano. Rising through pine forests, you’ll emerge above the tree line into a barren moonscape, traversing hardened lava flows and peering into smouldering craters. Try this on a small group tour with us – La Dolce Vita: the Best of Sicily. 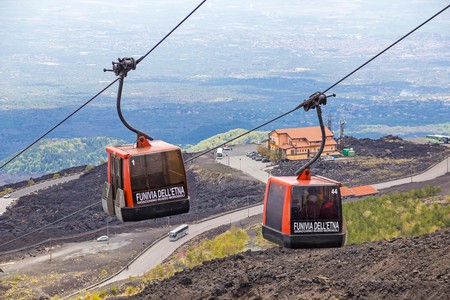 You can ride the cable car to Mount Etna, or opt for an off-road adventure | © Olena Buyskykh / Alamy Stock Photo

Eat and drink in Sicily as a solo traveller

Leave any notions of dieting behind – this is the island where a gelato-stuffed brioche is a perfectly acceptable breakfast. Eating is one of Sicily’s great pleasures, and you could easily spend a trip here rolling from one mouthwatering meal to the next. Even in the most humble trattoria, you’re pretty much guaranteed a foodie feast. Don’t miss classic dishes such as pasta alla norma, laced with aubergine, basil and ricotta, or saffron-infused fish couscous. Wash it down with a glass of excellent Sicilian wine – big names include Planeta and Donnafugata. 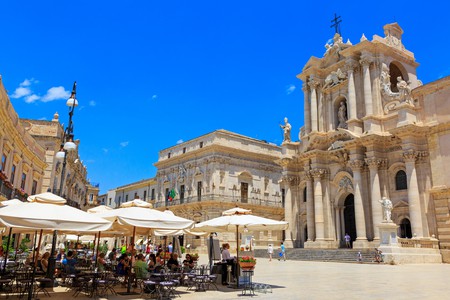 Getting around in Sicily as a solo traveller

While it’s possible to journey using public transport, trains are slow and buses can be infrequent, especially on Sundays. Hiring a car will give you far more freedom to explore, but be prepared for some lively Sicilian driving. It’s wise to stick with a small vehicle, as you’ll find it far easier to negotiate narrow town centres. If you can, choose an automatic, since the island is very hilly, so you’ll be constantly changing gears otherwise. 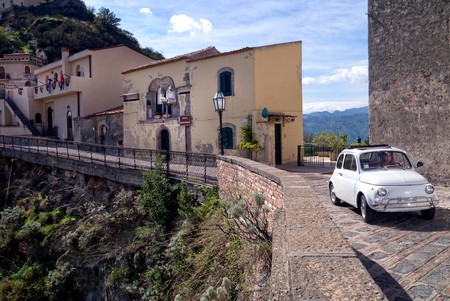 Just take the usual precautions against bag-snatching and pickpockets in the main cities. Solo female travellers in Palermo will feel perfectly happy in a hotel in a busy area, and central streets are well-lit after dark.

Be aware that Sicilians take their afternoon siesta seriously – many places close between 1pm and 5pm. When visiting churches, bare shoulders and knees should be covered – a light shawl or scarf should do the trick.

Fancy exploring the island as part of a small group of like-minded travellers? Sign up with us – La Dolce Vita: the Best of Sicily is a 10-day adventure taking in highlights including Palermo (for a cooking class) and Mount Etna by 4×4.