The Pantheon's Roof Once Offered the Best Views Over Rome 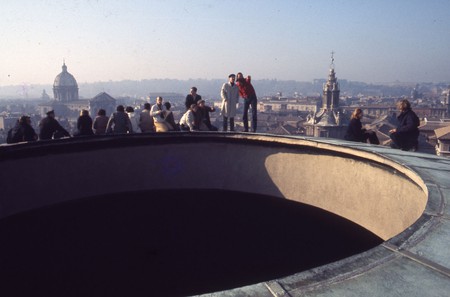 A group admiring Rome from the top of Pantheon, circa 1975 | © Frank Baker Holmes

While modern day visitors to Rome’s Pantheon must be satisfied with gazing up at the oculus from below, as little as 40 years ago, it was possible to stand on the roof of this millennia-old monument and peer through ‘God’s Eye’ from above.

In his book A Cloud of Unusual Size and Shape, author Matt Donovan recalls the experience of artist Frank Baker Holmes, who twice made the trip onto the Pantheon’s roof and whose photographs, along with old guidebooks, reveal how in less litigious times the exterior of the Pantheon was just as popular as its interior. 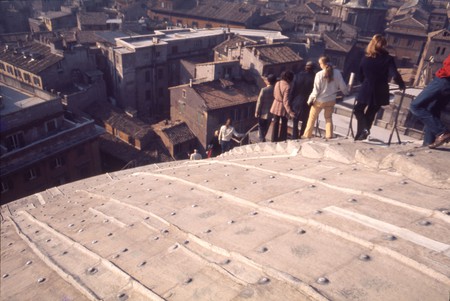 A group from the American Academy in Rome descending the Pantheon’s roof, circa 1975 | © Frank Baker Holmes

Even in a city as awash with architectural masterworks as Rome, the Pantheon stands out. Everyone remembers their first time going between the 40-foot granite columns, giant timber doors, looking up into the oculus and watching the light seem to sink into the marble floor below. Inside the Pantheon time stands still, the deafening silence of this enormous church, drowning out the mopeds and tourist chatter beyond its fortified walls, still bearing the scars of wartime Europe.

‘A nineteenth-century Baedeker’s guidebook, after recommending a visit by moonlight, nonchalantly advises that “for the ascent of the dome a special permesso must be obtained,”’ writes Donovan. That is not to say the journey up the Pantheon wasn’t without its risks. Differences in temperatures between the building’s cool interior and warm exterior create drafts that could easily suck someone through the opening towards a fatal drop. To avoid this, visitors had to crawl on their stomachs towards the edge of the hole, almost nine metres in diameter at the top of the dome, or cupola. 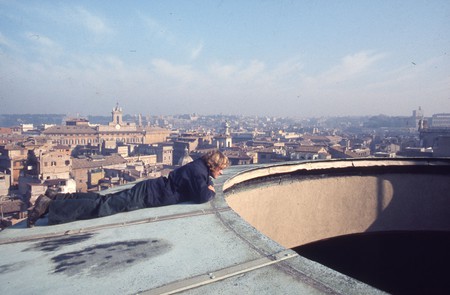 A Fellow from the American Academy in Rome peers down through the Pantheon’s oculus from the roof, circa 1975 | © Frank Baker Holmes

In Donovan’s book, one visitor recounts the short walk as a hard, vertigo-inducing experience, ‘a bit like rock climbing up a slope on a hike in the Appalachians’. Once the exterior stairs end, ‘a climber feels utterly precarious’. At some point in the mid-70s, those in charge at the Pantheon decided visitors would no longer be allowed onto its roof, perhaps to better preserve its ancient façade, more likely to avoid a tragedy.

Today it is still an incredible sight to behold, truly one of ancient Rome’s greatest achievements and well worth a visit, not least because entry is free. Built by the Roman statesman, general and architect Marcus Agrippa between 25 and 27 BC, it was originally a temple to the 12 Gods. Even the name Pantheon is taken from the Greek meaning all of the gods. Over the centuries it underwent a number of transformations and in 608 AD Pope Boniface IV made the Pantheon a Christian church, by burying the remains of hundreds of martyrs within its walls. 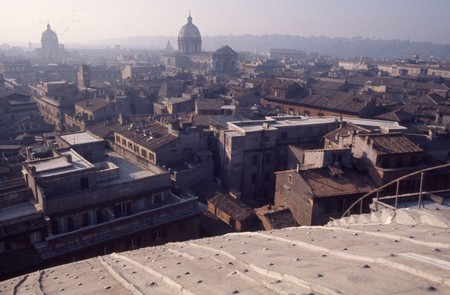 A view of Rome from the Pantheon’s roof, looking southwest toward Sant’Andrea della Valle church, circa 1975 | © Frank Baker Holmes

The former temple was named the Basilica of Saint Maria and Martyres and today is the final resting place of the great Renaissance painter Raphael, whose artworks are highly coveted by art institutions for their beauty. The Pantheon holds regular public church services, which even for those who practise a different faith, are agnostic or atheist is a truly transcendent experience.

In his book Four Seasons in Rome, author Anthony Doerr – of All the Light We Cannot See fame – describes the experience of watching snow fall through the oculus as one of the rarest and most magical sights on earth. The genius of its design clearly standing the test of time and finding new ways to excite and inspire people every day, even if its most famous feature remains just out of reach, for now. 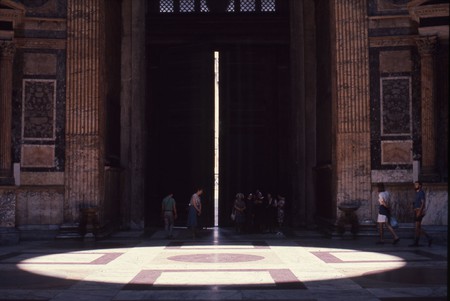 A disc of light from the oculus displayed on the Pantheon’s marble floor, circa 1975 | © Frank Baker Holmes

Interested in forbidden treasures? Read about Varosha, Cyprus once the jewel in the Mediterranean’s crown and now off limits to tourists. Heading to Rome soon? Then check out our guide to the Best Restaurants in Trastevere, and the Top 10 Things to See and Do while in the Eternal City.