The Most Inspiring Literary Landmarks In Rome 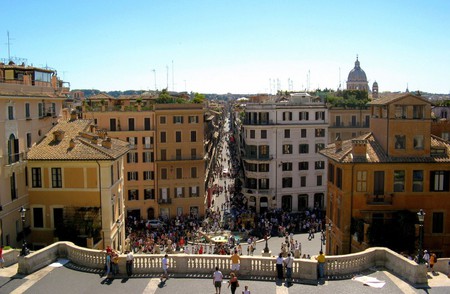 With its remarkable history of cultural achievements and longstanding position of artistic influence, Rome has not only fostered its own local creative communities over the centuries, but has also attracted and inspired countless artists who came to spend time in the capital. Among these are a number of celebrated literary figures, historic and contemporary alike, whose footsteps through the city can still be traced; bibliophiles and aesthetes should check out these noteworthy spots.

Perhaps the most famous literary landmark in the Eternal City is the Keats-Shelley Memorial House located right beside the Spanish Steps. This house/museum commemorates English Romantic poets John Keats and Percy Bysshe Shelley, both of whom spent time in Italy and Rome during their short lives. John Keats moved to Rome in November 1820 in an effort to be cured of tuberculosis with Rome’s Mediterranean climate, but his health continued to worsen and he died a few months later in February 1821 at the age of 25. The house contains extensive memorabilia, letters, manuscripts and works of art of both Keats and Shelley (a close friend living in Pisa at the time), as well as other important writers of the time. Percy Bysshe Shelley also had an untimely death, drowning off the coast of northwestern Italy in 1822 just before his 30th birthday. Both poets are buried in the Protestant Cemetery located behind the large pyramid in Rome’s Ostiense neighborhood.

The great English poet Lord Byron, née George Gordon Byron, was also part of the Romantic movement and remains a widely read and influential literary figure to this day. He traveled across Europe and spent seven years in Italy, primarily in the north including Venice, Ravenna and Pisa, where he spent time with Percy Bysshe Shelley. In Porto Venere, located below the Cinque Terre along the Ligurian Coast, there is even a cove named ‘Byron’s Grotto’, which is believed to have inspired some of his writings. Byron famously drank his coffee at the opulent Antico Caffé Greco located along the posh Via dei Condotti.
Antico Caffé Greco: Via dei Condotti, 86 +39 06 679 1700

Although the German writer and statesman Johann Wolfgang von Goethe only spent a couple of years in Italy, his time in the peninsula greatly influenced his aesthetic and philosophical ideas. Best known for his novel The Sorrows of Young Werther (1774), which brought him recognition in the Sturm und Drang pre-Romantic literary and musical movement in Germany, Goethe was particularly inspired by the south and famously commented ‘To have seen Italy without having seen Sicily is to not have seen Italy at all’. He spent 1786 to 1788 in Italy and his house in Rome, the Casa di Goethe, along the busy Via del Corso, has been turned into a museum paying testament to his love of the fine arts. On display are his Italian drawings and sketches, letters and diaries, and a kaleidoscopic painting of the writer by Andy Warhol (1982).

Goethe by #AndyWarhol. I was happily surprised to find a bit of the 20th century at the Casa Di Goethe on via Del Corso, who woulda thunk it? #meetrome #artwatchers

Stendhal, the 19th century French writer renowned for his character analyses and realist novels, is most frequently referenced in relation to Stendhal syndrome. This ‘condition’ was coined by an Italian psychiatrist in 1979 in reference to the psychosomatic conditions Stendhal felt when he first arrived in Florence. Stendhal wrote, ‘I was in a sort of ecstasy…absorbed in the contemplation of sublime beauty’ and referenced palpitations of the heart. This kind of emotional response to being overwhelmed by splendor and joy is commonly attributed to the writer who expanded on these feelings in his book Rome, Naples, and Florence. Stendhal syndrome can affect you anywhere, but a safe bet would be at a terrace or garden that affords the most stunning views of Rome.

Jumping ahead a few centuries, Pulitzer Prize winning author Nilanjana Sudeshna ‘Jhumpa’ Lahiri is one of the latest distinguished writers to call Rome her (second) home. Though born in London, she considers herself Indian American and has felt a particular draw to Italy, even moving to the country to learn Italian and cataloguing her struggle with the language in her nonfiction debut In Other Words (2016). She recalls her first visit to Rome in 2003, saying ‘I felt a sense of rapture, an affinity. I seemed to know it already. After only a few days, I was sure that I was fated to live there.’ Jhumpa Lahiri spent a couple of years living in Trastevere and then on the elegant Via Giulia street in the historic center. She is currently back in the United States and teaches a course on creative writing at Princeton University.

A beautiful Sunday in Roma filled with long lunches, longer strolls, and an extra glass of wine 😉all smiles on one of my favorite streets in Rome! #theromanguy #italyourway . . . .