The Fountain of the Frogs and the Little Fairy Villa | Courtesy of Camilla Colavolpe
In many parts of Italy, Art Nouveau architecture took its name from the London variety shop Arthur Lasemby Liberty, famous for its Far East memorabilia. If you find yourself in the capital looking for unexpected sights, where flamboyant artifacts hide between more classic shapes, read below for places you should not miss.

Building
Villa Ximenes | Courtesy of Camilla Colavolpe
Just behind a small tattered gas station on a highly congested square in the Nomentano district you will encounter Villa Ximenes, built in 1902 for the famous sculptor Ettore Ximenes. With its white-stoned façade adorned with flamboyant plastered decorations created by Ximenes himself, this building expresses all its unbridled Liberty character. Sold in the 1930s, it has faced many architectural changes, not always respectful of this one-of-a-kind example of Sicilian Liberty. However, today you can enjoy the chiseled building surrounded by luxurious orange trees gleaming in the sunset pink light of Rome.
More Info
Open In Google Maps
2 Via Bartolomeo Eustachio, Roma, Lazio, 161, Italy

Widely remembered for being both one of the last artworks signed by Master Michelangelo Buonarroti and for having served as the background of the Capture of Rome (September 20, 1870) before the unification of the country, the Porta Pia area is less known for its extremely high industrial archeologic heritage value. Since the first decades of the 20th century until its dismantling in the 70s, this strategic area hosted a famous beer factory in its Liberty buildings, which today remain as witnesses of a past industrial glory. 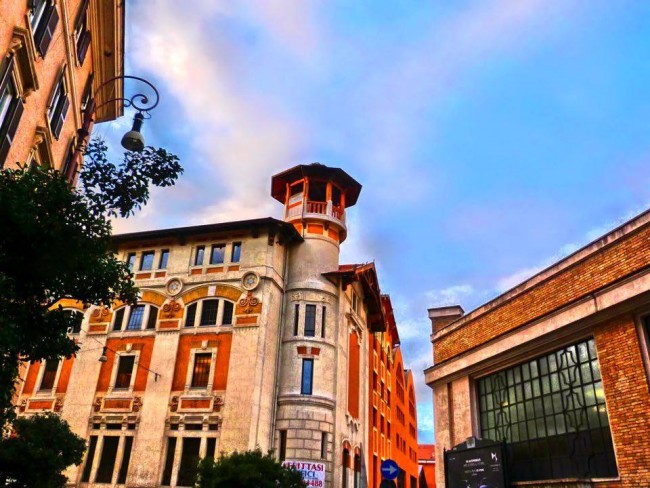 Museum
Casina delle Civette | Courtesy of Camilla Colavolpe
Villa Torlonia is an off-the-beaten-track park where the neoclassical features of the main buildings create a pleasant contrast with the unique tiny house located on the edge of the park, now named Casina delle Civette (or “The Tiny House of the Owls”). Originally conceived as a sweet escape from the central residence in the late 1880s, this little building went through a massive restoration around 1915, which turned it into one of the most characteristic Liberty examples in Rome. Turrets, arcades and wide stained-glass colored windows – especially the one depicting owls with ivy shoots designed by the famous artist Cambellotti – started to reshape the building. Taking a stroll in this fairytale park during a sunny day is highly recommended.
More Info
Open In Google Maps
70 Via Nomentana, Roma, Lazio, 161, Italy
+39060608
Visit website

Building
The Doria district, also known as “Coppedé” after its architect, is a little squared area out of any city-planning logic ever seen in Rome. The headquarters of embassies and many great artists, you can enter this astonishing area through an arch from which hangs a wrought iron chandelier. Here, around 30 buildings are staggered around Piazza Mincio and its Fountain of the Frogs, proudly embellished by eclectic decorations. From faithful reproductions of movie scenographies (like the 1914 film Cabiria) to cultural or flowery references depicted on the walls, each building hides details waiting to be discovered.
More Info
Open In Google Maps
Rome, Italy
Book Now

Cinema, Theater
Teatro Ambra Jovinelli | Courtesy of Camilla Colavolpe
From hosting famous actors – like Totò – in the aftermath of WWI to becoming a red light cinema in the 70s and then reduced to ash by an arson in the 80s, this Liberty-styled theater definitely experienced several twist and turns since its establishment in 1909. Purchased by a Milanese company in 1990, it was left in limbo until a bunch of young artists took the lead in organizing theatrical works, bringing back the public’s attention to the theatre. This notable pressure pushed the owner to renovate it. The new opening took place on January 25, 2001.
More Info
Open In Google Maps
45 Via Guglielmo Pepe, Roma, Lazio, 185, Italy
+390683082620
Visit website

Just a stone’s thrown away from the iconic Spanish Steps lies the Teatro Salone Margherita, whose flamboyant interiors welcomes one of the most sublime examples of a café chantant in Rome. A cultural space, indeed, it is also where the founder of the Futurist movement, Filippo Tommaso Marinetti, presented a variety show inspired by those literary standards. 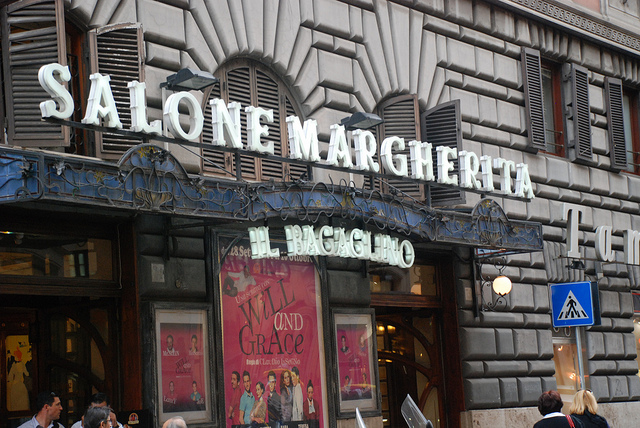 Synagogue
Great Synagogue of Rome | © Matthew Black/Flickr
The Synagogue of Rome and its squared dome are definitely a charming addition to the city skyline since its establishment in 1904. Its Babilonese features, uniquely blended with Liberty style, are a refined reference to the common Middle Eastern origins of these people. Designed by Vincenzo Costa and Osvaldo Armanni – pupils of the architect Guglielmo Calderini who designed the Palace of Justice of Rome – the interiors were commissioned to several Liberty artists like painters Domenico Bruschi and Annibale Brugnoli. Fun fact: the stained-glass windows were designed by Cesare Picchiarini who worked with Cambellotti at the Casina delle Civette/Villa Torlonia.
More Info
Open In Google Maps
Lungotevere de' Cenci, Roma, Lazio, 186, Italy
+390668400661
Visit website

The Non-Catholic Cemetery for Foreigners in Testaccio

Memorial
Non-Catholic Cemetery - detail | © Ilaria Ingravalle
Heading south towards the Pyramid of Cestius (18-12 BC) in the industrial area of Ostiense, a glorious urban site well known as the Non-Catholic Cemetery of Rome lies undisturbed. Here, great poets such as Keats, politicians like Gramsci, diplomats, painters and sculptors found their final resting place. Speaking of Liberty, somewhere in the backyard lies the splendid and elegant family grave of the famous American explorer, Thomas Jefferson Page – designed in Liberty style by the sculptor Ximenes.
More Info
Open In Google Maps
6 Via Caio Cestio, Roma, Lazio, 153, Italy
+39065741900
Visit website
Book with our partner and we will earn a small commission.