EUROPE
/
ITALY
/
VERONA
/
Things to Do

The Most Beautiful Buildings in Verona, Italy 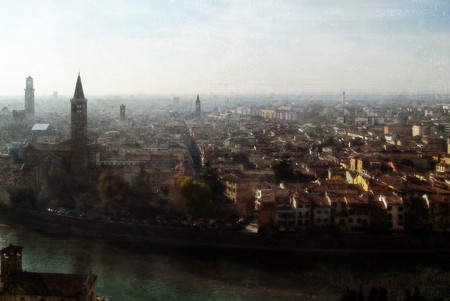 Verona is an incredibly charming city full of architectural delights. The city has a long history stretching back to ancient Rome and plenty of beautiful buildings. In one moment, you can be at the Arena, where slaves fought one another to death for the entertainment of the crowds, and the next moment, you’re at Juliet’s house, where the romantics congregate to get a bit closer to Shakespeare’s love story.

This imposing fortress on the river belonged once to the ruling della Scala family but now hosts the civic art collection. The museum space was designed by 20th century architect Carlo Scarpa, making it a lovely mix of medieval and modern. You’ll also get incredible views of the city from the top of the building.

Built in the first century, the Verona Arena is an open-air Roman amphitheater that’s the third largest structure of its kind in the world – and the best-preserved. Its many-tiered elliptical shape provides excellent acoustics, and along its circumference are two levels of arches built from the distinctive pink and white stone from nearby Valpolicella. It’s a wonderful place to spend a long summer evening.

This 84-meter structure was erected by a powerful Italian family, with construction beginning in the 12th century. Its two bells, the Rengo and the Marangona, would ring to denote different times in civic life. You can scale the tower by elevator or spiral staircase to get a breathtaking view of the city.

The 13th-century building designated as the house of Shakespeare’s timeless romantic heroine has an easy charm that draws crowds of visitors year-round. The house once belonged to the Dal Cappello family, which isn’t quite Shakepeare’s Capulet, or the Capelletti of earlier Italian versions of the story, but close enough. The balcony itself is actually a later addition put in during restoration work in the early 20th century from the remains of another medieval palace, around the same time that the bronze sculpture of Juliet was commissioned for the courtyard. But no matter, throw yourself into the fantasy! Come to write a note to Juliet and dream of the kind of love that can defy the stars.

The #balcony for #lovers #Verona #Italia

This gorgeous Romanesque basilica was built in the 12th century, but its core dates back to as much as 1,500 years ago. It’s a truly magical place, with the stained glass rose window, elaborately crafted bronze doors, colorful early Renaissance frescoes and a breathtaking main triptych by Andrea Mantegna. It’s a dark and delightful piece of medieval and Renaissance workmanship.

These Gothic funerary monuments mark out the legacy of an important ruling family in Verona’s long history — the della Scala. They truly pulled out all the architectural stops on this mausoleum, which is a lacy, marble-covered symbols of that empire of power and wealth.