The Long Psalm Of Jude Law: Why 'The Young Pope' Is An Epic Must-See 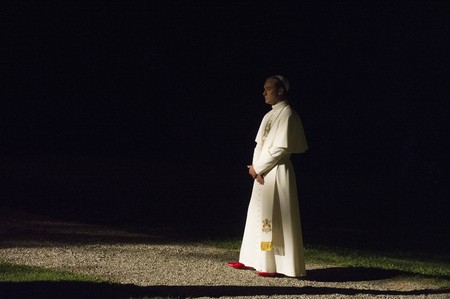 When it was announced that Jude Law would be playing a fictionalised pontiff in Paolo Sorrentino’s The Young Pope, it’s fair to say there were a few doubts raised. We’ve just seen the first episode of the mammoth HBO/Sky Atlantic series, and predict a hit of biblical proportions. 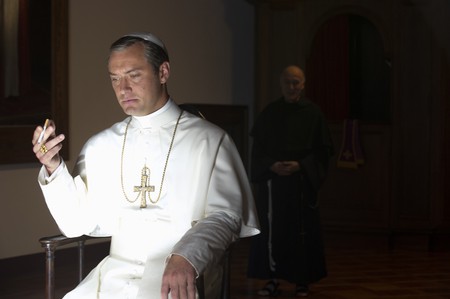 Jude Law as The Pope

He drinks. He smokes. He plays tennis. This is the pope as you’ve never seen, or even imagined him before. Playing Lenny Belarado as a 47-year-old American who has manoeuvred his way to the highest position with the Catholic church, Jude Law oozes charisma in the title role. We join him on the eve of his first address, wrestling with internal demons pulling him in every direction.

Law can be a tricky actor to warm to on screen. As Alfie he has the requisite sex-appeal needed for the remake of the Michael Caine classic, but lacked screen presence. His performance here requires a blurring of the line between ‘good’ and ‘evil’, with the constant being a need to command every scene and demand the viewers’ attention. 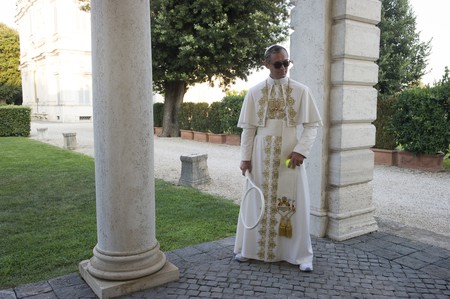 The British actor still gets to play it cool, Lenny isn’t going to change much now that he is in the ultimate position of power, yet Law also shows a real relish in delivering some withering put-downs to those around him who are keen on politicking into his good books.

Of his previous performances, there is a hint villainy from The Road To Perdition and a dash of his Errol Flynn in The Aviator. All things considered, this is Law’s most memorable, and enjoyable screen appearance to date.

A big reason for the interest in The Young Pope is helmer Paolo Sorrentino. The Italian director has previously made feature films The Great Beauty and Youth, and this series feels like a stylistic extension of his previous work. 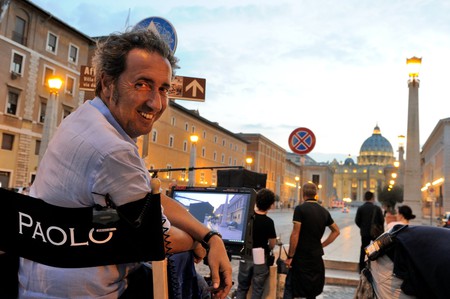 set of "The young Pope" by Paolo Sorrentino. | © Gianni Fiorito

The languid camerawork of his previous films is on show, as are the overlaying edits combining dialogue with bizarre, occasionally fanatical images.

Sorrentino manages to find beauty in the most mundane of settings, and when given the access he has to The Vatican and Rome, The Young Pope looks every bit as good as the films he has made in recent years.

Many other TV series have big names attached only for them to have a passing connection to the finished product, but Sorrentino has his hands all over this, directing all of the first season as well as writing the episodes too.

The Corridors of Power

Sorrentino has said that the series is about “the clear signs of God’s existence. The clear signs of God’s absence. How faith can be searched for and lost. The greatness of holiness, so great as to be unbearable when you are fighting temptations and when all you can do is to yield to them. The inner struggle between the huge responsibility of the Head of the Catholic Church and the miseries of the simple man that fate (or the Holy Spirit) chose as Pontiff. Finally, how to handle and manipulate power in a state whose dogma and moral imperative is the renunciation of power and selfless love towards one’s neighbour.” 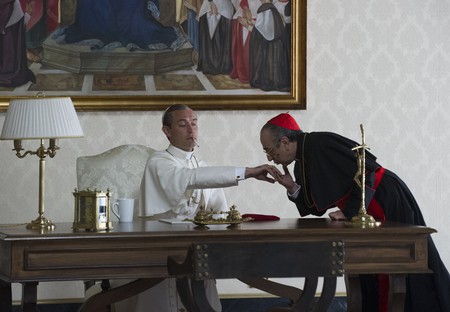 Clearly the politics of office plays into the plot to a great extent, and this is clear from the very first moments of the show. Silvio Orlando’s Cardinal Voiello is chief amongst the movers and shakers within the Vatican, but his glee at getting in someone he thinks he can manipulate is short lived when Law’s Pius XIII proves to have ideas of his own.

Lenny brings in the formidable Sister Mary (Diane Keaton) as his aide, and their longstanding relationship with one another is explored via flashbacks as we see the new pope during his childhood being taken under the wing of the caring nun in America.

A wildcard is Cardinal Michael Spencer (James Cromwell), who had been favourite for the position of pope until a late shift in favour of Belarado. Initially suicidal over the decision, and later seen as a bitter and vengeful force, Spencer refuses the generous offers made by his protégé (the cardinal had trained Lenny for many years).

The dynamics between all the principal players is fascinating. 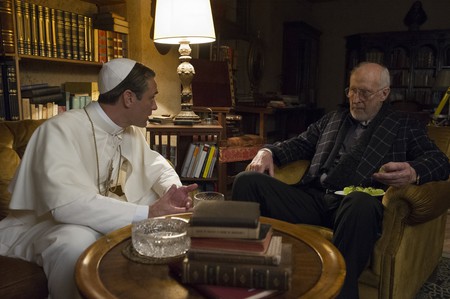 The look of The Young Pope is deliberately skewed towards stunning visual set pieces. The opening shot sees the camera pan over a pile of babies from which Jude Law’s Pius emerges to make his first address to the assembled masses below the Vatican balcony. It turns out that this is a dream sequence, and it catches the viewer off guard.

This tone, veering from austere to bizarre and back again, is a recurring theme. There is a yet-to-be explained sideshow that sees a kangaroo delivered to the pope by a dignitary that is released to run wild within the gardens of the Vatican itself.

Moreover, Law is immaculately dressed throughout, both in his casual all-white tracksuits to his flowing robes that are perfectly fitted to his slender frame. We learn he has “very little appetite for anything”, and hence his ability to glide into a room is similar to that of a supermodel powering along a catwalk. 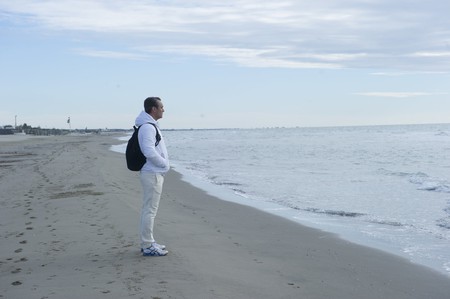 Jude Law in his casuals in The Young Pope | ©

This is where the show unexpectedly excels. The slap downs that Pius XIII regularly delivers are wonderfully crafted, and Law is clearly having a lot of fun playing the vindictive pontiff.

Lenny isn’t just the perpetrator though; he sometimes falls victim to some brutal takedowns, too.

James Cromwell scythes down the young pretender when Belarado comes cap in hand looking for help. The loneliness he feels is highlighted by Spencer, a knowing dig meant to hurt the isolated pope.

Pay close attention to all the words and even the inflections, as Sorrentino has layered the script with dense irony throughout.

The Young Pope is on Sky Atlantic now and will be broadcast in the US next year.