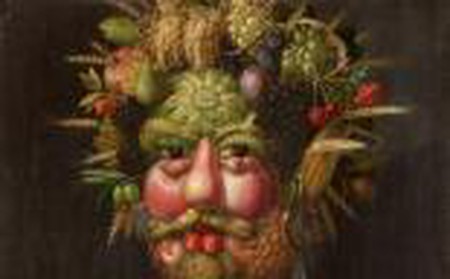 Contemporary society loves the weird and the wonderful, but this wasn’t always the case. The work of 16th century artist Giuseppe Arcimboldo is bizarre enough to match 21st century expectations. We investigate how his audience reacted to these strange visions. 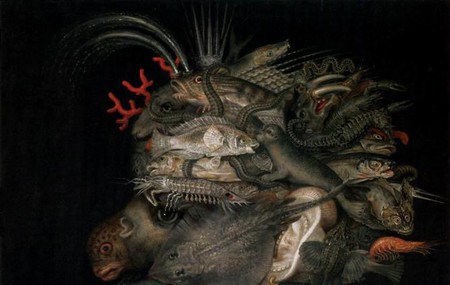 Giuseppe Arcimboldo (1527-1593) is best known for his allegorical “composed head” portraits, with Vertumnus: Portrait of Rudolph II being the most outstanding example. Nothing in the life of Giuseppe Arcimboldo, born in Milan in 1526, provides a clue to the source of these ideas. His father was an artist, and Giuseppe’s early career consisted of designing stained glass windows for the Milan Cathedral (Duomo) from 1549. In 1558, he drew the caricature for a large tapestry representing the Dormition of the Virgin Mary, which is preserved to this day in the Como Cathedral. In this classic Renaissance scene, some quirky faces take the form of Ancient Roman-style masks of elderly men. In the lower half, the headdress feathers identify a female face as an American Indian, as seen in the Renaissance. The head emerges from a huge ribbon with a knot on the side and tops a diminutive bust that looks more like an abstract ornament than part of the human body. 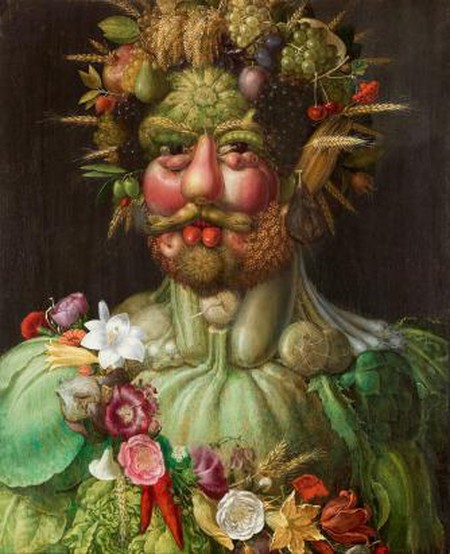 This use of quirky imagery became more pronounced in Arcimboldo’s work, and suggests that the traditional aesthetic of the Renaissance was becoming too restricting. Luckily for Arcimboldo, his career made a U-turn when Maximilian II, the Hapsburg Archduke and soon-to-be Holy Roman Emperor, welcomed the painter in his Vienna court in the early 1560s. Arcimboldo became the Renaissance court portraitist, to produce the likenesses of his sovereigns to display at the palace and to give to foreign dignitaries or prospective brides. Within a decade, Arcimboldo had made the jump from lighthearted whimsy to outlandish weirdness, with the first known composite heads presented to Maximilian on New Year’s Day 1569. In 1590, Giuseppe Arcimboldo painted his royal patron, the Holy Roman Emperor Rudolf II, as a heap of fruits and vegetables. In any normal position severe consequences may have been expected, yet the Hapsburg family and the reign of Rudolph II were highly receptive to his imaginative pieces. 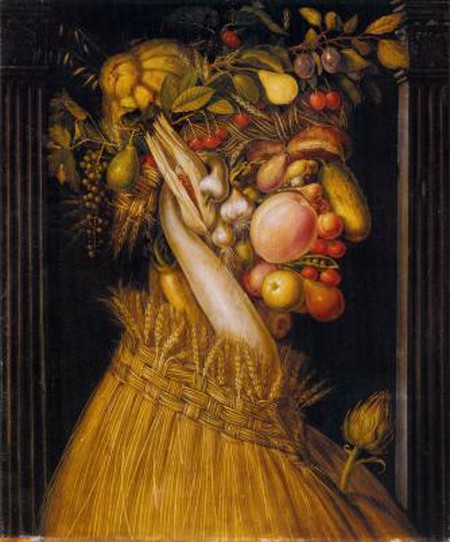 Arcimboldo went on to serve the Hapsburg family for more than 25 years, creating his bizarre “composite heads” made of sea creatures, flowers, dinner roasts and other materials. One set of paintings was called The Four Seasons, and the other The Four Elements, which explored the elements of earth, water, fire and air. The allegorical paintings are bursting with visual puns (Summer’s ear is an ear of corn) as well as references to the Hapsburgs. The nose and ear of Fire are made of fire strikers, one of the imperial family’s symbols. Winter wears a cloak decorated with the letter M, presumably for Maximilian, that resembles a garment the Emperor actually owned. Earth features a lion skin, a reference to the mythological Hercules, to whom the Hapsburgs were at pains to trace their ancestry. Many of the figures are crowned with tree branches, coral fragments or stag’s antlers. The botanical details incorporated exotic specimens, such as corn and aubergine, which sophisticated viewers would recognise as rare cultivars from the New World and beyond, where so many European rulers hoped to extend their influence.

There has been speculation among many art historians suggesting Arcimboldo may of been suffering from some form of mental illness. With the portraits within the context of the Hapsburg court, this can be easily noted that the artist was solely creating works to please his employers. In fact, Maximilian liked this imagery so much that he and other members of his court dressed up as the elements and seasons in a 1571 festival orchestrated by Arcimboldo.

Under Rudolphine’s rule, Prague became one of the foremost centres for arts and sciences in the European continent. Some of the most important artists, scientists and scholars came together to collaborate, earning Prague the designation Parnassus of the arts. In this inter-disciplinary atmosphere, Arcimboldo flourished. This was the dawn of disciplines such as botany and zoology, when artists including Leonardo da Vinci (Arcimboldo’s predecessor in Milan) pursued natural studies. Arcimboldo was always up to something capricious or whimsical, whether it was inventing a harpsichord-like instrument, writing poetry or creating costumes for royal pageants. He likely spent time browsing the Hapsburgs’ private collections of artworks and natural oddities in the Kunstkammer (Art Room), considered a predecessor of modern museums. 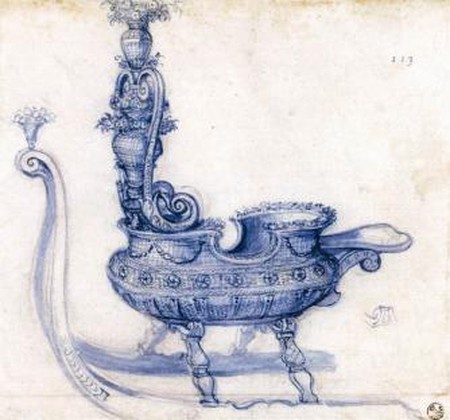 Giuseppe Arcimboldo, Sketch for a Sleigh Shaped like a Basket of Flowers, 1585 | WikiCommons

Arcimboldo remained with the Hapsburgs until 1587 and continued to paint for them after his return to Italy. Arcimboldo’s long absence from Milan coincided with the reign there of an especially humourless Milanese archbishop who cracked down on local artists and would have had little patience for produce portraiture. Though popular in his lifetime, Arcimboldo’s work fell out of fashion after his death. It was not until the 20th century that his paintings attracted new interest, having a significant influence on the Surrealism movement and the work of Salvador Dali.