The Evolution of Roman Street Food 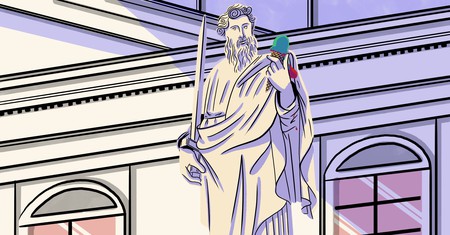 In Rome, street food leads the culinary scene; here, Culture Trip explores the creation of the most iconic Roman dishes to eat on the go.

While Romans relish a lazy Sunday lunch, they also have a penchant to eat on their feet: ask any local to rattle off the capital’s classic dishes and fried street food treats like supplì (rice balls with tomato sauce) and filetti di baccalà (fried salt cod fillets) will inevitably top the list. The culinary tradition’s roots prove as ancient as the city itself: during the Roman Empire, ambulatory vendors would hoof it through bathhouses and amphitheaters hawking fried fish, salted peas and other on-the-go snacks. To the south, early “take-out” restaurants dubbed thermopolias also enjoyed success among the lower classes whose homes lacked hearths to cook. The poet Martial (c. AD 40- 105) even alluded to Roman street-food staples like “warm chickpeas” and “smoking sausages served from warm pans.” Street food persevered in the Eternal City, most notably throughout the Jewish ghetto during the 16th century. Left with limited ingredients, inhabitants would fry fish and vegetables in communal vats of oil outdoors.

While street food once fed those on a budget, it eventually began to cater to a working population that was on the go with little time to prepare a homemade lunch. “Between the ’70s and the ’90s pizza in teglia, or electric-oven baked pizza began its ascent in the city’s food culture,” says Panebianco. With them came tavole calde, literally translated as “hot tables,” brimming with fried treats, pizza, and take-away pastas. 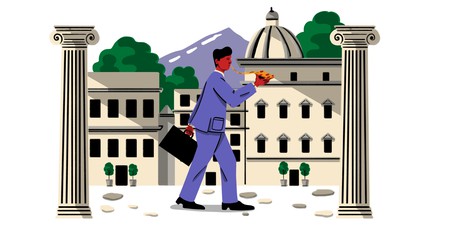 Over a decade since its debut in the Testaccio neighbourhood, the trapizzino (triangular pizza pocket) has firmly cemented itself as a street food titan. “This pizza pocket is crunchy on the outside and warm and fluffy on the inside, generously stuffed with sauces and homespun dishes of the Roman an Italian tradition, like chicken cacciatore, meatballs, or picchiapò (boiled) beef” explains Panebianco. The dish – invented by pizza chef Stefano Callegari – has proven a smashing success in the Eternal City where it boasts a flurry of locations, but also in Milan, Turin, Naples and the Big Apple. “Romans are usually wary of food trends and changes, but the trapizzino appears to be the exception,” says Panebianco.

Thick slabs of cod battered and rustled in the fryolator until golden, filetto di baccalà reigns as the undisputed forefather of Roman street food, hailing back to ancient times. Unlike its peers, this dish has remained relatively unchanged for centuries. “The piping hot battered cod fillets fried in the back and sold for €4 (£3.65) at Dar Filettaro a Santa Barbara are my religion,” says Baldwin. Grab yours wrapped in parchment paper to go. 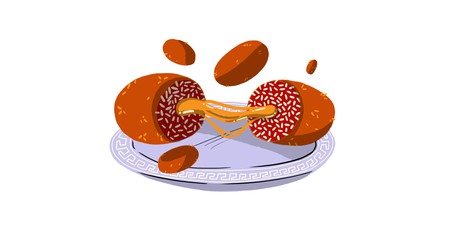 Not to be confused with arancini (deep fried rice balls), supplì – rice balls streaked with ragu and a gooey mozzarella heart, bread-crumbed and fried – are as intensely Roman as the Colosseum. Chef Dandini’s Supplizio dotes exclusively on this edible icon. “I decided to open Supplizio to give a certain ‘dignity’ to the so-called poor dishes of street cuisine,” he explains. Despite fronting his own fine dining restaurant, the renowned Arcangelo, he claims he approaches both restaurants with the same philosophy. “I take cooking a lobster just as seriously as I take preparing a supplì. It’s actually quite complex in its simplicity.” Dandini’s menu boasts the classic recipe along with carbonara, butter and anchovy, and cacio e pepe (cheese and pepper) versions. Visit his two locations on Via di S. Francesco a Ripa, 1 in Trastevere and Via dei Banchi Vecchi 143 in the historic center.

Unlike its round, oven-baked predecessor, pizza al taglio (pizza by the slice) is shimmied into an electric oven and sold by the slice, a fast and filling meal on the go. Choose how big you want your piece to be – staff will hover a knife above the pizza and wait for your ok before portioning it out – and have it prepared da portare via (take away style) wrapped in wax paper with the edges sticking out so you can graze as you stroll. Panebianco recommends Cresci near St Peter’s Basilica and Pizza Zazà off Piazza S Eustachio, while Baldwin champions Antico Forno Roscioli “for their plain rossa (red) and their bianca (white) stuffed with silky mortadella.” She also suggests La Boccaccia in Trastevere for “the creative toppings.” Dandini, meanwhile, suggests Pizzarium. Helmed by Gabriele Bonci, the store was the first to pioneer a refined take on pizza al taglio. While their margherita never disappoints, come here for inspired combinations like persimmon and spicy nduja (spreadable pork) sausage or smoked trout with capers and stracciatella. 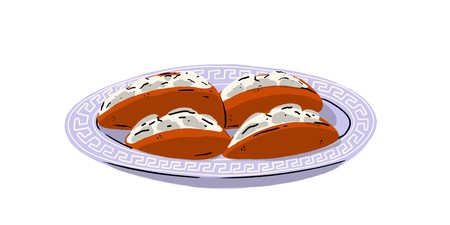 Rome’s favorite guilty pleasure – a golden pastry bun split down the middle and dolloped with whipped cream – enjoys an equally sweet origin story. Legend has it that Romans would propose to their brides-to-be with an engagement ring hidden inside the cake (in fact, maritozzo derives from marito, the Italian word for husband). While maritozzi star on the breakfast plates of Roman locals, the sweet also moonlights as street food after hours. “From the ’90s onwards the maritozzo has been what you savor after a night out dancing and drinking,” divulges Panebianco. Join in the late-night revelry at Il Maritozzaro. Recently, the maritozzo has begun to explore its savoury side: newbie spots like Marì and Il Maritozzo Rosso, sling maritozzi crammed with eggplant caponata, oxtail and ciauscolo sausage.

The art of sorbet making was already well underway in Italy in the middle of the 16th century; a description of a “milk sorbet that is first cooked,” essentially the earliest official mention of gelato, also makes an appearance in Antonio Latini’s 1692 ‘Treatise on Various Kinds of Sorbets, or Water Ices.’ Gelato in Rome now spans far beyond classics like chocolate and pistachio, with gelatieri (ice cream makers) dreaming up offbeat flavors for the past decade. “Otaleg is hands down my favorite gelateria,” shares Baldwin. Besides her favorite, licorice, the gelateria also proposes lemon and basil, parmesan and balsamic, and gorgonzola with sundried tomatoes. If you’re more of a purist, check out Giolitti in Testaccio on Via Amerigo Vespucci 35, (don’t confuse it with the splashy gelateria of the same name in the historic center) where lovably grumpy staff scoop traditional flavors in an old-school setting.