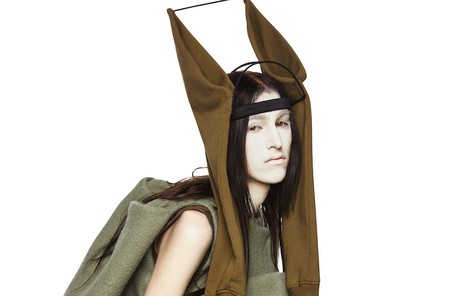 ‘I’ve always said that the creative expression is the opposite of death… it’s hope.’ writes American designer Rick Owens ahead of his new exhibition opening in Milan this month. Subhuman, Inhuman, Superhuman sees the designer merge his two creative outlets of furniture and fashion design.

Presented as a Gesamtkunstwerk, the show will blend a selection of pieces from Owens’ archives with new sculptural work, offering a complete survey of his aesthetic oeuvre from 1994 to present.

Owens is in many ways a maverick of the fashion industry, offering a dystopian and avant-garde vision on the one hand while simultaneously creating highly wearable pieces, typically energetic and American in their rendering. His distinctive style places bias cut hoodies, thickset trainers and top-heavy leather jackets alongside sleeveless black vests and high-waisted black scuba trousers – across both his mens and womenswear designs. Owens is a designer who takes on the ephemeral and doesn’t try to contain it; movement and change are always inherent in his constructs.

The arc of his aesthetic has also stayed within the experimental and sensitive, offering thoughtful silhouettes that range from the globular hoods of his AW02 show through to the gripping, amorphic designs of his SS18 collection – and in between offering upside down t-shirts and jackets, worn without pants – to the delight and horror of many attendees at his SS15 show.

His catwalk shows have also offered theatrics unparalleled by other designers, blending performance, dance, art and mixed media to create settings in which clothes part of a wider conversation; fashion for Owens exists within a rich cultural fabric. This belief manifests itself in the fact that Owens never advertises. In an industry where brand recognition is everything, his conviction in the power of his clothes and the way in which they are shown is impressive, and as it has turned out, well supported: Rick Owens is a multi-million dollar corporation, and the designer has an 80% share in OwensCorp.

Born in Porterville just outside LA, in 1962, Owens grew up as a single child in a strict Catholic family with deeply conservative values. Owens left Porterville to study at Otis College of Art and Design, before dropping out to start working as a pattern cutter who replicated designer clothes. Unlike many of his peers, Owens’ entrance to ‘high fashion’ started from the very bottom, as he built his initial knowledge of construction into one-off pieces for friends into a full blown collection. Charles Gallay, who owned a cult boutique in LA, bought half of Owens’ first collection upfront which allowed the designer to keep going. When Kate Moss wore one of Owens’ iconic leather jackets in 2001, the designer caught the attention of Anna Wintour and hype has continued to steadily build ever since.

Now based in Paris, Rick Owens has become a voice in the industry unafraid to break with convention, push boundaries or compromise. His SS14 show pre-empted conversations around diversity in fashion by eight seasons, while his AW12 show opened to a backdrop of roaring flames; models in the show also wore threadbare masks, a design which pre-empted Gucci’s most sought after look of this season.

His sculptural inclinations are translated into furniture with the same distinct aesthetic. In his designs, Owens renders weighty pieces with powerful precision and majesty – like his clothes there are tensions inherent in the work that make the viewer or wearer in many ways an insignificant part of the creation. That the new retrospective encompasses the extremities of what is and is not human feels apt indeed.