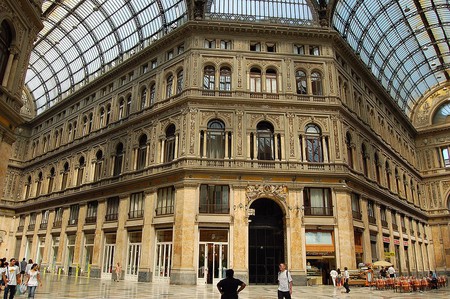 Galleria Umberto I - the scene of the crime | © Michael Paraskevas/WikiCommons

It appears festive cheer is in short supply in Italy this year. First, there was Rome’s sorry excuse for a festive fir, aka the saga of ‘Spelacchio’, and now Naples’ Christmas tree has been stolen less than a day after it was unveiled. Erected in Galleria Umberto I, the city’s most famous shopping arcade, the tree lasted just 16 hours before thieves hacked it down and made off with it, baubles and all.

The tree was erected thanks to Federazione dei Verdi, a green political party, and the historic Gran Caffè Gambrinus, located just a few minutes from the 19th-century shopping arcade.

It was officially unveiled in a small ceremony on Thursday and personal messages and seasonal wishes had been attached to its branches – one note even reading ‘Please do not vandalise this tree’.

Nevertheless it was chopped down overnight – the clean cut to the trunk suggesting the vandals used a chainsaw. Photos posted on Facebook on Friday morning by Green Party councilor Francesco Emilio Borrelli show just a few branches remaining and stray decorations scattered on the floor.

Just a few hours after the morning’s discovery, the tree was found dumped in an alley in the Quartieri Spagnoli – a poor and densely populated area of the city with links to organised crime.

Residents point the finger at one of the local ‘baby gangs’ – a colloquial term for gangs of young people – but there are no specific reports as to who is responsible just yet. According to a report in the Corriere della Sera, the security cameras in the shopping centre are currently out of action too.

Riccardo Pierantoni, who lives in Galleria Umberto, told the Corriere that the Galleria Umberto is ‘one of the most important monuments in Italy, located…300 metres from the Police Headquarters. Yet the place is in the hands of the baby gang that descends from the Spanish Quarters and plays football [in the shopping centre] every night’.

This is not the first time Christmas trees in Naples have been vandalised or misappropriated. In recent years police have found other stolen trees stashed in the Quartieri Spagnoli that they suspect were waiting to be burned as part as the traditional bonfires lit on January 17, the Feast of San’Antonio Abate.

Councilor Borrelli has called for a tougher approach to the troublemakers, saying, ‘it is time for us to stop with good-mindedness towards these little criminals and their families’.