The Best Things to See and Do in Perugia, Italy 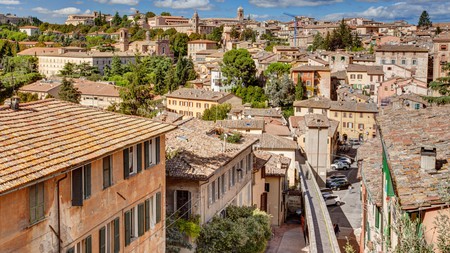 The biggest city in the central Italian region of Umbria, Perugia is celebrated for its magnificent old town, gothic main square, rich local delicacies and lively student population. Here are the top things to see and do while you’re there.

The capital of the Umbria region may not be as well-known as nearby heavyweights like Florence, Rome and Bologna, but that’s part of what makes it so appealing. Perugia holds its own when it comes to Italian cultural riches, with gothic architecture, Renaissance frescoes, ornate former palaces and cobbled squares populating the beautifully preserved historic centre. And thanks to a large, popular university within the city, a lively and youthful atmosphere is always within arm’s reach – particularly over an aperitivo in the bustling main piazza each evening. Here are the best things to see and do in Perugia, Italy. 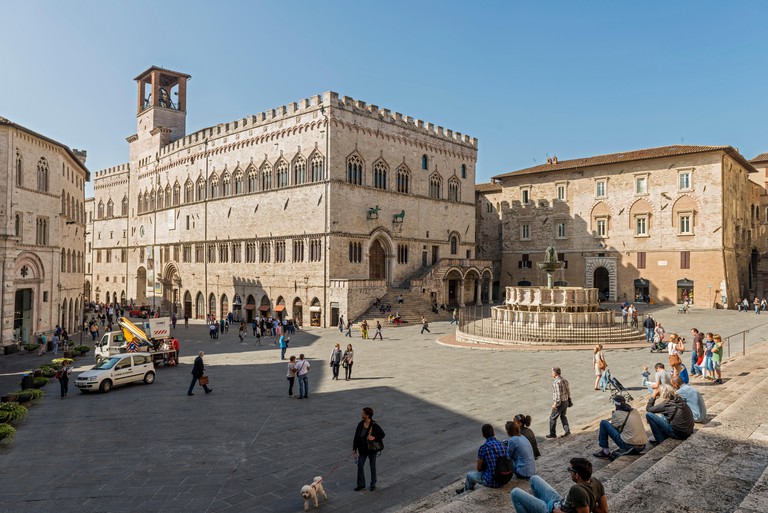 Learn how to sit back and watch life happen around you in this smart, spacious city square. There’s lots to discover about Perugia’s past if you’re in a learning mood, but more often than not the best option is to just kick back at one of the many restaurants or cafes, enjoying a long, lazy lunch or chain-drinking cappuccinos, while gazing out at city life. Pick a spot with a view of Fontana Maggiore, the piazza’s central medieval fountain, or keep yourself entertained by watching one of the many street performers that set up here.

Visit the National Gallery of Umbria 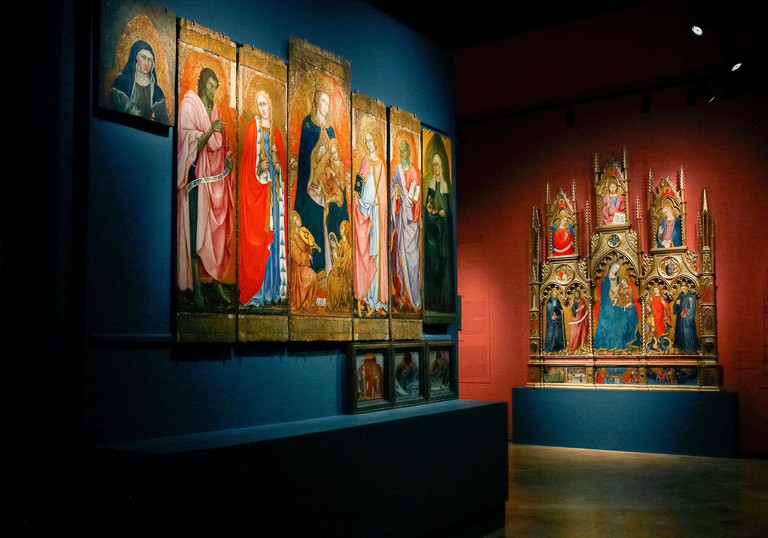 © RealyEasyStar/Claudio Pagliarani / Alamy Stock Photo
Just off the main square of Piazza IV Novembre, the gargantuan National Gallery of Umbria covers 4,000sqm (43,056sqft) over two floors and displays a vast selection of mostly medieval and Renaissance works, primarily from Umbrian artists across the ages. Alongside the extensive permanent collection sits a room for temporary exhibitions, and elsewhere around the gallery you’ll see displays covering jewellery, ceramics, sculpture and topography.

Local flavours and specialities are easy to come by in Perugia, so don’t waste any time getting stuck into the regional cuisine. A good starting point is strangozzi, a rustic pasta shaped into thick noodles, traditionally made with just flour and water. Popular additions include spoletina (tomatoes, garlic, olive oil and parsley) or black truffles, another Perugian favourite. Also made in Umbria is Pecorino di Norcia – a yellow, crumbly sheep’s cheese – and Italy’s beloved Baci chocolate “kisses”, which are made at the Perugina Chocolate House.

The countryside surrounding Perugia produces some excellent wines – particularly reds – so it would be a shame not to journey out of the city and sample them. Various tasting tours are available around the region, including at the Goretti estate, a family-run winery 20 minutes away from central Perugia by car, which offers a range of tasting experiences. It tastes all the sweeter when you’re looking over lush, rolling hills, carpeted in the vines that grow those juicy grapes.

Before you pay a visit to the National Gallery of Umbria, take time to stop and appreciate the building you’re heading into – which is a work of art itself. The gothic Palazzo dei Priori is one of the finest examples in Italy of a public palace and is striking to behold, with its crenellated roof and delicate, pointed windows. The story of its construction and subsequent extensions, rebuilding and decoration across the centuries – beginning in the late 13th century – is a fascinating one and deserves an hour or so of your time before you enter the gallery proper.

Look at the amazing churches 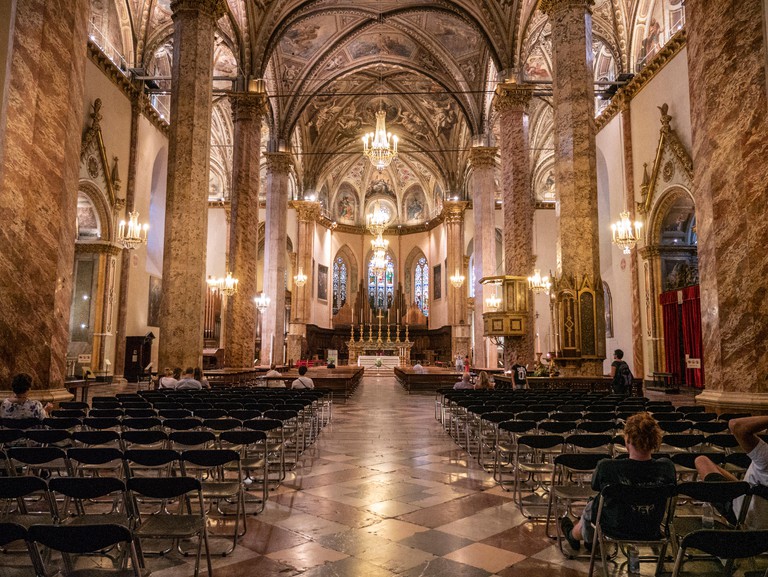 © Luca Dadi / AGF Srl / Alamy Stock Photo
Like so many Italian destinations, Perugia is home to a range of beautiful churches that are worth seeking out. Don’t miss the Cathedral of San Lorenzo, stretching out grandly across the top of Piazza IV Novembre and holding various renowned artworks in its gothic confines, such as Federico Barocci’s high-drama La Deposizione Dalla Croce. In contrast to the bold cathedral is the humble Chiesa di San Michele Arcangelo, set in a peaceful location north of the city centre and built in an unusual circular shape with a domed roof. It’s believed to be one of the oldest churches in the region.

Size matters when it comes to defence towers, which perhaps explains why this behemoth medieval structure was built to 42m (138ft) high. As such, it rewards those who ascend its 232 steps with fantastic views out across the city and beyond. As with so many buildings in Perugia, there’s a colourful and sometimes-bloody history attached to Sciri Tower. But even if you’re there purely for the views you’re in for a treat, particularly if you time your visit for sunset.

Walk the length of the Via dell’Acquedotto 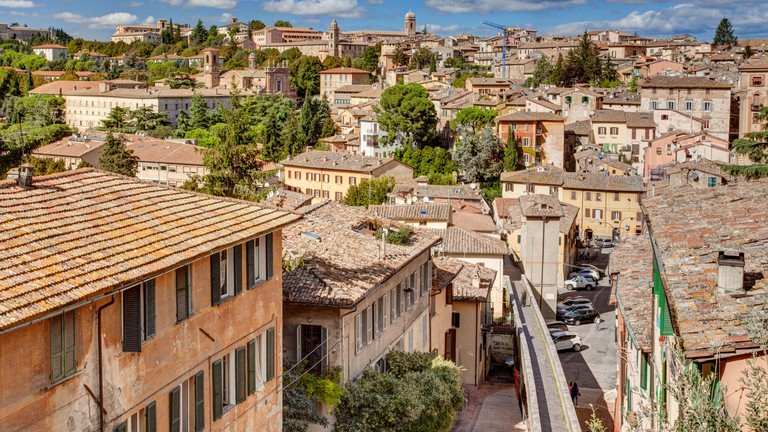 © John G. Wilbanks / Alamy Stock Photo
On paper, a medieval aqueduct may not sound like the most exciting of attractions. But this 2.5mi (4km) feat of engineering is guaranteed to impress all but the most-hardened sceptics. It was designed to allow water to flow ingeniously uphill to reach Piazza IV Novembre’s landmark fountain, Fontana Maggiore. Today, Via dell’Acquedotto is used mainly as a walkway that stretches through the city, marking out the perfect path for a not-too-long stroll.

Take a boat to the islands in Lago Trasimeno

As you may guess from its name, the 128sqkm (49sqmi) Lake Trasimeno is very much the centrepiece of the Parco Regionale del Lago Trasimeno. The drive from Perugia takes anywhere from 20 to 40 minutes, depending on which bit of the lake you want to get to. Wherever you choose to park up, factor in a boat trip to one of Trasimeno’s two visitable islands, Maggiore and Polvese – carpeted in forest and with serene lake beaches to sunbathe on, they make for a chilled family day out. Back on the mainland there are activities galore, from hiking and biking trails to wine tours and exploring the numerous lakeside towns. Castiglione del Lago, which juts into the water, is a particularly pretty spot.

Watch the sunset from Giardini Carducci 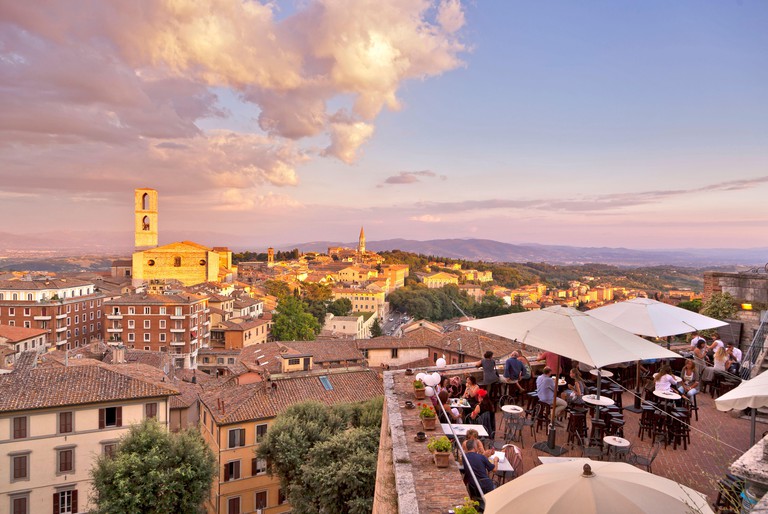 © GGR / REDA &CO srl / Alamy Stock Photo
Dedicated to the Nobel Prize-winning poet Giosuè Carducci, whose poem Il Canto Dell’Amore was inspired by the setting, these tranquil gardens are perfect if you simply want to relax in a peaceful, quiet location. For many locals, however, Giardini Carducci is also known as the best sunset spot in the area, due to its elevated position and sweeping rooftop and mountain views. On a clear day you can even see the hilltop town of Assisi – birthplace of Saint Francis – in the distance.

Not sorted your stay? Book one of the best hotels in Perugia now through Culture Trip. After spending the day exploring the city, relax with a delicious dinner in one of Perugia’s best restaurants. Why not see more of Umbria by taking a trip to some of the villages near the capital? Stay at one of the best hotels in Gubbio or check out the best things to see and do in Assisi. For the more adventurous, there’s the option to venture out of Umbria and take in the must-see sights of not-so-far-away Florence.