The Best Things to Do on the Amalfi Coast, Italy 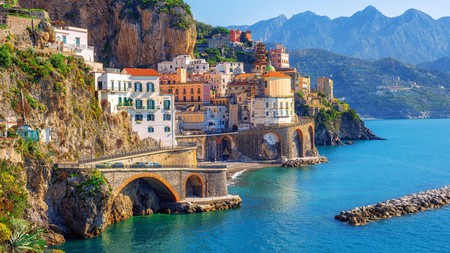 Stretching for 50km (30mi) along the south side of the Sorrentine Peninsula in Italy, the Amalfi Coast is summer romance in a nutshell – all pastel hillside villages and aquamarine shallows, from the dramatic cliffside vistas of Positano to the palatial villas of Ravello. Not to mention some of the best seafood you’ll ever eat.

Once upon a time, the spectacular Amalfi Coast harboured isolated fishing villages and farming communities, tucked away from the eyes of visitors. Then the Amalfi Drive, winding from Sorrento to Amalfi, opened up its limestone cliffs, golden-curved coves, cobbled villages and crystal-clear waters to all – and you can experience it for yourself on Culture Trip’s specially curated 10-day Southern Italy trip, led by our Local Insider.

While the area’s natural beauty is stunning, there’s so much more to do here than explore the craggy shoreline. Positano has pastel-coloured panache and beach glam. Ravello’s lofty villa gardens burst with perfumed flora. Chefs experiment with the flavours of the region’s local lemons and seafood, and there’s captivating history at every turn. 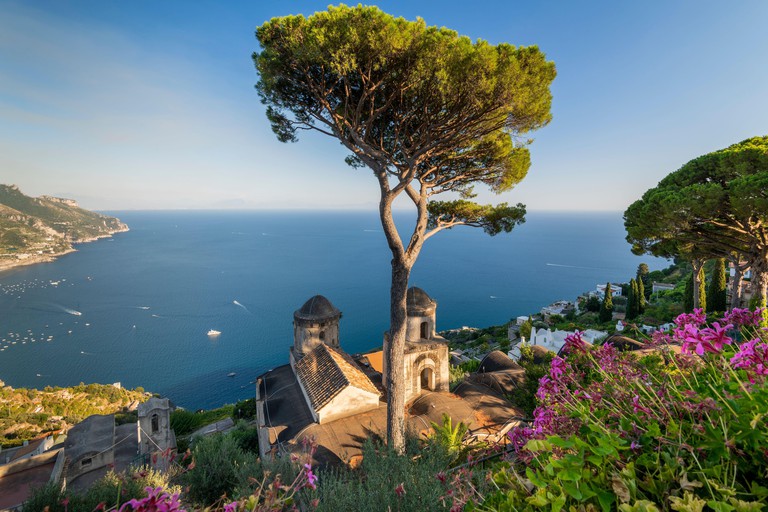 Among the highlights of time spent in the tranquil heights of Ravello is exploring the hilltop town’s oldest villa garden. Villa Rufolo, built by 13th-century merchants of the same name, was revived in the 1800s by Scottish botanist Francis Reid. It’s said that the garden’s ivy-covered tower, and Moorish arcades and cloisters, inspired Wagner’s fictional gardens Klingsor in his famous opera Parsifal. The villa now hosts classical concerts in the summertime. 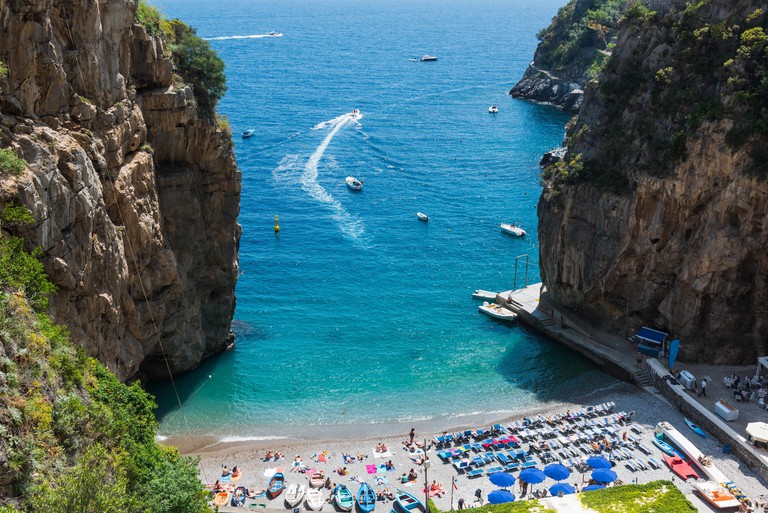 Enclosed and sheltered by plunging cliffs, this small cove has a charming pebbly beach that’s fab for spending a day sunbathing, swimming and sampling local seafood – although it can get very busy during weekends or in high season. Among the shoreline restaurants here is Donna Clelia and the very private beach club La Gavitella, which is accessible only via a steep path – or shuttle boat, if you’re feeling luxurious – from Praiano.

Taste all kinds of lemon products 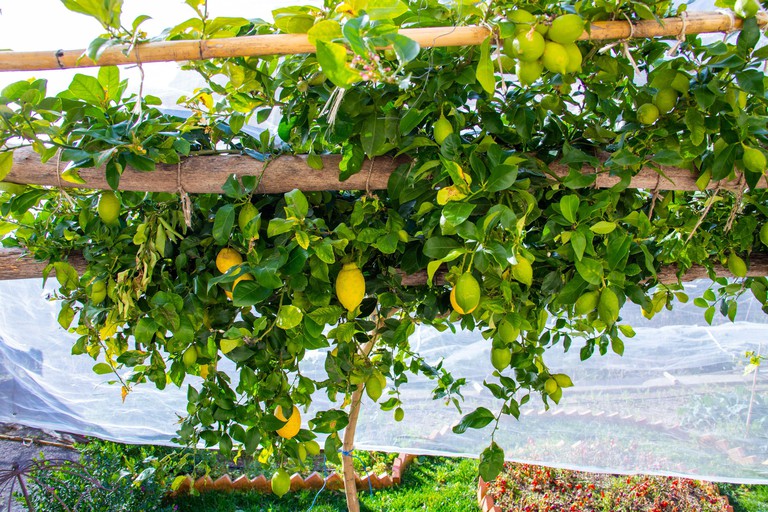 The Amalfi Coast is world-renowned for its twin lemon varieties, the Sfusato Amalfitano and Femminiello Sorrentino, which grow on undulating terraces and small, aromatic gardens all over the region. And they can be enjoyed in many forms, whether squeezed over a fried seafood frittura medley, infused into desserts – if you see a delizia di limone sponge cake on a menu, order it – or packing a punch in the zesty digestivo drink that characterises the region, limoncello. 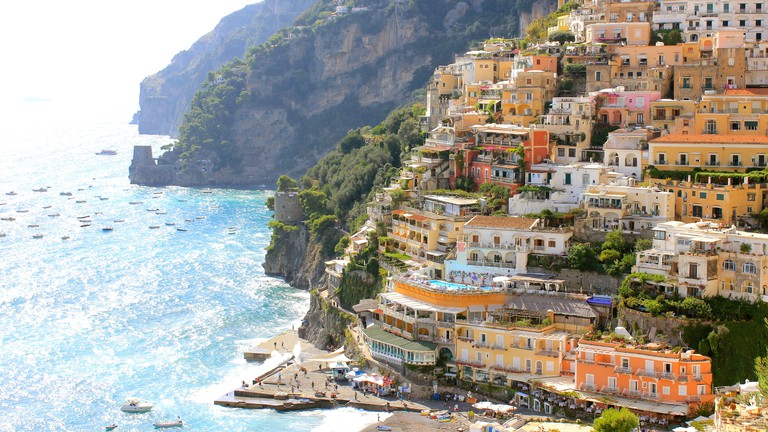 Stacked up on the hillsides overlooking the beaches of Spiaggia Grande and Fornillo, Positano’s pastel-hued houses, villas and sprawling hotels make for an eye-popping spectacle. This colourful town is the Amalfi Coast’s poster child – all flower-clad trattorias, sunbleached terracotta houses and steep, stepped alleyways. Fashion boutiques and chic restaurants give the whole place an upmarket feel, but what’s best about Positano comes for free: its sweet charm, and the astounding views it provides.

Walk with the Gods

High above the chic towns and umbrella-studded beaches of the Amalfi Coast, shepherds and walkers tread the old paths and mule tracks that have linked communities for millennia across the region’s limestone mountains. Most famous of these trails is the Sentiero degli Dei (Path of the Gods). The classic route from Bomerano or Praiano to the village of Nocelle takes in wild Mediterranean hillsides, scrubland and breathtaking coastal views at the Colle Serra pass, which climbs to 580m (1,902ft) above the sea. 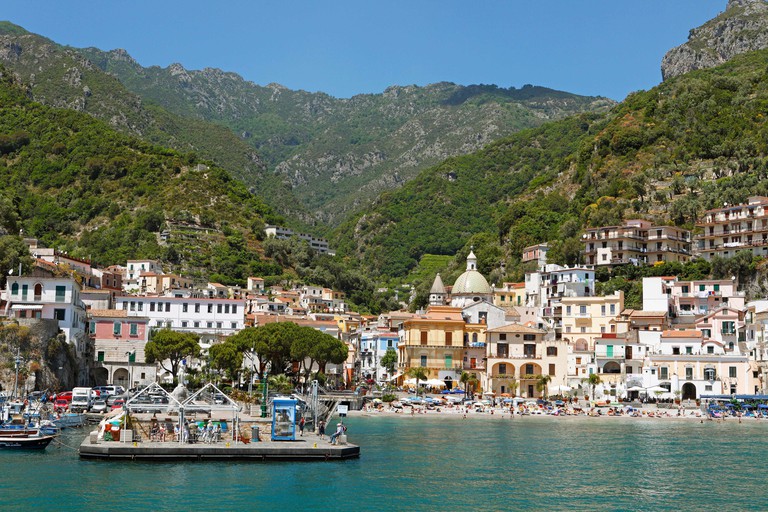 The hillside town of Cetara is less visited by the Instagram crowd than Positano, despite that its colourful cascade of houses, dropping into the sea, are almost as photogenic. Cameras aside, Cetara is worth a visit for its slightly scruffy, fishing-village charm and fabulous seafood. The pebbly beach backdropped by a defensive Saracen tower is not only a great bathing spot, but is also traditionally where locals have cooked up colatura, a very fishy anchovy sauce derived from the ancient Roman garum recipe. Book a table at a seafront restaurant, like Acquapazza or Al Convento, to sample spaghetti alla colatura and other seafood dishes.

Dedicated to the apostle Saint Andrew in the 9th century, this Byzantine cathedral is intertwined with Amalfi’s maritime history. Walk up the grand central staircase from the busy piazza to a columned porch and colossal bronze doors, then linger for photos in the 13th-century Cloister of Paradise, enclosed by interlaced Arabic arches. Inside the oldest, intact part of the complex, the Chapel of the Crucifix leads to a crypt containing the relics of the Catholic apostle Saint Andrew, whose skull was taken from Constantinople by crusaders in 1208.

Take a boat trip into the Emerald Grotto

A 10-minute drive out of Amalfi, in the craggy bay of Conca dei Marini, is the incredible Emerald Grotto – a sea cave that can be accessed by boat. As the name suggests, the water in this natural wonder glows emerald green from the light that filters up through an underground opening, bouncing off stalagmites and stalactites. But don’t expect a jaunt here to be all serenity and cave acoustics. Visitors are herded together on small rowing boats led by boisterous Neapolitan guides. Take in the wondrous, sea-green light refractions and curious geological formations, accompanied by a heavy sprinkling of banter from your guide. 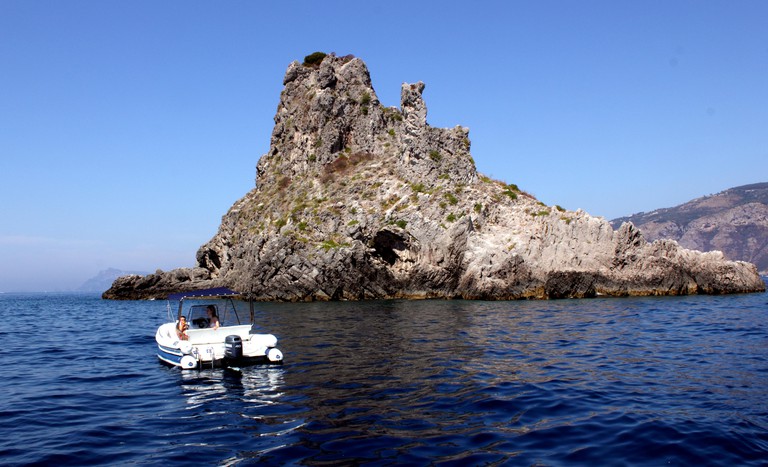 According to Homer’s Odyssey, sirens once lured sailors with their enchanting music onto the three rocky islets of Li Galli, also known as Las Sirenusas, 6km (4mi) out to sea from Positano. Now, the blue-green waters surrounding the islands are more likely to attract yachters, who drop anchor to bathe and snorkel, coming face-to-face with the resident sea life. You can travel to the islands by motorboat from Positano, which takes about 10 minutes and drops you off at the largest island’s tiny port, Isola Lunga. Climb the steep path through thickets of rosemary, cypress and pine, before reaching a viewpoint that looks all the way across to Capri. There are a handful of luxury hotels on the island – but be prepared to seriously splash out to stay in one.

Hike through Amalfi’s Valley of the Mills

Museum
Facebook
Email
Twitter
Pinterest
Copy link
Share
Escape Amalfi’s day-tripping hordes with a ramble inland to the cooler Valle dei Mulini (Valley of the Mills). Follow the Via delle Cartiere and within a mile of the seafront you’ll reach the Museo della Carta, which documents Amalfi’s development of papermaking by Amalfitani merchants who imported techniques from China in the Middle Ages. Continue walking up the lush gorge and you can leave the road behind, instead taking a path that weaves between abandoned and converted mills, waterfalls and the cool Canneto River, which once powered the mills.

There are plenty of other things to do here, from hiking the Amalfi Coast’s Path of the Gods to sipping intricate cocktails at some of the the best bars around and eating delicious local fare at these must-visit restaurants.

If you’re still craving an Italian adventure, but not sure about the Amalfi Coast, make sure you check out one of our other trips to Italy in the coming months.