The Best Things to Do in Cefalù, Sicily 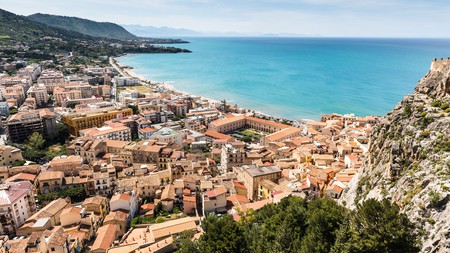 With a gorgeous coastline and pretty old town, there are many things to do in Cefalù | Photo by Jacek Dylag on Unsplash

A stay in Cefalù, Sicily, calls for slow days pottering in the old town, sunbathing on the beach and digging into seafood pasta. And when it’s time to explore, here are the best things to do.

On the northern shoreline of Sicily, just an hour’s drive from capital Palermo, Cefalù is a picture-perfect summer getaway spot. While some are tempted to pop by just for a day trip, that would be to miss out on what a longer stay here can offer: languid beach days, getting lost in cobbled alleyways and seafood specialities galore. Not to mention the extensive history, Norman architecture and beachside cliffs that characterise this pretty town. 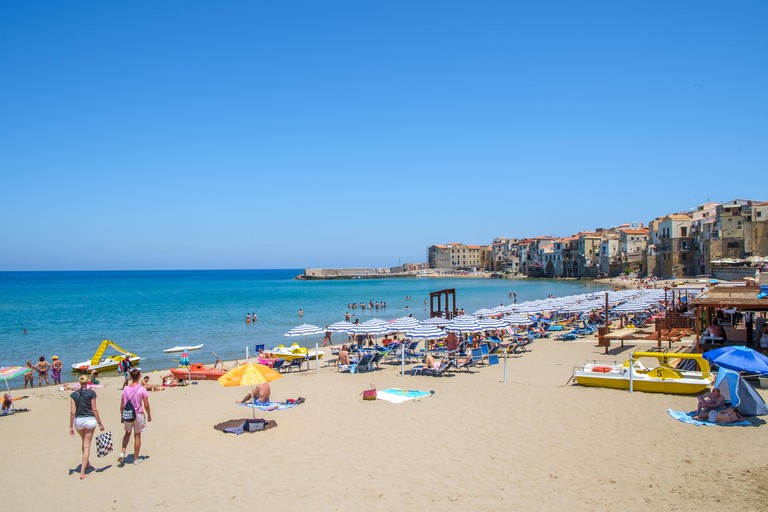 Cefalù beach is often considered one of the most beautiful beaches in Sicily and the whole of Italy. To a backdrop of jagged cliffs, and with hazy views of the whitewashed old town, it’s got even more going for it than its half-mile-long stretch of soft sand and clear, warm shallows. Don’t expect to find a secluded spot, though, especially if you visit during August when most Italians holiday. This beach is too glorious to have been kept a secret.

Cathedral, Church
Facebook
Email
Twitter
Pinterest
Copy link
Share
Constructed between 1131 and 1240 in Arab-Norman style after the Norman invasion of Sicily, this Unesco World Heritage Site dominates Cefalù’s otherwise uniform skyline. It’s one of nine regional palaces, churches and cathedrals known as the Arab-Norman Palermo and the Cathedral Churches of Cefalù and Monreale. Legend has it that King Roger II of Sicily built the cathedral to thank God after surviving a storm at sea and washing up on the shores of Cefalù. Today, most visitors go to admire the beautifully preserved Byzantine mosaics, particularly in the central apse. 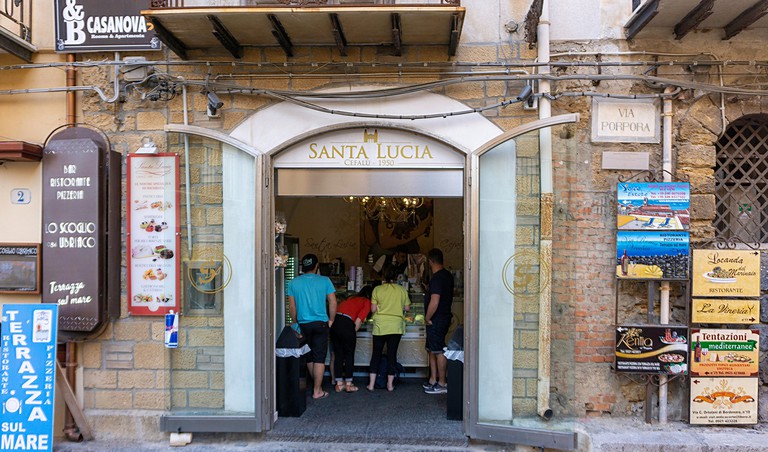 © noel bennett / Alamy
Looking for a way to cool down after a day in the Sicilian sun? Do as the locals do and stop by one of the gelaterias in the old town for an icy gelato. Santa Lucia is continually ranked as the top gelato spot in town, with creamy hazelnut, pistachio and chunky dark chocolate on the menu. Or for something very Sicilian, order brioche con gelato: ice cream in a brioche bun. Some even eat it for breakfast.

Italian food is loved the world over, but Sicily has culinary traditions that you might not have encountered before. The many family-run restaurants dotted around Cefalu’s old town are perfect for a Sicilian food odyssey. Il Normanno continues regional culinary traditions, serving local favourites such as pasta con le sarde – pasta with sardines and anchovies – while La Galleria updates and reinterprets traditional fare in a hipster setting (branch out with a bowl of prawn, pistachio and green apple spaghetti). For a quick bite, stop by La Gallizza for Sicilian street food classics such as arancini and sfincione (thick Sicilian pizza). 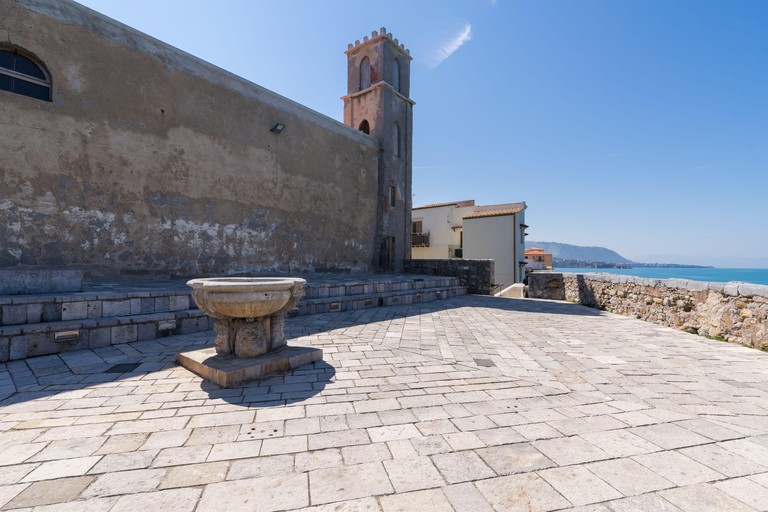 Make your way up to this 17th-century fortification for stunning views out over the sea. Off Via Bordonaro, this is a popular place to sunbathe during the day or catch the sunset in the evening. A few swimming holes nearby are never busy – good spots for a dip if the beach crowds are a bit much.

Trade your sandals for trainers for the 45-minute climb up to La Rocca, a 280m (919ft) rocky crag once the site of an Arab citadel; it towers over Cefalù rewarding hikers with sensational views of the town and sea below. There’s a small entry fee to explore the ruins at the top, and if you’re visiting in the summer, consider hiking in the morning or afternoon when it’s slightly cooler.

There’s hardly a better vantage point for admiring Cefalù’s old town than from the bow of a boat. And some parts of the coast are only accessible this way, such as Santa Lucia Grotto. So choose a boat tour that lets you hop into the water to snorkel or offers a floating happy hour during a tour of the coastline. Or become a fisherman for the day on a scheduled excursion, combing the waters for the best catch. 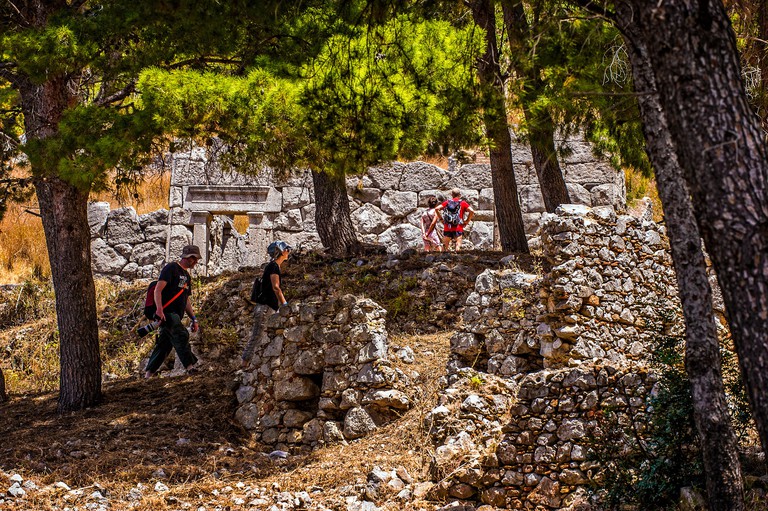 © Realy Easy Star / Toni Spagone / Alamy Stock Photo
On your way up to La Rocca, bring sfincione, prosciutto ham and local sheep’s cheese for a picnic at the Tempio di Diana. The monolithic temple, built into the rocky hillside 150m (492ft) above the sea, was constructed in the fourth or fifth century BCE. Some historians consider it to be the oldest structure in Sicily. With breathtaking views and seclusion from the busy town below, the temple grounds provide a romantic setting for a picnic for two. 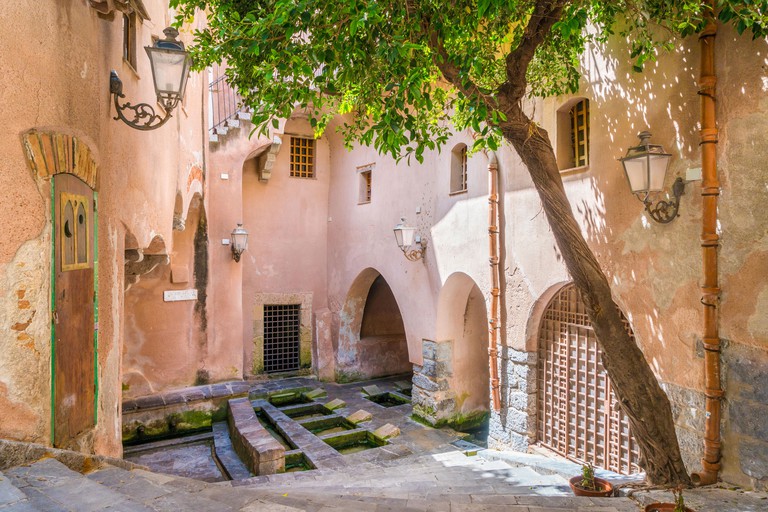 © Stefano Valeri / Alamy
Walk down Via Vittorio Emmanuele and take a wide staircase a few metres below street level for a glimpse of the rectangular stone pools of Lavatoio Cefalù – a public wash house built into the river during medieval times and used until the 20th century. Over the River Cefalino, the wash house is an intriguing insight into how Sicilians once bathed and cleaned their clothes. 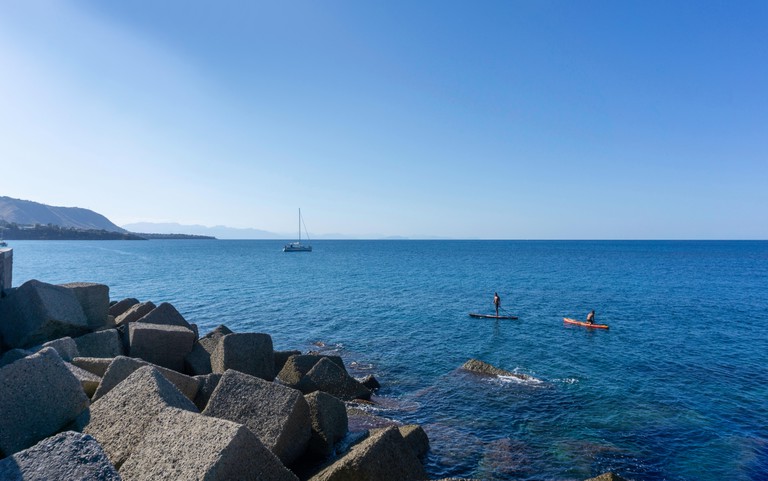 Break up your beach days and get into the water on a stand-up paddleboard (SUP). Learn how with a lesson from a local company such as Piranha SUP Surf School – it’s surprisingly hard to stand up – then go on a longer excursion to a nearby grotto or wind down with a SUP yoga class. It’s a fun way to work your abs and top up your tan without noticing.

Not found your place to stay in Sicily? Book one of the best hotels on the island through Culture Trip. Once you’re done, discover the top things to see and do or, for the more adventurous, try one of the island’s hiking trails. At the end of the day, wind down and treat yourself to a delicious dinner at one of the best restaurants in Cefalù.