The Best Things to Do in Cagliari, Sardinia 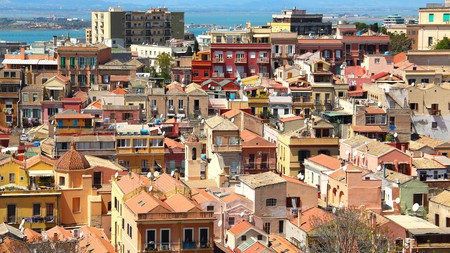 Ancient history collides with modern Italian sensibilities in Cagliari, the capital of Sardinia. Pristine beaches, lively cafe culture and sun-baked streets lined with Vespas are all presided over by the Castello citadel – and all ready to be explored with Culture Trip.

Sardinia’s capital boasts more than its fair share of ancient Roman ruins, archaeological artefacts and gold-shuttered palaces. But despite its rich cultural ties with the past, Cagliari has a modern, cosmopolitan streak running through its Vespa-packed veins. There’s a welcoming Mediterranean atmosphere to the city, particularly present in its many buzzy restaurants, bars and cafes slotted onto terraces beneath shady arcades – not to mention its white-sand beaches. Towering above it all is the historic citadel, Il Castello, a complex of domes, palaces and towers peeking out from the ramparts. 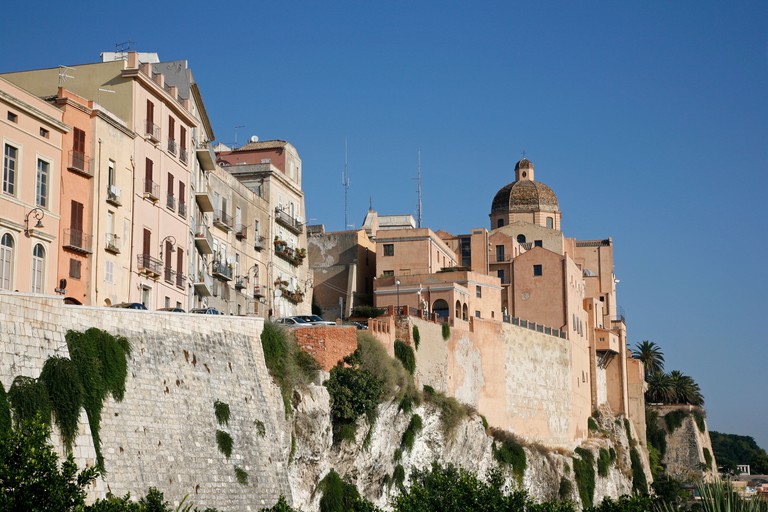 © Yadid Levy / Alamy Stock Photo
Enjoying a prime position on the handsome Piazza Palazzo, the elegant Cathedral of Santa Maria looks impressive enough from the outside, with its marble Pisan-Romanesque facade. But make your way inside and you’ll find that the mix of frescoes, sculpture, marble, intricate carvings and other painstaking details is even more breathtaking. Descend into the crypt to find the ominously named Santuario dei Martiri (Sanctuary of Martyrs), packed full with more artwork. 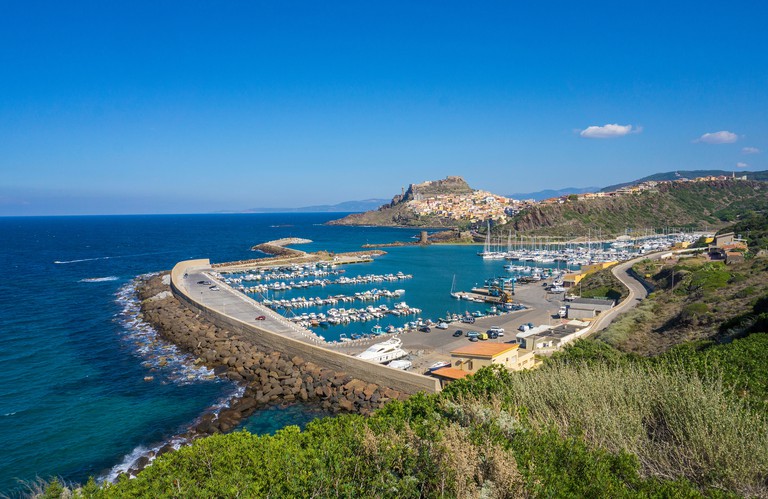 © Helmut Corneli / Alamy Stock Photo
The popular Castello district is perhaps Cagliari’s defining feature, with its warren of high-walled streets crammed with formerly aristocratic palaces, museums, boutiques and bars – plus the stunning cathedral. Those who enjoy delving into the past can meander between the medieval structures and Palazzo Regio – an elaborately decorated former royal residence – but there’s just as much pleasure to be had by exploring the many cosy cafes crammed into nooks around each alleyway, some utilising Castello’s hilltop position to supply superb views.

Imagine gladiator fights at the Roman Amphitheatre of Cagliari

Ready your best Russell Crowe impression as you head into this surprisingly well-preserved amphitheatre. As you might have guessed, it was the setting for countless battles, some between gladiators, others between men and wild animals – not to mention the public executions. It’s grizzly stuff, which makes it all the more fascinating to gaze upon the ancient site and imagine. More Roman artefacts can be seen at the Museo Archeologico Nazionale, a five-minute stroll from the amphitheatre, where you can take a vivid walk through Sardinian history. 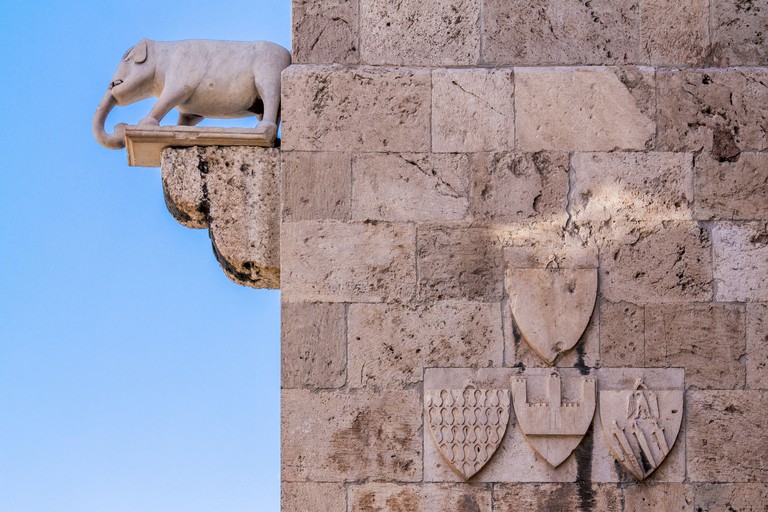 © Moreno Geremetta / mauritius images GmbH / Alamy Stock Photo
Since being constructed in the early 14th century, this limestone tower has acted as a defensive stronghold, a prison, an armoury and a residence for wealthy families. It’s become one of the city’s best-known buildings – and with such sweeping views across Cagliari, it’s not hard to see why. Look out for the small elephant statue which the tower is named after, sitting innocuously on the southern wall.

Marvel at the view from Bastione di Saint Remy

This city landmark is hard to miss, which is handy because you haven’t really experienced Cagliari until you’ve ascended the several sets of stairs that lead neatly up to the Umberto I terrace. Here, you’ll find blissful views across the Med, which shimmers rose-gold if you’re lucky enough to catch the sunset. Before – or after – kicking back on the terrace, take a stroll around the rest of the bastion, appreciating the various galleries, columns and other architectural feats. 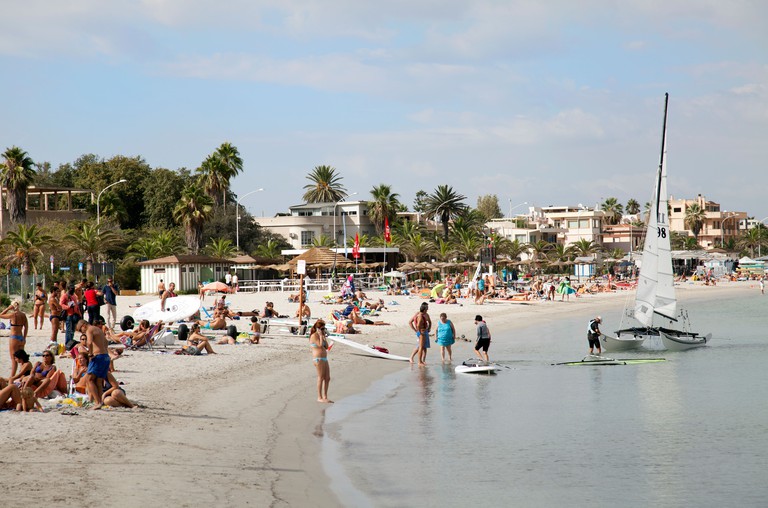 © M.Sobreira / Alamy Stock Photo
Stretching out over a mighty 5mi (8km) arc, this sprawling, energetic beach is loved by both locals and tourists. It’s an undeniably gorgeous location, with a bit of everything you need for a fun-filled beach day: watersports and kitesurfing, tons of lively beach bars and restaurants, craggy coastal scenery and golden sand melting into crystal-clear waters. All of this means that it’s a popular place and can get busy, so if you’re after something quieter, keep heading south from the bottom of Poetto to reach Calamosca – a smaller, rugged but equally beautiful beach, tucked into a cove.

Check out the boats at Marina Piccola

Give your skin a break from sunbathing on Poetto and wander to the southern tip of the beach to Marina Piccola. This quaint little marina is set at the foot of Sella del Diavolo (the Devil’s Saddle), a dramatic rocky outcrop. It’s a lovely spot in which to spend an hour or two gazing out at the boats, from simple fishing vessels to super-slick rides built for boat parties. A few restaurants and bars overlooking the marina invite longer lingering over a glass of wine, as you fantasise about the yacht of your dreams.

Shop like the locals do at Mercato di San Benedetto, a bustling indoor marketplace that dates back to 1957. Covering 8,000sqm over two levels and with several hundred traders, all loudly advertising their wares, it’s one of the largest and busiest covered markets in Italy. You’ll find almost any type of fresh produce imaginable – heavy bunches of violet-coloured grapes, pecorino cheese, salami – but even if you won’t be buying, it’s a valuable glimpse into a particularly lively slice of local life.

Walk through the botanical gardens 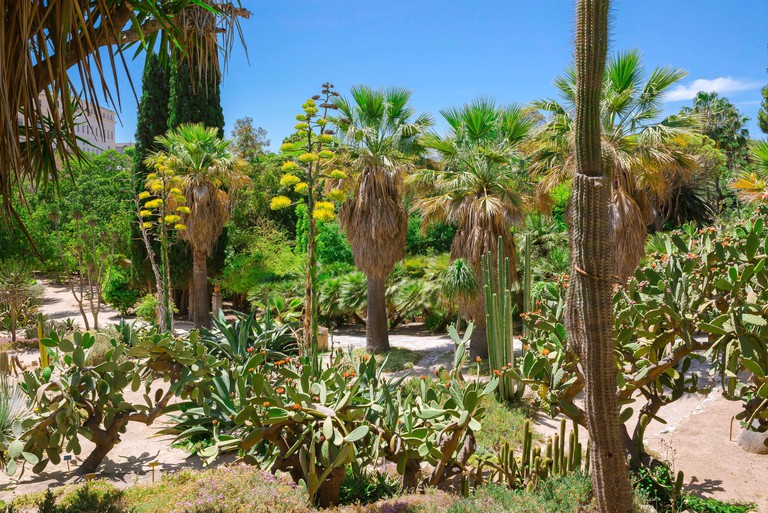 © Michael Brooks / Alamy Stock Photo
Take a quick trip from Sardinia to the tropics, and get lost in the University of Cagliari’s Orto Botanico. Dating back to 1864, the gardens now feature over 2,000 species, including a big selection of tropical plants alongside Mediterranean and succulent flora. Add in some water features, trails, benches and views and you’ve got a real oasis of calm – so block out an afternoon and find your zen.

You don’t have to ramble miles outside of the city to find a decent walk, as there are great hiking opportunities to be had in Parco di Monte Urpinu, which borders the southeast corner of Cagliari’s city centre. Inside this huge hilltop park, covering around 30ha (74 acres), you’ll find ample hiking routes on which to wear out your walking boots, plus all kinds of wildlife to spot. Look out for swans, terrapins, peacocks and even flamingos, which can sometimes be spotted over in their own city park – Parco Naturale Molentargius Saline – by looking southeast from way up on Monte Urpinu’s higher viewpoints.