The Beauty Of Faith: 10 Iconic Churches In Northern Italy 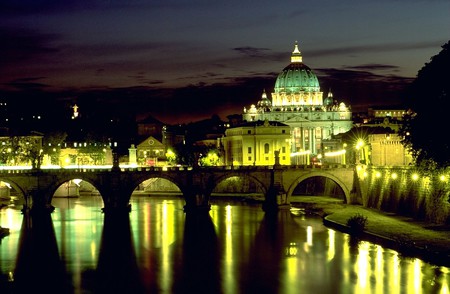 Italy holds some of the most stunning churches in the world that are seeped in history and have been designed and decorated by the most famous artists of all time. Discover the most inspiring religious monuments to be found in this beautiful nation, as Aalia Ahmed provides a guide to ten iconic churches in Northern Italy. 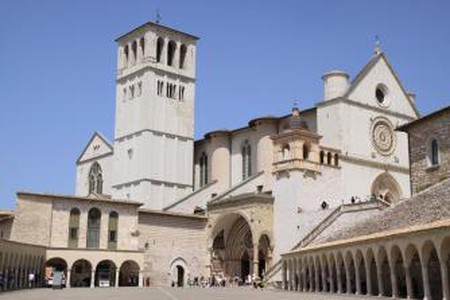 Towering over the Umbrian valley, this cathedral devoted to St. Francis is one of the most spectacular sights in Italy. As the mother church of the Franciscan order in Italy, the Basilica di San Francesco is an important place of Christian pilgrimage and is distinctive for its unusual location in the side of a hill. The construction of the basilica was begun in 1228 when St. Francis laid the foundation stone of the church, following his canonisation by Pope Gregory IX. The Upper Basilica – which was damaged in the earthquake of 1997 but then restored – houses the exuberant cycle of frescoes of St. Francis by Giotto, as well as the infamous Crucifixion by Cimabue. The Lower Basilica contains works by Giorgetti and Simone Martini. The tomb of St. Francis can be found in the crypt below the Lower Basilica. 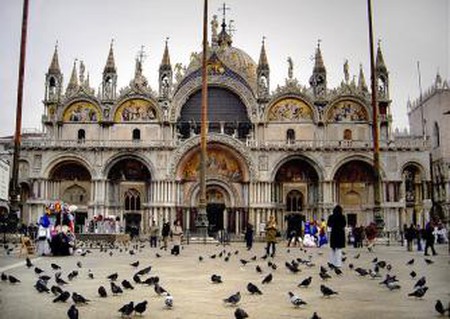 A church opulent in design and rich in guilded Byzantine mosaics, the Basilica di San Marco has come to be known by the nickname ‘Chiesa d’Oro’ (the Church of Gold). Built in a manner that resembles the Gothic and Byzantine architecture of the Doge’s Palace, the basilica is steeped in political history. The upper order of the church’s interior is blanketed in vibrant mosaics made up of gold, bronze and various precious stones. The cartoons for the mosaics were prepared by some of the greatest painters of the time such as Titian, Paolo Uccello, Jacopo Tintoretto, Paolo Veronese and Andrea del Castagno. 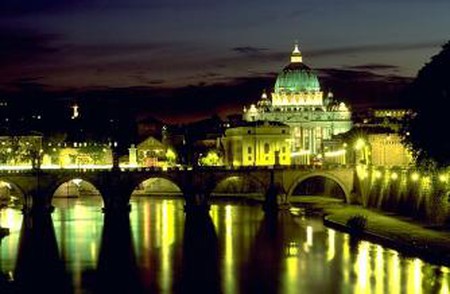 The iconic dome of San Pietro is one that dominates the skyline of Rome. Designed under the combined efforts of Michelangelo, Donato Bramante, Carlo Maderno and Gian Lorenzo Bernini, the church remains one of the most renowned pieces of Renaissance architecture. The basilica is the burial site of St. Peter and holds numerous tombs belonging to past popes as well as other notable figures in history. It also includes the sublime Pietà by Michelangelo and Bernini’s Cathedra Petri (Throne of St. Peter). The towers, narthex and naves are dominated by sculptures and Renaissance treasures including Arnolfo di Cambio’s bronze statue of St. Peter and Bernini’s Verità. 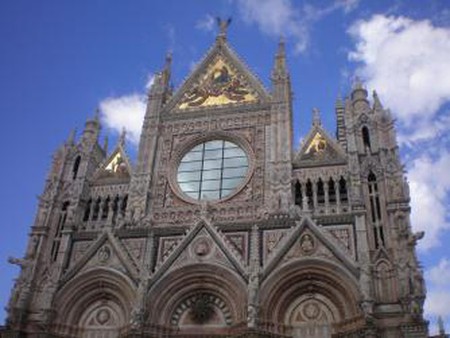 The façade of the cathedral is one of the most impressive features in Siena and, perhaps, in all of Italy. Composed of alternating black and white stripes along the side of the building and on the bell-tower, the cathedral is an outstanding construction that comprises of styles ranging from French Gothic, Tuscan Romanesque and Classical architecture. The interior of the cathedral is an elaborate composition of guilded capitals, ornate columns and decorative allegorical busts. Most impressive is Nicola Pisano’s tremendous pulpit made of Carrara marble between 1265 and 1268. 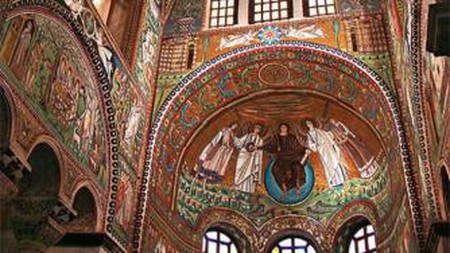 Upon first glance the exterior of the Basilica di San Vitale manifests to be one of marvel; unlike most of the churches in Italy this one appears to be humble and modest in its demeanour. It presents itself as an unpretentious, reticent structure befitting its simple and plain purpose of accommodating the pious. It is within this bare and unadorned structure that lies one of the most sublime examples of mosaic art. Here, the stories of Abraham, Isaac, Moses, Jeremiah, and Abel and Cain are intricately depicted in bright turquoise, deep blue and guilded gold. The presbytery is a thing of grandeur with its vivacious display of fruits and flowers, animals and angels. 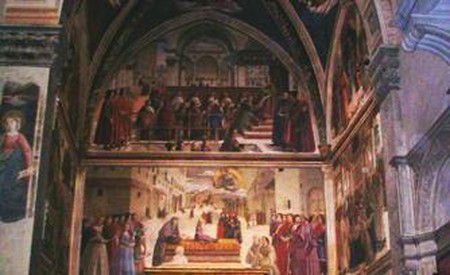 The church of Santa Trinità is one that is easy to miss as its façade modestly blends in with the buildings between which it is sandwiched. However, this church is in fact the mother church of the Vallumbrosan Order of monks and was founded in 1092. Upon entering the church one becomes overwhelmed with the numerous chapels installed within – there are 20 chapels in total – and the sight of the colourful, illuminated stone of the church from the stained glass windows is beauteous. The infamous Sassetti Chapel is nestled on the far right with its multiple murals painted by the great Domenico Ghirlandaio. 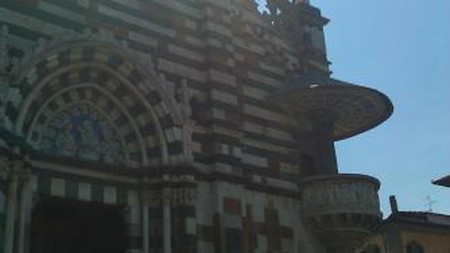 This cathedral is one of great importance as it is one of the oldest churches in Italy. It also holds great religious value as it is dedicated to St. Stephen, the first known Christian martyr. Like the Duomo di Siena, this church has a façade that is made up of alternating horizontal lines of deep green and white marble. What is unique about this structure is that there is an external pulpit protruding from the side of the building, built by Michelozzo and decorated by Donatello. The lunette over the entrance door holds a glazed terracotta sculpture depicting the Madonna with Saints Stephen and John, by Andrea della Robbia. The interior is simple but adorned with frescoes by the likes of Paulo Uccello, Filippo Lippi and Agnolo Gaddi, to name a few. 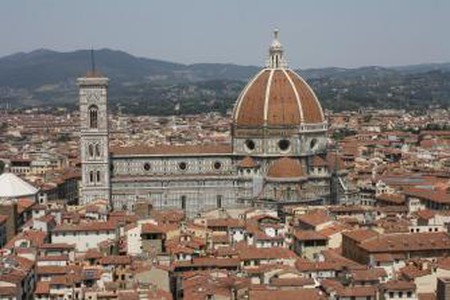 The grand, oblong mass that is the Basilica di Santa Maria del Fiore dominates the Florentine skyline. Its most noticeable trait is the colossal dome engineered by Filippo Brunelleschi. The design of the basilica was carried out by Arnolfo di Cambio, however after his death, Giotto – assisted by Andrea Pisano – continued di Cambio’s design. Out of this came Giotto’s magnificent campanile. The façade of the building underwent numerous revisions and is attributed to the efforts of Arnolfo di Cambio, Andrea Orcagna and Taddeo Gaddi. The interior of the dome is painted with a representation of The Last Judgement which was begun by Giorgio Vasari in 1568. 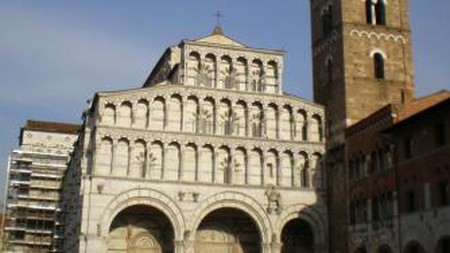 The Church of San Martino is not as elaborately decorated as the other churches listed above. However, where it lacks in flamboyance it makes up for in its innovative structure. The façade of the church consists of three rows of open galleries stacked upon one another. The entire building is adorned with beautiful sculptures and decorated columns. To the right of the basilica stands the looming campanile. The interior of the cathedral houses paintings by Jacopo Tintoretto, Fra Bartolomeo, Federico Zuccari and Domenico Ghirlandaio. 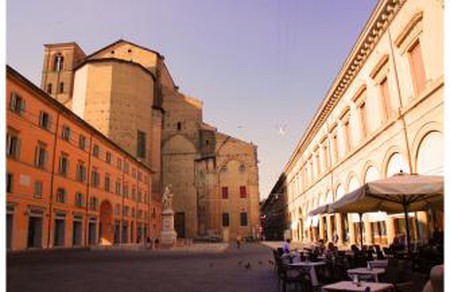 This church boasts of being the 15th largest church in the world and is a dominating feature in Bologna. It is dedicated to St. Petronius, the patron saint of the city, and now houses his relics. What stands out when looking at this building is the unfinished façade, despite the fact that notable architects such as Baldassarre Peruzzi, Andrea Palladio, Vignola and Alberto Alberti were called upon to propose a solution for its completion. The interior includes 22 chapels containing a wonderful polyptych by Tomas Garelli and a San Rocco by Parmigianino.