The Best-Kept Secrets of Florence 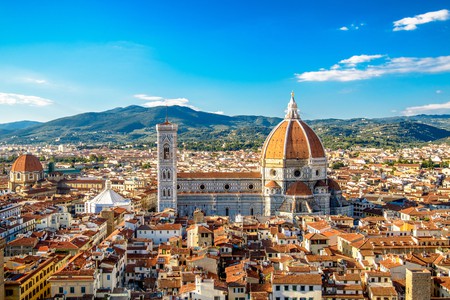 Florence is known as the city with the orange dome created by Brunelleschi, the river with Ponte Vecchio, and the home of Dante Alighieri. Behind these famous sites and the prevalent Renaissance architecture, however, is a completely different layer of Florence; hidden corridors, ancient churches, pop art and rose gardens to name a few of the finds. Check out our list of the nine best-kept secrets of Florence.

The Vasari Corridor, designed by Giorgio Vasari for the Medici family in the 16th century, runs along one side of Ponte Vecchio across the Arno River. Today few people know of its existence, even though its history is rather intricate. It was the Medici family that decided to build a covered corridor between the Uffizi gallery of art, where Cosimo de’ Medici worked, and Palazzo Pitti, where he lived. The corridor is 1.2-km long and extends to the public space of the city, which at the time of its use was controversial. Nowadays, it is home to an impressive collection of self-portraits by famous artists such as Rembrandt, Rubens, Velázquez, and many others. In order to reach it, you have to go through the Uffizi gallery.

Museum of Anthropology and Ethnology

This museum houses one of the most impressive, old-fashioned anthropological and ethnological collections in Europe. It is a part of the Natural Science Museum of the University of Florence and is located in a beautiful, 16th-century building designed by Bernardo Buontalenti. The 18 rooms of the museum display fascinating evidence of human diversity in terms of cultural and religious practices, tools, clothing, artwork, musical instruments, and language. Some of the rooms host artifacts from minorities and cultures which you have probably never even heard of. Moreover, a separate space on the ground-floor is dedicated to a large collection on the diverse cultures of India, amassed during the multiple travels of a former director of the museum, the anthropologist Angelo De Gubernatis. 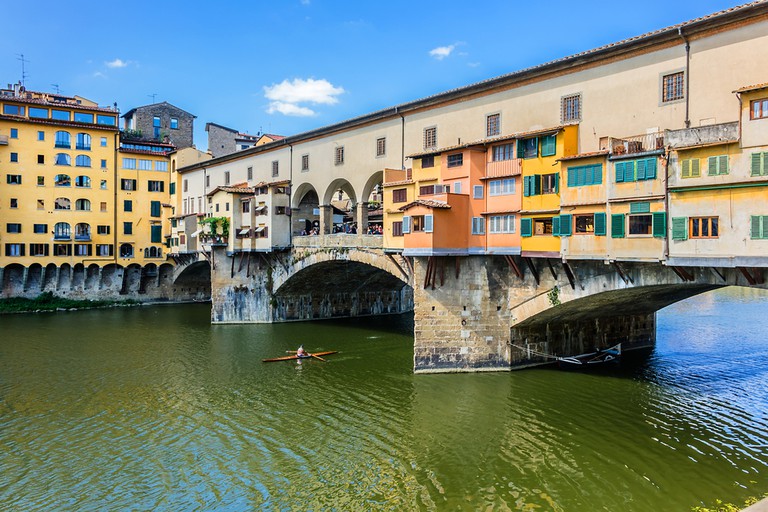 The ancient church of Santa Reparata under the Cathedral

As late as during the 1960s and 1970s, the excavations conducted under the Florentine iconic Brunelleschi’s Cathedral Santa Maria del Fiore revealed the ruins of an original ancient church Santa Reparata, dating back to the times when Florence was a Roman colony. This (very well hidden) site shows you Florence before its dominant Renaissance era. The church’s patron, a young martyr from the 3rd century A.D., remains one of Florence’s patron saints to this day. 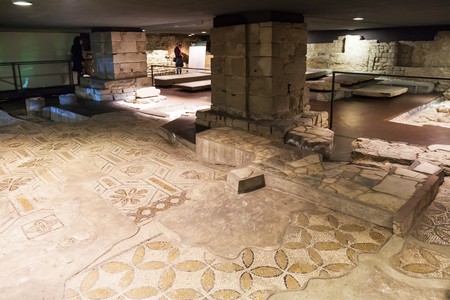 The French artist Clet Abraham decided to ‘enhance’ the traffic signs of Florence by modifying them in a beautiful and witty way. Clet Abraham moved to Italy over 20 years ago and did the same to the Florentine traffic signs as to the signs in various other European cities, such as Paris and Berlin. Even though some may perceive his pop art as vandalism, the material he uses is easily removable, so no real damage to the city’s transport or signposts has been done. You can also admire his art in his studio at Via Dell’Olmo 8r. 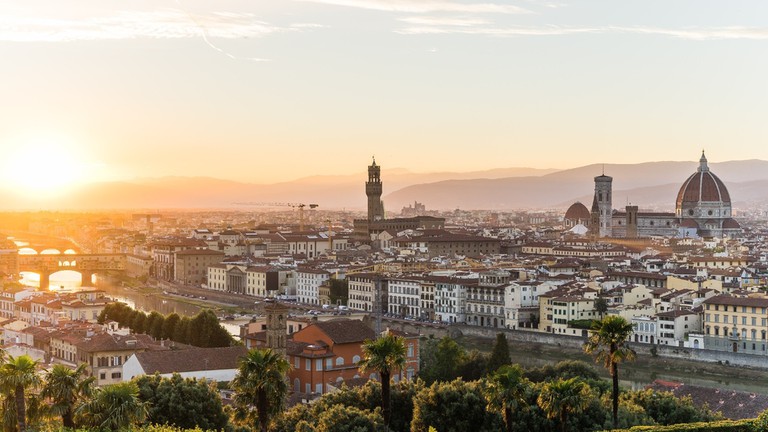 View over Florence from Piazzale Michelangelo | © Shanti Hesse/Shutterstock
Piazzale Michelangelo was not designed by Michelangelo himself, but by 19th century artist Giuseppe Poggi. It displays, however, a large number of copies of Michelangelo’s most acknowledged sculptures, such as David – hence the name of the place. In addition, there is a charming collection of love locks, probably inspired by the wonderful view of Florence and the Arno River that the piazzale offers.
Open In Google Maps
Piazzale Michelangelo, Firenze, Toscana, 50125, Italy
Give us feedback

If you need a quick change from culture to nature, pause during the walk to Piazzale Michelangelo and stop by the wonderful rose garden that offers an amazing view of the city. The garden was created by the same artist, Giuseppe Poggi, at the end of the 19th century. As a result of Florence’s twinning with Kyoto, the garden gained an additional part – a Japanese Shorai oasis. The garden is also decorated with 12 sculptures by contemporary Belgian artist Jean-Michel Folon. 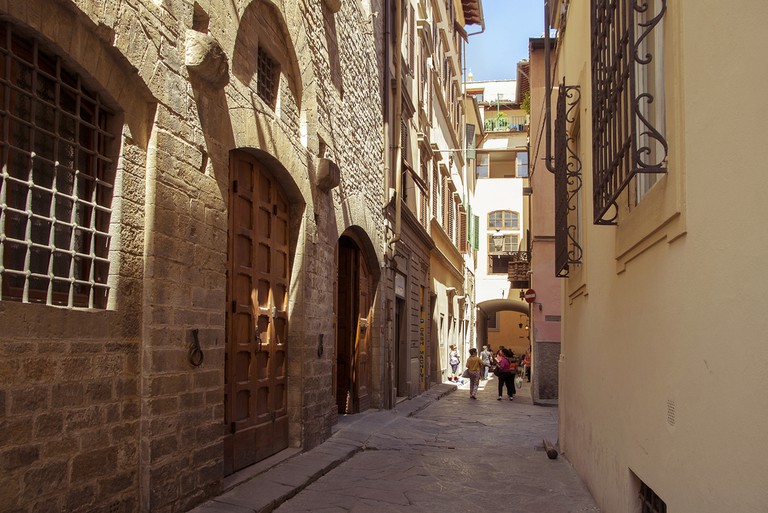 For fans of Italian literature and especially the great Dante Alighieri, this church will be the most interesting site in the whole of Florence (alongside Dante’s house, of course). Tiny and hidden between huge buildings, the Church of Santa Margherita de’ Cerchi dates back to the 11th century. It is here that Dante met his true love Beatrice. Although Beatrice’s family and nanny are buried in the church, she was probably buried somewhere else with her husband’s relatives. The Santa Margherita de’ Cerchi church is where one of the greatest love stories described in literature began.

Open In Google Maps
Via Santa Margherita, Firenze, Toscana, 50122, Italy
Give us feedback

Antiques at the flea market on Piazza dei Ciompi 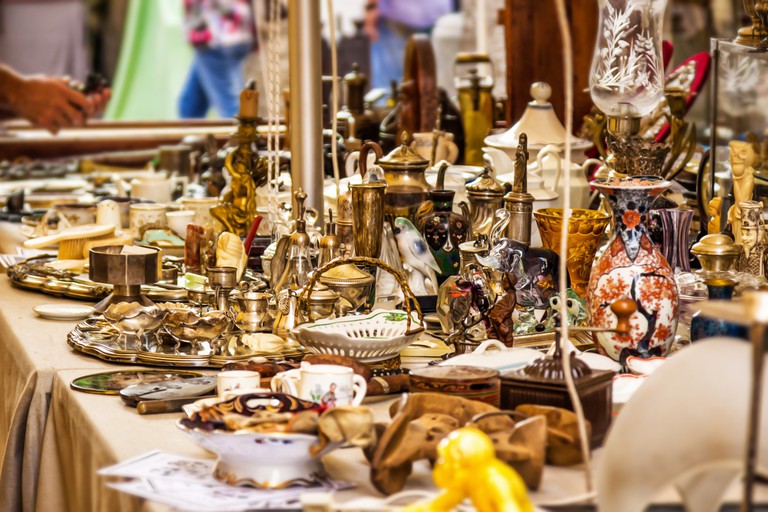 Summer market of old vintage objects | © iryna1/Shutterstock
On the last weekend of each month, Piazza dei Ciompi, located in the Sant’ Ambrogio quarter of Florence, hosts a wonderful antiques market, full of vintage accessories, old-fashioned furniture and objects of every-day use, and second-hand clothing. On these weekends the market expands to over 100 stands, but a smaller version is open every day.
Open In Google Maps
Florence, Italy
Give us feedback

Loggia del Bigallo stands just next to the cathedral Santa Maria del Fiore, and therefore many tourists pass by it every day – but not many stop to admire it or to wonder what it was used for. This Gothic building from the 14th century was the venue for the Compagnia della Misericordia and served as a shelter for abandoned children and people whose houses were destroyed by the plague. Nowadays, the loggia has quite a different purpose – it hosts a collection of frescos, such as ‘Madonna of the Misericordia’ by Bernardo Daddi. 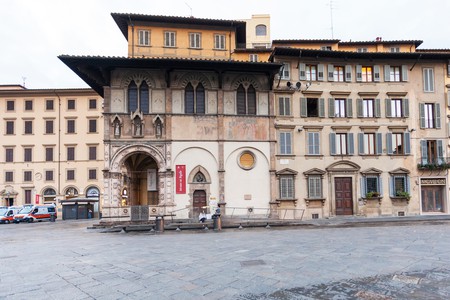 Museum of Bigallo in Loggia del Bigallo on Piazza San Giovanni in morning. The Loggia of Bigallo was built in 1352-1358 for Compagnia della Misericordia | © vvoe/Shutterstock
Give us feedback