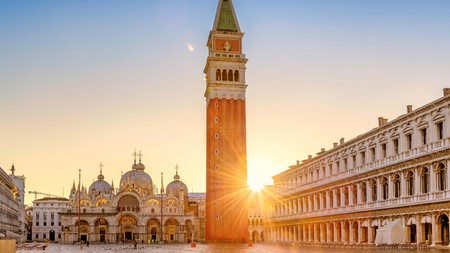 Breakfast in Venice, as in most parts of Italy, is a quick affair, normally consumed in a matter of minutes. It’s practically the opposite of the full English or the American-style bacon-and-pancake brunch – a coffee and a pastry are the basis of the Venetian breakfast, and most residents of the city consume them at the same bar that they faithfully visit every morning.

To get an idea of the crème de la crème of breakfast venues in Venice, Culture Trip stopped by one of the most prominent and celebrated cafés in the city, Grancaffè Quadri, and spoke to executive chef Silvio Giavedoni on how to blend in with the Venetians at breakfast time, and where to sample the best produce. 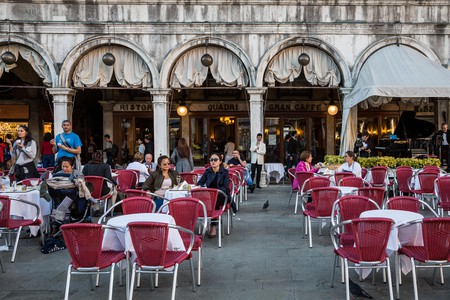 This historic bar is located in St Mark’s Square, the most visited and iconic part of Venice and which was allegedly dubbed “the drawing room of Europe” by Napoleon. It wears its grand location admirably, with an interior that is only a little less opulently gilded than the ancient St Mark’s Basilica a few metres away. Giavedoni is the executive chef of Grancaffè & Ristorante Quadri, and responsible for earning the establishment a Michelin star less than six months after he arrived. He performs the same role at AMO, the café and restaurant located inside department store T Fondaco dei Tedeschi at the base of the Rialto Bridge; both AMO and Grancaffè Quadri have recently been named two of the best bars in Italy (and the only two from Venice to make the list).

Giavedoni’s idea of a typical Venetian breakfast is as simple as the meal itself; “An espresso and a croissant!”. No fuss, nothing elaborate, and neither is the method of consuming it, which Giavedoni describes succinctly as “standing up at their favorite coffee shop”. Standing up may not be obligatory, but it is, as Giavedoni suggests, the Venetian way; many bars and pasticcerie don’t even offer seating.

As for breakfast faux pas, Giavedoni issues one warning of what not to do: “Change your mind after ordering! Just kidding. I would say drink your coffee at the counter or at a table, but don’t ask for it to go.” Venice is one place where environmentalist pleas to stop using takeaway cups have been rendered unnecessary. While you may find some American-style bars offering the service, takeaway coffee is usually simply not an option in Venetian bars. 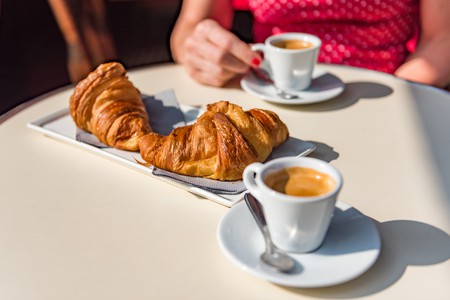 When it comes to venue recommendations, Grancaffè Quadri is naturally at the top of Giavedoni’s list. Ironically, this is one of the few bars in the city where you wouldn’t just want to gulp your coffee and go. As Giavedoni rightly points out, “it has one of the most amazing views in the world”. Savour that morning espresso as you take in the mosaics of the Basilica, the iconic bell tower, and the sweep of arcades opposite.

In addition to being a feast for the eyes, Giavedoni says, “Over the past 10 years, under the management of the Alajmo brothers, the quality of the food and beverages has been constantly improving”. They serve Giavedoni’s favourite coffee, “selected and roasted by Laboratorio Giamaica Caffè, based in Verona”. Along with your espresso, Giavedoni recommends “an extra-virgin olive oil brioche with apricot jam inside for breakfast”. And there’s no need to stop there. For a mouthwatering midday snack, he suggests a Nonno Vittorio tramezzino, or tea sandwich, made with baccalà mantecato (creamed salt cod), lettuce, tropea onions marinated in balsamic vinegar, tomato and oregano mayo, paired with a glass of prosecco.”

Second on the list is sister bar and restaurant AMO in the T Fondaco dei Tedeschi. Styled in sleek, modern luxury, this bar is the result of a collaboration with Philippe Starck. Giavedoni says, “I love the coffee variety we serve, and the selection of petit fours”. Like Grancaffè Quadri, AMO serves Laboratorio Giamaica Caffè, and the accompanying selection of petit fours (as well as macarons) changes monthly, which is as good excuse as any to keep returning. After breakfast, head up to the roof terrace of the department store in which the bar is situated for an incredible (and free) panoramic view of Venice, looking directly onto the Rialto Bridge and the Grand Canal. 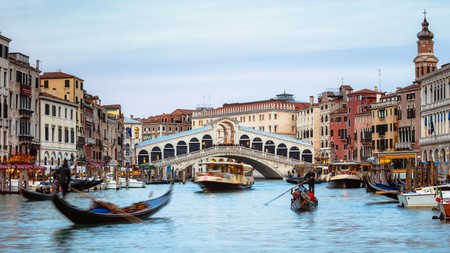 Giavedoni’s culinary career began in childhood with helping out in his grandfather’s bakery, and he’s got strong opinions on Venice’s best pastries. Aside from his own apple tart, his favourite in the city is the ricotta pastry from Pasticceria Nobile. Located in the Cannaregio district, this pastry shop prides itself on its colourful array of produce and its respect for tradition. Giavedoni recommends that visitors head to this pastry shop during carnival time, to try the traditional sweet treats produced for this celebration. The Venice Carnival is internationally known for its convention of elaborate masking, but the origins of the festival lie in being a last moment of excess and gluttony before the austerity of Lent – therefore, treats like frittelle and chiacchiere (both deep-fried pastries), are produced at this time, and make the perfect Venetian carnival breakfast.

For Venetian specialities all year round however, Giavedoni directs us to Pasticceria Tonolo, which is considered a Venetian institution. It lies just a couple of streets from one of Venice’s great artistic masterpieces, the Scuola Grande di San Rocco, which contains over 60 paintings by the celebrated Venetian artist Jacopo Tintoretto. Founded in 1886, Pasticceria Tonolo is one of the most popular places in the city to buy pastries. Here, Giavedoni recommends trying the fugassa around Easter time. This is a soft, sweet cross between a cake and a bread often topped with white sugar granules (differing from the savoury fugassa or focaccia from the Ligurian city of Genoa). Giavedoni also favours Pasticceria Tonolo as “a place for a quick breakfast on the go”. In doing so, you’ll rub shoulders with the Venetian community; race yourself to see if you can breakfast as swiftly as a Venetian. 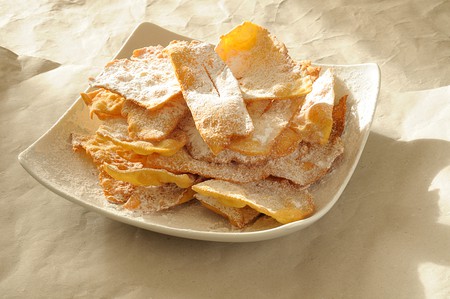 But if you follow the anglophone tradition of breakfasting leisurely at around 10 or 11am, you may begin to notice that coffee and pastry consumers are in the minority. That is because by this time the Venetians have moved on to another meal, namely the aperitivo. This snack before lunch usually involves a glass of wine and a couple of nibbles called cicchetti or crostini. For this type of meal, Giavedoni suggests trying All’arco, a traditional bacaro or Venetian bar in the sestiere (district) of San Polo. It sits close by the Rialto fish market, and Giavedoni says, “It’s an obligatory stop after having visited the market – the cicchetti that Francesco and his son prepare are exceptional”. They use plenty of fresh ingredients bought from the Rialto market, so here you’ll find cicchetti topped with various kinds of shellfish, octopus, and the classic baccalà mantecato. Giavedoni also particularly recommends trying the “panino with boiled veal cheek”. In typical bacaro style, drinks and snacks are inexpensive – perhaps dangerously so in the case of the €2 (£1.70) glasses of wine before midday – but when in Venice…

Giavedoni is passionate about the products used in his kitchens, and so it’s no surprise that he has sniffed out his favourite coffee brand in another bar in Venice; Aciugheta for an espresso because they serve Laboratorio Giamaica Caffè. He describes it as an “exceptional Arabica coffee with a refined roasting process”. In terms of food, Giavedoni again opts for a savoury, unconventional breakfast of what he deems the best pizza in Venice and a wine from their extensive cellar. His top insider tip? “Ask for their wine list, because they have a separate menu for enthusiasts.” Aciugheta is located just behind St Mark’s Square, and is the perfect quiet spot to retire to after the crowds in the piazza. 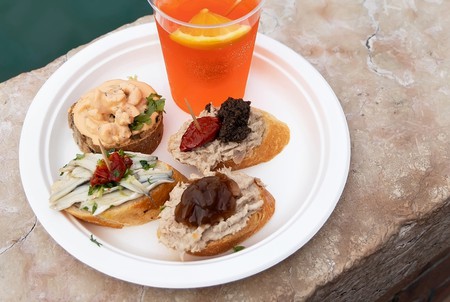 As everyone knows, when on holiday all the rules go out the window; and Giavedoni has a tip for those who identify as night owls rather than morning larks. “If you wake up late and have lunch for breakfast, [try] Casa Cappellari near Rialto. It’s a new restaurant which opened a couple of months ago, but it has high-quality products and wine,” he says. The emphasis here is on Venetian products and home cooking. The fish is bought from the historic fish market at the Rialto, and the pasta is all handmade in the restaurant.

As Giavedoni says, good breakfasts as they’re traditionally thought of are sometimes hard to come by in Venice. A quick pastry and then skipping straight to a boozy aperitivo and lunch is not altogether discouraged – just as long as you try Giavedoni’s beloved Laboratorio Giamaica Caffè at Grancaffè Quadri for an espresso to kick-start the day.

This article is an updated version of a story created by Sonia Cuesta de Andrés.