The 7 Best Beaches Within Easy Reach of Florence 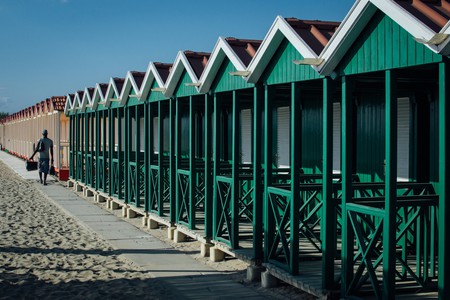 If you are visiting Florence and you need to escape from the crowd, you have to know that there are many beaches where you can go to relax only one or two hours away by train. Note them for the next summer or you visit them in these last days of sun and fun this year.

In the province of Lucca, Viareggio is the most easily reachable beach from Florence (just an hour by train or car). This historic seaside resort is mostly frequented by families because of its sandy beach and restaurants and bars you will find on the passeggiata, a big promenade close to the sea. There are a lot of well-equipped bathing establishments but little free beach. The sea is not beautiful like in other areas of Tuscany, but the beach is very close to the train station.

Forte dei Marmi, home to many of Italy’s VIP customers, has a pretty beachfront and a city centre with plenty of designer boutiques and gourmet restaurants. This is also the perfect place if you want to have fun with your friends; in the neighborhood there are several famous discothèques, often crowded during the peak of the season. Only an hour and 40 minutes from Florence by train, Forte dei Marmi is one of the most expensive sea destinations of Tuscany.

Castiglioncello is part of the Etruscan Coastline, one of the most fascinating areas of the region. For this reason, it is also called the pearl of the Tyrrhenian Sea. The beach is surrounded by pine woods and hosts several small rocky bays which boast pristine clear water. The train from Florence to Castiglioncello usually takes around one hour and 40 minutes.

Just 20 minutes by car from Pisa, you’ll find three beach options: Tirrenia, Calambrone and, the most known, Marina di Pisa. This last one is particularly adapt for families, because the beach is protected from the open sea by giant rock walls piled to act as barriers — making the experience much more pleasant, especially for those who are traveling with little children.

Livorno is Tuscany’s most important port. You can easily reach it by train (it takes only one hour and a half from Florence) and is also a nice town which deserves to be discovered – from the lovely Terrazza Mascagni to the colored Quartiere La Venezia, from the Aquarium to the Old Fortress just near the port. Along its coast there are several beautiful beaches, like Antignano, mostly frequented by the locals.

This beautiful beach is located in the Etruscan area of Tuscany and is popular for water sports and nature enthusiasts. It is just two hours from Florence by train, and the beach is situated just 700 meters walk from the train station. Near the beach, there is the Rimigliano Natural Park, a beautiful oasis which offers walking itineraries through untouched nature.

If you are looking for a place to hike and snorkel, the best option for you is Buca delle Fate, near the town of Piombino, in the south of Tuscany. The beach is famous for its crystalline water, silence and its stunning views over the Elba island. In the neighborhood there is also the Archaeological Park of Populonia, which is the most beautiful Etruscan Park of Italy.