The Best Bars in Assisi, Italy

Birthplace of one of Catholicism’s most revered saints and home to the Unesco-listed Basilica di San Francesco, Assisi is at its most beautiful when the day trippers have gone and the town gives way to sunset drinks in its peaceful bars.

As a Catholic pilgrimage site that centres on the tomb of St Francis, it’s perhaps not a surprise that Assisi isn’t known for banging nightlife. But while it’s not the place for a rowdy bar crawl, there are a number of excellent bars ideal for a sit-down and a glass of vino with your travel buddies. The drinking culture here is sedate and civilised, with an emphasis on locally produced wine and craft beer. Here are the best bars in Assisi, Italy. 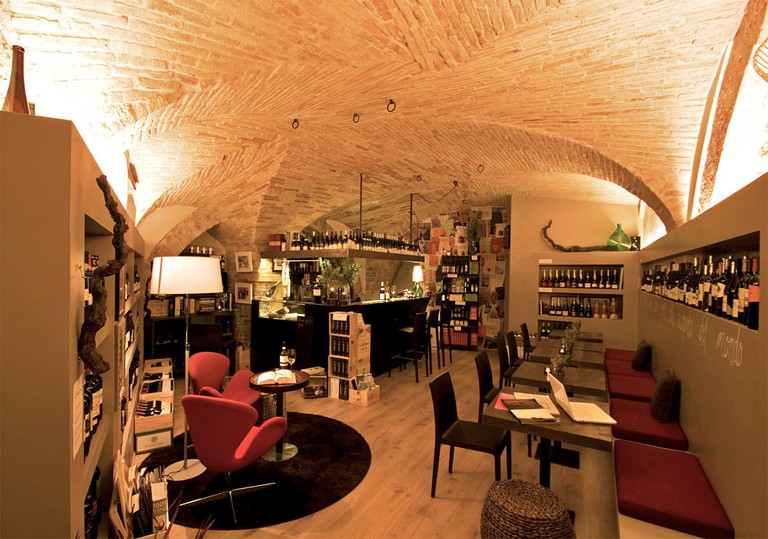 Courtesy of Bibenda Assisi
There’s not much that owner-sommelier Nila Halun doesn’t know about wine, and she’s more than happy to share her enthusiasm and expertise. Her esteemed wine bar is located right in the middle of Assisi’s old town, midway between Basilica di Santa Chiara and the ancient ruins of the Roman Forum. Turn up for a casual drink or put your learning cap on with a formal wine tasting.

Bar, Restaurant, Pub Grub
Facebook
Email
Twitter
Pinterest
Copy link
Share
Is there a more winning combination than cold beer and hot sun? In Assisi, the best place to find just that is at Terrazze di Properzio, which offers views beyond the city and across the valley below. Its main line of business is food, but it also stocks a wide range of craft beers which are as refreshing as the view.

In the heart of Assisi’s old town, this convivial wine bar celebrates Umbrian and Venetian wines. Plates loaded with cheese veined with truffles, and local cured meats, make the perfect accompaniment to a glass of full-bodied red or an aperitivo spritz beneath the vaulted stone ceilings.

This place on the edge of Assisi is part brewery, part beer hall, part hamburger joint. They’re especially passionate about craft beers, serving over 60 of them by the bottle and another nine on tap. Try Maplelicious from Tallinn brewery Põhjala, a dark ale aged over empty barrels once filled with Vermont maple syrup; or Aria, a fresh and fruity pale ale from Umbrian microbrewery Birra dell’Eremo. 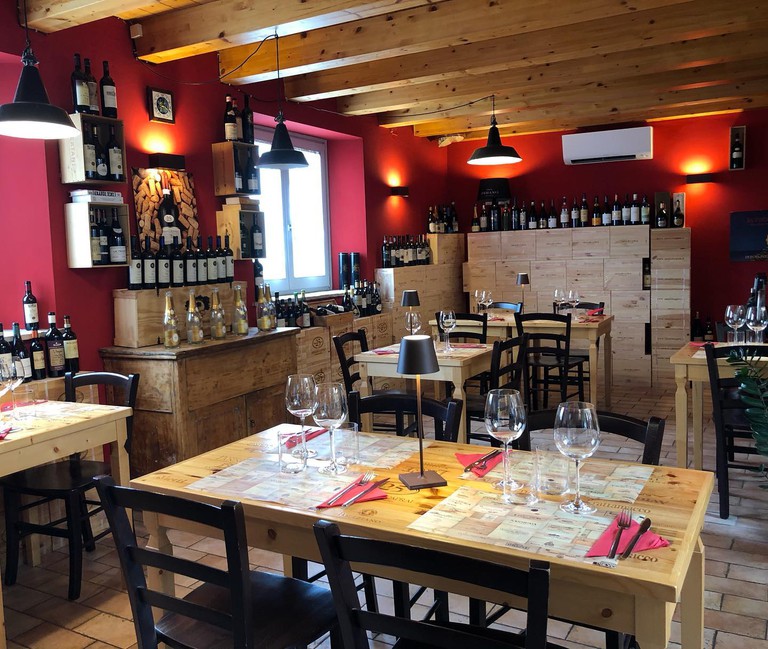 Courtesy of Enoteca Mazzini
This well-respected wine bar is tucked away just north of Piazza Santa Chiara. The choice of wines is staggering, with somewhere in the region of 1,500 different types on hand. Every available space has a bottle on it – windowsills, shelves, even upturned packing crates. Somehow they make room for tables too, though many locals prefer nursing a glass or two in the pretty courtyard.

This small beer hall close to the Basilica di San Francesco goes big on local ales. They can be paired with a wide range of salami, mortadella sausage and prosciutto in its other guise as a norcineria – a speciality butcher’s shop found only in Umbria. It’s a winning combination. Be sure to try the birra al tartufo, a truffle-infused, blonde beer which draws connoisseurs with its unusual flavour and earthy aroma.

Cafe, Bar, Italian
Facebook
Email
Twitter
Pinterest
Copy link
Share
As the working day draws to a close, this popular coffee haunt up the street from San Rufino cathedral reinvents itself as a bar. In summer, the cafe’s pavement tables fill up with regulars combining an aperitivo with a spot of people-watching. Order a drink and join them. Service can be slow, but if you’re not in a hurry there are plenty of comings and goings in the square to distract you while you wait.

Wine Bar, Italian
Facebook
Email
Twitter
Pinterest
Copy link
Share
This wine bar is conveniently located near Basilica di San Francesco. The owners are passionate about wine, hosting regular tastings and excursions to a local vineyard. If you don’t have enough time to get out of town, book their Tour of Umbria wine tasting. You’ll try several local wines, including a glass of montefalco sagrantino, accompanied by creamy pecorino cheese, bruschetta drizzled with extra virgin olive oil and some salami from Norcia.

Looking for somewhere to stay? Book into one of the best hotels in nearby Perugia and dine at one of its best restaurants. For a different slice of life in Umbria, don’t miss the quaint Medieval hill town of Gubbio, and stay over at one of its best hotels – they’re bookable on Culture Trip. From Assisi, it’s a two-hour drive to Rome; discover why you need to visit Italy’s capital, and read our guide to the must-visit attractions in the city.