The Best Hiking Trails in Italy 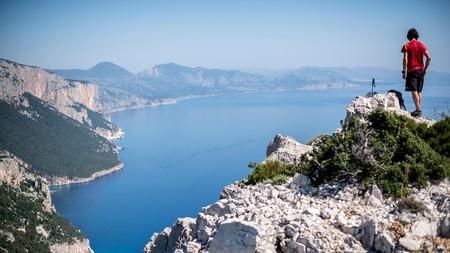 Italy’s not just famous for its food, history and art, it’s also got diverse hiking options perfect for discovering its stunning natural landscapes. With mountain trails in the north and volcano climbing in Sicily, the best time to come is spring and early autumn. Here’s our guide to the coolest destinations for hiking in Italy. 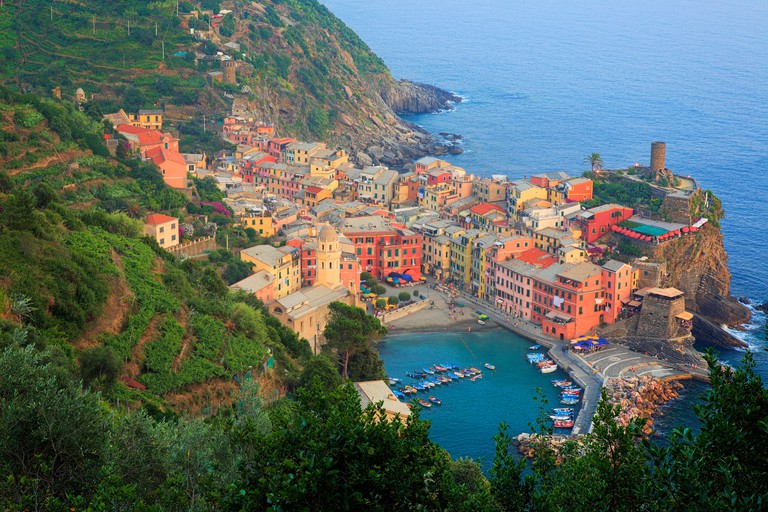 © Inge Johnsson / Alamy Stock Photo
Book Now
Cinque Terre is an iconic coastal region in Liguria, on the west coast of Italy. The five oceanside fishing villages perched on the cliffs in pastel colours look exactly like the photos: idyllic buildings, crystalline waters and breathtaking views. The perfect way to visit all five is to hike the Sentiero Azzurro (the blue path) from Monterosso to Corniglia, strolling through the picturesque hamlets and admiring the coastal landscape. 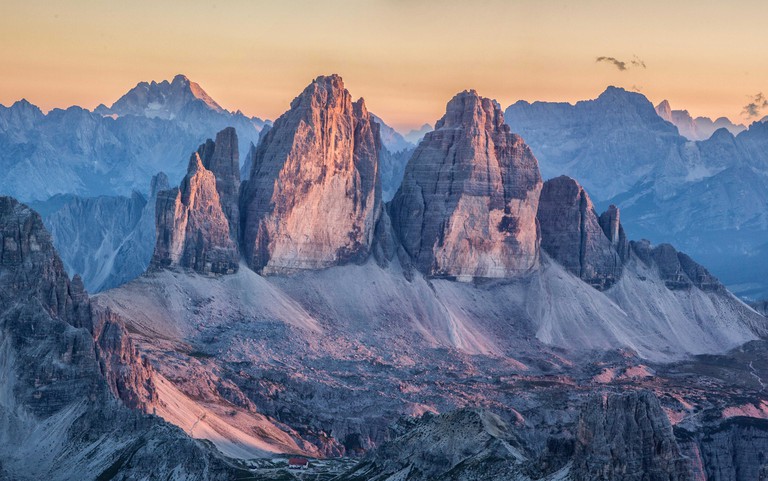 Nothing beats the Dolomites when it comes to hiking in Italy, and these amazing mountains are much less visited than the comparable Swiss or French Alps. They have it all: cloud-scraping mountains, idyllic lakes, limestone peaks and pristine forests. This area is full of trails and one of the best circuits is Tre Cime di Lavaredo in the Parco Naturale delle Dolomiti di Sesto. Don’t forget your camera, as the mountain range is highly photogenic. 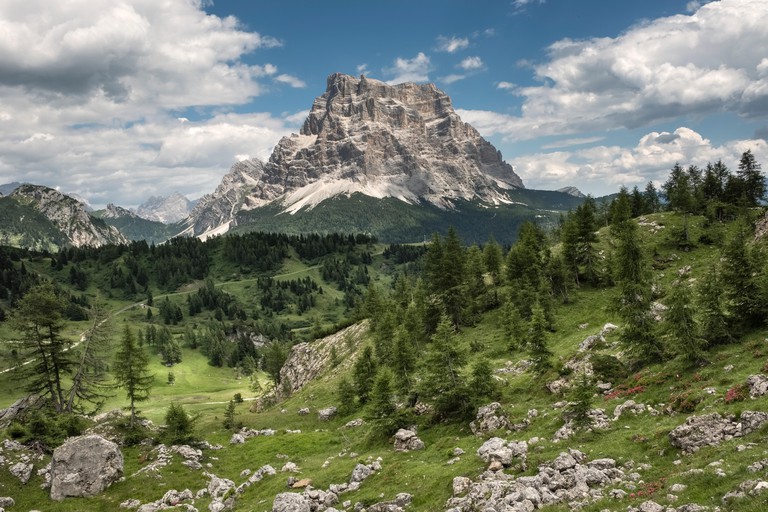 The best-known hiking trail in the Dolomites is Alta Via 1, a 120km (75mi) high-level trail over some of the finest scenery in the eastern Dolomites. This mountain range, a Unesco World Heritage site, is one of the most beautiful landscapes thanks to its vertical walls, deep valleys and sheer peaks that run from the enchanting Lake Braies (or Pragser Wildsee) to the city of Belluno. 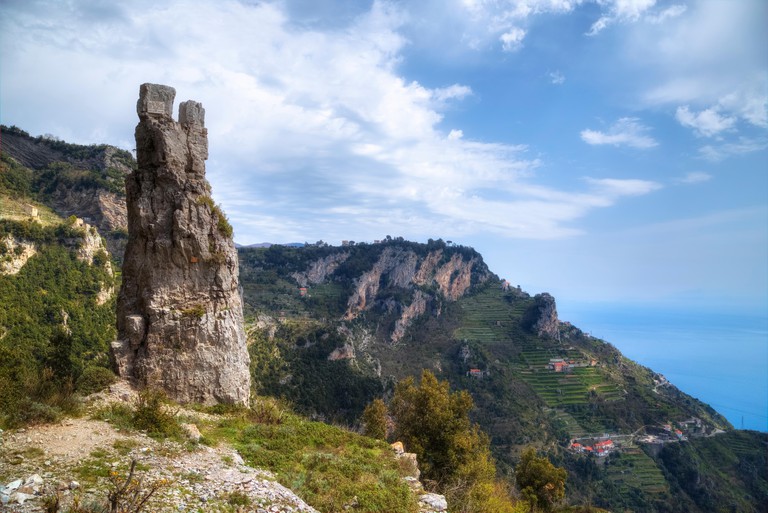 The Sentiero degli Dei, or Path of the Gods, is a must-visit destination in Campania, with terrific views of the rugged Lattari Mountains and island of Capri. The path links Positano with Praiano and winds through terraced hillsides and lemon plantations, with views over the mediterranean. 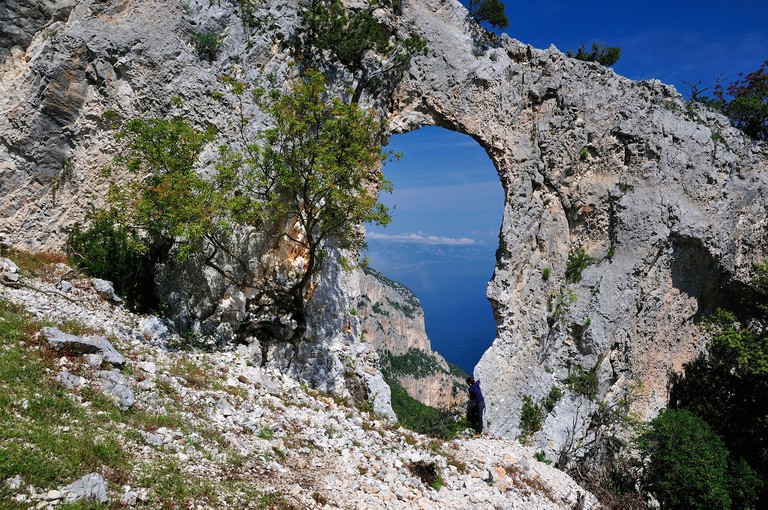 Sardinia is one of the most beautiful islands in the Mediterranean. The Selvaggio Blu (Wild Blue) hiking trail is recommended for those with mountaineering experience, but this epic route threading the cliffs by the Gulf of Orosei on Sardinia’s east coast is definitely worth the effort. Trek along one of Italy’s wildest, most isolated coastlines with terrific gorges, cliffs, vegetation and stunning views of the sea. 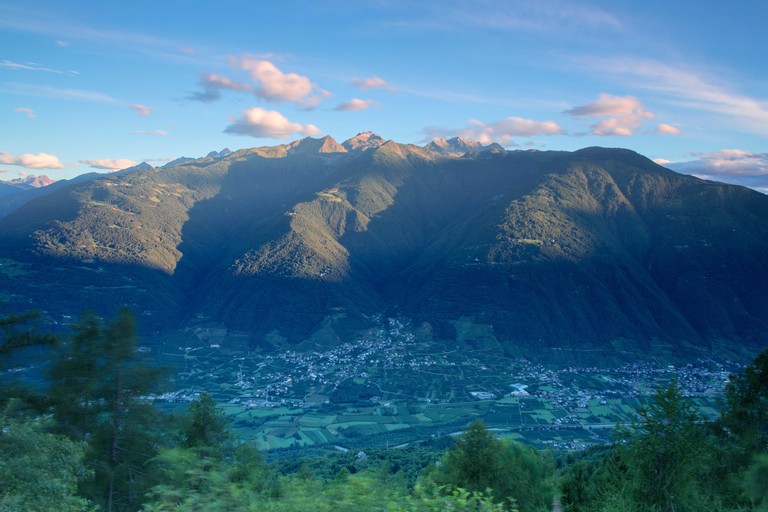 Valtellina extends 200km (125mi) in the northern region of Lombardy, smack in the middle of the Alps. Though often overshadowed by the Dolomites, it’s worth a trip to its parks and natural reserves that make up more than a third of the region. Popular hiking trails include the Alta Via della Valmalenco, Gran Via delle Orobie, Sentiero della Pace and Via Alpina in Valtellina. 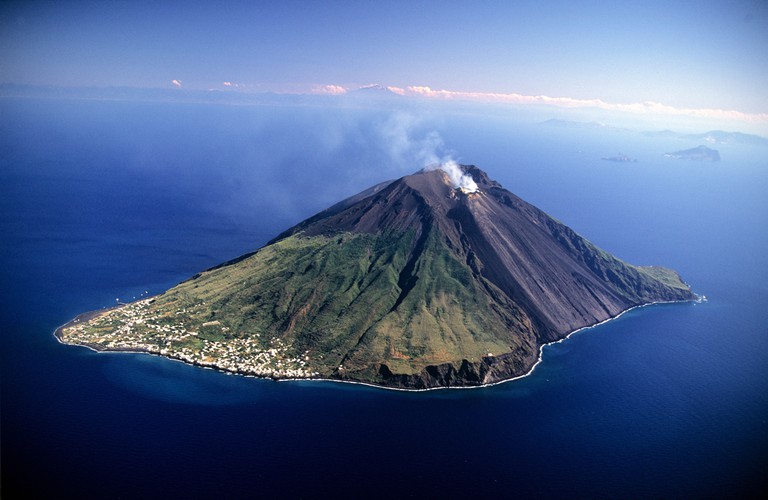 In one of the most remote areas of Italy, Stromboli is the jewel of the Aeolian Islands. For nature-lovers the climb to the crater is not to be missed, but beware: this island contains one of three active volcanoes in Italy, so it’s not possible to hike here every day. The contrast of the volcanic landscape with the turquoise sea is one of the most enchanting panoramas in Sicily. 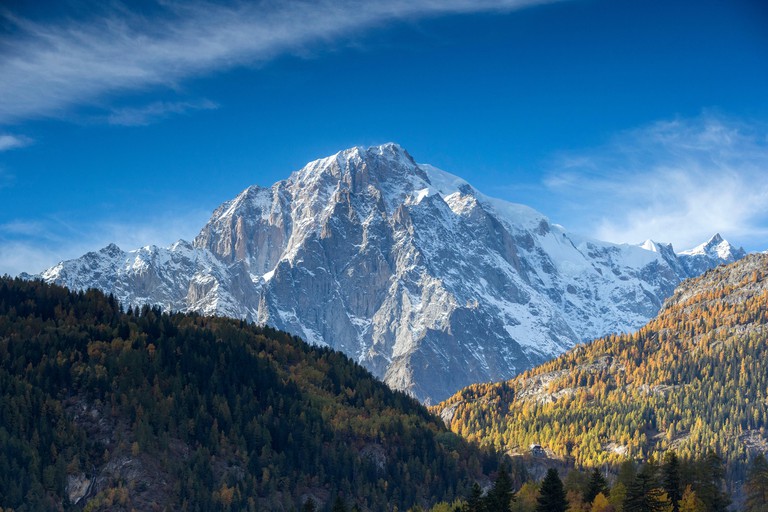 Valle d’Aosta, bordering France and Switzerland, is known for its sublime mountains, including Monte Bianco, Monte Rosa, Monte Cervino and Gran Paradiso. Monte Bianco (Mont Blanc) is the highest mountain in the Alps, and world-famous. The tour of the ‘White Mountain’, which is considered one of the classic trails in Europe, starts from Courmayeur at the foot of the mountain. Monte Rosa is the second highest mountain in the Alps and its name ‘rosa’ (meaning pink) has nothing to do with the colour, but derives from the local word for glacier, rouése. 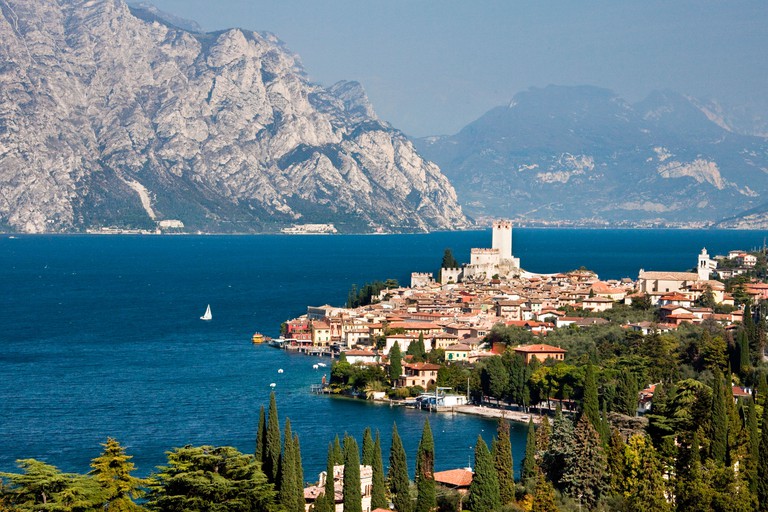 If you’re planning a hiking trip in the spring or autumn, come to the Italian Lakes. The breeze off the water keeps hikers cool, and it’s also possible to swim or take out a boat. Lake Como is the ideal spot if you want to explore scenic towns such as Bellagio, Tremezzo or Varenna, while Lake Maggiore is off the beaten track. Lake Garda has fantastic hiking trails for mountain lovers, in addition to cosy towns with local flavour. 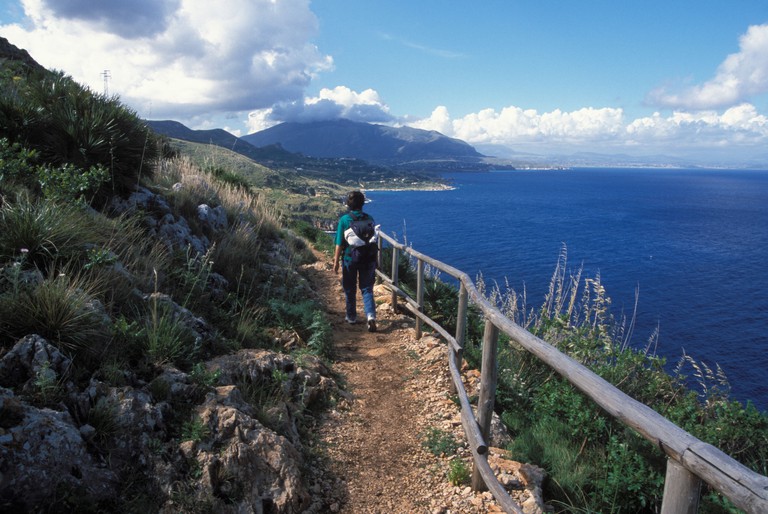 Sicily is a wonderful hiking destination. If you don’t feel like taking a ferry to Stromboli, a great alternative is to climb the mountainous areas of Mount Etna: the Madonie and Nebrodi Mountains. Perfect for hikers who prefer forested trails, both have park trails running through them. One of the prettiest is the Vendicari Nature Reserve which runs along the coast and is relatively flat. The nearby Pantalica Gorge is an archaeological site in addition to its beautiful trails. 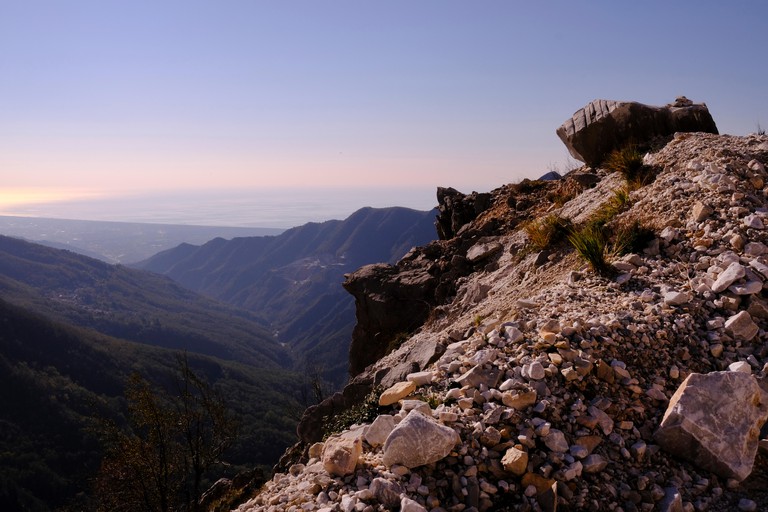 Tuscany is home to Italy’s greatest art cities but only a few people know it’s possible to spend time here hiking as well. Three of the best trails include the Renaissance Ring circling the city of Florence, the Chianti Trail (perfect for a wine-themed itinerary between vineyards and medieval villages) and the hiking trails of Val d’Orcia, through Crete Senesi. 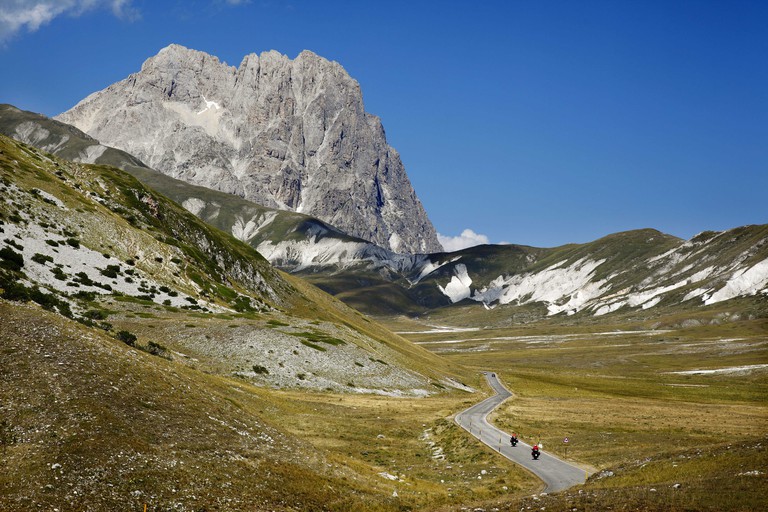 Dominating the rocky landscape of the Parco Nazionale del Gran Sasso – one of Italy’s largest national parks – is Corno Grande, the highest peak in the Apennines. Abruzzo is not the most visited destination in Italy, but it contains authentic treasures like this mountain. Via normale is the route that will provide you with views of the mountain and Adriatic, as well as Europe’s southernmost glacier, the Calderone.