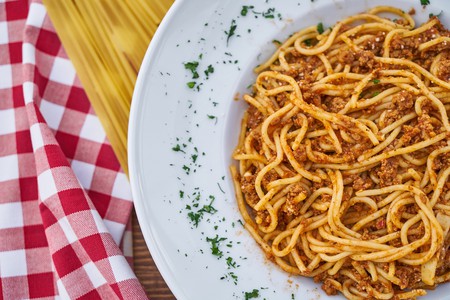 When it comes to food, Italians are purists. Having perfected such a delicious cuisine, they certainly don’t want anyone messing with it. Ordering pizza with pineapple or liberally sprinkling parmesan on top of seafood linguine might not turn heads in the UK, but do it in Italy, and you’re committing a sin. Discover the 11 most embarrassing food mistakes to avoid making in Italy.

It’s no big deal in British and American kitchens, but pasta with chicken is unheard of in Italy. It could be because the texture of chicken is too similar to cooked pasta, or maybe it’s just because that’s not what Nonna used to do, but chicken is kept strictly to the secondo, or second course. 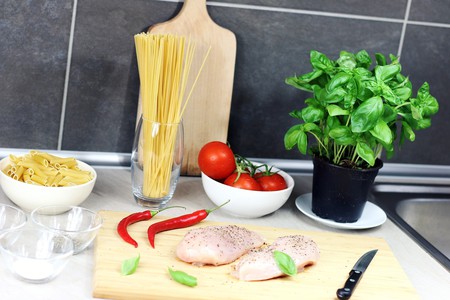 All the ingredients for a truly inauthentic Italian meal | © Stocksnap/Pixabay

Serving Everything on the Same Plate

Meals in Italy are often long and drawn-out affairs to be lingered over and enjoyed. As such, there’s a set order to the courses: The antipasti, or starters, are followed by the primi, which is usually soup, pasta or rice. Only then does it move on to the secondo, or meat course. Unlike the British idea of ‘meat and two veg’ (and everything else) on one plate, Italian courses should be tasted and appreciated individually. Although vegetables can be ordered as a contorno, they’ll still be served on a separate plate, so serving risotto or pasta alongside anything else is frowned upon.

Whether it’s for dipping pizza crusts into, or, worse still, putting on pasta, ketchup has no place on an authentic Italian table. The Academia Barilla, run by the world’s leading pasta brand, called ketchup on pasta ‘a true culinary sin,’ so leave it for your French fries. 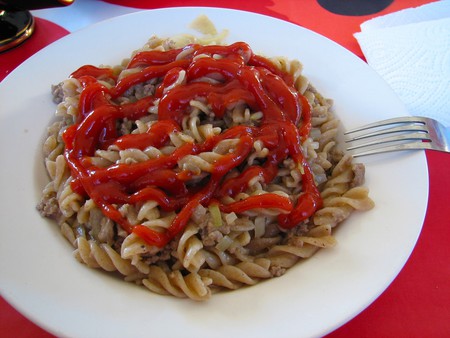 Ketchup is not an appropriate sauce for pasta | © Antti T. Nissinen/Flickr

Drinking a Cappuccino After a Meal

Heavy with milk and, in the eyes of many Italians, difficult to digest, cappuccino is strictly a breakfast drink. For a post-dinner caffeine boost, opt for an espresso or caffè macchiato (which has just the tiniest drop of milk) instead. 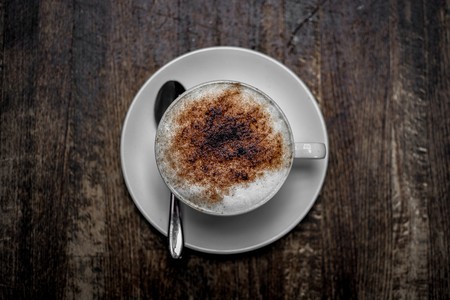 Stick to Cappuccino at breakfast | © Pexels/Pixabay

Despite having been invented in Rome, Fettuccine Alfredo is not the classic Italian dish many Americans, in particular, think it is. Just two restaurants—both claiming to be the birthplace of the dish—serve it. Ask for it anywhere else and expect to be met with blank expressions. Likewise, Caesar salad was first created in Mexico, and the Hawaiian pizza was invented by a Greek-Canadian.

Sprinkling Parmesan on Everything

To many non-Italians, parmesan is a default cheese that can happily be sprinkled on any pizza or pasta dish in huge quantities. Firstly, pizza does not need extra cheese, and secondly, the chef has carefully prepared each recipe, so don’t mask its flavour with mountains of parmesan. If pecorino is offered instead, then feel free to use it—different dishes use different cheeses—but if no cheese is offered, then there’s probably a reason. Cheese on seafood dishes, for example, is a huge no-no.

Bread, olive oil and balsamic vinegar—it just sounds so Italian, doesn’t it? It isn’t. Save the bread for the end of the meal, and use it to fare la scarpetta, to make a little shoe. In other words, use a small piece of bread to mop up any remaining sauce, and enjoy every last morsel of your meal. 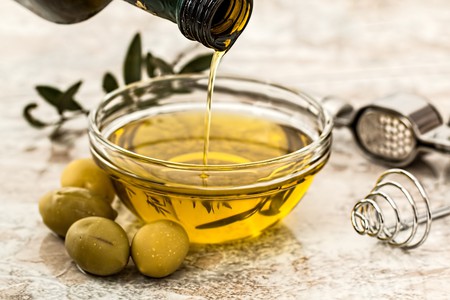 Save the oil for dressing salad | © stevepb/Pixabay

Drinking Anything Other Than Water or Wine With Food

Much Italian cooking is relatively simple, and many recipes rely on the top-notch quality of the ingredients to create a dish that is greater than the sum of its parts. With such care put into the food, drinks are given equal consideration. Opt for a wine that complements the food, or stick to bottled water. Cocktails are aperitifs and meant to open the appetite, and sugary soft drinks mask the flavour. One exception is beer, which goes great with pizza or fried foods.

The correct method for cooking and serving pasta is to tip the almost cooked pasta into the warm sauce (no prepared jars here, please) and stir them together in the pan. This allows the pasta to absorb the flavour of the sauce and creates a consistent taste in every forkful. Blobbing sauce just in the middle only results in sticky lumps of plain pasta. 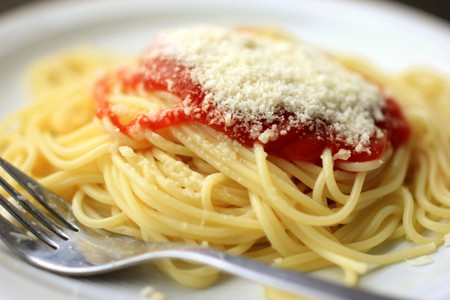 Spaghetti getting drier by the second | © Christian Schnettelker/Flickr

Spaghetti bolognese does not exist in Italy, and it’s best not to try and convince Italians otherwise. Instead of spaghetti, ragù is served with tagliatelle and is principally made with veal or pork mince and red wine—no mushrooms or tomato. Similarly, carbonara is made with eggs and cheese, not cream. Last year, Italians were scandalised when French website Demotivateur posted a so-called carbonara recipe, which involved boiling pasta together with onions and bacon before mixing with crème fraiche and topping with a solitary egg yolk.

Pasta should be cooked al dente—to the tooth. Not only does a bit of bite make the pasta taste better, it helps it to hold the sauce better (overcooked pasta turns the entire dish mushy). It’s also better for your health; the more pasta is cooked, the more vitamins are lost, and the more its sugars are broken down. Al dente pasta, on the other hand, has a lower glycemic index and keeps you fuller for longer.