The 57th Biennale di Venezia | Photo Andrea Avezz˘. Courtesy la Biennale di Venezia
Every two years the biggest international art festival takes place in the beautiful watery city of Venice. La Biennale di Venezia (Venice Biennale) takes over the Giardini, Arsenale and numerous offsite locations, to present 87 national pavilions to over 500,000 visitors. You can expect to be wowed by performance pieces, transfixed by sculptural interventions and entranced by video installations. With so much to see our Art & Design Editor, Freire Barnes has whittled the choice down to a manageable, yet enthralling pick of the ten best pavilions that you must see this year.
Ai Wei Wei with Tehching Hsieh at ‘Doing Time’, 2017 © Hugo Glendinning

Between the 1970s and 1980s, Taiwanese artist Tehching Hsieh created an intense body of work that considered the commodity of experience, systems of control, existing on the edge of society and the archiving of time. Presented here for the Taiwan collateral pavilion, Doing Time includes a selection of five works, most significantly two installations of Hsieh’s impressive and utterly astounding One Year Performances that have to be seen to be even half believed. Through different forms of documentation including film, photography and paraphernalia, you are transported back to when the artist subjected himself to live outside for a year without shelter and clocked in every hour, every day for a year on a worker’s time clock. Doing Time is unmissable and worth every minute. 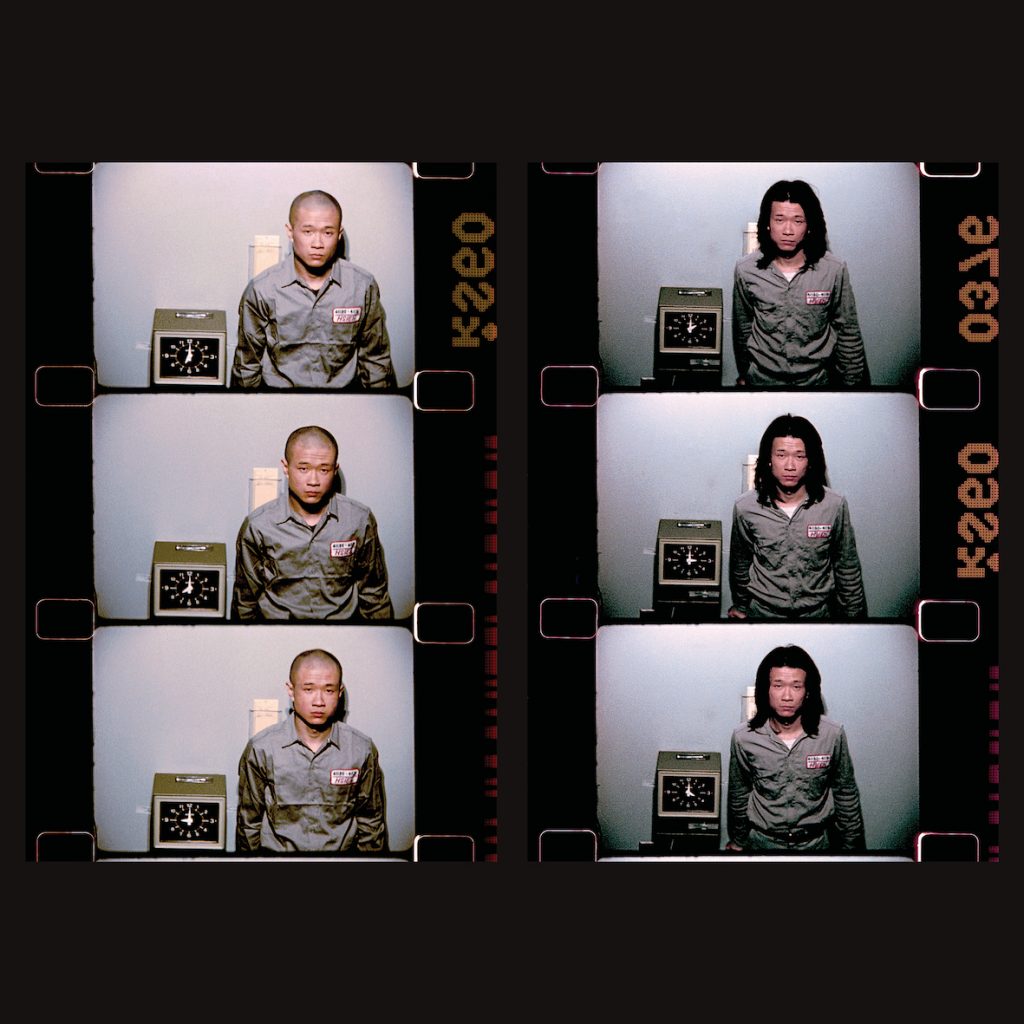 As the first African winner of the Golden Lion in 2013, the Angolan Pavilion is always worth a visit. And this year does not disappoint with the solo presentation of the engaging and thought-provoking film work of António Ole – who actually curated the Angola Pavilion at the 56th Venice Biennale. Magnetic Memory / Historical Resonance looks at the birth of Angola as a nation and its key political moments through the lesser known films of Angola’s most prominent artist. The video installation creates a poetic snapshot of national identity born through expression of music, the struggle for survival, and the dissolution of oppressive leadership. 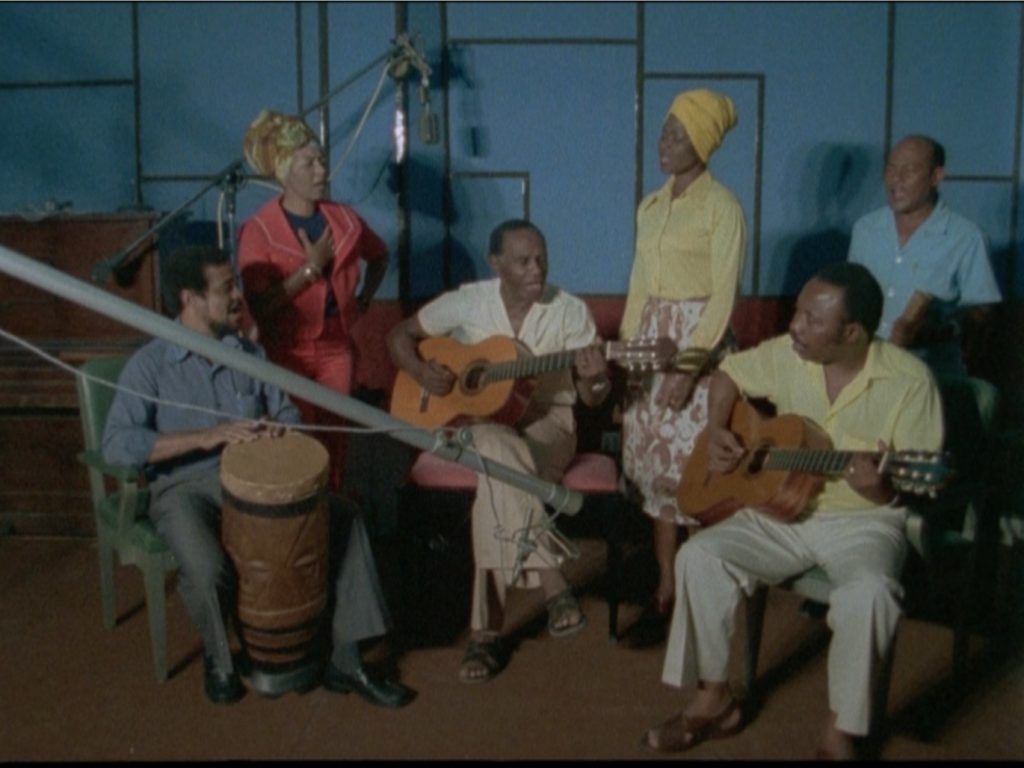 For the first time in the Romanian participation‘s history at the Venice Biennale, the pavilion has been given over solely to a woman artist. And what a wonderfully refreshing take Geta Brătescu gives the space with Apparitions, which unites the multifarious threads of her career and expresses positivity at a time of great unrest. Working across many media including drawing, collage and photography, the show focuses on two themes: the studio and reflection on female subjectivity, creating a captivating and enlightening environment to forget the troubles of the world.

Geta Brătescu:Apparitions is in the Giardini and New Gallery of the Romanian Institute for Culture, Campo Santa Fosca, Palazzo Correr, Cannaregio 2214. 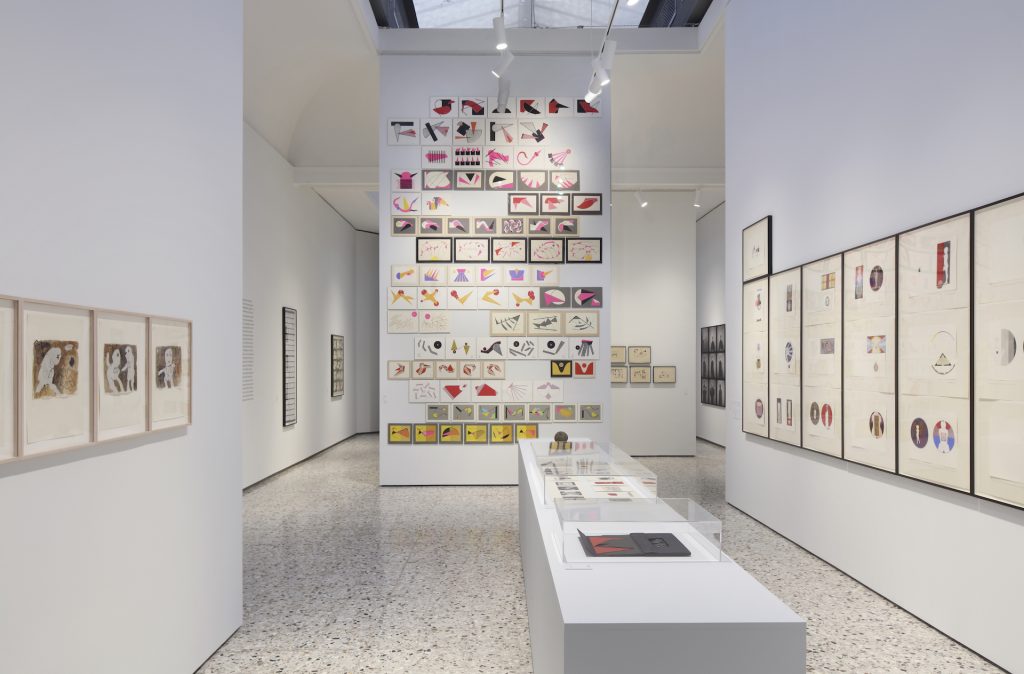 Il mondo magico, which means The magical world, presents three Italian artists, Giorgio Andreotta Calò, Roberto Cuoghi, and Adelita Husni-Bey who look at magic, the power of imagination and myth of the fable. The standout project is Roberto Cuoghi’s Imitazione di Cristo, in which Christ statues are being created out of organic material in an impressive faux workshop. Like a forensic investigator, you get to walk through the production line of decomposing Christ’s and reflect upon the power of iconographic imagery. 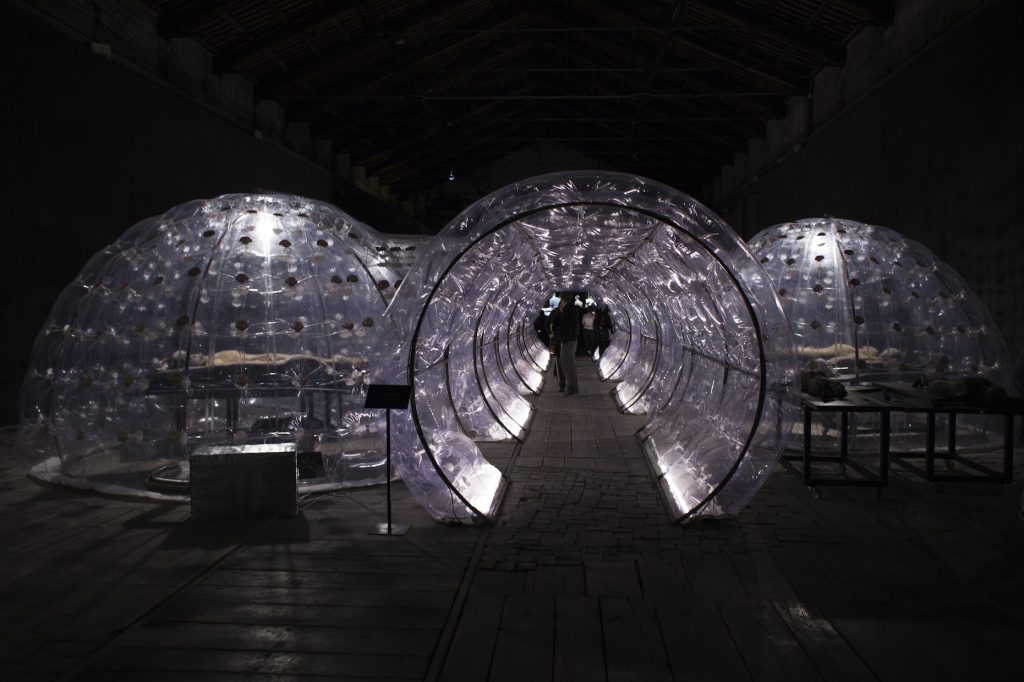 As the future of the United States National Endowment of the Arts hangs in the balance, Mark Bradford’s exhibition Tomorrow Is Another Day reminds us of art’s power to transform and inspire. Reflective of his own artistic experience and artistic positioning, Bradford has filled the US pavilion with ‘a multilayered narrative’ of abstract paintings and sculptural forms to highlight the current crisis of modern America and the social issues around marginalized communities.

Mark Bradford: Tomorrow Is Another Day is in the Giardini and San Polo 2559/A (Fondamenta dei Frari). 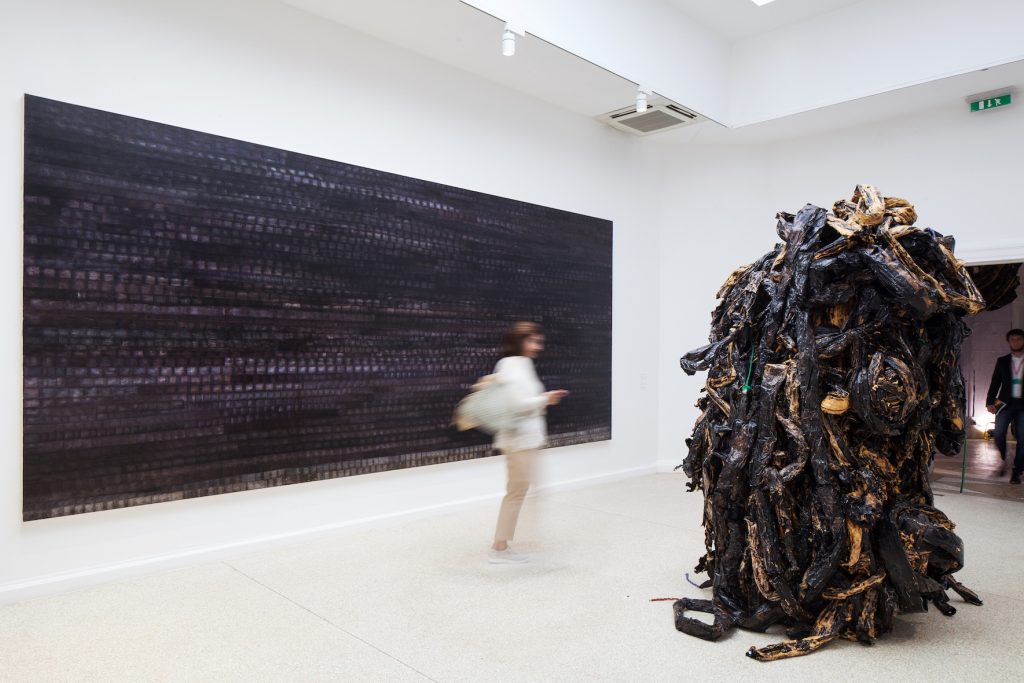 Existing somewhere between dream and reality, Vajiko Chachkhiani’s installation Living Dog Among Dead Lionssites a house from the Georgian country inside the Arsenale. This unexpected installation is yet further made startling when upon closer inspection you discover the interior is overcome by inclement weather as it is raining inside the furnished house. Part surreal, part melancholic, this uncanny installation comments on the invisibility of the ordinary and is an experiential delight.

Vajiko Chachkhiani: Living Dog Among Dead Lions is in the Arsenale. 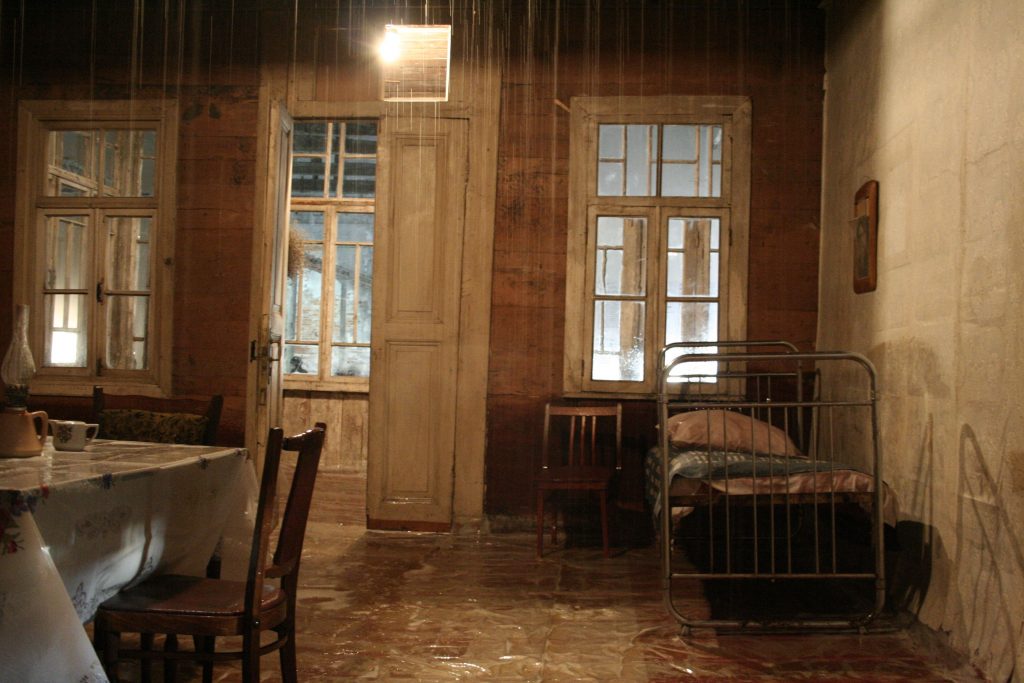 Candice Breitz and Mohau Modisakeng have created a heart wrenching two-person exhibition for the South African pavilion that focuses on the historical and contemporary plight of forced migration. Both have approached the narrative of displacement through film, but with very different outcomes. Breitz has used famous American actors Julianne Moore and Alec Baldwin who powerfully enact the interviews of six refugees to consider how empathy is produced, while Modisakeng’s immersive three-channel installation, Passage focuses on the history of slavery.

Candice Breitz + Mohau Modisakeng is in the Arsenale.

One of the pavilions that absolutely everyone talked about during the Biennale’s preview days was by the young German artist Anne Imhof. Her provocative durational-performance, Faust not only won her the 2017 Golden Lion for Best National Participation but also long queues of patient visitors, keen to witness the artist and her troop of performers.

Anne Imhof: Faust is in the Giardini. 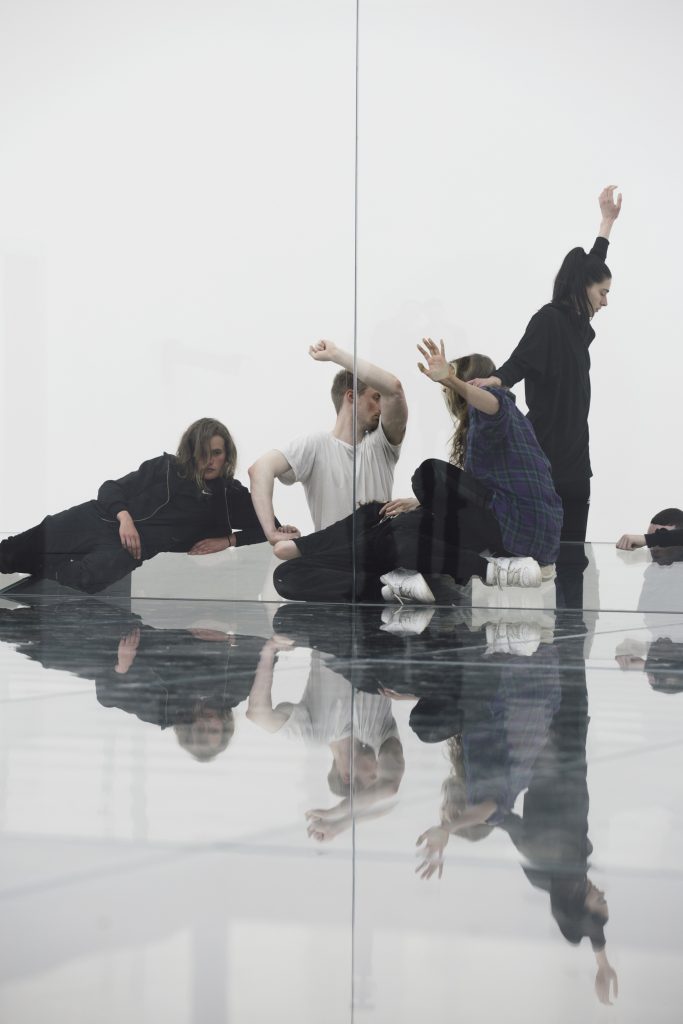 Returning to the Venice Biennale after a 17-year hiatus, the Malta pavilion presents the group show, Homo Melitensis. Through the juxtaposition of historic cultural artefacts with contemporary Maltese art practices, the artist-curators Raphael Vella and Bettina Hutschek playfully interpret the spirit of the Maltese identity, examining nationhood and diaspora through the nonhierarchical installation.

Homo Melitensis: An incomplete inventory in 19 chapters is in the Arsenale. 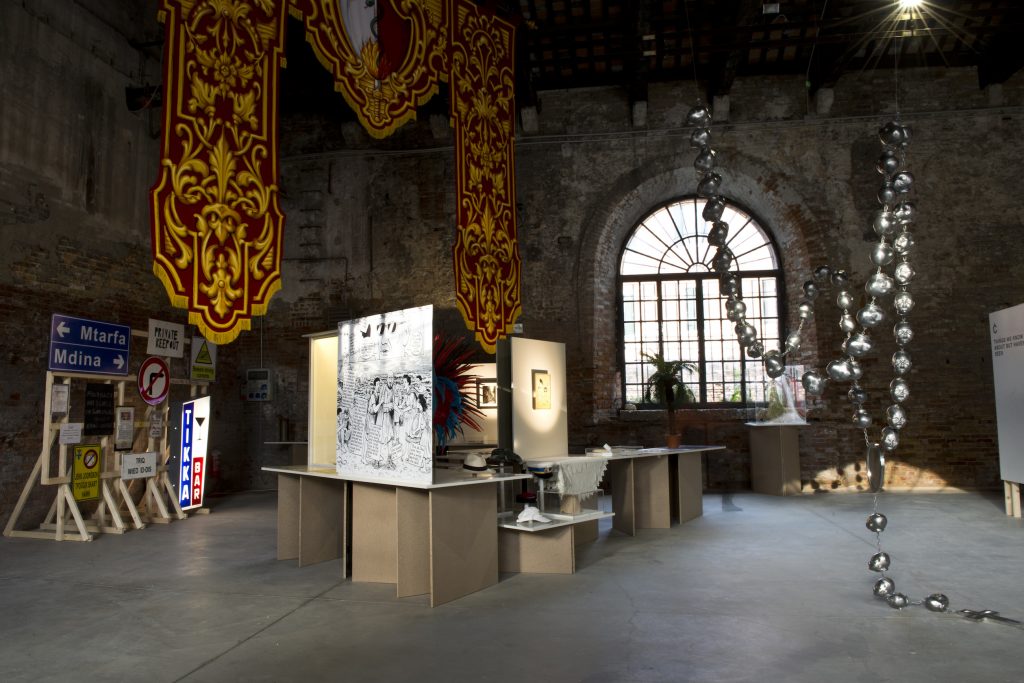 Church
Rachel Maclean, Installation view of Spite Your Face, 2017 | Courtesy Scotland + Venice. Photo Patrick Rafferty
Rachel Maclean’s exploration into the dystopian realms of the folkloric, subverts the Italian children’s story The Adventures of Pinocchio into a modern day recurring nightmare for Scotland’s 2017 pavilion. Inside the deconsecrated church of Santa Caterina, Spite Your Faceparodies the desire of greed and the allure of false advertising in a fascinatingly scary looping film.
More Info
Open In Google Maps
Venice, Italy
View menu
Visit website
Visit Facebook page
Send an Email
Give us feedback
Give us feedback