The Best Hotels in Catania, Italy 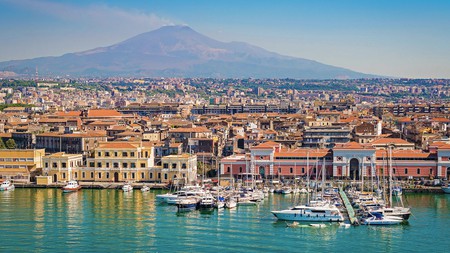 On the horizon, Mount Etna provides a beautiful backdrop to the cityscape of Catania, Italy | © NAPA / Alamy Stock Photo

The second-largest city in Sicily, Catania is chosen every year by thousands of tourists as the ideal destination for a holiday when it comes to ticking all the boxes for relaxation, nature and culture. We’ve put together a list of diverse hotels for those heading to Catania’s Mediterranean climes.

The east coast of Sicily seduces travellers in many ways: with dramatic scenery, down-to-earth markets and historic architecture. Yep, the province of Catania – facing out to the Ionian Sea – has it all, from sun-beaten fields and beautiful sandy beaches to the towering peak of Mount Etna and a pretty port capital (also called Catania). You could fill a week or more exploring its diverse corners, but, to do that, you’ll need a superb place to stay. So, welcome to our list of the best hotels in Catania. 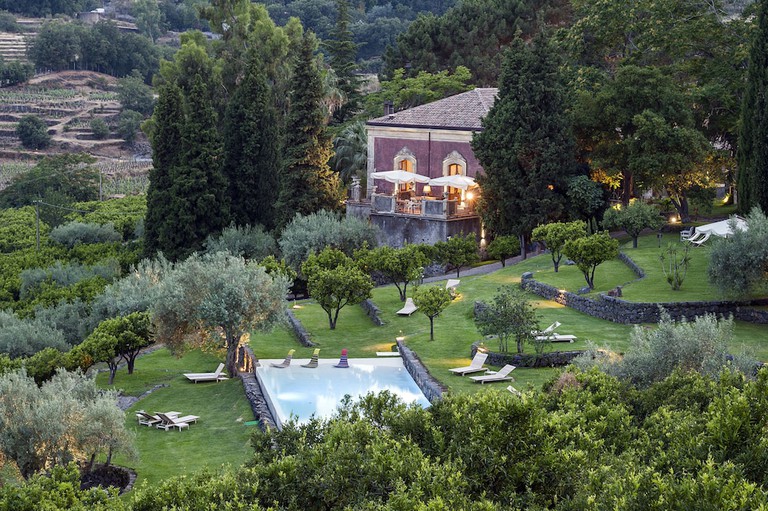 Courtesy of Monaci delle Terre Nere / Expedia
View Rooms
From $342 Per night per room
Northeast of the port capital, at the foot of active Mount Etna, Monaci delle Terre Nere is truly picturesque. The estate was home to monks in the 18th century, and, from the tiled roof to the ornate window mouldings, the historic atmosphere continues to prevail. Cloaked in 25ha (62 acres) of farmland and vineyards, the great outdoors are a major focus, with horseback rides, herb-garden strolls and sunrise breakfasts being part of the draw. But, the real highlight? The Relais & Châteaux restaurant, Locanda Nerello, overlooking the Mediterranean Sea.
More info 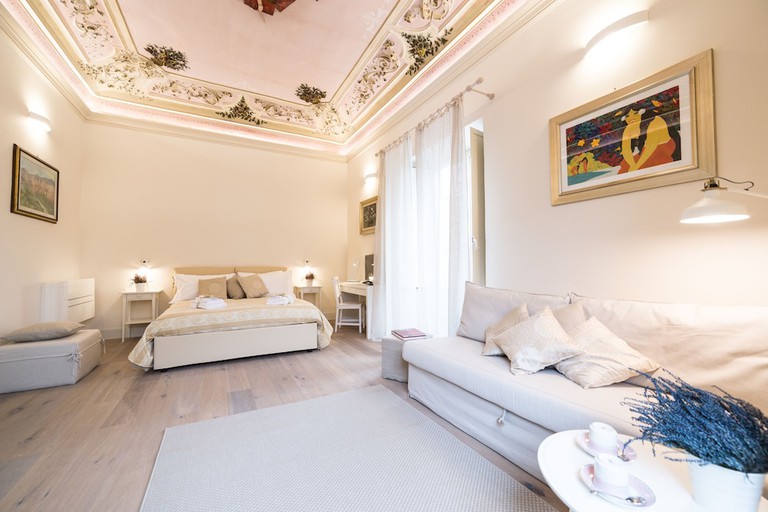 Courtesy of Il Leone Blu / Expedia
View Rooms
From $120 Per night per room
Dressed in milky hues – from walls to linen – this romantic stay in the heart of the port of Catania is a perfect jumping-off point for discovering the charms of the city. In fact, you’re just a 5-minute walk from the must-see Piazza Duomo (home of the Sant’Agata cathedral) and the Palace of the Seminary of the Clerics, among other sights, and the B&B overlooks the impressive Castello Ursino. Mind you, with the pretty frescoed ceilings and included buffet breakfast at Il Leone Blu, there’s no need to rush out.
More info 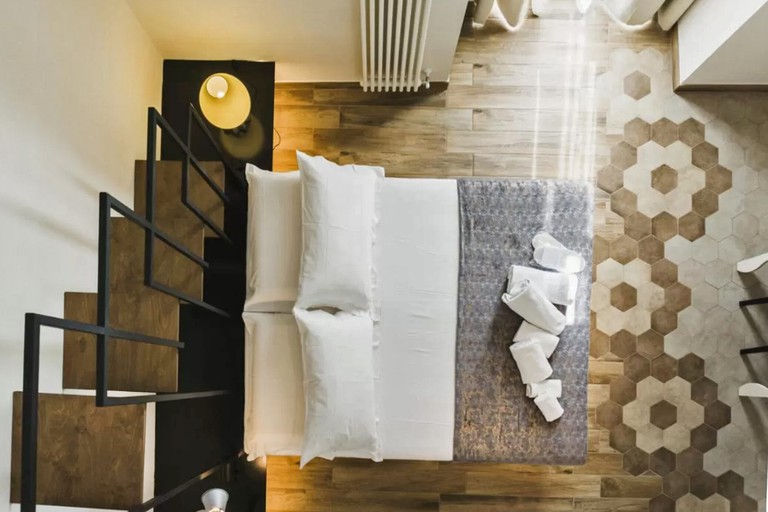 Courtesy of Catania House / Expedia
View Rooms
It may be set in an atmospheric old building on Via Garibaldi, but Catania House is far from stuck in the past: the rooms mix original touches with sleek minimalist four-poster beds, metallic highlights and trendy geometric tiling. There are only four of them, too, which gives this place a lovely intimate vibe. Meanwhile, staff are on hand with personalised recommendations for the best restaurants and street-food stops in the city.
More info 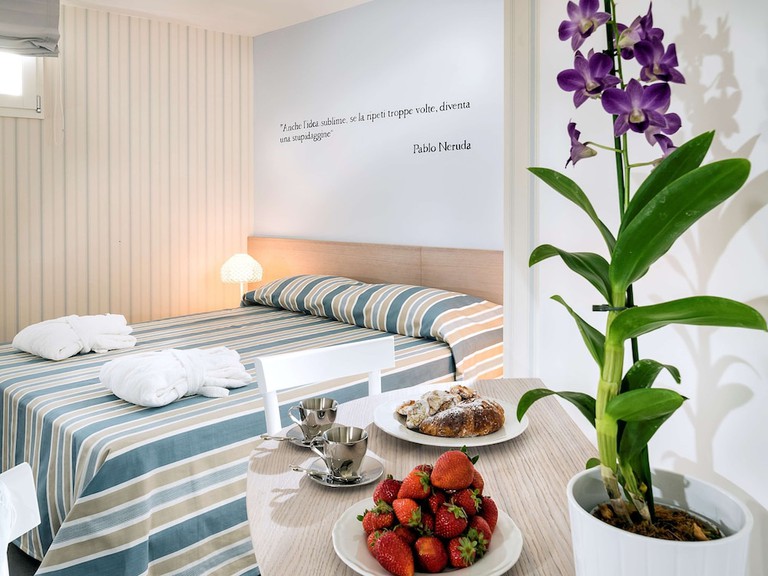 Courtesy of Duomo Suites & Spa / Expedia | Courtesy of Duomo Suites & Spa / Expedia
View Rooms
From $128 Per night per room
Steps from Sant’Agata cathedral (the duomo in Catania), the name of this hotel is fitting: you can be up early to snap atmospheric pics of the opulent baroque frontage before the tourist crowds descend. Unique rooms – each is named after a different film starring Sicily – come in monochrome stylings with the occasional flash of colour, and there’s a cosy spa, too. But, it’s the roof terrace overlooking the illuminated cathedral that you might love the most.
More info 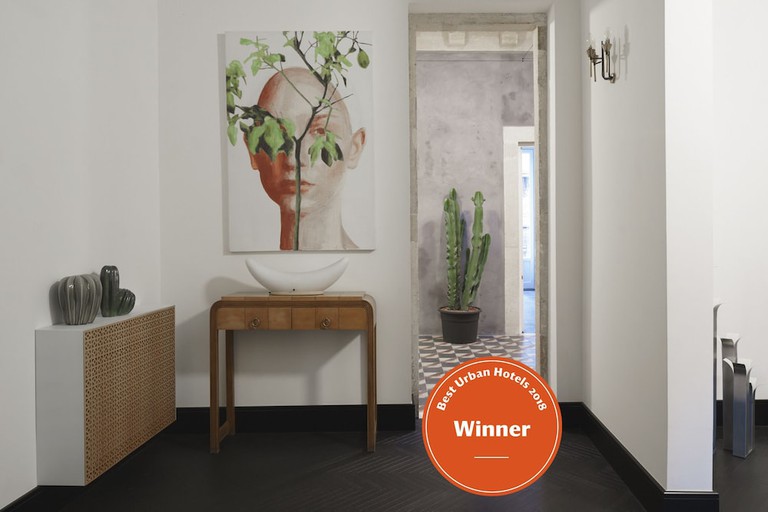 Courtesy of Asmundo di Gisira / Expedia
View Rooms
From $182 Per night per room
From the eye-catching wall frescoes to the pink flamingo sculpture, there’s a lot vying for your attention at this design hotel in the centre of Catania. The bones are old – the building dates to the early 18th century – but half the rooms have a distinctly contemporary feel, with reflective surfaces and one-off art pieces (they’re all named after characters from different ancient myths). The other half? Oozing a Neoclassical atmosphere, from art to chandeliers, with just the occasional modern touch.
More info 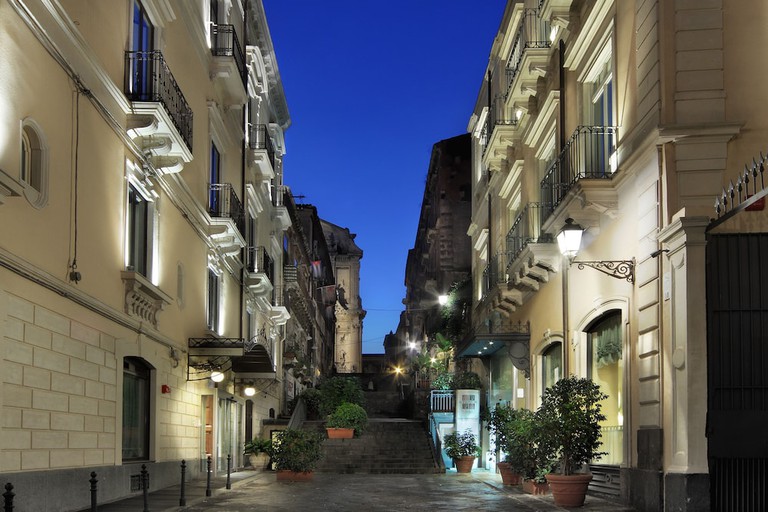 Housed in a renovated aristocratic building between two of the most charming streets in the city, Via Etnea and Via Crociferi, Il Principe Hotel offers comfortable rooms dressed in a mix of whites, creams and browns. There are a small fitness centre and a piano bar, but the true draw is the location, just a 4-minute walk from Piazza del Duomo. 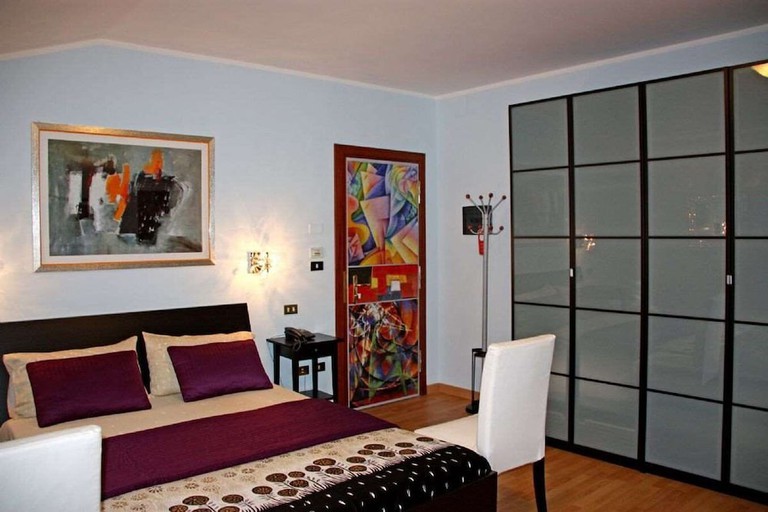 Courtesy of Hotel Villa Romeo / Expedia
View Rooms
From $84 Per night per room
The wood-panelled lobby, with Chesterfield seating and wall frescoes, hints at a hotel leaning towards the classical. And that style certainly flows through to the rooms and suites, where elaborate headboards and chandeliers befit an Italian noble. More elegance is found in the courtyard-style terrace, packed with potted plants and plenty of charming places to soak up the sun. Head to the solarium for more vitamin D and an al fresco shower.
More info 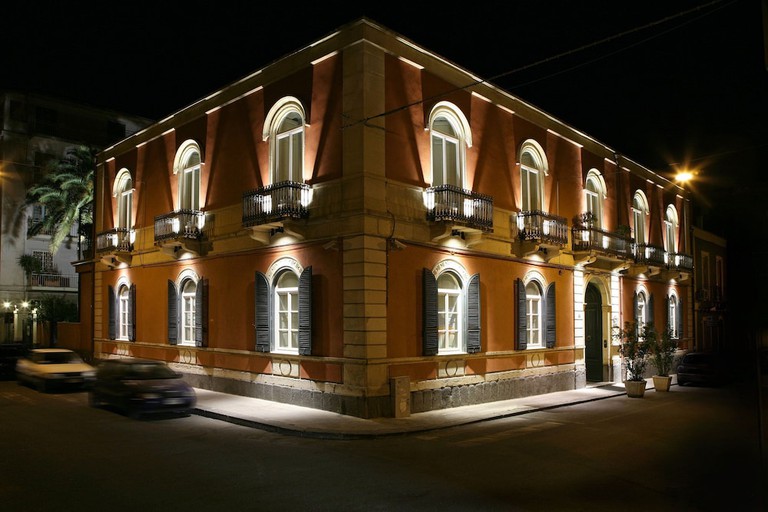 Housed in a Liberty-style villa dating to the early 20th century, this hotel features 18 rooms, among which are seven luxury suites, nine standard doubles and two singles. There’s a rather romantic winter garden with arches covered in white jasmine, plus a breakfast hall for your morning pick-me-up. Head to the Lanzerotti Hall, decorated with antiques, for a quiet moment. 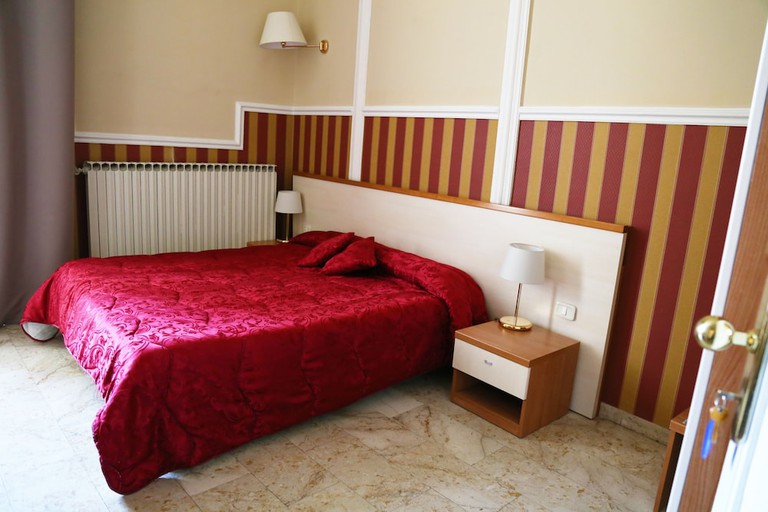 Located in the heart of Catania, this hotel originated from the well-preserved ashes of a local palace. And, situated close to the famed Giardino Bellini, an 18th-century park extending over 70ha (173 acres), it’s about as central as you’d want. Every day, an Italian breakfast is served in the breakfast room. All the rooms are cleaned on a daily basis, and a washing service is available upon request. 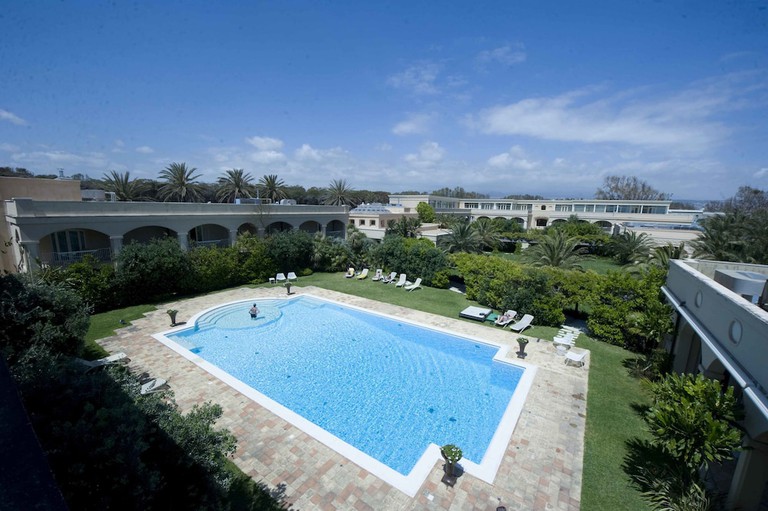 Ideally located on the Catania waterfront, between the baroque charm of the city and the never-waning beauty of the sea, Romano Palace guarantees an indulgent stay. As the first five-star hotel in Catania, it has the overall look of a Roman villa but is decorated with trinkets from across the globe. A central swimming pool with massage jets should be your first stop after you touch down at the international airport, which is just a 5-minute drive away. 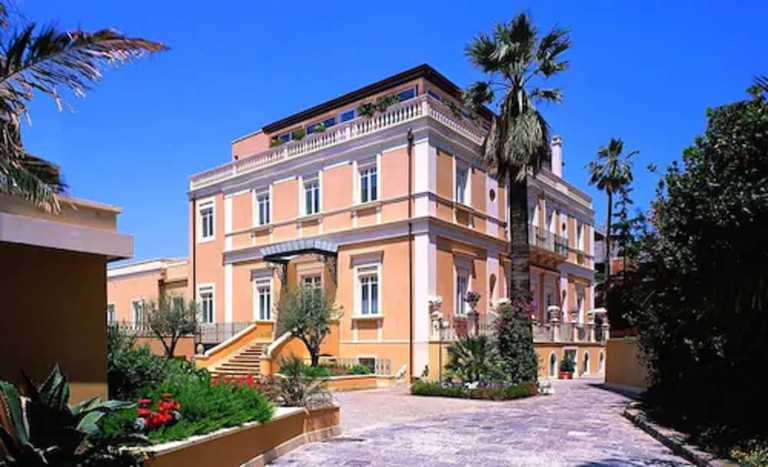 Hotel Villa del Bosco is housed in a 19th-century building and enlivened with Sicilian antiques. It’s around 4km (2.5mi) from the centre of Catania, but, with an hourly free shuttle service, that’s hardly an issue. Your day starts with a buffet breakfast on the roof garden terrace and ends at Il Canile, sampling an à la carte menu of Sicilian cuisine. 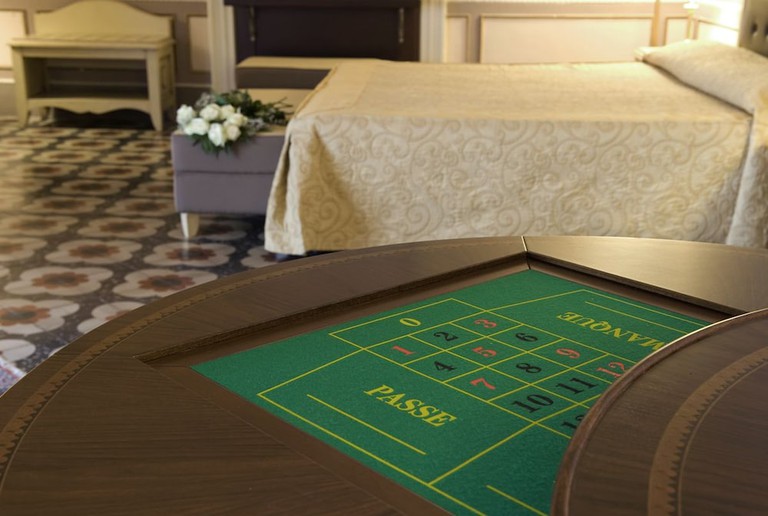 Housed in a historic building that used to belong to the local aristocracy, Manganelli Palace Hotel still carries an air of nobility. The basic rooms are just that, but the suite is where the upscale elegance truly shines, with magnificent frescoed ceilings, relief stuccoes and original flooring. It all sits just a 5-minute walk from Sant’Agata cathedral.