The Best Hotels to Book in Bologna, Italy 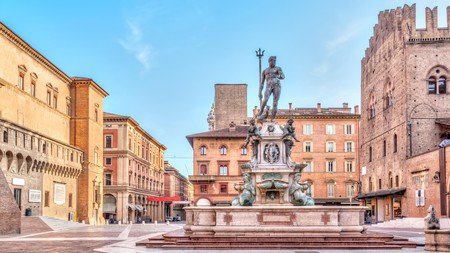 Bologna has a host of excellent hotels, from those in the middle of the city to those in quieter areas | © Sergey Dzyuba / Alamy Stock Photo

Bologna is a buzzing city full of life with some of the best sights in Italy. Its restaurants, markets and bars are exciting to explore, but after a long day of sightseeing, you’ll want to rest at a relaxing hotel. Below, we have listed some unique hotels filled with beautiful design and excellent facilities – bookable with Culture Trip. 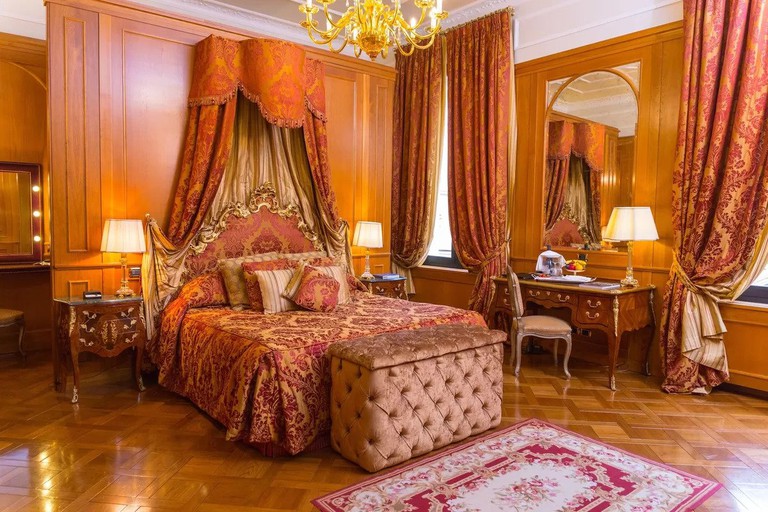 Courtesy of Grand Hotel Majestic Già Baglioni / Hotels.com
The only five-star hotel in Bologna, the Grand Hotel Majestic Già Baglioni houses elegance in every nook and cranny of the building. In a historic city, it’s of little surprise that this hotel is part museum, with a section of an old Roman road below the 18th-century building, which you can visit. As a guest of the hotel, you can also enjoy the wonderful gourmet restaurant, I Carracci, with frescoes on the ceilings and excellent food.

I Portici Hotel and Restaurant 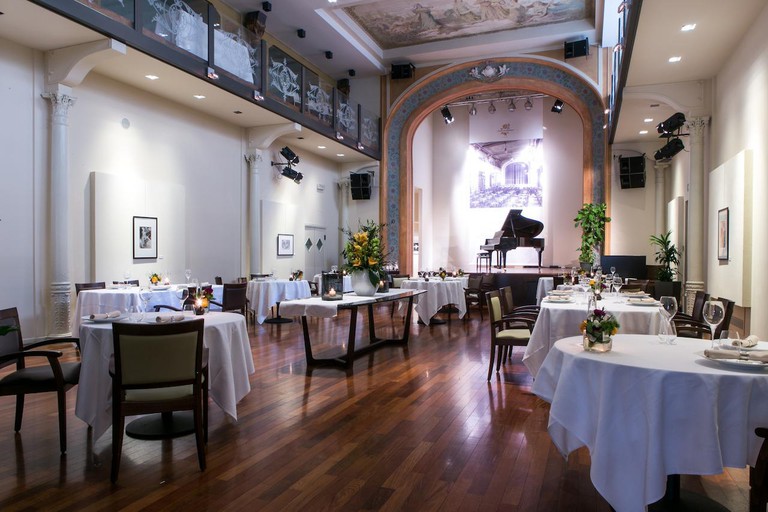 Courtesy of I Portici Hotel Bologna / Hotels.com
I Portici has a bright and clean-cut modern interior. However, its most exciting feature is its restaurant, the only Michelin-star bistro in Bologna at the time of writing, serving innovative meals with a sophisticated, arty presentation that will welcome you to discover Italian cuisine in a new way. The hotel’s central location makes it a great base from which to discover the city’s top attractions, from Teatro Anatomico (part of the oldest university in the western hemisphere) to the many basilicas and fresh produce markets. 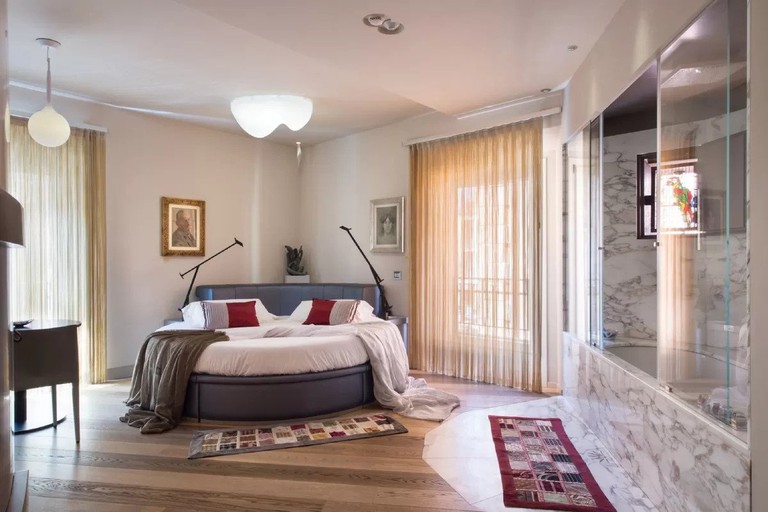 Courtesy of Art Hotel Novecento / Hotels.com
A member of Bologna Art Hotels, Art Hotel Novecento offers excellent, individually designed suites, providing for a unique and customized experience. The Viennese Secession art movement inspired the decor here, so you can expect 1930s glam and glitz all over. The hotel is within proximity to the Piazza Maggiore, which is surrounded by some of the city’s best restaurants and bars, making it an excellent option for those who want to explore what Bologna has to offer. 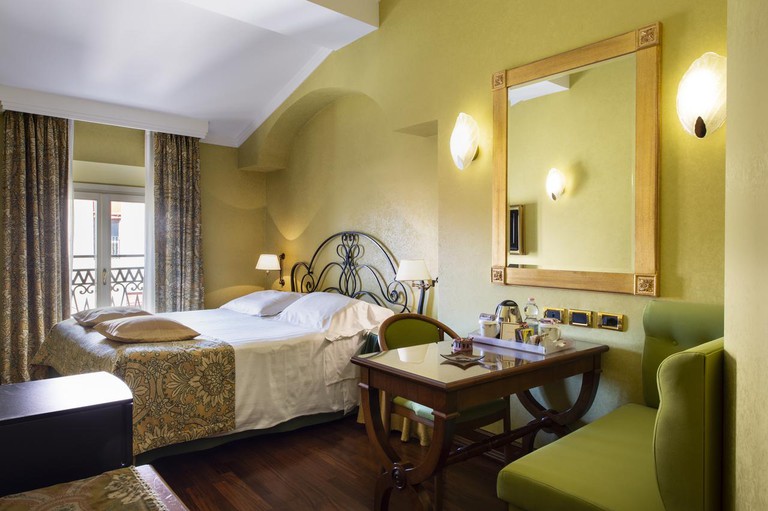 Courtesy of Art Hotel Orologio / Hotels.com
Another stylish hotel courtesy of Bologna Art Hotels, Art Hotel Orologio also lies near Piazza Maggiore, on a quiet and picturesque side street that provides a calm respite from the city’s hustle and bustle. Decorated with Asian rugs, orologi (antique clocks) and sunny-yellow walls, this hotel is bright and welcoming with comfortable rooms and stunning views of the Palazzo Comunale across the street. It serves a delicious breakfast every morning, and pets can stay in the rooms, too. 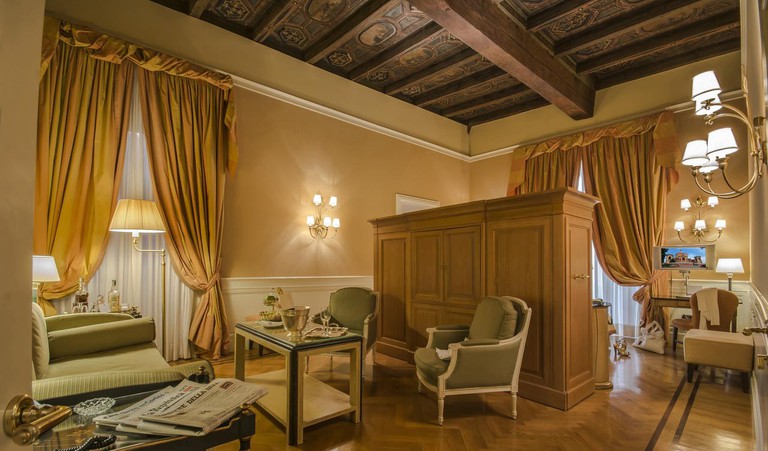 Courtesy of Hotel Corona d’Oro / Hotels.com
In a majestic 15th-century palazzo, with parts that date as far back as the 13th century, Hotel Corona d’Oro has become one of the most luxurious boutique hotels in the city centre. It has preserved the best historical elements, such as frescoes, coffered ceilings and an art deco-inspired reception. The pedestrian street means you can easily stroll to Bologna’s key sites and that it’s a quiet refuge during the day. Although all of the city’s major attractions are within walking distance, the hotel offers free bicycles to its guests. 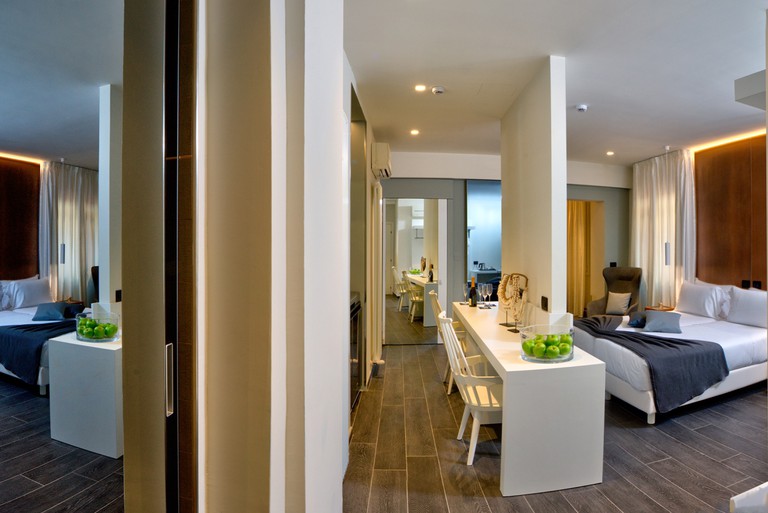 Courtesy of Hotel Metropolitan / Hotels.com
Hotel Metropolitan is yet another hotel located in a historic building on a quiet pedestrian street. However, its decor has been inspired by Eastern influences, giving it an exotic air. The modern rooms feature comfy beds and air conditioning for a good night’s sleep. It also has suites on a rooftop courtyard sprinkled with olive trees that overlook the city, plus several modern apartments that are great for larger groups. 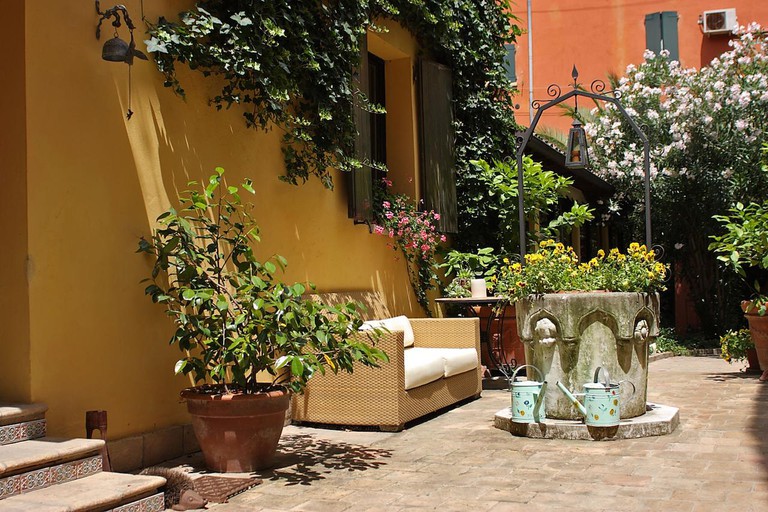 Courtesy of Hotel Porta San Mamolo / Hotels.com
Hotel Porta San Mamolo lies outside the city centre while still being in the old town, making for a calmer setting than most of the other hotels on this list. As it sits near Bologna’s biggest green area, the Giardini Margherita, you can take a morning stroll along a section of the ancient Savena canal (built in 1176). Recuperate from an intense day of sightseeing in the hotel’s courtyard, surrounded by lemon trees. 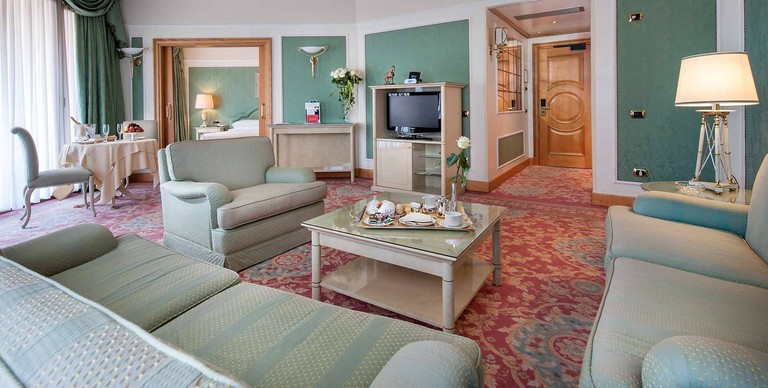 Courtesy of Royal Hotel Carlton
Royal Hotel Carlton, built in the 1970s and designed by architect Enzo Zacchiroli, is one of the most elegant, exclusive hotels in the city. Surrounded by a garden, it has 236 grand bedrooms with marble bathrooms and some with balconies. Detox your body with a hot-stone massage at the end of the day in the Monrif Spa, followed by dinner at the fine-dining restaurant, the Spoon. 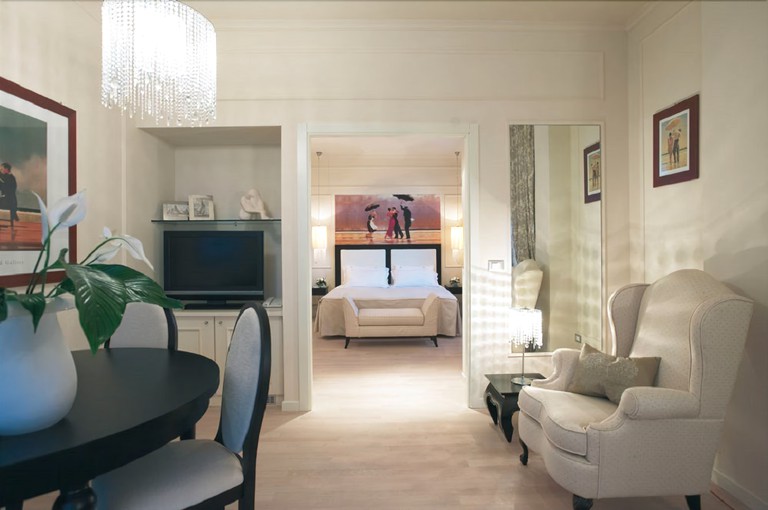 A grand hotel with the feel of a country estate, the Savoia Hotel Regency is an icon of Bologna’s hospitality scene, just minutes away from the historic heart of the city. Lavish, classically decorated rooms, an outdoor pool, landscaped gardens and the famous Garganelli Restaurant come together to create a sophisticated retreat from the hustle and bustle of the nearby city centre. For those of you wanting to arrive in style, the Savoia Hotel Regency even has a private helicopter pad. 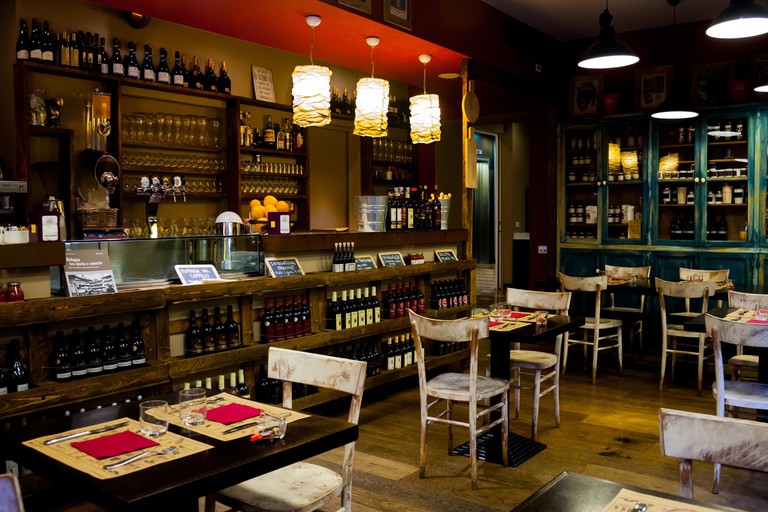 Not many hotels can boast a passion for hospitality that dates back to the 12th century, but Al Cappello Rosso is not an ordinary hotel. Following in the tradition of a tavern with guest rooms, this boutique hotel has 33 rooms and 10 apartments – each individually designed by famous artists and stage designers. The tavern below – the Osteria del Cappello – has been serving traditional Bolognese dishes since 1375, and if you fancy taking a taste of Italy home, this foodie-friendly hotel even features a gourmet shop. 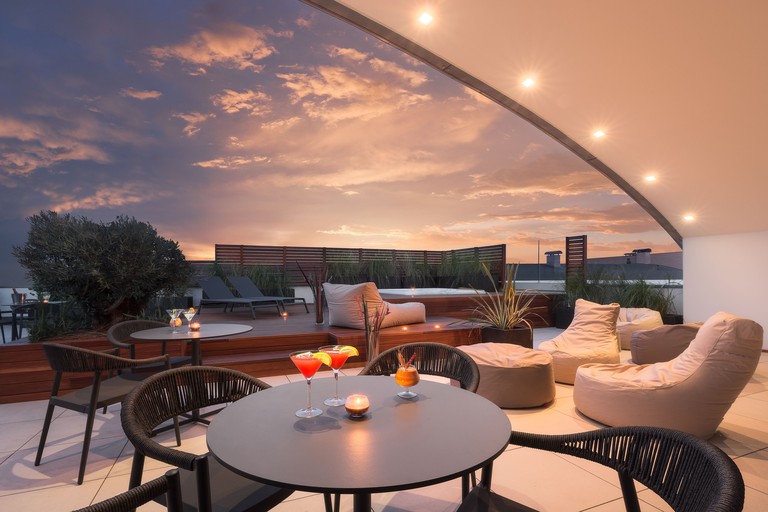 Sleek minimalism abounds at the Savhotel, near Bologna’s Fiera District. Contemporary guest rooms are airy and practical, while the hotel’s NeroArancio Restaurant serves up traditional dishes from the surrounding region, using only the freshest, local produce. However, the star of the show is found on the sixth floor – take in unmatched views of the Bologna skyline as you relax in the jacuzzi tub on the hotel’s sky-brushing rooftop terrace. 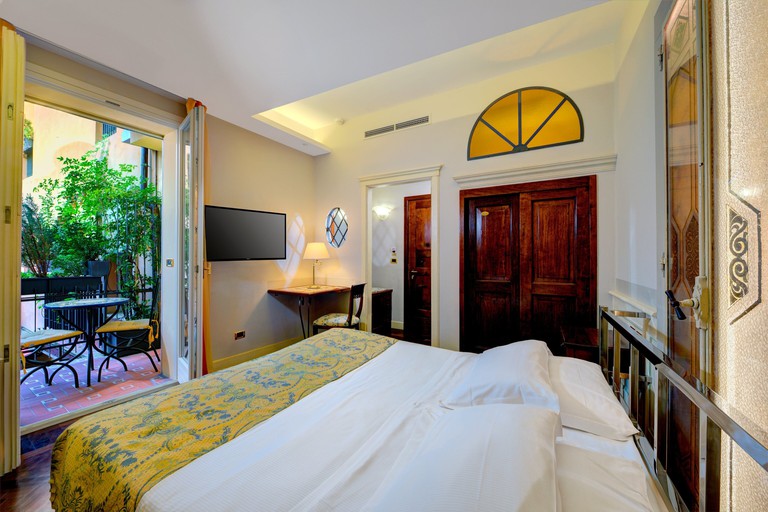 A boutique hotel nestled in the heart of the medieval centre, the Art Hotel Commercianti acts as a window into Bologna’s past. Lying inside what was a local government building in the 12th century, this charming hotel has restored the original features that make it unique. Vaulted ceilings and wooden beams create an enchanting atmosphere in the guest rooms, while the balconies overlook the gothic stained-glass windows of the historic Basilica di San Petronio. 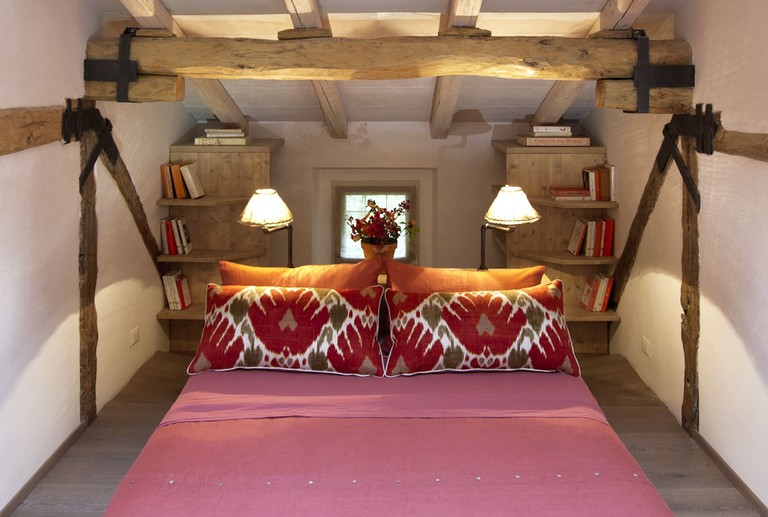 Between the city and the countryside is a true Bolognese home from home. The tiny Casa Fluò Relais offers a truly authentic local experience, where rustic chic lends charm to the four guest rooms. Start each day with a regional feast of home-made cakes, freshly baked bread and local produce from the hotel’s farm. Just opposite the guest house is the owner’s second venture – Fienile Fluò – a charming restaurant and theatre space, welcoming neighbours and visitors alike and delivering a real connection to local life and culture.

Looking for more? We’ve compiled the must-visit attractions in Bologna, including the best museums. And don’t miss the city’s best restaurants.