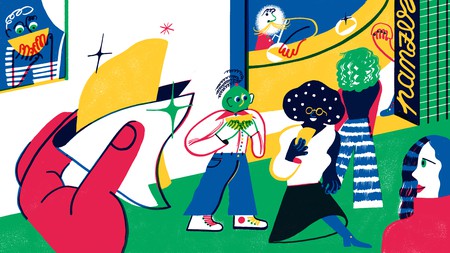 Trust the Italians to do street food their way – dishes here date back centuries and tell the stories of individual regions. So tuck into our guide to the tastiest dishes to eat on the go from all over Italy.

Pasta and pizza? Not necessarily. The best Italian food is firmly rooted in regional cuisine, and there’s no better way to see that than through its street food, which has been fuelling workers for centuries. Here, you’ll find shepherd’s snacks in mountain regions, Renaissance-era sandwiches in university towns, and snacks that typify cucina povera – the food of the poor, who could only afford intestines instead of meat, or poured honey on their pies to turn a main into a meal. Try this regional tasting menu for a truly authentic Italian eating experience.

Your clue that this is the best kind of street food? You’ll see people ordering them by the dozen. They’re dead ringers for mini kebabs, but don’t let that fool you – real arrosticini, or shepherd’s street food, are chunks of hand-cut lamb or mutton on a long, skewer-like stick, grilled on a brazier and wrapped in foil so you don’t ruin your clothes with the dribbles. Oh, and the reason they taste so juicy? It’s down to the little globules of fat skewered between each piece of meat. Gnaw directly off the sticks, instead of using your fingers, if you want to look like a local. 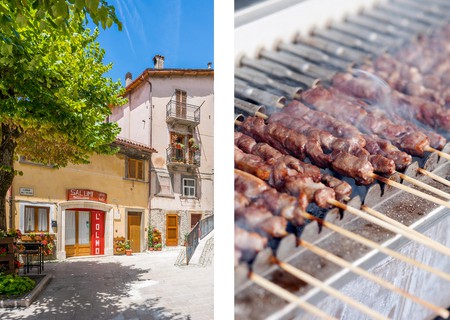 Sardinians are famously sweet-toothed, and yet their diet is said to be one of the best in the Med. The reason? Their prodigious use of honey instead of sugar, plus rigorously natural ingredients. That’s what’s behind the bite-sized, sweet-savoury dessert of seada: soured pecorino with lemon peel wrapped in semolina puff pastry, deep-fried in olive oil or lard, before being coated in honey or, occasionally, salt. Thought to date back to Roman times – when it was served as a main meal for impoverished islanders in the sheep-herding mountain areas – today, it’s the snack of choice when you need an energy pick-me-up.

The port city of Genoa has ruled the street-food scene for centuries. Today, amid Med-side holes-in-the-wall, one dish reigns supreme – farinata, a kind of thick pancake made of chickpeas, baked in a giant disc and sliced to order. For Ligurians it’s as ubiquitous as pesto – some swear the Romans invented it, others reckon it dates back to the siege on Troy. There’s also a theory the Genoese coined it in 1284 after a battle against Pisa – though that’s probably because the Pisans swear that, actually, it’s theirs. Whoever’s it is, it’s delicious – enjoy it plain or smear some soft stracchino cheese on top. 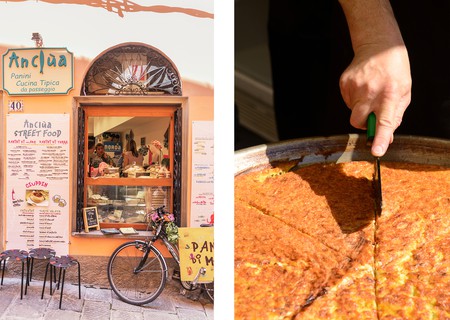 Forget arancini, Sicily’s most exciting street food is pani câ mèusa, and Palermo is its spiritual home. Sure, it’s not to everyone’s taste – while it sounds pretty to English ears, that’s actually Sicilian dialect for “bread with spleen” – it’s a true taste of the chaotic capital, especially when bought from a meusaro, or street vendor, in the Ballarò or Vucciria markets. Veal lung and spleen are boiled in salt water, fried in lard and put in a soft bread roll; add a squeeze of lemon, “marry” it with a spoonful of salted ricotta or a slice of caciocavallo cheese, and you have Palermo’s century-long snack of choice.

Legend says we may have an anonymous housewife, thriftily using up leftovers, to thank for the panzerotto – a kind of mini fried calzone or turnover, normally stuffed with tomato and mozzarella. Puffed up into chubby little half-moons by the frying process, it’s thought they date back to the 1600s, when the tomato arrived in Italy – and though both Naples and Bari claim to be their birthplace, Puglia has very much won the battle over the past 50 years. Do as the locals do and eat it on the run, but watch out for the juice dripping out – tomato-stained clothes are not very bella figura. 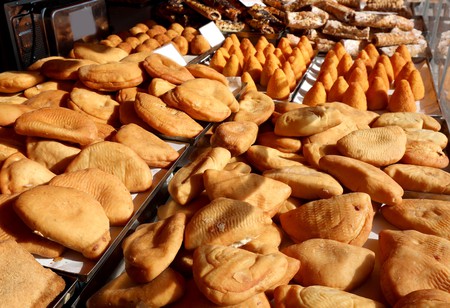 Panzerotto is a twist on the classic Italian combo of cheese, tomato and dough | © FC_Italy / Alamy Stock Photo

Visit university town Urbino and wherever you see students – outside cafes, in the squares, sprawled on the grass overlooking the grand Palazzo Ducale – you’ll see them eating what look like semicircular flatbreads. Flaky, warm and just the right kind of greasy, this is the crescia sfogliata, Urbino’s Renaissance-era take on student-friendly fast food. Vegetarians, beware – that slight slick of moisture is down to the lard in the pastry – but for everyone else, it’s what turns an over-thick pancake into something tastier. You can fill it with practically anything, but traditional flavours include cheese with prosciutto or chard.

The Italian capital has a long history of street food, from pizza by the slice to suppli – rice balls filled with ragù and mozzarella. In 2008, though, inspired by the global food-truck scene, pizza-maker Stefano Callegari invented the trapizzino – a cross between Italy’s overstuffed tramezzino sandwiches and pizza. A pocket of pre-baked pizza dough is filled with full-on Roman combinations: oxtail stew, stuffed artichokes and tongue in parsley sauce. It’s such a hit that he’s expanded across Italy and beyond. This isn’t fast food, though – Callegari says that the leavening process and slow-cooked fillings means it takes two days to make a batch of trapizzini. 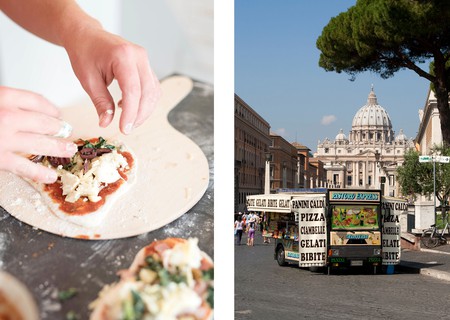 In medieval times, the German-speaking Walser population moved south from Switzerland to the Alps of northern Italy. They brought with them wafer-thin bread slices that are cooked on iron plates on top of a fire, rather than in the oven. Regional variations abound – around Quincinetto and the Valle d’Aosta, you’ll find shavings of fermented ricotta and sauerkraut on a crunchy cornflour base; further east, in Valsesia, they’re made with buckwheat, slicked in lard, and stuffed with pancetta and butter, or local toma cheese. Think of it as an alpine pizza crust – only one you can double over as a sandwich.

Italians love their olives, but in Ascoli Piceno they take this love one step further, stuffing them with a kind of meaty pâté, then rolling them in breadcrumbs and deep-frying. You’ll find these stretching from the southern part of Le Marche to northern Abruzzo, but nowhere do they taste quite as they do in their hometown, where they’re served as starters, side dishes and in cones in the street. Legend has it that they were invented for the local nobility, as a way of using up a surfeit of meat, but today they’re beloved by the masses, who pile into town every August for the Ascoliva Festival. 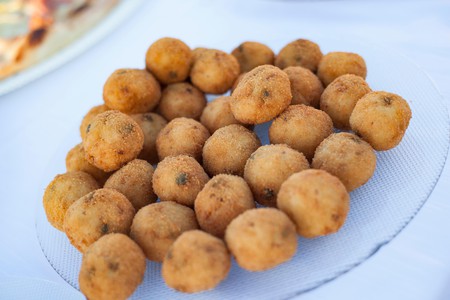 Connect with the culture and beauty of Italy and begin planning your trip by visiting italia.it