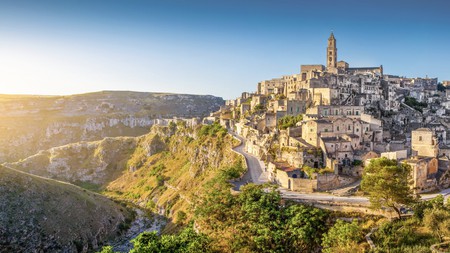 Step into incomparable history at Sassi di Matera, an extraordinary Unesco World Heritage site comprising atmospheric caves that have been continuously inhabited since the Palaeolithic period. From the empty dwellings of the Sasso Barisano district – home to carved, underground churches with remnants of sacred frescoes – to Sasso Caveoso’s atmospheric renovated cave restaurants and hotels, there is much to absorb. Culture Trip’s guide to the area will get you underway.

Explore the caves of Matera and many more unforgettable destinations – including Naples, the Amalfi Coast and various parts of Puglia – with Culture Trip’s unique 10-day southern Italy adventure, led by our Local Insider.

History of the ancient cave dwellings of Sassi di Matera

Archaeological investigations in Sassi show it to be one of the oldest continuously inhabited settlements in the world. Findings date to the Neolithic and Palaeolithic periods – with evidence of human life from 7000BCE.

Over the millennia, inhabitants gradually dug deeper into the limestone’s malleable rock to form homes, creating the facades of the houses you’ll see today. Some caves house underground churches with hand-sculpted arches, pillars and domes. The sacred remains of hand-painted frescoes are captivating.

The 1950s and 1960s saw a big change in Sassi when a government project moved residents out of the caves and into nearby Matera. This was in response to the area’s poor living conditions, poverty and high death rates from diseases like malaria.

Years later, those that saw the value of Sassi worked to regenerate and repopulate the area. Gradually, as the outside world discovered its beauty and tourism thrived, more and more caves were restored into homes, hotels, restaurants, cafes and museums – all contributing to the unparallelled site you’ll see today. Palaeolithic handiwork now meshes with unobtrusive modernity in a way that’s unique to this extraordinary corner of the world. 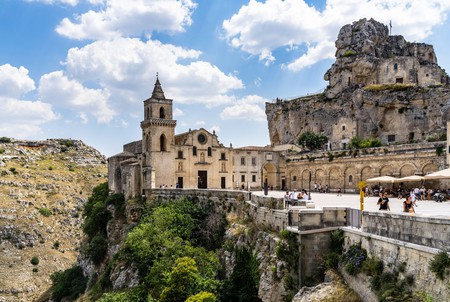 How best to explore the caves of Sassi di Matera

Put on your comfiest shoes and admire the caves up close, as you wind through alleys, under archways, up staircases and along paths that cross stacked-up cave roofs. Stop at squares like Piazza Duomo and stumble across panoramic viewpoints overlooking the sprawling town and landscape. Stay the night and you’ll be rewarded with a twinkling, fairytale atmosphere as the streets illuminate.

For a thorough history lesson, join a group or private walking tour – some are headed by locals – or take a seat in a tuk-tuk. For once-in-a-lifetime views, book a romantic hot air balloon ride. 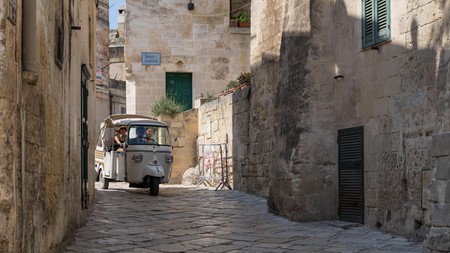 What’s near the caves of Sassi di Matera?

Get inside Sassi with an overnight stay in a modern, converted cave – you can feel the history and still use wifi. Book one with a terrace for morning coffee with a view. Make sure you explore the remarkable buildings in the Park of the Rupestrian Churches – seek out the rock-carved Church of Santa Maria de Idris and the Convicinio di Sant’ Antonio complex.

See how people once lived in Casa Grotta di Vico Solitario, a reconstruction of a typical 18th-century cave dwelling, and find the Museum of Contemporary Sculpture in an atmospheric 16th-century cave palazzo.

Lovers of nature and hiking can’t leave without exploring the trails of the surrounding protected area, Murgia National Park. Marvel at the ravine and the spectacular viewpoint of Belvedere di Murgia Timone.

Finally, wind down with a visit to a low-lit cave restaurant for Matera delicacies such as crapiata bean stew and Lucania sausage with local wine. 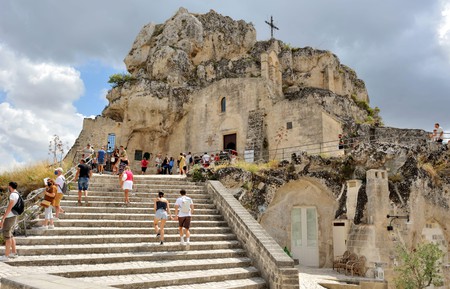