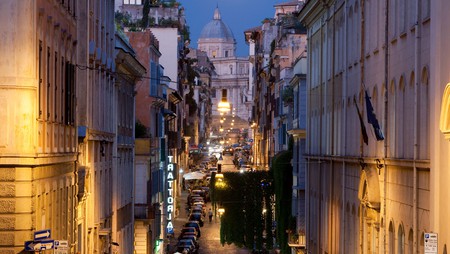 Architect Francesca Giorgia Cerulli’s Sacripante Gallery is an abandoned Roman convent transformed into a special exhibition space that features vintage furniture and a cocktail bar reminiscent of an American speakeasy.

On Via Panisperna, in Rome’s ancient Monti neighbourhood, is a gallery called Sacripante. Its name derived from the cardinal who commissioned the building’s name when it was a convent in the 18th century. The name of Via Panisperna comes from a famous chemist and physician, and it was on this same street that Enrico Fermi discovered the neutron in 1934, adding to its iconic history.

Architect Francesca Giorgia Cerulli, along with her husband and sister, have created a completely different type of legacy with their gallery space. As they juxtapose the bones of this centuries-old Roman convent with pieces from the comparatively new Lowbrow art movement, they create a unique space that does not only show art, but also encapsulates Roman culture.

Giorgia Cerulli explains the alternative meaning of the gallery’s name on archello.com, as it is more than just the name of an old cardinal: “The word Sacripante means also an exclamation of amazement, astonishment… and that is what we feel when we discover the spaces of this place.” Sacripante’s interior architecture intentionally differs from the trend of white-cube, white-walled contemporary art galleries. Its industrial, rough cement walls and baroque vintage furniture are active accompaniments to the exhibitions of contemporary art. The furniture that adds elements of comfort to the gallery is also for sale, to foster the constant development and renewal of the space.

The focal point of the space that adds function to the beauty is the pharmacy-inspired and fully operational cocktail bar displaying a variety of vintage bottles and glasses. Another inspiration for the bar is the American speakeasy of the Prohibition era, with the absence of a drink menu and the feel of a private home. Giorgia Cerulli’s husband, a restaurant owner and event planner, aided in the creation of the bar space.