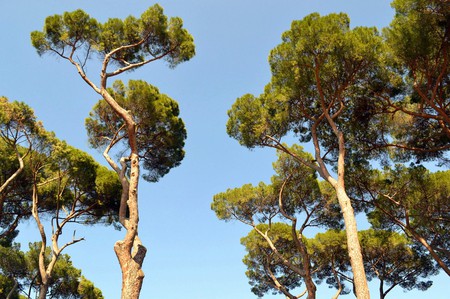 Rome is an unexpectedly verdant capital, and that’s not just because of the ivy that dresses many of its ochre buildings or the vibrant bougainvilleas that add a pop of color to small alleyways each spring — the city is home to countless villas, many of which have expansive parks and gardens on their grounds, making for an enjoyable stroll past Roman pine trees, ornate fountains and history.

The most famous park in Rome, Villa Borghese is located in the heart of the city. Villa Borghese encompasses Galleria Borghese, one of the greatest art collections in the city, and homes numerous lakes and gardens. Cardinal Scipione purchased the land in 1612 and began to landscape the area. It was intended to house the Borghese family’s art collection and be a suburban villa providing pleasure, entertainment and an escape from the city center. It has many statues and fountains, and is now home to the city’s Zoo, National Etruscan Museum and a rendition of the Shakespeare Globe Theater. Within Villa Borghese you’ll also find the Pincio Terrace overlooking Piazza del Popolo and providing one of the best views of the city.

Villa Doria Pamphili is the city’s largest park and was designed around 1650 for Prince Camillo Pamphili, nephew of Pope Innocent X. When the Pamphili family died with no male heir in the 18th century, the villa was passed on to Prince Giovanni Andrea IV Doria, thus incorporating the two names. Villa was intended to be a suburban villa and has many ornamental decorations, including a manicured Renaissance-style garden and an impressive Baroque fountain of Cupid. The park has two halves, now joined by a bridge, and offers many opportunities for bird-watching and jogging.

Villa Torlonia is one of the more recently designed parks in the city. The villa itself was constructed in the early 19th century. Villa Torlonia is most famous for being the private resident of Benito Mussolini, Italy’s fascist dictator, during the years 1925-43. The gardens are filled with palm trees, featuring a reflecting pool and a theater. The park has several notable museums including the Casina delle Civette, a fantastical little cottage that has Art Nouveau stained-glass windows.

Villa Ada is a park beloved by the Romans, who spend many weekends here running, having picnics and chatting with friends. It is second in size to Villa Doria Pamphili and contains two large lakes — one of which hosts the Villa Ada Incontra Il Mondo concert series, bringing international artists to play on a peninsula in the summer months. The Villa was commissioned by the first king of Italy, Vittorio Emanuele II, and was the residence of the royal family from 1872-78 and from 1904 until the fall of the monarchy in 1946. It is now the seat of the Egyptian Embassy in Rome.