Rome Is Really Sad About Their Christmas Tree 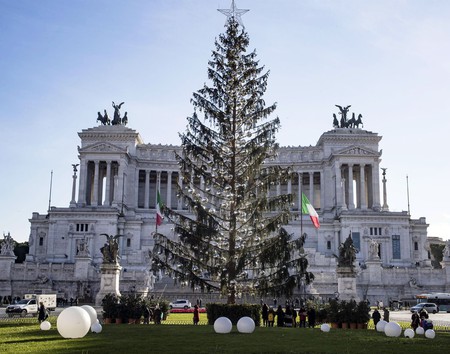 Standing tall, if not proud, in one of the capital’s busiest squares, Rome’s Christmas tree is attracting attention for all the wrong reasons. The 70-foot fir has been mocked by residents and visitors alike for its drooping, threadbare branches and its overall lacklustre appearance. The tree is in such a sorry state that it has even earned the nickname ‘Spelacchio’, which, roughly translated, means mangy or bald.

The giant tree, erected in Piazza Venezia earlier this month, came from the Val di Fiemme area in Trentino in Italy’s Alpine north. However, it began dropping needles at an alarming rate and, with a week to go until Christmas, local government officially declared it dead.

In fact, as Rome’s Environment Department explained, the fir was already dead – cut Christmas trees don’t have roots and are simply erected, not replanted.

A spokesperson for the area that supplied the tree, however, was keen to point out that when the tree left the Val di Fiemme area it was in excellent condition. They told newspaper La Repubblica that ‘despite being in fact dead, trees can remain lush for a month and a half or two months’.

‘What happened,’ the expert continued, ‘is that the operation of untying the plant once it arrived in Rome wasn’t carried out correctly. This is an extremely delicate procedure because there’s a risk of breaking the branches.’

They also produced photos of the tree being felled and then tied to the back of a lorry on its way to Rome – looking lush, green and in much better health than it is now. 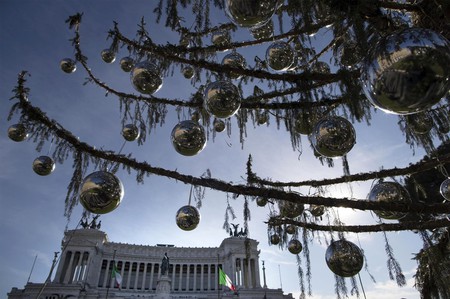 Mandatory Credit: Photo by MASSIMO PERCOSSI/EPA-EFE/REX/Shutterstock (9297906c) A close up of branches of Rome's official Christmas tree in Rome, Italy, 19 December 2017. Rome's official Christmas tree is losing so many needles so fast it has become a jolly joke for city residents. The 21-meter high tree, which was lit up on 08 December, started shedding needles badly as soon as it was hoisted in place in the middle of bustling Rome's main square, Piazza Venezia. Romans have dubbed the tree The Mangy One. They're also pointing Rome's mayor about the tree, which costs 48,000 euros to transport from South Tyrol, an Italian Alpine region. Rome's Christmas tree lost lots of needles, Italy - 19 Dec 2017

Spelacchio’s sparse condition has caused controversy in the capital, with some Romans comparing it to a giant toilet brush and newspaper Il Messaggero calling it a national embarrassment. The tree even has its own Twitter account with over 5,000 followers.

“The Christmas tree of Piazza Venezia is the sad mirror of a dying city,” said Rome-native Matteo Memmi. Another resident, Giacomo Gabrielli, compared it to a terminally ill patient, explaining, “It makes me feel compassion, pity and hopelessness – not exactly what you would expect from a Christmas tree.”

Italians have been quick not just to ridicule poor Spelacchio but also to point the finger at mayor Virginia Raggi, who authorised the €48,000 transportation cost to bring the tree to the capital – more than three times the fee for last year’s tree.

“At the next election, we may as well elect the Grinch,” said local Alessandro Gavazzi, apparently criticising Raggi’s lack of festive spirit.

This is not the first time Rome’s Christmas tree has caused controversy. Last year, the capital’s centrepiece was dubbed the ‘austerity tree’ and branded the ‘ugliest tree in the world’.