The History of Ravioli: A Timeless Italian Tradition 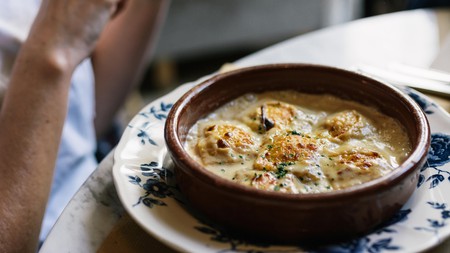 Ravioli, a dish of stuffed pasta, is a humble but important dish in Italian cooking traditions. Humble in its ingredients of cheese and meat or vegetables found in a particular region, and special in that it is often prepared with loved ones for the feast table at Christmastime or for a family celebration.

Italian food historian Oretta Zanini De Vita writes in her 2009 book, Encyclopedia of Pasta, that what was first a dish enjoyed by high society soon become a favourite of farmworkers. “Stuffed pasta first appears in Italian gastronomy in the 1500s, especially in the north, in Lombardy at the courts of aristocrats in Milan and Mantua. Over time, certain preparations became popular and trickled down to humbler classes who served them on feast days. Thus, stuffed pastas passed from the Italian court to the Italian regional kitchen.”

Ravioli from the 16th century

For special occasions, Italians in the north still turn back to traditional fillings for ravioli, such as pumpkin and almond biscuits, ravioli di zucca e amaretti. Personal chef Giulia Ridolfi first remembers tasting this dish on a family trip in Modena 20 years ago. “It evolved into a typical Christmas Eve dish, as the consumption of meat was not traditionally allowed on the day before Christmas (in Italy, we call this mangiare di magro).” 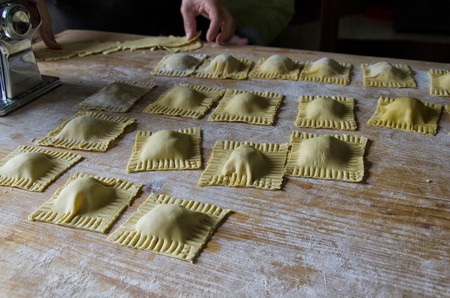 Today, Giulia teaches students how to make it as part of a pasta-making class in her home in a leafy suburb of Johannesburg, South Africa. “I decided to include this dish, because I love it and it reminds me of my homeland and my childhood.”

Not easily found in restaurants abroad, the filling also includes parmesan, nutmeg and pears in a mustard glaze, mostarda di frutta; Giulia’s version of this ravioli is served with a balsamic vinegar glaze, but it is also commonly served with sage butter. Try this recipe for ravioli with pumpkin and almond biscuits.

Ravioli for a feast, from north to south

Lucio Galletto, an Italian restaurateur based in Sydney, Australia, says giving gifts at Christmas is just a “distraction” from the most important part of the day: a large meal with the family. Lucio grew up in Liguria in north-west Italy. “The pasta we liked on feast days was ravioli, stuffed with meat and covered with a rich ragù (meat sauce) and parmesan,” says Lucio in the 2007 book, Soffritto: A Return to Italy, written by David Dale.

Lucio says cooks in Italy rely on memory when preparing food, “Most cooks from the region (Lunigiana) don’t use written recipes. They simply know what goes with what, because they grew up watching their parents catch, harvest and prepare food in all its forms.” Try this recipe for ravioli with a meat and cheese filling.

At the southern tip of Italy, on the Mediterranean island of Sicily, the tradition of gathering with loved ones to make pasta parcels filled with delicious ingredients before a celebration is the same, except the ingredients are different. Luigi Vivarelli, born in Palermo but working in the tourism industry in Tindari, a small village known for its Greek and Roman ruins, says he typically grew up eating ravioli with a filling of grouper fish and mint and a simple tomato sauce, ravioli cernia e menta, during special family celebrations and at Christmastime. 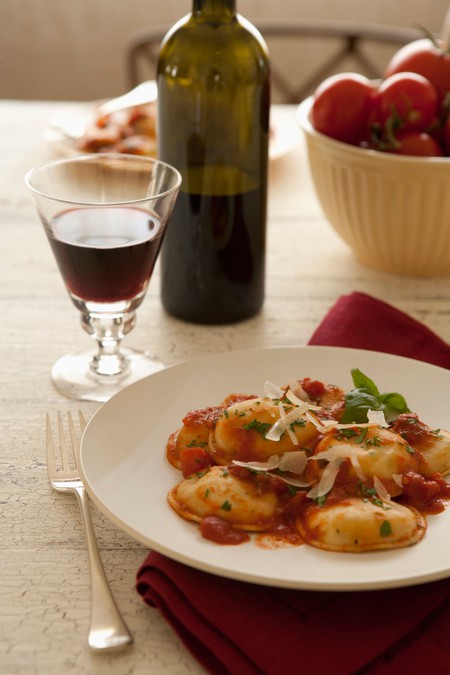 The fillings in ravioli change depending upon the region | © Tetra Images, LLC / Alamy Stock Photo

Luigi also offers Sicilian cooking classes to visitors and favours ravioli filled with spinach and ricotta cheese, served with butter, fresh sage, parmesan cheese and black pepper: ravioli burro e salvia. “I love cooking this dish just for the scent of sage that surrounds the whole kitchen. A Mediterranean scent, which reminds me so much of my grandmother who used to prepare these recipes with the aromatic herbs she cultivated in the garden.” Try this recipe for spinach and ricotta ravioli with sage butter.

Today, Italians around the world still practise the tradition of making ravioli for a feast, but there is flexibility in terms of creativity, with the ingredients used for the filling often depending on what’s available locally. For American chef Marc Vetri, who trained in Italy, the tradition of making pasta is one of innovation. “The union of flour and water has taken on hundreds of forms out of necessity, creativity and, in some cases, pure whimsy. To this day, the history of Italian pasta-making has been a never-ending quest to fully realise what can be achieved in a plate of pasta,” he writes in his 2015 book, Mastering Pasta: The Art and Practice of Handmade Pasta, Gnocchi and Risotto, with David Joachim.

Contemporary traditions of ravioli-making around the world are not about replicating the exact recipe from back home, but being inspired by the regional flavour combinations and using ingredients found locally. 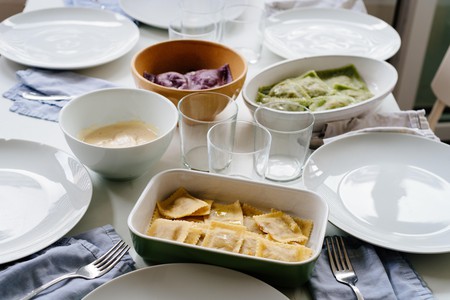 Back in Johannesburg, aside from bringing ravioli recipes from the Renaissance era to life, Giulia is able to practice this culinary tradition in new ways. One of the first dishes she made for friends when she first arrived in South Africa was a Sicilian-inspired ravioli made with ingredients she could find locally: sea bass and potato filling, with a sauce of eggplants and cherry tomatoes. She says choosing local ingredients to respect their seasonal availability is a deeply rooted approach. “All these small realities together form the bigger Italian culinary scene, but they are not separate from one another. There is a continuous gastronomical exchange. I often find myself cooking Tuscan, Apulian, Sicilian, Ligurian dishes, I just love it!” Try this recipe for Giulia’s ravioli siciliana with sea bass filling.