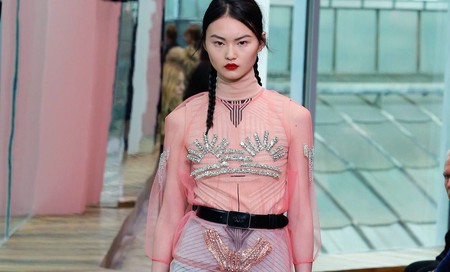 Staged in the Fondazione Prada Osservatorio, Prada’s 2018 Resort Collection offered a master guide in how to convert romantic notions of feminine mystique into contemporary cool.

Feminism has been ‘in’ for a few collections now. It was über evident at the likes of Maria Grazia Chiuri’s first Dior show, which saw slogan tees emblazoned with assertions such as ‘We Are All Feminists’ (would that it were true); or in a new style of maximalist power dressing, as propagated by the likes of Marques’Almeida, Mulberry and Mary Katrantzou.

But Prada has also pursued a savvier style of ‘girl power’, one in which the tropes of womenswear are dug into, and wrung afresh again and again. Prada’s Resort Collection 2018 was no exception. Within the light and airy industrial settings of the Galleria Vittorio Emanuele II – located five floors above the original Prada shop – sheer pastel silks were imagined in the shape of tuliped skirts and scalloped hems. Layers of thin pleats, frills and embellished detail were offered in a distinctly Prada-esque medley – one in which these superbly delicate materials were paired with sporty neoprene; a thoroughly modern princess look.

‘I really have in mind what this place means in history and also I really wanted to do a modernist show, so I started looking at the past.’ Miuccia Prada told WWD. ‘Because it’s modernist and not at all decadent, but there is the beauty and charm of that period, the feminine eccentricity and sensuality of that period.’

The hybrid of Prada’s decadent past woven with feminist modernity was also visible in the pairing of violet knee socks, pointed metallic flats and slick black hoodies, offered with fluted sleeves and tunics with ornate prints, which reworked the label’s logo into a statement graphic, paired with chunky trainers. Elsewhere, woollen coats in grey and black were offered with wide, or non-existent lapels, and belted at the waist. Here headbands with a single feather again offered a new juxtaposition among more classic designs.

A confrontation between real and manufactured moments. #PradaResort18 #Osservatorio

There was a time when sporting trainers and bountiful dresses felt more London noughties grunge (looking at you, Lily Allen) than Italian modernist chic. But there you go, that’s the beauty of Miuccia Prada’s eye – you’re invited to look at something familiar for the first time, and it always looks good.