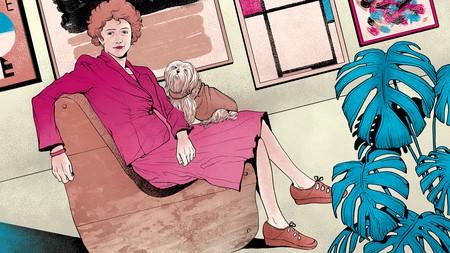 It was love at first sight for Peggy Guggenheim and Venice. The floating city captured the American heiress’s heart from a young age and she was drawn back to the ancient port throughout her life, eventually adopting the Italian island as her home in 1948. Venice crowned her an honorary citizen in 1962, and 2019 marks the 70th anniversary of her buying and moving into her famous Palazzo, where her collection of art can still be seen today. She gave herself to the city, and in turn it shaped the woman she would become: the last dogaressa.

Guggenheim’s life was one charted by water. Her father drowned on the Titanic in 1912, a death that – though traumatic – gave her freedom to live life on her own terms. Rather than fearing the wild waters of the oceans, Guggenheim chose to live in a city that literally bobbed atop the waves. She made the voyage to Europe, undeterred by her father’s tragic fate, and settled in a city that was frequently drowned in winter and reborn as the waters subsided come spring. She not only lived in the city but lived in its calles; she found joy in floating down its many canals. Water, despite its darkness, became a thing that uplifted her life: “I adore floating to such an extent,” she wrote to Djuna Barnes in 1956. “I can’t think of anything as nice.” 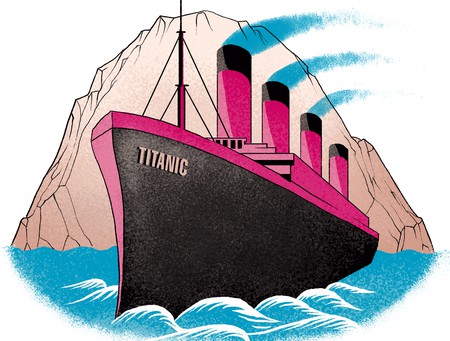 She first came to Venice on her honeymoon with Laurence Vail at the tender age of twenty-six. The couple rented a room in an old-fashioned hotel on – what was then – “the shabby end” of the Riva deli Schiavoni. To complete the “bohemian dolce vita” experience, Guggenheim also paid for an artisan studio where Laurence could write. She admired Vail’s familiarity with the city – he had visited Venice with his father often as a child and according to Guggenheim, “knew every stone, every church, every painting”. It was a knowledge she soon sought to replicate, taking great joy in long wanderings all over the city. It would later be said that she knew the name of every bridge. Yet however happy the visit it would be one that Guggenheim would write up as a cautionary tale to newlyweds: “It is always assumed that Venice is the ideal place for a honeymoon,” she wrote in her autobiography Out of This Century: Confessions of an Art Addict, “This is a grave error. To live in Venice or even to visit it means that you fall in love with the city itself. There is nothing left over in your heart for anyone else.”

And so the spell was cast. “She fell in love with the city immediately and knew she wanted to come back here one day,” says Karole Vail, Guggenheim’s granddaughter and now director of the Peggy Guggenheim Collection. Venice would remain special to Guggenheim from that point on. “I have never been in a city that gave me the same sense of freedom as Venice,” she wrote. “Venice is not only the city of freedom and fantasy but it is the city of pleasure and happiness.” Her honeymoon destination was in fact where she returned when her marriage was in trouble; the city offered a refuge, a shelter from reality, a place she could live “unhampered by any influence and criticism”. Visiting alone this time round she found she could “enjoy Venice to my entire delight.” 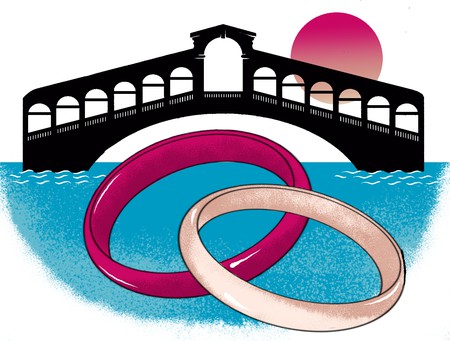 In 1947 she visited once more and wrote to the art critic Clement Greenberg, “I am where I belong, if anyone belongs anywhere nowadays.” The same year she received an invitation to take over the unused Greek pavilion for the 1948 Venice Biennale in the wake of the Second World War. The offer felt like a sign: the city had space for her, it wanted her to make a grand entrance. On the map of the Biennale when she saw her name among the other pavilions her arrival felt consecrated: “I felt as though I were a new European country.” Guggenheim’s display secured her a new reputation in the world of modern art, but it was also an event that established her own sense of belonging. The Biennale was a new beginning, a moment at which she saw the potential for a real life on the island, the moment she realised that she didn’t have to leave.

“I don’t think she chose [Venice] because of the art world or the art scene, though it was undeniably important that the Biennale is here.” Mary Dearborn, author of Mistress of Modernism observes. “I think she did know, however, that a lot of people go through Venice. She knew she would see these people when they passed through…I think that was very smart of her.”

At first Guggenheim rented the top-floor apartment of the old Palazzo Barbaro. It was here she first began to host a stream of friends, including Roland Penrose and Lee Miller, who went on to write that Guggenheim’s Biennale Pavillon was “the most sensational” in the August edition of British Vogue. The next year Guggenheim purchased the Palazzo Venier dei Leoni. Covered in mud and graffiti, it was a building that had suffered greatly during the occupation, commandeered as a military billet and left in a state of disrepair. Nicknamed the “unfinished” palazzo it was a building that, like Venice, Guggenheim would come to view with a kind of kinship: its difference made it unique.

The Palazzo also had the advantage of being in Dorsoduro, the slip of island just over the accademia bridge that remains both at the heart, and apart, from the centre. “I think she loved being out of the hustle and bustle of San Marco yet still accessible” notes Dearborn. “Her collection has the feel of a quiet backwater in a great city. You even feel that now, with all the tourists. It’s like an oasis, where you can also cleanse your palate by seeing some modern art after all those paintings of Annunciations.” There’s a joy to how Guggenheim’s style clashes with the ancient world: “The city sets off her collection brilliantly”. Guggenheim herself grew to relish this contrast. Although she had initially set her heart on a completed palazzo, she grew to love the one-storey building. She became proud of its distinctly “un-Venetian” look, and took gleeful delight in subverting the expectations of her guests with her unique interiors. Instead of a traditional Murano chandelier, she set up the bright gaudy cut-outs of a Calder mobile, a sight that horrified the Princess Pignatelli when she came to visit and dismissed the art as a construction that “might have come out of a garbage pail”. 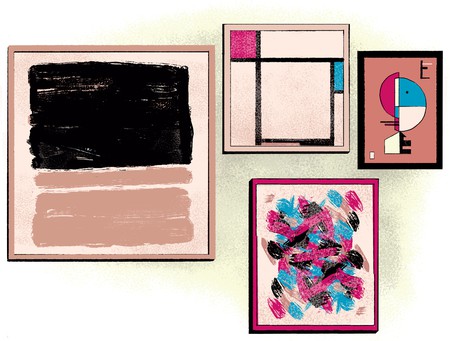 Though Guggenheim found herself shunned by the high Venice society the exile had a galvanising effect. “I think she turned that to her advantage” says Dearborn, “she had her own social life.” She didn’t need the establishment to fit in. Peggy, like Venice, became a port, always the happy host to “lots of glamorous people passing through”. As Dearborn notes: “You don’t care about being shunned by Society when you have De Chirico cooking dinner for you whenever he comes to town as Peggy did.” Guggenheim made her own society, just as she made her own art gallery; within Venice she found fertile ground to create a world all of her own.

When she asked the patron of the Café Angelo where she could meet modern artists in the city his reply was to go to the “other Angelo restaurant in San Marco, and ask for Vedova”. Guggenheim wrote the name on a matchbox and ventured out. She found him with Giuseppe Santomaso, and though the three instantly sparked a friendship, she found her Italian unprepared for the insularities of Venetian dialect which both artists spoke almost exclusively: “I spent painful hours because I could not understand even a word of what they said.” Guggenheim adapted: soon she learnt to speak the language of the Venetians. “The attention she gave the local talent was key,” says Gražina Subelytė, a curator at the Peggy Guggenheim Collection, “she was one of these artists’ earliest supporters”. Thanks to her efforts a young and then unknown Tancredi would soon live in Guggenheim’s basement, driving her cleaners mad by leaving painted footprints across marble floors. 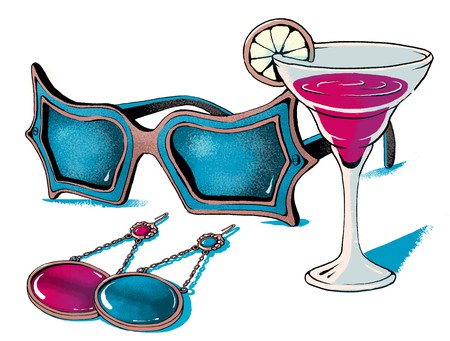 “Everything in Venice is not only beautiful but surprising,” Guggenheim once noted, and this quality clearly seeped into her sartorial sensibility. Accompanied by her hordes of loyal Lhasa Apsos she instantly became a recognisable figure. The private drivers of her gondola were dressed in turquoise to match her mooring polls. She wore bright red tights and fur-lined coats, overly ornate sunglasses and heavy glass earrings. Guggenheim had always had a flair for style but Venice brought out something extra in her; it catered to a theatricality that Guggenheim embodied with ease. She already stuck out from the Venetian high society, why bother hiding? The novelist Mary McCarthy, who was also a friend, saw how Guggenheim seemed to garner a lightness as she got older and settled into her role as unofficial and alternative dogaressa, becoming “fresh and amusing like a naughty child”. At her fiftieth birthday party she wore a Venetian crinoline dress and her guests drank “rivers of champagne”. It’s hard to think how one could not enjoy life like a naughty child when having a cocktail party on the terrace of the Gritti Palace and a palazzo-shaped birthday cake.

Yet despite her love of luxury, Guggenheim often exposed her hatred of the “trumped-up tourist serenades”, and instead recommended her friends to “float through small dark canals… past fondamentas with bistros, where gondoliers assemble to drink wine, past warehouses and closed shops and rats and floating garbage”. Guggenheim loved Venice for all its parts. Despite her splendour, this was the woman who always drank with her two gondoliers and felt so bad for the shivering pigeons in St Mark’s Square that she went every day at noon in winter with “five kilo bags of grain” to feed them. She was unafraid to encounter the city before her as a living thing.

McCarthy recalls being led on a private tour by Guggenheim and her emotions became, “as blazing as the native grappa”. She took McCarthy and her husband to “the small hot squares, the working-class restaurants and dirty churches”. Her favourite church was not the “soap-bubble-domed Byzantine cathedral” of St Marks, but a smaller more modest offering hidden in the Castello area, San Giorgio degli Schiavoni, which Guggenheim loved for “its jewel-bright painted ceiling and radiant Carpaccio paintings”. With its modest white frontage it’s the kind of gem you would miss entirely if you didn’t know which door to open. Venice taught Guggenheim this lesson, the best things were often those that took time to find, the things you had to discover for yourself.