Past, Present And Future In The Art Of Arnaldo Pomodoro

The works of Arnaldo Pomodoro, one of the most important artists of the Italian post-war era, have ranged from small reliefs to monumental bronze spheres. Throughout his career, he has explored themes of time and human development, from archaic writing to space ships. We take a look over his extraordinary career. 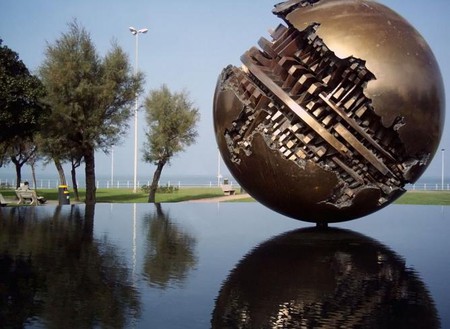 The bronze sculpture on the seafront in Pesaro | © Twice25/WikiCommons

Pomodoro was born in 1926 in Montefeltro before moving to Rimini for his studies. His graduation coincided with the end of the Second World War, and he began his working as a civil engineer in Pesaro, reconstructing buildings destroyed in the war. By the 1950s, however, Pomodoro had begun to move towards more artistic pursuits, studying the lost-wax casting system at a goldsmith’s shop and expanding into art circles in Como and Milan, meeting artists such as Mario Radice, Manlio Rho and architect Ico Parisi. His interests ranged from sculpture to theatre and literature, reflected through the way he conceives of his work in terms of writing, as a language of its own.

While living in Milan, he began to produce exhibitions and theatre productions. He mainly produced reliefs, such as La luna il sole la torre (The moon the sun the tower) in 1955, and Il giardino nero (The black garden) in 1956. Works from this period are formed from materials such as silver, brass, lead, cement, copper, and tin. La luna il sole la torre and Orizzonte, 1956, I (Horizon) appear to be aerial shots of city plans, surrounded by barren land. The materials evoke futuristic, and metallic cities, while the forms themselves are evocative of ancient civilizations of amphitheaters and open-air inner courtyards. The fossilized quality of Il giardino nero is perhaps evocative of a ruined city, uncovered from volcanic magma. In all of these works, the allusion to an ancient past, and link to the modern world, draws a thread throughout history, creating a continuity in human experience.

The artist’s work shifted after he departed on a self-proclaimed spiritual journey to the United States in 1959. Upon seeing the work of Brancusi at the MoMA, the artist “felt their force with deep emotion, but at the same time I experienced a wish to destroy their perfections.” From this point his work began to grow in size and change in form, to monumental outdoor sculptures. His most prominent series from this period onward were La colonna del viaggiatore (The column of the traveler) and Sfera con sfera (Sphere with sphere).

Pomodoro took the clean, smooth sculptures of Brancusi and reverts them to an archaic state: the sight of the tall, carved columns immediately recalls the ancient obelisks of Egypt and Rome. The perforated and demarcated surfaces of columns such as La colonna del viaggiatore, 1959, I draw upon hieroglyphic and Etruscan script forms near the base while the repeated lines and forms near the top speak more a technological code. La Colonna del viaggiatore, 1965/66, II itself looks like an eroding component of a space shuttle, revealing futuristic signs in one of the most long-lasting markers of human conquest. This allusion to technology and memory is even more explicit in Grande tavola della memoria, 1959-1965 (The great table of memory), which monumentalizes a computer motherboard by forming it out of bronze.

In 1964, Pomodoro exhibited his work at the Venice Biennale, and as his fame grew his works were installed in public locations throughout the world. Today some of his outdoor sculptures can be found throughout Italy, Spain, the USA, and even as far flung as South Korea. In 2012 Pomodoro created Ingresso nel Labirinto (Entrance to the Labyrinth), a life-size labyrinth built into the Arnaldo Pomodoro Foundation: a summation of his life’s work and research, paying homage to the ever-poignant themes of communication, technology, and the human journey.