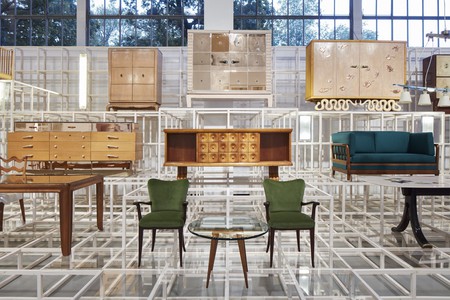 While Italian Modernist master Osvaldo Borsani isn’t as famous as his contemporaries, the 20th-century designer’s prolific career is just as significant. There’s a renewed interest in his work, with a new book and major retrospective paying tribute to his innovative designs, plus the family home, Villa Borsani, is open to the public for the first time.

Italian designers such as Gio Ponti and the Cassina brothers may be on your radar, but you’d be forgiven for never having heard of Osvaldo Borsani, the visionary figure behind influential mid-century furniture brand Tecno. A reserved figure, Borsani became quietly respected for his high-quality functional and pioneering designs that added a new dimension to both commercial and home furnishings. His work was prolific and, such was the breadth of his work, impossible to label. After a hugely successful 30-year career with Tecno, he faded from memory. 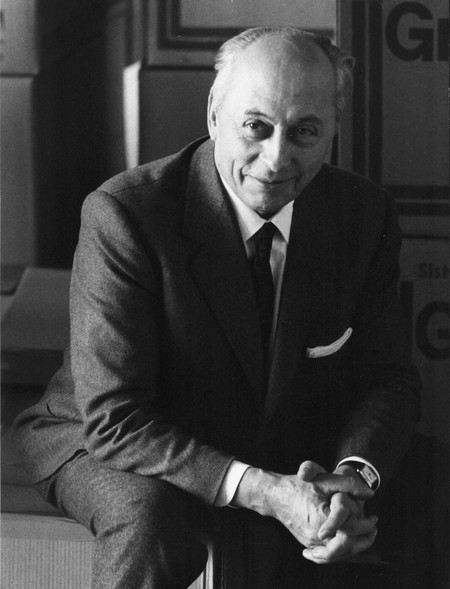 His work is currently the subject of a major retrospective at the Triennale in Milan, co-curated by grandson Tommaso Fantoni, and a new monograph by Giampiero Bosoni for Skira, which sheds more light on the enigmatic designer.

“As the disciplines of design and architecture in Italy have interwoven following a distinctive, Italian pattern, there may be no other figure, anywhere in the world, who we can claim spanned the ‘short 20th century’ with the same breadth of evolution, encompassing design and methods of production, as the architect, designer and entrepreneur, Osvaldo Borsani,” says Bosoni. 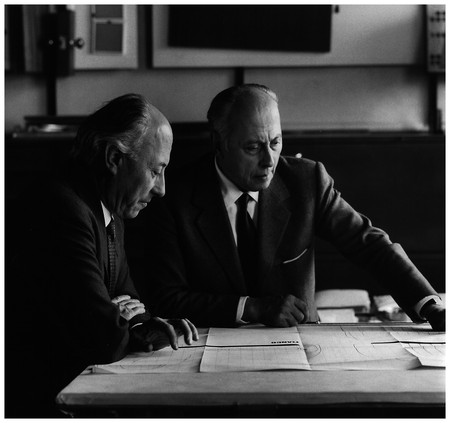 He began his career working with his father, Gaetano, at the family atelier on bespoke Art Deco pieces. At the same time, Borsani was experimenting with Rationalism at the Politecnico di Milano, which eventually led him to found Tecno with twin brother Fulgenzio in the 1950s. Tecno was utopian and futuristic, embracing the social and technological needs of the country at the start of a new post-war era. Another family affair, Osvaldo, daughter Valeria and son-in-law Marco Fantoni were the company’s sole designers until the early 1980s, earning international acclaim for their industrial designs. 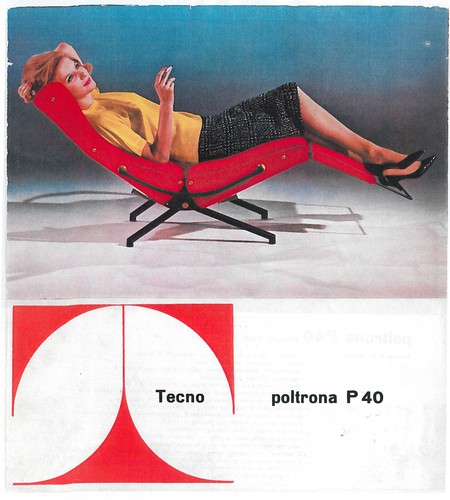 “His work was tremendously important, with Milan becoming a global design district because of designers like him – he brought Modernism to Italy,” says Tommaso Fantoni. “My grandfather’s work encapsulates the very best 20th-century Italian design, from the traditional craftsmanship he learned from his father to the high-tech innovations of Tecno.”

Nothing cements Borsani’s significance in Italian design history more than a visit to Villa Borsani – an immaculately preserved Modernist gem that lies just outside of Milan in Varedo. The house has been in the family since it was built in 1945 and has sat unoccupied for the past five years until now, when the final resident, Fulgenzio’s wife Carla, passed away. 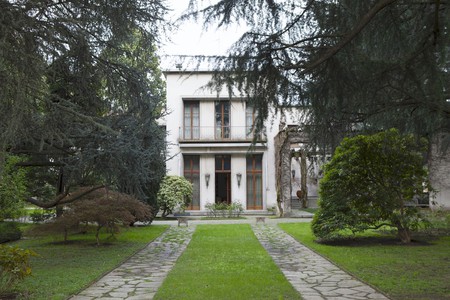 Far from an exercise in Modernist precision, Villa Borsani’s charm stems from its total incoherence, reflecting Borsani’s unique fusion of a styles as he transitioned from his father’s traditional approach to Rationalism. While the plaster and brick Cubist structure expresses typically Modernist traits, the handcrafted timber window frames align with the earlier influences of Frank Lloyd Wright. 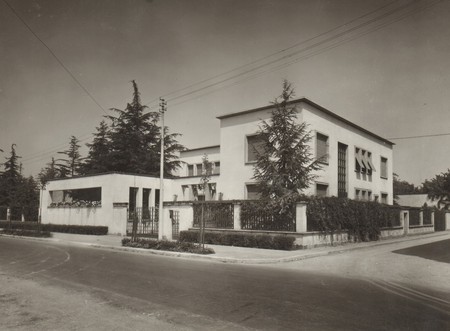 The Modernist villa, which sits in Varedo, was completed in 1945 | © Archivio Osvaldo Borsani

Inside the house Tecno’s most famous designs, the kinetic P40 chair and D70 sofa, are on show. But there are also numerous bespoke pieces that have been crafted by the family’s furniture company, Atelier di Varedo. Previously unseen, the latter are more interesting, offering a real insight into the close-knit family business and again revealing a unique blend of traditionalist and Modernist influences. 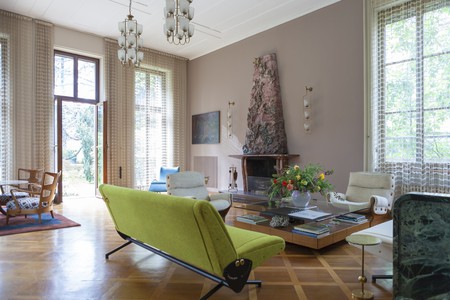 The D70 sofa in the living room | © Mary Gaudin

Borsani’s father Gaetano was a self-confessed perfectionist, and while Borsani acknowledged and inherited his desire for quality craftsmanship, he also brought his own unique pioneering approach to each item. A great example is the conventional-looking yet beautifully crafted Brazilian onyx dining room table that has a secret ‘call button’ underneath to effortlessly alert waiting staff. 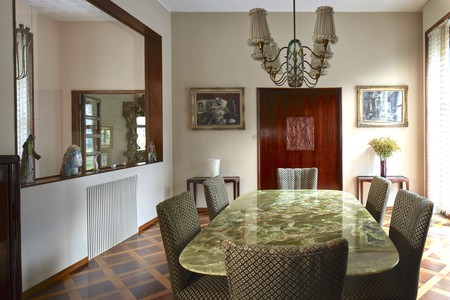 It’s these details that make the house special. It’s hard not to be seduced by the soft pink marble staircase washed with the warm glow from the floor-to-ceiling window and flanked by Murano glass rails fixed with bronze screws. Or the fabulous hidden bar in the basement games room with removable ceramic panels that miraculously reveal a barman on the other side for special occasions. 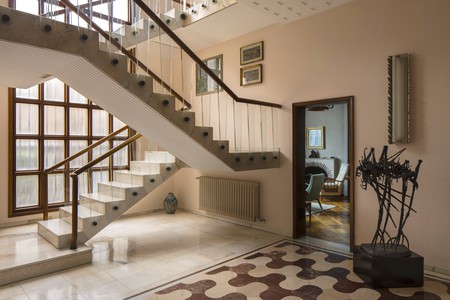 The staircase is the main feature of the house | © Altopiano Studio

There are other innovative details. The bathrooms had underfloor heating – practically unheard of in the 1940s – and the windows were all double-glazed with panes that were hand-rolled in Murano as this was the only way to achieve the thinness required at the time.

It wasn’t just a one-man show. Borsani collaborated with many other creative luminaries, such as Lucio Fontana, Roberto Crippa and Fausto Melotti on designs for the house. Highlights include a ceramic fireplace, portraits and planters created by friend and artist Fontana, plus a brass bedhead in the guest room by Giò Pomodoro. 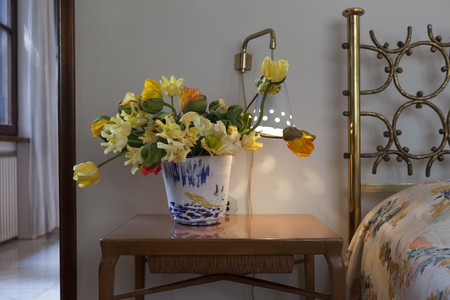 The brass bed frame was made by Giò Pomodoro | © Mary Gaudin

Indeed, it was Borsani’s collaborative nature – integral to the spirit of the times – that lay behind his success. He operated in a period where the creative industry thrived by utilising a network of different professions to drive innovation and discovery. One of Borsani’s key collaborators was Norman Foster, who had been approached by other furniture brands, including Knoll and Alias, but had been impressed by the family operation Borsani had created when he visited Varedo in the 1980s. “It seemed to be the essence of a successful close-knit family enterprise that had prospered on a commitment to design and innovation,” recalls Foster. 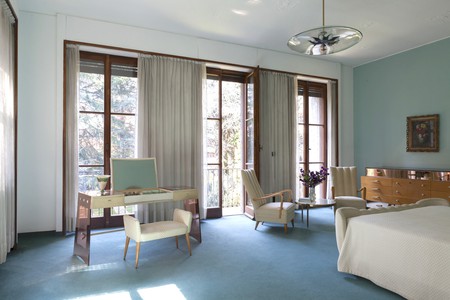 The pair famously collaborated on the Nomos (Greek for “law” or “custom”) table and very swiftly other workplace systems of furniture soon evolved, with Tecno working in partnership with Foster on projects for London’s Stansted Airport, the Carré d’Art in Nîmes and the Great Court of the British Museum as recently as 2003. 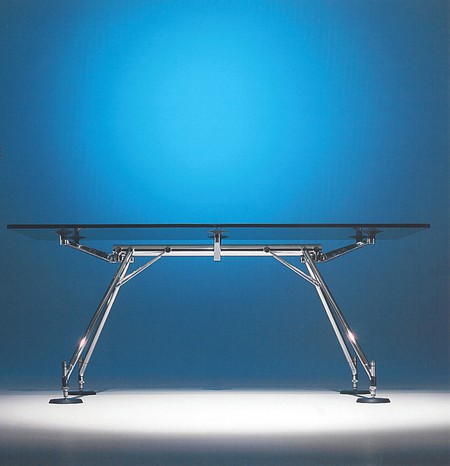 The bond between the two families has remained strong – grandson Fantoni worked under Foster for a decade, often on the architect’s family residences. It seemed only natural that the two would work together on the major retrospective at the Triennale, both wanting to pay tribute to this underappreciated yet heavily influential designer. 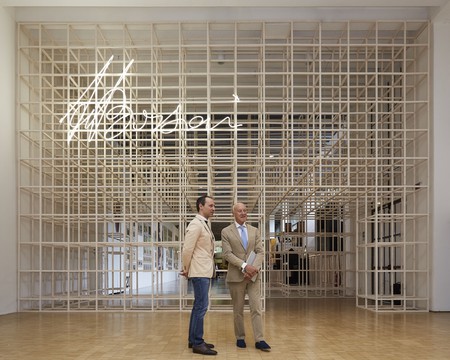 The exhibition, which opened in May 2018, features more than 300 objects from the extensive archive, including both handcrafted pieces and industrial icons to reflect the breadth of Borsani’s work over his 50-year career. Visitors who can’t make it to the villa, which will also be open until September, will have the opportunity to see some of Borsani’s most remarkable collaborations with Lucio Fontana from the period of 1949-1954, highlighting their shared transition from Baroque to Modern. Other standout pieces include the 1960s Graphis desk, one of Fantoni’s favourites, which was radical for being the first modular, all-white office furniture. 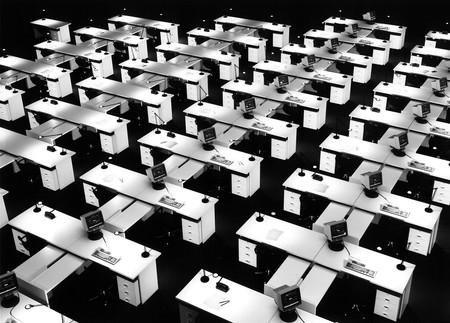 “For me it has proved to be an opportunity to explore the life and times of a talented individual and the remarkable company that he created,” recalls Foster in Borsani’s monograph. “He had created and cultivated an attitude of mind which encouraged craftsmanship and an attention to detail and quality. There are several parallel themes running through this exhibition but for me one of the most important is the nobility and pride in the human touch that lies behind the making of something well.” 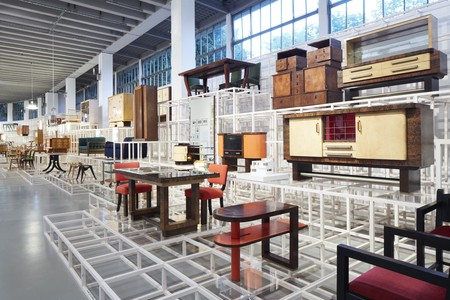 Osvaldo Borsani will run until 16 September 2018 at the Triennale Design Museum in Milan. If you want to visit Villa Borsani, book your tickets here.