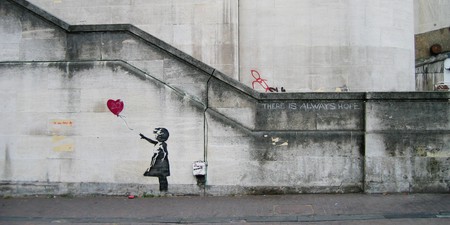 About 150 works by the popular anonymous international street artist Banksy are being displayed for the first time in an independent private exhibit in Rome‘s Palazzo Cipolla museum called War, Capitalism & Liberty.

The exhibition was compiled entirely of pieces on loan from private collections and is said to be in no way affiliated with the artist believed to have been born in Bristol, England in the 1970s.

The exhibition features many pieces showcasing Banksy’s satirical style, works which are characterized by political commentary on issues ranging from modern consumerism and nonviolence to more recently, the Syrian refugee crisis. One of Banksy’s most well-known pieces, ‘Kids on Guns,’ is featured in the gallery, as well as never-before-seen sculptures, paintings and prints. Works featuring everything from Banksy’s signature social commentary to portraits of celebrities line the walls of the gallery in a show that is being called ‘extensive’ and ‘unprecedented.’

The works were compiled as a non-profit exhibition by Fondazione Terzo Pilastro, a foundation that seeks the promotion of cultural development in the Mediterranean region, and said to have taken more than two years to complete. Fondazione Terzo Pilastro president Emmanuele F.M. Emanuele said in a press release that the exhibit is a ‘far-reaching initiative.’

‘This exhibition is, in my opinion, the perfect and natural culmination of a path that I wanted to pave, through the Fondazione Terzo Pilastro, starting long time ago, in order to give voice to a form of expression – the street-art – that takes art out of the museums and shifts it into everyone’s places, making it something belonging to our daily lives,’ Emanuele said in the release.

Banksy rose to prominence in the late 1990s with his stylized stencil and graffiti work appearing throughout Bristol and London. His artwork has often caused controversy, with opinions on his collective work varying from mediocre vandalism to a leader in modern art. Banksy’s creative displays of his perception of world culture break from the conventional, as he has been known to work with a range of mediums, such as canvas, silkscreen and sculpture in addition to his well-known wall art.

Banksy created a temporary ‘bemusement park’ last summer in Weston-super-Mare, England, called Dismaland. A play on the popular Disneyland, Banksy’s park featured long lines, a decrepit fairy castle and a totalitarian ghost town in a showcase of his own art, as well as that of more than 50 other hand-picked artists with a goal of providing an escape from modern escapism often presented in amusement parks. 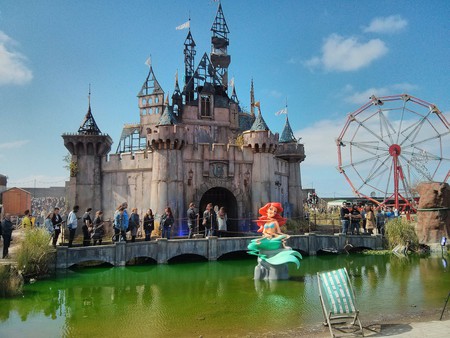 Banksy has been involved in the curation of several smaller displays of his artwork in Bristol and Los Angeles, with one exhibit in Bristol in 2009 drawing in more than 300,000 visitors. However, the War, Capitalism & Liberty exhibit is believed to be the largest Banksy exhibit of its kind to be put on in a European gallery.

‘The exhibition is a unique opportunity also for the themes that it deals with – war, capitalism and freedom – that seem to be both the primary sources of inspiration of Banksy’s art – characterized by a strong component of social protest – and the most current and urgent themes characterizing our present,’ Emanuele said in the press release.

War, Capitalism & Liberty is open to the public Tuesdays through Sundays for €12 through September 4.