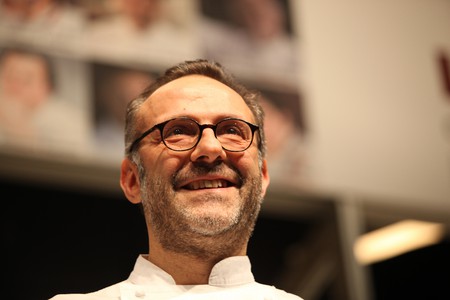 Osteria Francescana, a tiny, 12-table restaurant in Modena, Italy, was awarded the number-one spot atop The World’s 50 Best Restaurants list in 2016; it’s currently in second place on the worldwide list, and is still ranked as Europe’s best. It might seem an obvious choice at first glance: A restaurant in the most food-centric region of a country known for its cuisine, with a chef/owner who’s apprenticed with Alain Ducasse at the Hotel de Paris in Monte Carlo and with Ferran Adria at El Bulli. But for Massimo Bottura, the energetic and charismatic chef and owner of the 22-year-old restaurant, it’s been a long and challenging journey to the top.

These days, he’s known for avant-garde dishes with whimsical names like “Oops! I Dropped the Lemon Tart” and “A Potato Waiting to Become a Truffle,” which incorporate the flavors and ingredients native to his home region but present them in innovative ways. He cites art and music, especially jazz, as major influences on his cooking. “Deconstructed” is a word often applied to his creations.

Bottura grew up in Modena, which remains his home. Like many Italians, he learned to cook in his mother’s kitchen, making traditional dishes like tortellini. He attended law school but never pursued that track, instead opening his first restaurant, a trattoria. He was making simple, classic Italian food at that point; Emilia-Romagna may be the “breadbasket” of Italy and the source of Parmigiano cheese as well as Parma ham, but it’s a region where traditions rule and creativity is actively discouraged. The “best” food, as traditional wisdom had it, was that cooked at home by one’s grandmother in accordance with recipes handed down over generations and centuries.

One day he got a call from Ducasse, asking him to come work with him; Bottura moved to Monte Carlo without a second thought. It was there that he began looking at food differently; resolving to start shaking up people’s thoughts on what food should be. It’s where, one day, a cook dropped a lemon tart and Bottura saw the result as beautiful, something to be intentionally replicated on a plate.

“After all the time with Ducasse, I felt I needed to do something different,” Bottura says on Chef’s Table. “It was so important to me to learn, to evolve. So I decided to create a new cuisine out of the classic traditional food of Modena.”

Bottura returned home to Modena, bought Osteria Francescana, and began to create,making dishes that were modern twists on those he recalled from his childhood. Among the first was a tortellini dish—rather than serving them en brodo, he spaced six tortellini in a line on a plate; he called it ”Tortellini Walking Into the Broth.”

But his fellow Modenese didn’t quite understand what he was doing. As his wife, Lara, puts it, the notion that regional ingredients could be used in ways different from what people were eating at home was threatening to the locals. “Can you imagine what the locals were thinking about us? They wanted me dead. ‘You cannot mess with grandmother’s recipe!’” Bottura tells Chef’s Table. “With this dish, I was saying that tradition, most of the time, doesn’t respect the ingredients.” The tortellini dish got badly panned by the most important local critic; the restaurant suffered. Bottura, discouraged, thought about closing the restaurant entirely.

Then, as legend has it, one day the most important restaurant critic in the country happened to be driving through the area and got stuck in a traffic jam; he ate dinner at the restaurant and published a rave review a few days later. The word started getting out. By 2002, Osteria Francescana had gained the attention of the Michelin guide, earning a star; by 2012, it had earned a third Michelin star, the organization’s top accolade. The restaurant entered the 50 Best Restaurants list in 2009, at number 13, and it took only seven years to rise to the number-one spot—the first restaurant in Italy to do so.

Now, he’s internationally renowned for his re-engineered takes on nonna’s classics. “His cooking is both a love letter to his country and an overthrow of the rigidity that can hold it back,” the New York Times declares.

“Our traditions root us in a place, culture and time, but they must never be stagnant,” Osteria Francescana’s website affirms. “Traditional food is the result of a successful experiment. We must continue to evolve our palates and our techniques and remain flexible in the kitchen to new ideas, ingredients and concepts.”